A guide to: Automotive brands in esports – Esports Insider 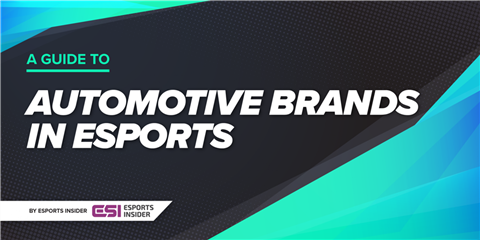 In recent years automotive brands have become increasingly prevalent in esports. More and more, car manufacturers race toward partnerships that aim to inspire gamers to visit their local dealers.

To help keep track of it all, we have compiled a list of automotive brands in esports and their activations.

Note: Companies are listed in alphabetical order. This list will be updated periodically.

Esports partnerships: In may 2020, Aston Martin made its esports debut in The Race All-Star Series — Powered by ROKiT Phones, taking home first place in the sim racing Pro Cup.

Esports partnerships: Audi made its leap into esports by partnering with Astralis Group in February 2017 and sponsoring the Danish Counter-Strike: Global Offensive team. In January 2019, Audi joined as principal partner of Astralis Group’s League of Legends franchise, Origen, and in December 2019 partnered with Future FC, Astralis’s FIFA brand.

Audi’s official Formula E factory team, Audi Sport ABT Schaeffler, briefly crossed over into esports during the COVID-19 outbreak. The series, which is run on rFactor 2, was part of Formula E’s fundraising partnership with UNICEF.

Esports partnerships: BMW has been active in the esports space for several years, first by sponsoring the 2017 EU League of Legends Championship Series Summer Finals in Paris. The auto giant sponsored its first esports team in 2019 with Cloud9, followed by Brazilian organisation paiN Gaming.

BMW expanded its global reach in 2020 by partnering with Fnatic, FunPlus Phoenix, G2 Esports, and T1 Sports & Entertainment. The unusual move was part of a #UnitedinRivalry campaign that saw all teams playfully mocking one another on social media.

Esports partnerships: Cadillac was named the exclusive automotive partner of TSM in January of 2021.

Esports partnerships: In 2019, Ford launched the Fordzilla brand to house its first-ever esports competitors in Forza Motorsport 7 and other racing titles. The brand revealed a new virtual race car in August 2020 called the Fordzilla P1.

In 2020, Ford became the presenting sponsor of the Rocket League Championship Series X Winter Majors in 2020, and for the RLCS X Winter Split in 2021.

In November 2020, Honda targeted esports fans by becoming the first automotive brand to reveal its latest car on Twitch. The 2022 Honda Civic was unveiled on Honda’s official gaming channel, Head2Head.

Kia also became the main sponsor of the League of Legends European Championship (LEC) in 2019. The brand must have enjoyed its ‘test drive’, because this partnership was renewed for the 2020 and 2021 seasons.

Esports partnerships: This luxury car brand has licensed its cars for video games in the past but ventured into esports in July of 2020 by forming its own esports series called ‘The Real Race‘ in collaboration with the video game Assetto Corsa Competizione.

Esports partnerships: UK-based McLaren has been active in sim racing for many years, partnering with Logitech G for a number of events and activations. McLaren Seoul entered esports in 2020 as the official partner of Korean organisation DragonX.

Esports partnerships: Mercedes-Benz is no stranger to esports, first entering in 2017 with ESL — a deal the two parties extended in 2020. The brand also signed an agreement with the Chinese League of Legends side Royal Never Give Up (RNG), and launched its own team in the F1 Esports Series.

In April 2021, The Polish branch of Mercedes-Benz inked a partnership with Polish esports org Illuminar Gaming and is now the title sponsor of esports and gaming venue ESPOT Gaming Concept (now named ‘ESPOT Powered By Mercedes-Benz’) in Warsaw, Poland.

Esports partnerships: In 2019, the UK arm of Mitsubishi Motors hosted an online competition among gamers to design the ‘ultimate esports vehicle’ in a ‘Truck King Battle’. The result was the L200 eSports Concept, a truck outfitted with a pair of driving rigs in the bed area of the pickup, complete with curved LED screens and Logitech G920 wheel, pedals and shifters, along with a racing seat.

In 2019, the brand partnered with Hamburger SV‘s esports division. The Porsche Centre in Hamburg joined forces with the Bundesliga club’s FIFA team, with room for expansion into other games.

Esports partnerships: Toyota was a launch partner for Activision Blizzard’s Overwatch League in 2018, and in that same year announced the Toyota Masters CS:GO Bangkok, the first international Counter-Strike: Global Offensive tournament in Thailand.

In 2019, Toyota became the BLAST Pro Series’s first car partner by sponsoring the tournament in Moscow. Then in 2020, the Southern California Toyota Dealers Association, which comprises 59 dealerships in the region, partnered with Immortals for ‘prominent logo placement’ on the team’s LCS jerseys and to be the team’s official automotive partner. The partnership was renewed for 2021.