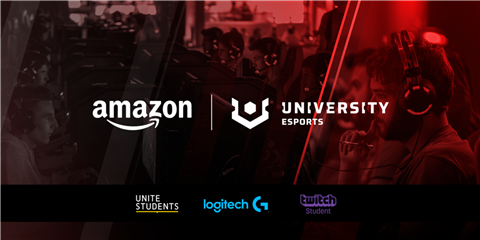 Following AUE’s expansion, students in Germany, France, Spain, Italy and the United Kingdom will take part in its Spring season. According to the release, the series is also expected to expand into Poland and the Nordics in the coming months.

RELATED: Amazon University Esports launches with GGTech and The NUEL

GGTech Entertainment, one of AUE’s founders alongside The NUEL and Amazon, aims to use this expansion to continue promoting the growth of European university tournaments.

Over 3000 students from 91 universities are competing in the UK’s Spring season of Amazon UNIVERSITY Esports, which started in February, in games such as League of Legends, CS:GO, VALORANT and Rainbow Six Siege.

The finals will be broadcast live on Twitch from March 29th to April 1st, with the last Winter season of AUE in the UK attracting over 1m tournament broadcast live views.

The expansion follows on from the University Esports Masters, a pan-European collegiate competition, announcing major changes to its 2021 edition in February. A total of 30 teams across 14 European nations are expected to compete, with a €15,000 (~£13,158) prize pool on the line. For the UK, one team will qualify through NUEL’s Amazon University Esports League of Legends tournament.

Esports Insider says: AUE is a fantastic opportunity for university students that want to compete at a high level of esports. The series’ continued expansion into Europe can only mean good things for the future of the AUE, and also the competition’s potential to develop esports collegiate ecosystem.