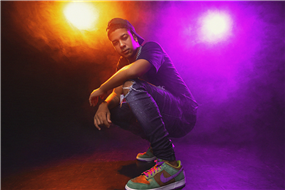 Despite officially signing for the esports organisation yesterday (April 27th), this is not the first time that GUXTA has collaborated with LOUD. In 2020 the rapper launched ‘Zero Farpas’ in collaboration with the organisation. Moreover, GUXTA also debuted ‘Não Cheguei’ which featured LOUD influencers, LOUD Coringa and LOUD Mob.

Bruna Alvarenga, LOUD’s Broadcast and Music Director, commented: “GUXTA is a talented artist who adds a lot with his arrival at LOUD. In addition to inaugurating the music area, it creates an even greater convergence between games and music, which is a trend widely seen in the market, generating greater interest from our audience for this type of content ”.

In the release, the rapper also discussed his dream of becoming an influence for other artists and an example to everyone who had a similar life experience.

GUXTA said: “I haven’t gotten there yet, you know? I want to share all my vision and I am not just talking about material goods. I will make a difference when I realise that I am taking people out of the way of trafficking, changing lives and minds.

“I haven’t arrived yet, but with LOUD it will be very quick to arrive!”

The organisation is present in many esports ecosystems around Brazil, most notably Garena Free Fire and Fortnite. This year LOUD also joined League of Legends’ premier Brazilian competition, the CBLOL.

Esports Insider says: LOUD is a powerhouse in Brazil, particularly within the content creation space, and has a natural connection with the rap scene due to the style of the branding. The signing of GUXTA is a smart piece of business as it allows the organisation to continue expanding its avenues.