The Call of Duty League Minnesota Home Series’s first day saw a major controversy break out during the second match. Between the Atlanta FaZe and Seattle Surge, the series began just like any other. Well, it did start with a bit of a shock, as the underdog Surge went up 2-0 over the favored FaZe. However, immediately after the second map, the CDL made the call to shut down the broadcast due to “technical difficulties.”

This delay lasted for a whole 45 minutes, giving Atlanta some time to settle down after going down 0-2. Many fans in the community find it odd that the CDL experienced such a lengthy delay as one of its most popular teams was on the verge of losing.

What happened between the Surge and FaZe?

This isn’t the first time that the CDL has experienced a technical delay. Since the format has moved online, there are bound to be issues with the broadcast. Along with this, the players need to be organized as well, which isn’t always easy.

In fact, we saw another controversy with FaZe and that exact issue. Back at CDL Florida, a London Royal Ravens player went to get a water bottle, and the match between Atlanta and London began without him. London pleaded with the league for a reset, but this was not given to them and FaZe won the map and series.

This time around, fans are even more irate with the CDL and Atlanta. A technical delay rarely, if ever, lasts for 45 minutes in the middle of a match, online or not. However, what stands about this matter is the timing of it. Seattle, a true underdog, was up 2-0 and on the verge of eliminating Atlanta.

The elimination and the escape!!!

@Cellium makes the perfect play for @ATLFaZe to seal the 3-2 win over the @SeattleSurge!#EZAF | #CDL2020 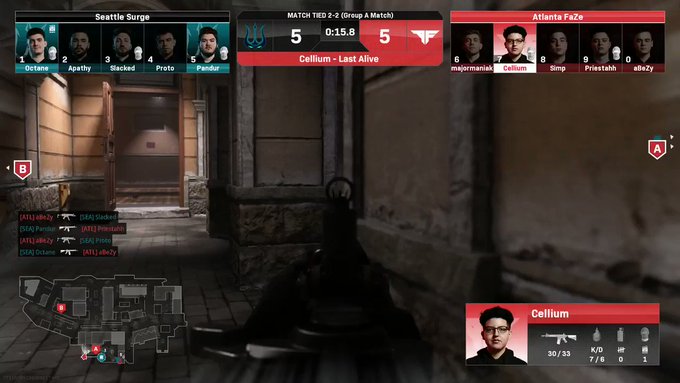 Of course, FaZe is one of the Call of Duty League’s most popular teams, and some argue ratings would drop if they were to lose their first series. So, the (conspiracy) theory is that the CDL let FaZe reset with a 45-minute break to try and keep them prevalent in the tournament. This clearly helped FaZe, as they went on to win the series 3-2.

While some of this theory adds up, Seattle still had three opportunities to win the series. It’s true that the team’s momentum was hindered, but that doesn’t excuse losing three maps in a row.

What do you think of the controversy? Let us know, and keep up with Daily Esports for all CDL news.