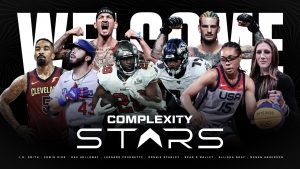 Justin Kenna, CEO of GameSquare Esports, spoke on the announcement: “We are launching Complexity Stars with huge names in sports and entertainment. Complexity Stars provides a platform for professional athletes and celebrities to connect with gamers in an authentic way.

“We are excited to launch Complexity Stars with its founding members and we look forward to adding more athlete and celebrity gamers to build the platform. Gaming is the core of Complexity Stars and an incredibly engaging way to connect gamers, athletes, and celebrities, authentically.”

“There are amazing opportunities to collaborate with global talent through compelling content and tournaments that appeal to brands seeking to connect with the large, affluent, and growing gaming audience.”

Esports Insider says: By launching a celebrity division, Complexity is presumably looking to tap into more mainstream audiences. While this seems like a smart move, the recent case of UK-based company Celebrity Esports shows that establishing a celebrity-driven segment needs to be executed correctly. It will be interesting to see what initiatives are in place for Complexity Stars and how the division operates when it comes to activations between its roster of talent.