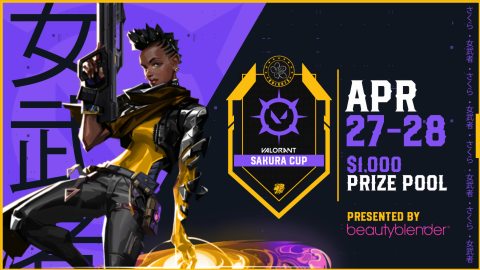 According to the release, Beautyblender has signed on to sponsor the tournament’s first split. The partnership also marks the makeup brand’s first venture in esports.

Knights President James O’Connor spoke on the partnership in a release: “We’re thrilled to launch this partnership with Beautyblender. We love seeing new brands enter this space – and we know esports fans love to see the support as well. And Beautyblender supporting women in gaming with this Sakura Cup is especially impactful for the community”.

Rea Ann Silva, Beautyblender Founder and CEO, commented: “At Beautyblender, we’re always trying to stay ahead of the digital forefront and look at different channels where we can educate new users about our products. Since my company is female-run and self-funded, I love exploring opportunities that support and empower women.

“We’ve been navigating the Twitch and esports space but were waiting for the right partnership, and the VALORANT women’s series is the perfect fit.”

The recently rebranded Pittsburgh Knights also previously partnered with PNC Bank to launch the ‘Women in Esports Steering Committee‘ initiative, which aims to develop actionable solutions for gender equity disparities in the esports industry. Earlier this month, it was revealed that the partnership was extended through to 2024.

Esports Insider says: Partnerships with well-known beauty brands, such as Beautyblender, have the potential to help pursue diversity in esports and inspire more girls and women to enter the space. As such, it’s good the see the company joining the likes of Johnson & Johnson’s Carefree, L’Occitane,  Benefit Cosmetics, and Sephora by stepping into the sector.