G2 Esports and Rogue take to the Rift to secure a spot in the 2021 LEC Spring Split Finals.

Two of the biggest European League of Legends teams in the LEC went head-to-head today. G2 Esports and Rogue had the opportunity to redeem their previous losses and make their way to the LEC Spring Split Finals. Both teams had a phenomenal Spring Split, with many fans predicting them meeting in the Finals. However, the MAD Lions defeated both of these teams in the Playoffs and made the Finals for the first time in their history. They’ll be waiting until tomorrow, looking to take the crown from the winner of this series.

Rogue sought to do the same; to secure a place in the Finals for their first time. Meanwhile, G2 Esports was looking to gain momentum and re-establish the dominance of European superteams. With Wunder back on the Solo queue grind, things looked very intense moving into this match. 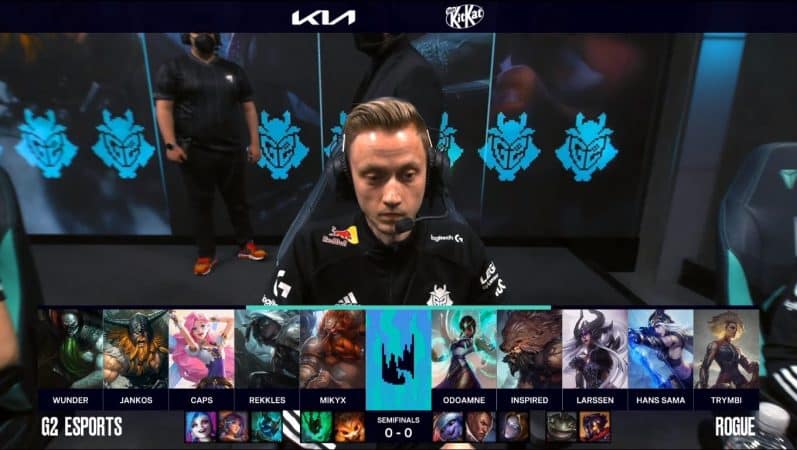 The drafting phase for Game One went very well for G2 Esports. They managed to secure strong picks like Senna, Seraphine, and Olaf, which secured them both good early and late game power. Wunder quit tank duty and switched to Urgot, which he used to bully Odoamne’s Karma in lane to gain an early advantage. However, the early game was very calm. During it, Inspired gained a monumental lead on Jankos in the jungle. He completely outpaced him, killing the first two dragons and Rift Heralds and picking up First Blood on Wunder in the top lane.

Moving into the mid-game, Rogue actively pressured G2 Esports with their lead and gave them no opportunities to come back into the match. G2 traded the third dragon for a mid-tower while RGE pushed their lead further. After that, a teamfight broke out in the mid lane where G2 took the charge of the fight. At first, it actually looked good for them. But Larssen’s Syndra had a fantastic position to land a stun on four members of G2 Esports, which changed the whole outcome of the fight. After losing that fight, Rogue had a massive lead and it was almost over for G2. They needed a miracle to come back into the match.

A brilliant Baron dance by G2

At 25 minutes, G2 found a crucial pick onto Trymbi. Afterward, G2 Esports went straight for the Baron and forced Rogue to challenge them in the pit. Not having enough vision around the area, Rogue stepped into a trap and G2 turned instantly. They took down every single Rogue carry and secured themselves a Baron buff.

It was a major turning point for the game. Soon after, G2 also grabbed an Ocean Dragon too. This stopped Rogue’s Soul and meant G2 had so much sustain paired with the Serpahine and Senna combo. After that point, G2 Esports controlled the tempo for the rest game and comfortably scaled into the late game, where their actual strength resided. Eventually, they gained more Ocean Dragons, but Rogue attempted to rush Baron. While Rekkles secured the third dragon himself, G2 Esports called the enemy’s bluff and forced another team fight. They slaughtered Rogue in the river and used the opportunity to end the game and claim the first Nexus of the series. 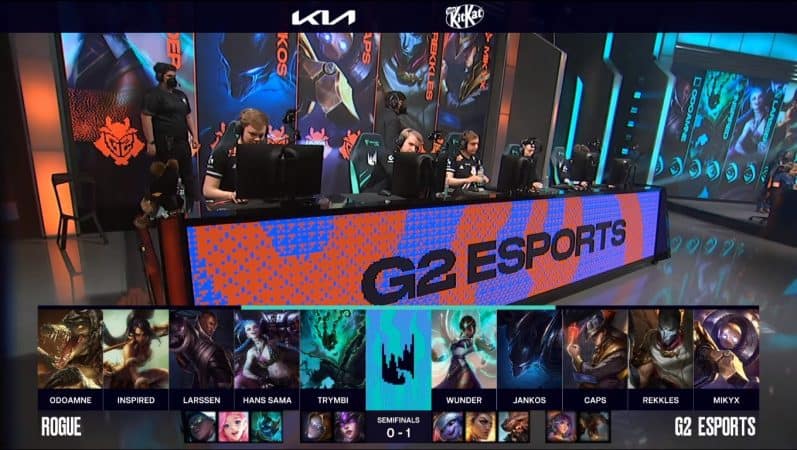 The Nocturne pick came as a surprise to many fans in the drafting phase. To add to the surprise, Hans Sama picked up the Jinx, which was the first-ever appearance of that champion in his hands. The match started similarly to Game One, as Wunder got caught by Inspired and Odoamne, leading to First Blood. However, unlike last time, G2 Esports made proactive plays into the bottom lane and caught the likes of Hans Sama with the help of Mikyx’s beautiful hooks. Having two global ultimates on the side of G2 meant that they could rinse and repeat the bot lane gank formula and get free kills on the enemy bot lane.

After a few skirmishes of trading champions and objectives, a team fight broke out in the bottom lane. That team fight started in favor of Rogue as they managed to bring down the key carries of G2 Esports’ health bars. However, a very good hook from Blitzcrank made a small opening for G2 Esports, but Inspired stopped the situation from escalating on his Nidalee, and he won the team fight for the team. Then, an array of small team fights happened, and Rogue was continuously taking the game away from G2. They secured three elemental dragons and the Soul dragon was in contention for both the squads.

Rogue played the same Baron dance mini-game with G2 this time. However, an excellent shot from Rekkles’ Jhin Ultimate made it very easy for him to snatch the Soul dragon from Rogue’s hands. In response, Rogue angrily chased down the G2 champions and took down almost everyone in the enemy squad. Despite the steal, Rogue won the fight and collectively pushed through the bottom lane to collect their first win, equalizing the series. 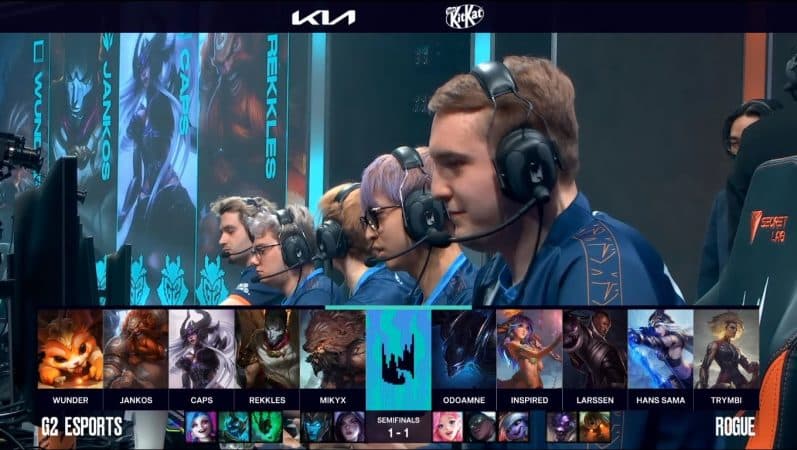 The Nocturne has apparently become the talk of the town, as Rogue picked it up for their top lane in Game Three and denied it from G2. The drafting was very strong for both the teams, and as expected, it turned out to be a bloodbath in the early game. Al level one, Rekkles was caught out in his jungle, where he had to insta-Flash the engage from Trymbi’s Rell. Mikyx also expended his Flash to put some damage on the enemy AD Carry. However, knowing G2’s bottom duo had no Flashes, Inspired started the top blue-side jungle and quickly made his way to the bottom lane to easily dive onto the support for First Blood.

After a matter of seconds, Caps was harassing Larssen with his heavy poke damage and both of them were dangerously low in the lane. A quick visit from Inspired into the lane made sure that Caps had no way of escaping with his life. In this fight though, Jankos made sure the Rogue mid laner got shut down as well. Another tower dive under the bottom tower gave G2 Esports another kill to neutralize the lead quickly. There was a bit of a hiatus for the spectators, as both of the teams looked to secure dragons and Rift Heralds to push their leads. But another dive was set up by Rogue on the enemy bot lane, where they secured two additional kills. Furthermore, Rogue looked to further advance their lead in the match by forcing a fight and trading their top laner in return for two from G2 Esports.

Things were looking very grim for G2 Esports and they wanted to take fights near objectives, but Rogue was way ahead of them. They punished their desperate attempts to fight and brute-forced major objectives. Of course, they convincingly won team fights to take down G2 Esports in Game Three, taking the series to the match point. 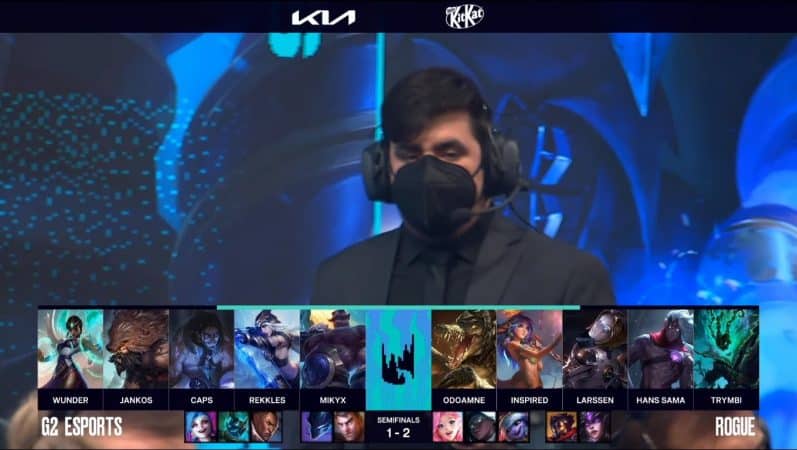 Coming into Game Four, it was do-or-die for G2 Esports. To start, Rogue was playing aggressively right off the bat, beating them in the early game. Because of this, Jankos ganked the mid lane and secured First Blood for Caps. However, G2 Esports pushed their luck a bit too far in the river, so Rogue collapsed on them. They had to sacrifice three members of the team, whereas Rogue left the fight unharmed. G2 got their revenge when they went for a dive on Hans Sama in the bottom lane, but it went utterly wrong as a five-person stacked Rogue roster collapsed on the play. G2 had no escape. As a result, Rogue took down four more kills at the cost of only one champion of their own.

Now, all of the pressure was on G2 Esports to come back into the match. They tried to gank the enemy AD Carry in the top lane, but all was in vain, as Rogue promptly responded to the gank and made a disadvantageous situation for G2 Esports. After Rogue secured even more kills to their name, G2 Esports found it very difficult to come back into the match. Eventually, Rogue started up the Baron, challenging G2 Esports to contest them. G2 Caps got his opportunity and jumped into the pit with his Sylas, but there wasn’t anyone able to support to him. As a result, Rogue got another kill and walked away with the Baron buff.

It was all over for G2 Esports at this point but they tried desperately to hold the fort down. With an amazing Orianna Shockwave from Larssen, Rogue secured a pick onto Rekkles, and a kill on him meant that Rogue won the final fight. Taking down the final Nexus in front of them, Rogue secured their first-ever Grand Final appearance. Riding high from this victory, they’ll take on the MAD Lions tomorrow for the 2021 LEC Spring Split title and Europe’s spot at MSI.