FlyQuest had the tough job of taking on Top Esports in its 2020 Worlds debut. 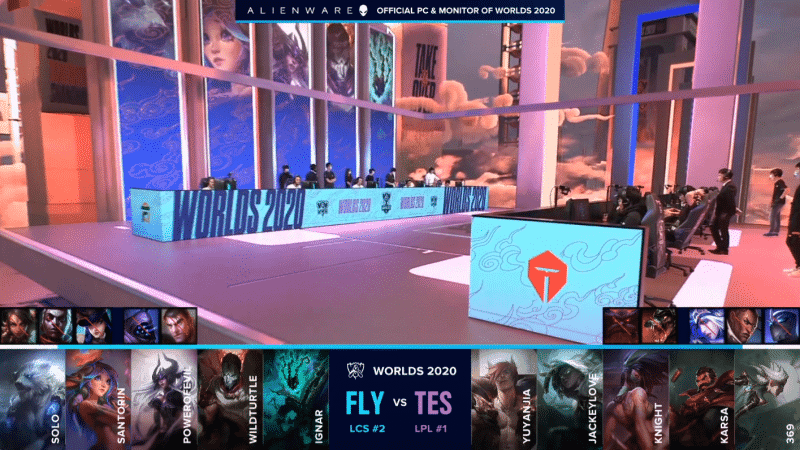 The Group Stage opened up with a pretty brutal display of skill from Top Esports (“TES”), who dominated FlyQuest (“FLY”). Their seemingly inevitable snowball started in the top lane, as 369 solo killed opposing top laner Solo. After that, Karsa ganked top to get 369 another kill and propel him further ahead. TES didn’t give FLY a moment to breathe either, as at six minutes, they made plays in the bot and top sides of the map to kill IgNar and Santorin, respectively.

FLY attempted to claw back some gold by killing Knight in the mid lane, but they barely couldn’t and lost two to TES instead. Shortly after this, Karsa went top once more to kill Solo himself then drop the Rift Herald for the First Tower bonus. During the next few minutes, TES was accumulating dragons and towers across the map, ballooning their lead more and more. At an early 23 minute mark, TES won a team fight two-for-zero and claimed the Ocean Soul.

Things looked very bad for FLY now. TES was in the driver’s seat and they knew it, so they took a stab at Baron. FLY did contest, and to their credit to put up a decent fight there, but TES eventually edged them out and secured the buff. Their first siege netted them multiple towers and two Inhibitors, though FLY managed to get a couple of kills to stall them a bit. Unfortunately, it wasn’t enough, as TES baited FLY to fight them at Elder. Here, they slaughtered three FLY champions before pushing the base and destroying their first Nexus of the tournament.