Wizards of the Coast has revealed a new Godzilla-themed Secret Lair coming soon to Magic: The Gathering, which will hold five premium basic lands. The Secret Lair Drop Series: The Godzilla Lands set features the massive kaiju on the five basic land types. This announcement follows the Godzilla Series Monster partnership Wizards made with Toho Co., LTD for Ikoria: Lair of Behemoths.

The King of Monsters is now the king of lands! #MTGSecretLair The Godzilla Lands will also include a code that redeems for a card sleeve on @MTG_Arena. Preorders begin May 7 at 9am PT. 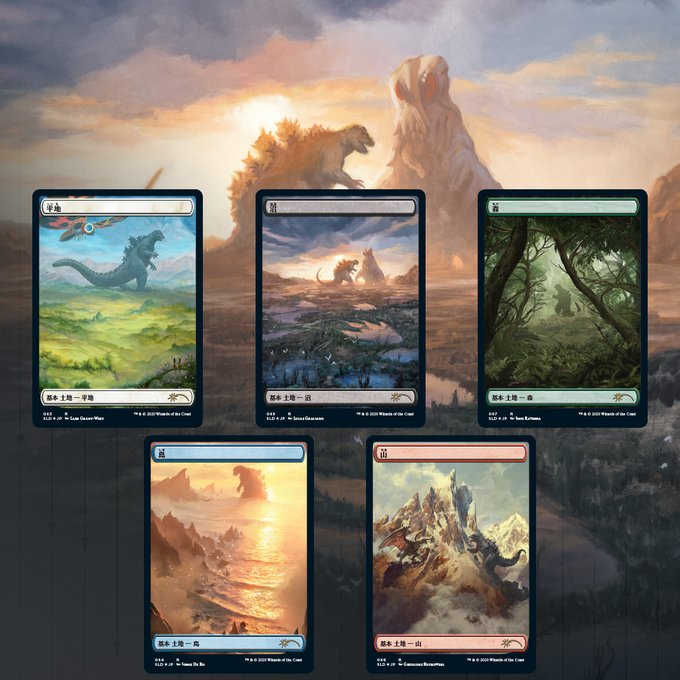 Wizards of the Coast also broke down the art direction of each land in the blog post. The descriptions reveal the intent that Wizards looked for when commissioning the artwork. For example, with the Island artwork done by Jonas De Ro, Wizards described the mood of the land as “a beautiful place being drowned in waves.”

For Godzilla himself, Wizards described the scene as, “Give a wide, beautiful landscape shot of an island or coastline area filled with unique natural rock formations. Somewhere in the scene we see Godzilla, King of the Monsters, who’s surfaced abruptly from the seas, roaring, causing the waters to churn up in huge waves that crash over the shores.”

It is definitely worth taking a look at the art directions Wizards gave artists, as well as how each artist was able to capture Godzilla’s glory for MTG.