MTG’s Theros: Beyond Death (THB) spoilers continue to roll out today with the reveal of a powerful creature in the Limited format, Nadir Kraken.

Similar to Wildborn Preserver from Throne of Eldraine, Nadir Kraken takes things a step further by also creating a 1/1 tentacle creature token for every mana paid upon a card drawn. 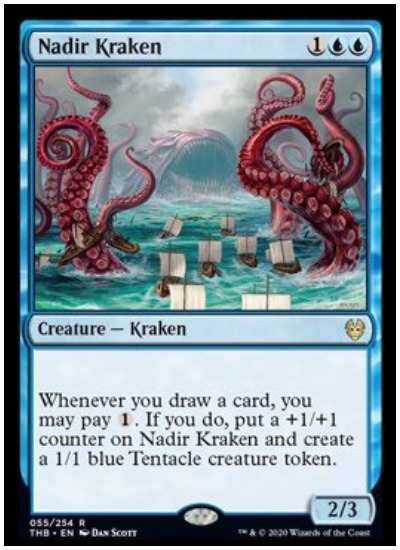 Nadir Kraken is a first pick in a THB Booster Draft since it’s able to gum up a board quickly while gaining +1/+1 counters on itself. It’ll have some potential in Standard Constructed, too.

An Izzet Burn-Draw deck already exists, using The Royal Scions, Improbable Alliance, Irencrag Pyromancer, and Niv-Mizzet Parun. Nadir Kraken could replace Crackling Drake in the deck or be added to the sideboard for aggressive matchups.