The COVID-19 pandemic left traditional sports in the dust, but that doesn’t stop the NBA from moving towards esports. According to Yahoo Sports reporter Chris Haynes, the NBA is planning to host a players-only NBA 2K tournament. Additionally, ESPN will broadcast the tournament.

Esports are gaining more and more attention due to their ability to thrive without live audiences or players. Now, the NBA is taking advantage of that opportunity. Details aren’t completely out yet, but as far as we know, there will be 16 teams participating in the tournament. Each NBA team will have its own representative, most likely one with the best gaming skills.

The tournament will last ten days, starting this Friday, April 3. Some of the players involved include Utah Jazz player Donovan Mitchell and four-time NBA All-Star DeMarcus Cousins. Additionally, these games will require players to compete remotely, as the pandemic social distancing rule applies.

Although there’s no end-in-sight regarding the COVID-19 situation, the big league is determined to keep the basketball spirits high. We currently don’t know what this tournament will look like, but viewers might expect regular commentary, interviews, analysts’ desks, and more. Additionally, this tournament will be separate from the official NBA 2K League, which features real NBA teams and their official players.

Over the past weekend, the NBA 2K League attracted over 77,000 viewers on YouTube and Twitch. Some popular streamers included Troydan, CashNasty, CallMeAgent00, and more. At the moment, the NBA 2K League has postponed the start of their 2020 season, but that doesn’t stop their preseason competitions from happening. 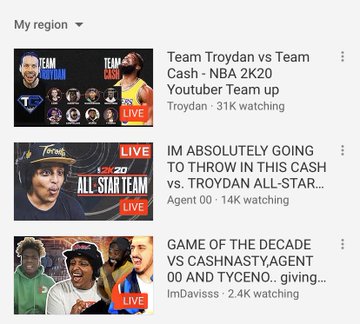 Hopefully, this Friday’s NBA stream attracts just as many viewers, as it would bring much more attention to the esports industry. Another industry taking to esports during these quarantined times is NASCAR. They’ve started the first-ever eNASCAR iRacing Pro Invitational Series, which stars many traditional drivers on a virtual racetrack. On March 22, their first game attracted over 900,000 viewers. Overall, they’ve received great feedback on social media, and the NBA can hopefully achieve the same.

This is the closest these traditional leagues can get to normalcy right now, and it can be a big milestone for the esports industry.