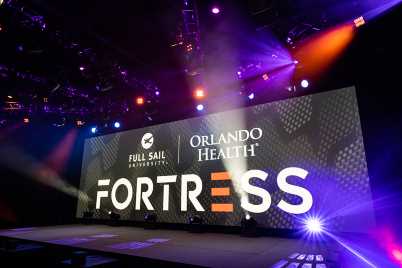 Full Sail University, the Florida-based university that has long had ties to esports, has a new naming rights deal for its gaming arena with healthcare provider Orlando Health. The deal will be announced later this morning, and terms are not being disclosed.

But assets and activation plans include the naming rights, with the arena called The Fortress set to now be dubbed the Full Sail University Orlando Health Fortress, signage, Orlando Health providing a medical team for events and putting its name on a $50K USD scholarship for the university per year, over the course of this multi-year partnership.

Full Sail is a university that focuses on entertainment and media industries and has offered gaming-related degrees for more than two decades. Its 11,200-square-foot arena has hosted esports-related events for NBA 2K and Red Bull among other properties.

The sides will also undertake a joint research project aimed to better improve and understand how and why gamers perform well. Orlando Health, which owns 15 hospitals, employs about 22,000 people and is more than a century old, also has sports marketing deals with Orlando City SC, the Orlando Pride, UCF athletics and the Arnold Palmer Invitational. Marketing agency 4Front assisted the sides in negotiating the partnership.

Orlando Health Corporate Director of Sports Partnerships Jackie Hayter said that the company bought the naming rights to the arena because it is a believer in both being active in its local community as well as a believer in esports. She said: “We are both entities that can compete certainly on the international and global level, but community is super important to us. … I don’t think we necessarily went into this partnership with a data point in mind (for how to judge a return on investment); we went into this because Orlando Health really believes in esports and that it’s going to be a huge part of the future of sports competitions.”

Orlando Health will provide a primary physician and an upper-extremity orthopedic surgeon to service gamers in need of medical attention and care. On top of hosting external events, Full Sail has its own esports team, the Full Sail Armada, and the university invested $6M to build the arena when it opened in 2019.

Full Sail University Executive Director of Strategic Partnerships Josh Mora said Orlando Health was always a top-of-mind candidate when the university decided to sell naming rights, in part because it already knew leadership from the company through past relationships including serving together on the Orlando Sports Commission. The arena and its staff have been helping facilitate virtual gaming events during the pandemic but are hoping to get back to in-person events soon.

Mora added: “Over the past four to five years, we’ve established ourselves as one of, if not the, premier brands in collegiate esports, and we wanted to be sure we found a partner who reflected how we’ve been able to grow very rapidly and help us in the next few years. Because of their outstanding resources, especially in healthcare and sports … it was a very natural fit for us.”

Editor’s note: This story was updated with further information on the terms of the scholarship and changed the use of “school”  to “university.”