Ross Video’s Business Development Manager for Esports, Phil Englert, writes for Esports Insider to discuss LAN events and what has been missed with remote productions. 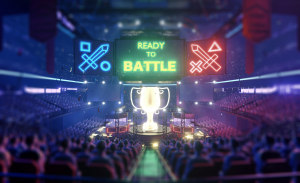 This article has been provided by Ross Video and is edited by Esports Insider.

The past year and a half have brought monumental change for everyone.

Due to the pandemic, everyone dove deep into their caves of solitude with only the blue light from monitors connecting us. The world switched to everything remote and the esports industy demanded great innovation to continue. Many, like the Ross Production Services team with its Ross Production Cloud system, were able to continue delivering esports content to fans without skipping a beat.

Alongside the industry’s innovation and growth, everyone had to grow as people and professionals. Originally, the thought of directing a production in a bathrobe from my room was awesome. The sweet comfort and control of my own office was refreshing, and the stress of the live environment changed from, ‘are we going to capture the story in time?’, to ‘is my internet connection going to bring the show crashing down around me?’

Ultimately, we all adapted to this temporary reclusiveness and made the most of the situation.

Now, it seems that the long-awaited return to ‘normalcy’ is on the cusp. Remote productions, although impressive and innovative, are still missing something and I find myself daydreaming of LAN events from the past.

Everyone in the esports community remembers their first big LAN event – the live spectacle and dazzling environment that blew their mind and made esports tangible and real. The power of seeing competitors with your own eyes and the unbelievable Disneyland-quality sets and stages awakened a passion in me that was unlike anything I had felt before.

It’s not just the game or the competition; it is the complete experience that ropes people in and engulfs them with a flame of fulfilment. The cohesion between the game and the real world created a balance of non-stop stimulation. The flurry of sensory overload and the energy of competition radiated through the venue. The colours and dynamic graphics on LEDs paint stadiums into a work of art.

Beyond the spectacle is something even more powerful: a shared experience between people with the same passions and interests.

The energy that is built with all the fans in the stadium, and the excitement of everyone feeding off each other, is almost euphoric. This joining of the gaming community is what makes LANs so important, as it enables people to share a love for gaming in a collective space. It creates common ground and brings everyone together as people.

This is what’s been missing during this past year of quarantine, and we are so close to returning to the big stage and recapturing that energy.

So, I urge everyone to keep the hope alive and set sights on the horizon. People may no longer need to daydream of LANs when we return to the stands, the control room, or the main stage with the roar of the crowd to bind us all.