When I was a kid, I'd play video games on the couch with my legs propped up on the coffee table. If I was ever wearing shorts, I'd have a clear view of both the screen and my bare knees. And you know what? There have been multiple instances over the years when I saw a character, looked over at my knee, and said "wow, that guy looks a lot like my knee." 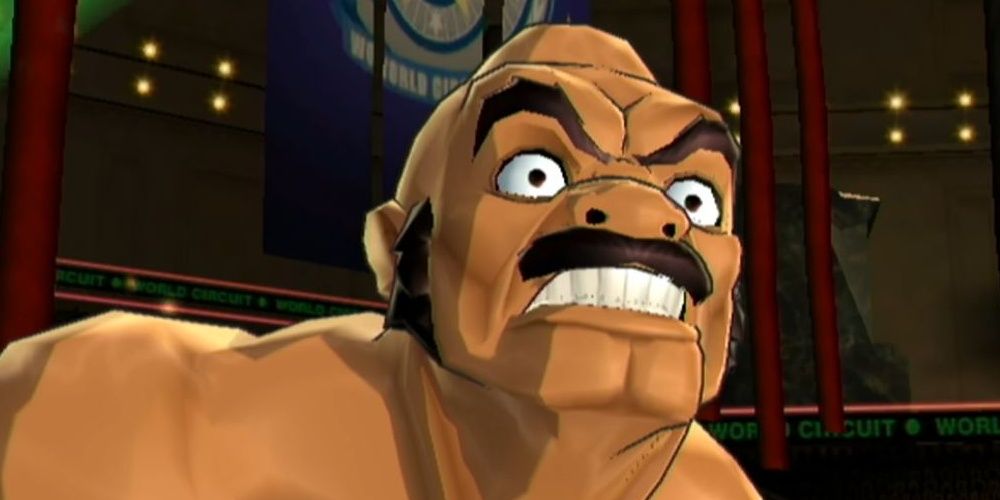 You know how, when you're a kid, your kneecap is a little more pronounced? You know, your leg hasn't finished growing yet, so the kneecap is just a little bump sticking out of it? That's what Bald Bull's head looks like. He's got a grade schooler's kneecap sticking out of his head.

Considering his apparent tendency to smash his head against the ring's corner posts before a match, I hypothesize that his head isn't actually supposed to look like that. Maybe he's been trying to pound it back into shape all this time? 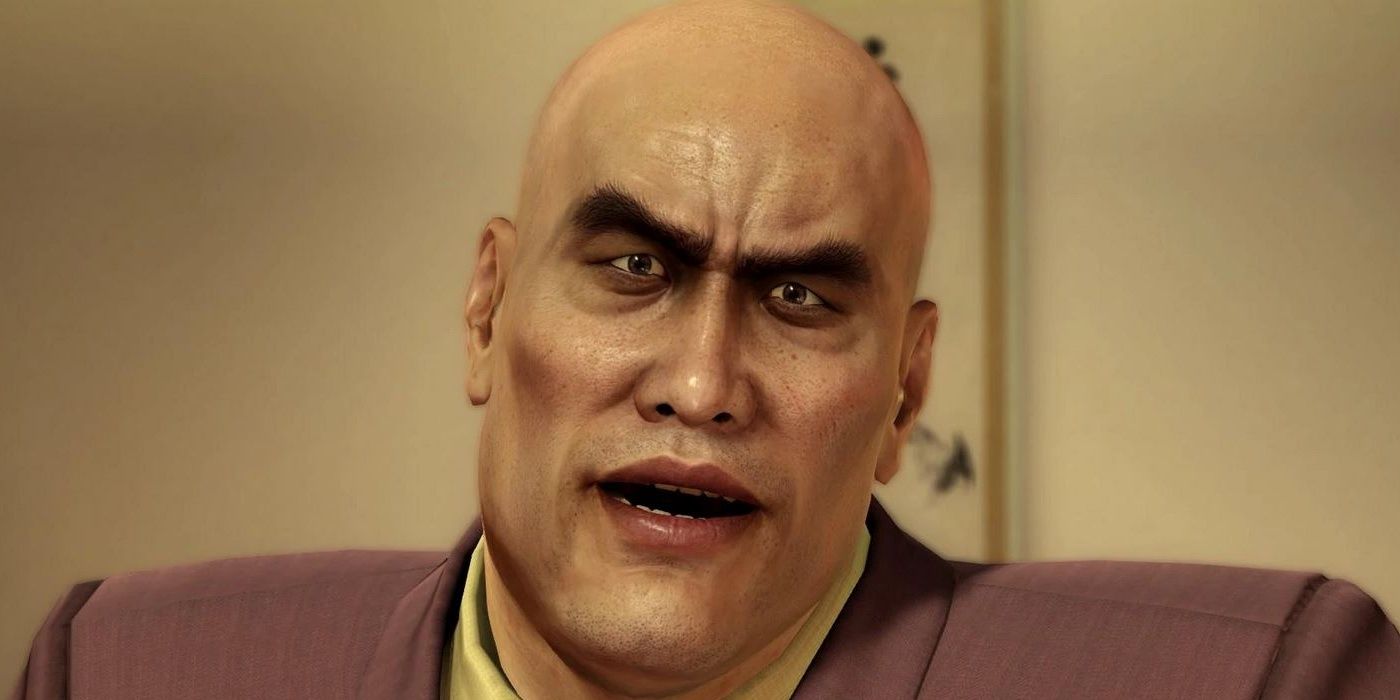 Now there's a face and head that only a mother could love. This one time, I was at a friend's birthday party, and there was a guy doing face painting. I thought it would be funny to ask him to paint an angry face on my knee. It was pretty funny at the time, but looking back on it, all I can see is Shimano's sunken eyes and pronounced brow.

That's some nightmare stuff right there. Could you imagine that guy's face just… manifesting on your knee? No, thank you. 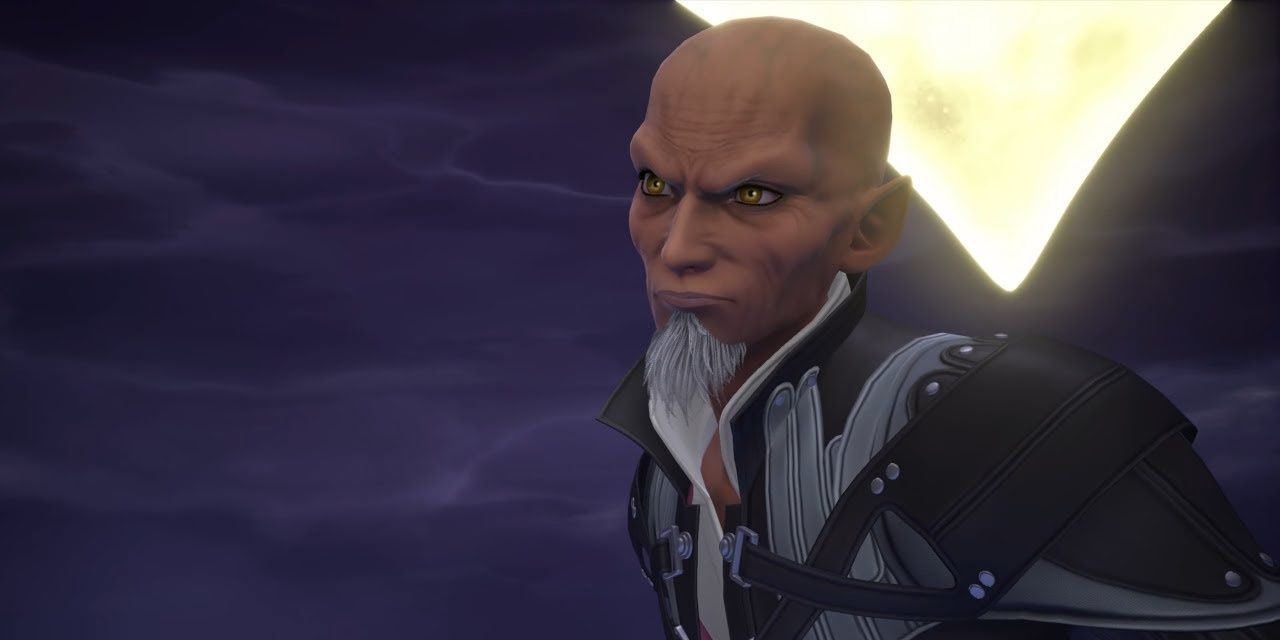 Does anyone else find Xehanort's head really distracting? It's so… veiny. I'd say he needs to get some sun, but he's already naturally tanned, so I guess his head is just like that. It reminds me of an instance when I got a bruise and a sunburn on my knee at the same time.

It was deep red, but also kind of purplish, just like Xehanort's tanned head and purplish head veins. Man, that head is so distracting. How does anyone get anything done when he's in the room? 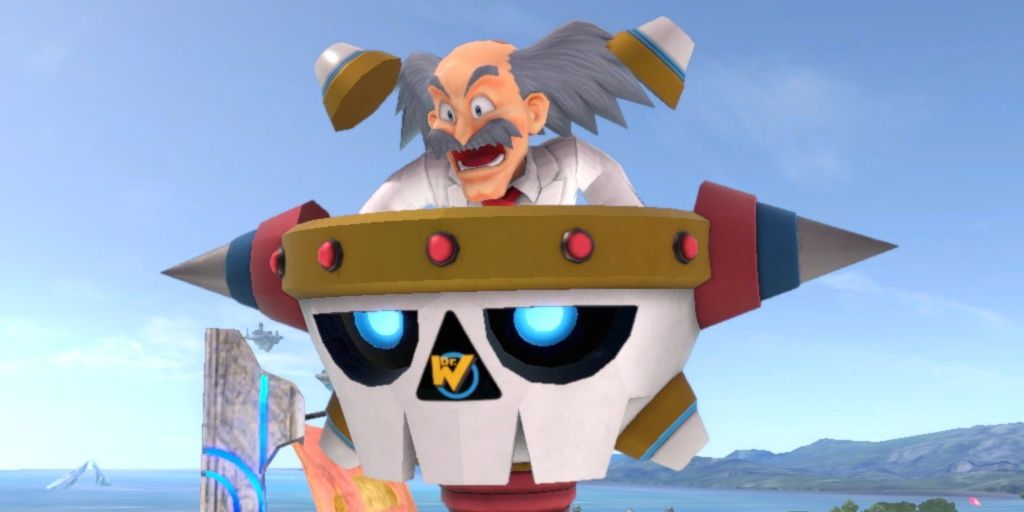 I used to wear a pair of jeans with a big hole over one of the knees. It was the grunge era, you know how it was. But I have to say, every time I see Dr. Wily's particular bald head bookended by his giant hair horns, I'm immediately reminded of how my knees looked in those ripped jeans.

His hair's the same shade of light gray, even! Y'know, Wily really ought to just shave his hair and mustache off. The guy's got a pretty good jawline; he'd look a lot less knee-like without the hair, ironically enough. 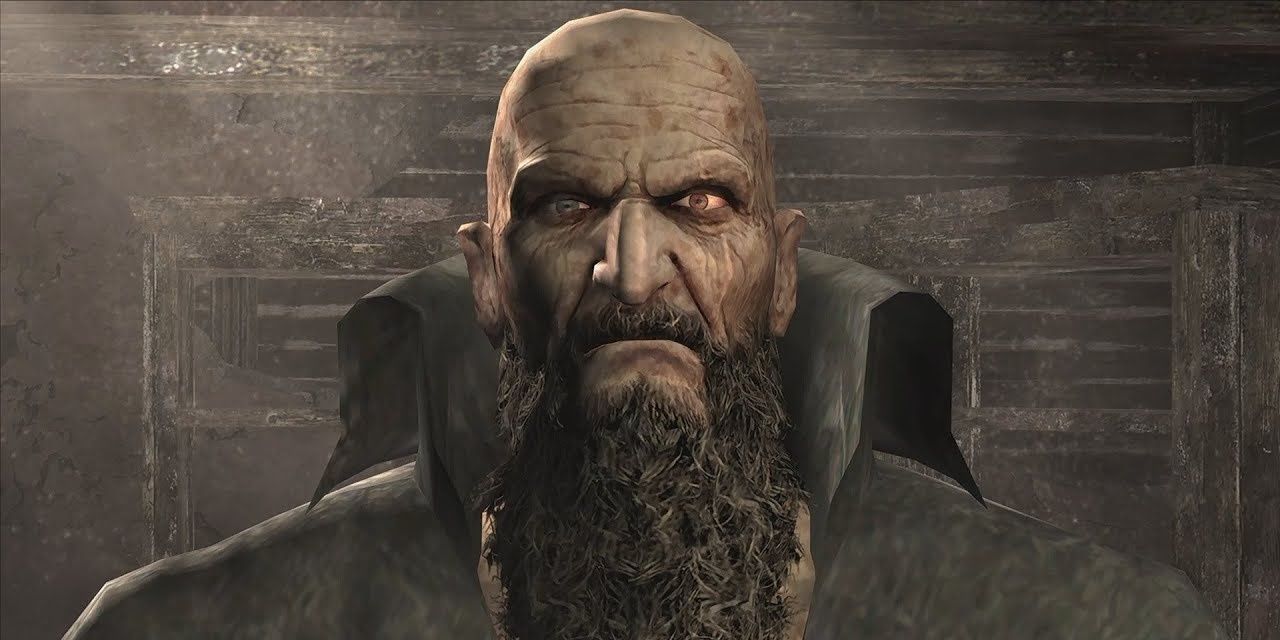 Okay now, if you want to get technical, Mendez doesn't look like my knees. He's too pale and wrinkly. But you know who does have pale, wrinkly knees? My grandpa. One time, when my whole family was at the beach, I got a full view of my grandpa's pasty, wrinkly knees, and boy if they weren't the spitting image of an eight-foot-tall mutant Spaniard.

Obviously, I'm talking about Mendez with his coat on; my grandpa's knees don't have any gross spike claw things. They do have little wiggly hairs, though… 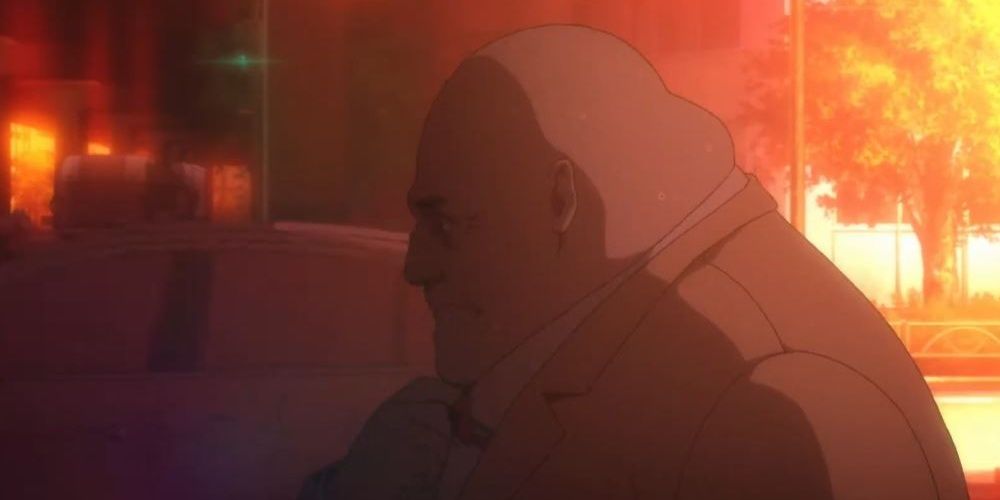 Now here's a guy who was born to look like someone's knees. If there was anyone lower on the totem pole of Masayoshi Shido's conspiracy to take over Japan, I assume they would have a head resembling a foot. But since there isn't, we get mister knee head over here.

One time when I was at summer camp, I got bit like crazy by mosquitoes all over my body, including my legs. The very particular way my knees and thighs swelled up looked just like Kobayakawa. At least my knees were still functional, though, which is more than I could say for this guy. 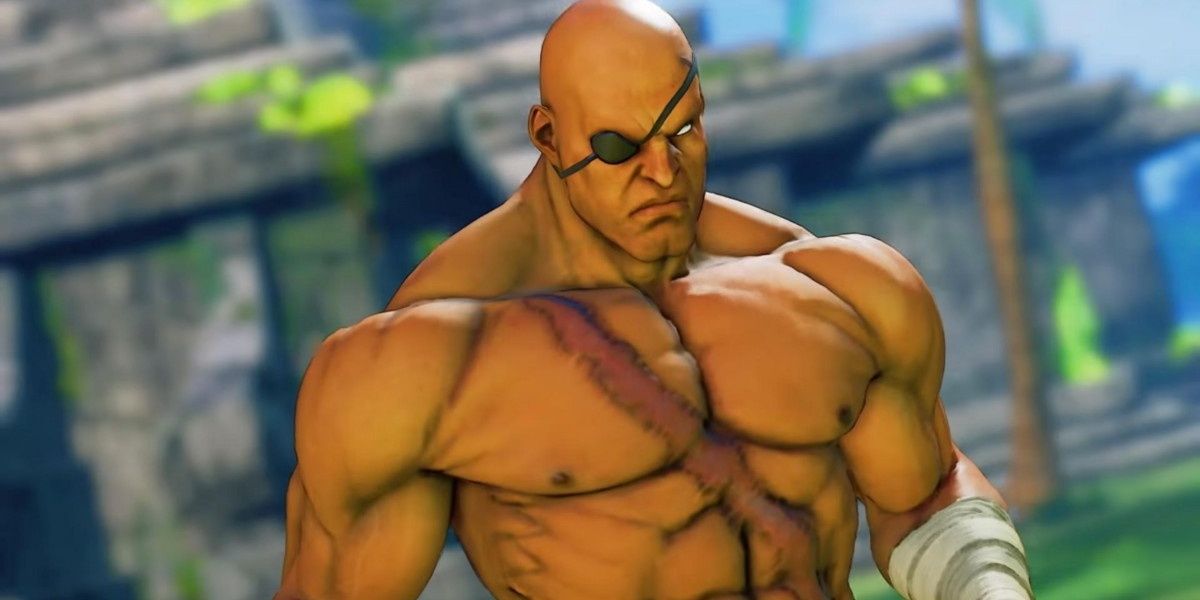 One time, a spider bit my knee while I was outside. It wasn't a dangerous spider, thankfully, but I did have a reaction; the front of my knee turned kind of lumpy and yellowish. And you know who else is lumpy and yellowish? Yep, it's Sagat.

It's kind of a funny coincidence, actually; a lot of Sagat's fighting style revolves around the usage of his knees. Man, I should've tried to pull off a Tiger Knee while my knee was like that, I bet it would've worked. 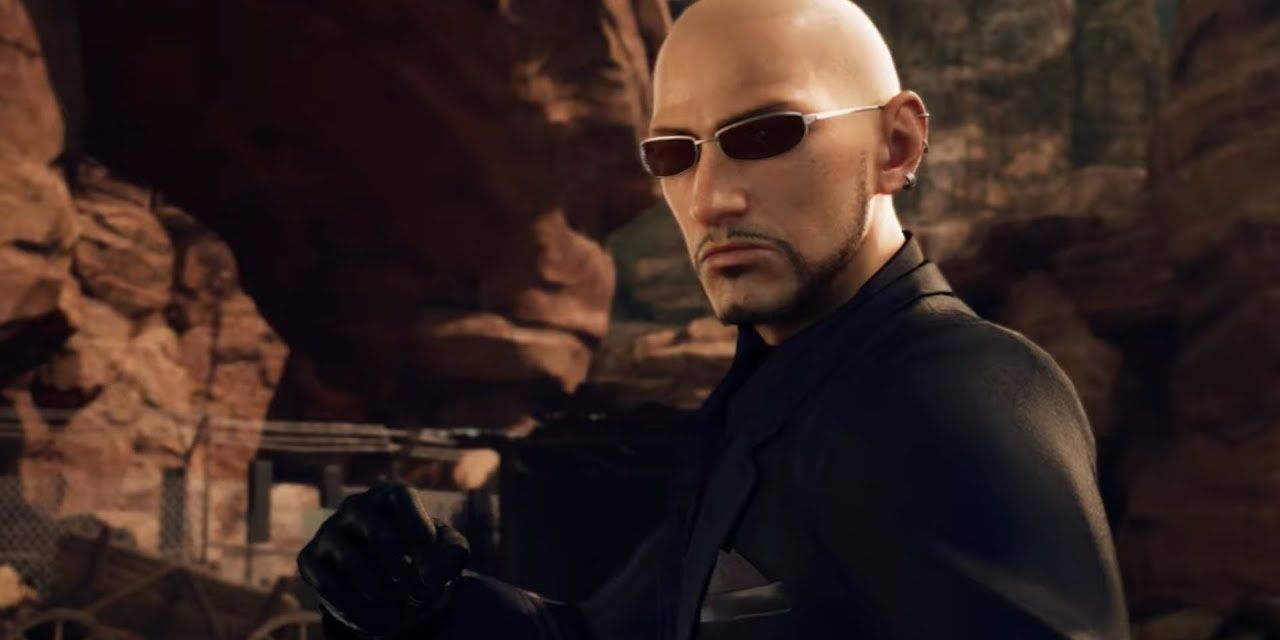 My knees sunburn super easily, so I always make sure to put sunscreen on them first when I go to the pool or beach or whatever. When you put a lot of some kind of cream or lotion on your knee, it tends to hide some little imperfections and make it really smooth, right?

You know who's got a sublimely smooth head? The nicest guy in the Turks (relatively speaking), Rude. I must believe that he polishes his head first thing every morning. When everyone else is combing their hair, that's what he's doing. You can't convince me otherwise. 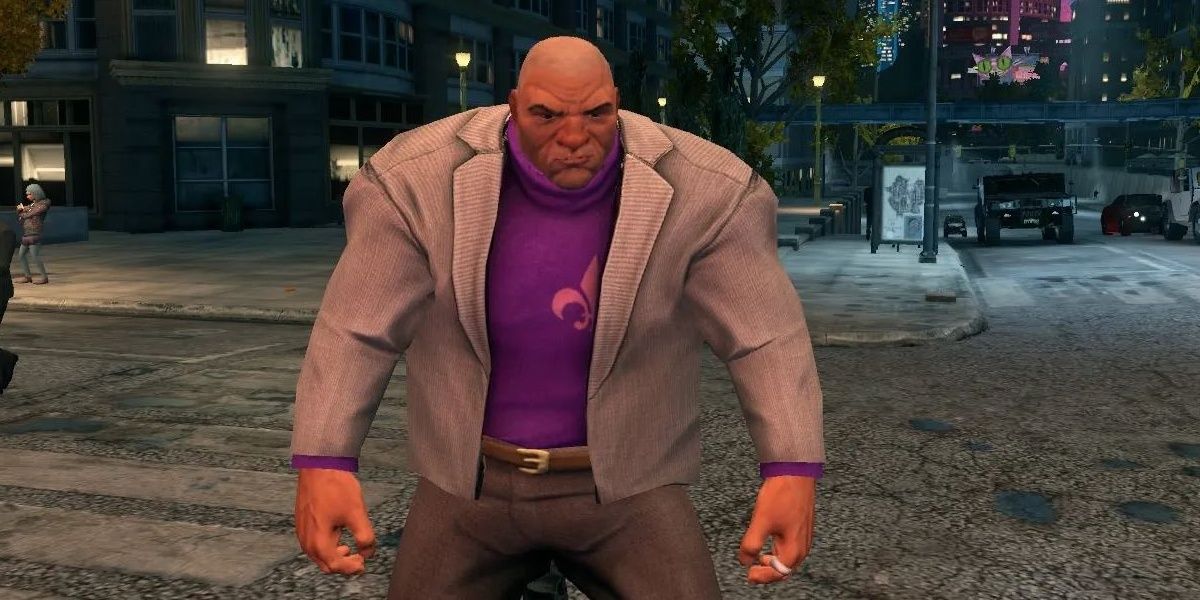 Oleg's head is probably closest to how my knees currently look. Fully formed, mostly round, and a few mysterious scars and splotches acquired from injuries and other assorted nonsense over the years. Honestly, if my knees were gonna look like anyone's head, I could do worse than Oleg.

He's strong, he's intelligent, and he's a generally pleasant person. Shame they killed him off at the start of Saints Row 4, it would've been cool to see him with superpowers. Agents of Mayhem notwithstanding, of course.