Games Workshop, the hobby miniatures game publisher behind the Warhammer and Warhammer 40,000 franchises among others, rolled out a remarkable new line of paints this summer. Called Citadel Color Contrast Paints, they’ve become somewhat controversial among the hardcore miniatures community. I spent an evening experimenting with the products this week and came away impressed. They’ve given me the confidence to paint more miniatures than ever before, including ones that I’d simply been too intimidated to even attempt.

You’re probably asking, “Charlie, what on gods’ green earth could make a paint controversial?” Mostly it’s in how Games Workshop has been marketing the new line. Scott “Miniac” Walter does a great job of breaking things down, but suffice it to say that these paints aren’t for everyone. They’re not even for every miniature.

What they are, though, is extremely easy to use. Contrast paints make painting big batches of miniatures faster than ever before. Most importantly, Contrast paints remove the hassle from painting flesh, which can be a nightmare for novice painters. They’re not the right solution for everyone, for every game setting, or even for every miniature. But, used correctly, they’re a tremendous addition to the toolbox.

To understand what makes Contrast paints different, you’ve got to understand a little bit about the modern techniques used to paint hobby miniatures. The process begins with putting primer on a plastic or resin miniature in order to give it enough texture to accept acrylic paints. After that, a thin basecoat of paint is applied in the appropriate colors. Then detail is built up in layers using various techniques.

One common technique for adding that detail is called edge highlighting, which requires precision and skill to paint tiny lines all around a miniature to draw attention to specific parts of the model. Another common technique is called drybrushing, which uses a brush with very little paint on it to apply light colors to raised edges all over a model. Washes — very, very thin paints that pool in corners and recesses — are also commonly used to add texture and depth.

All three of these techniques — edge highlighting, drybrushing, and washing — can be used in conjunction to create stunning pieces. Most hobbyists will only use one or two to quickly get their models “table ready,” while other painters will use all three in addition to more advanced techniques like glazing and wet blending.

What makes the Contrast line of paints different is the consistency of the paint itself. It’s very, very thin and tends to want to pool in recesses like a wash. But it’s much more substantial than a wash, and can be applied in thin layers to boost the vibrancy of a given color. It’s also extremely opaque, such that darker colors can be applied over lighter colors to achieve different effects.

Working with the paint on my models, I was surprised how easy it was to “stay within the lines” so to speak. Due to the density of regular acrylic paint, it’s easy to accidentally push it past the natural ridges on a model into areas where you don’t want it to go. That makes time consuming touch-ups a necessity. Contrast paints just sort of flow around the area where they’re applied, stopping when they meet resistance. So I was able to confidently splash a fair bit of paint onto my models with a heavily-loaded brush, and then go back and smear it around the area that I wanted to paint. If I found that I had too much, all I had to do was dry my brush and use it like a sponge to wick the extra paint away.

When models dried, the result was a very even look, with lots of contrast around the textured elements and details. 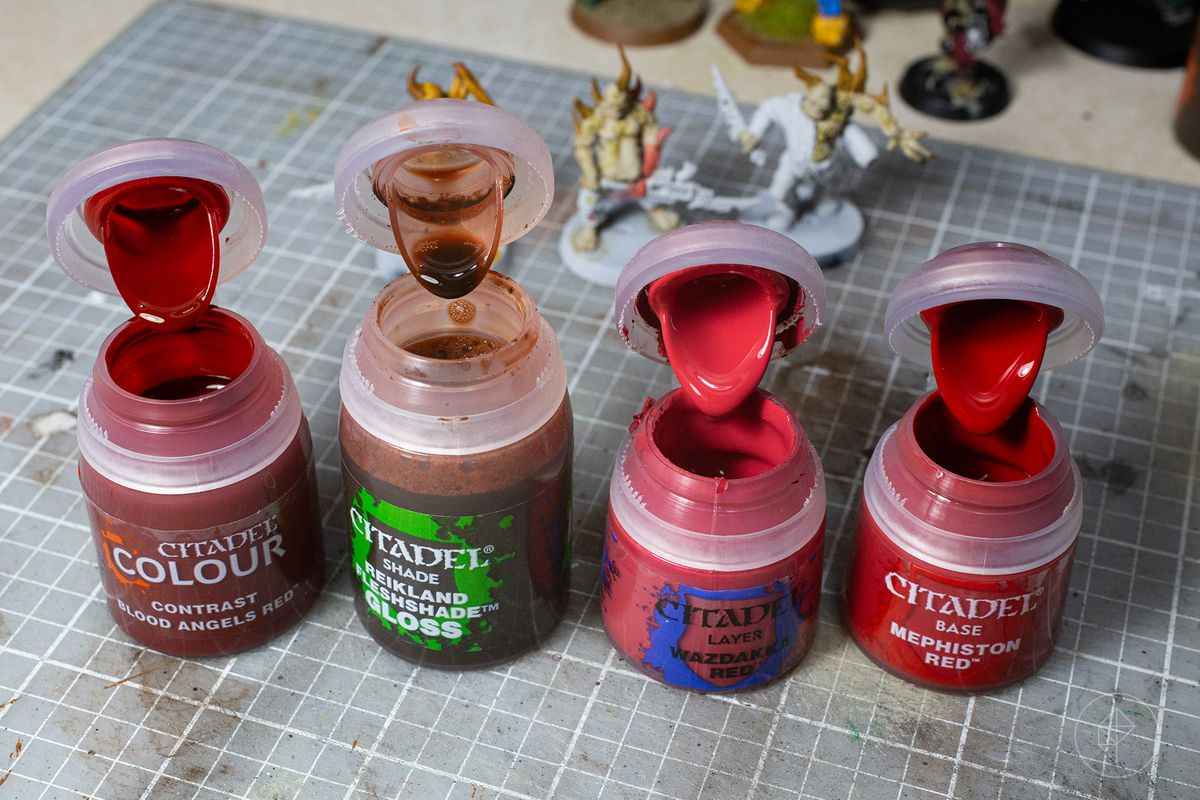 Essentially, using a Contrast paint is like working with a traditional acrylic paint and a wash at the same time. They made the work of painting faster and easier for me.

There are big drawbacks, however. The consistency of the paints makes freehand work — adding textures, patterns, or writing to a model where none exists on the sculpt itself — very difficult. The tone of the paints also tends more toward the pastel. Hard surfaces, like armor and weapons, tend to look soft and dreamy rather than sharp and crisp. But for flesh — including faces on Space Marines, the bodies of Orks and other monsters, and zombies of all types — I’m not sure there’s a better option available.

How I got into tabletop wargaming and how you can, too

The bottom line is that Contrast paints will allow me to paint more miniatures faster than ever before. In fact, they’re likely to allow me to paint miniatures that I otherwise would never have attempted to paint in the first place. The Poxwalkers in the image above are from the Warhammer 40,000: Know No Fear boxed set. Because of the labor-intensive process required to color, highlight, and wash them they’ve sat on a shelf in my hobby room for more than two years. Now, after one evening messing around, I’m well on my way to having all eight of them done.

Contrast paints have also had the effect of freeing me from the paint-by-numbers ethos that pervades much of the hobby. Because they’re so easy to work with, I’m less concerned about spending a lot of time planning in order to paint a model the “correct” way. Instead, I’m more interested in playing around and getting a look that feels right for me. I might even go back and use other techniques like edge highlighting to add additional detail later on. Either way, I’ll have a lot more excellent-looking, table-ready miniatures than I otherwise would have had before I started using Contrast paints. The results are so good that I’m even considering painting up Polygon’s set of Kingdom Death: Monster, which I previously wouldn’t have touched in a million years.

For novice painters, kids just getting into the hobby, or those of us who want to bang out an occasional set or dress up a favorite board game, there’s no better solution that I’ve found.