In the third chapter of Mizuki’s route in AI: The Somnium Files – Nirvana Initiative, you’ll need to enter the mind of the Masked Woman, the mysterious figure who has been frequently appearing in the story up until this point. Inside their somnium, you’ll learn more about the nature of the Horadori Institute’s human experiments and the origins of this strange character.

As with other somniums in the game, you’ll need to solve some puzzles to unlock five mental locks and clear the somnium. In this particular instance you’ll have a combination of both simple quick time events and logic puzzles to tackle, and it also branches into two paths which split the story into different routes. 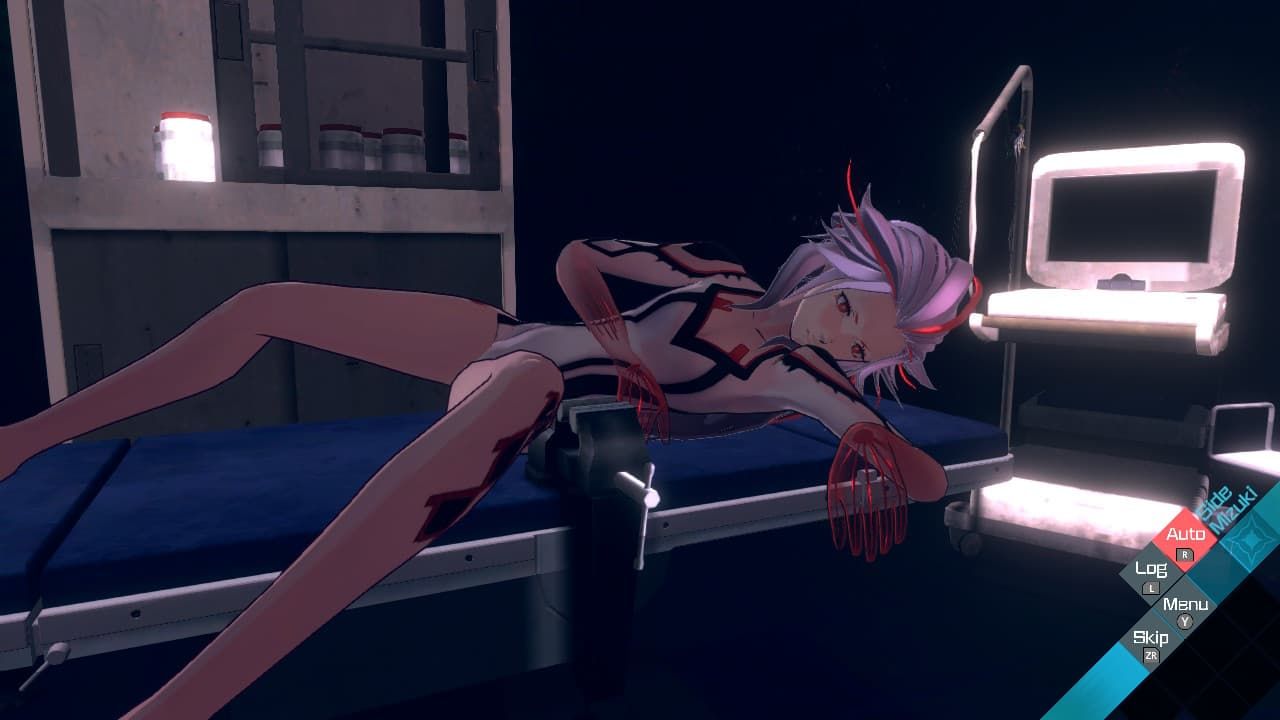 As the somnium begins, you won’t be treated to a dance from Aiba like usual, as she’s restrained. Shortly after this, you’ll need to rapidly tap a button to break free from your restraints as Aiba. This is the first task of the somnium, and immediately unlocks the first mental lock. Easy! 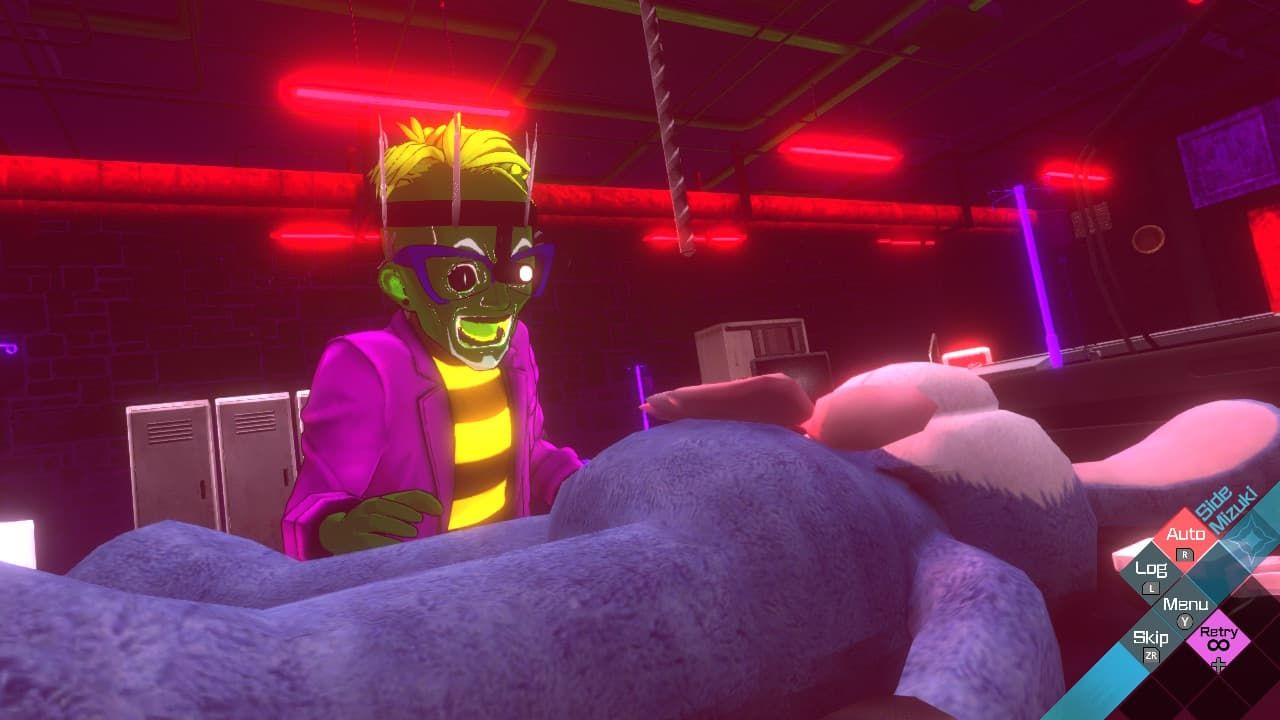 After properly entering the somnium, Aiba will speculate that we’re playing the role of the Masked Woman in this somnium. For this reason, we’re being hunted by Chikara. Just before he arrives for the first time, you’ll be given a ten second countdown to hide.

There are a few possible options, but one particularly effective choice is the option to hide under the white desk. Chikara won’t find you, but they will start to fill the room with nerve gas on their way out. You’ll now need to find a way to get the nerve gas out of the room! 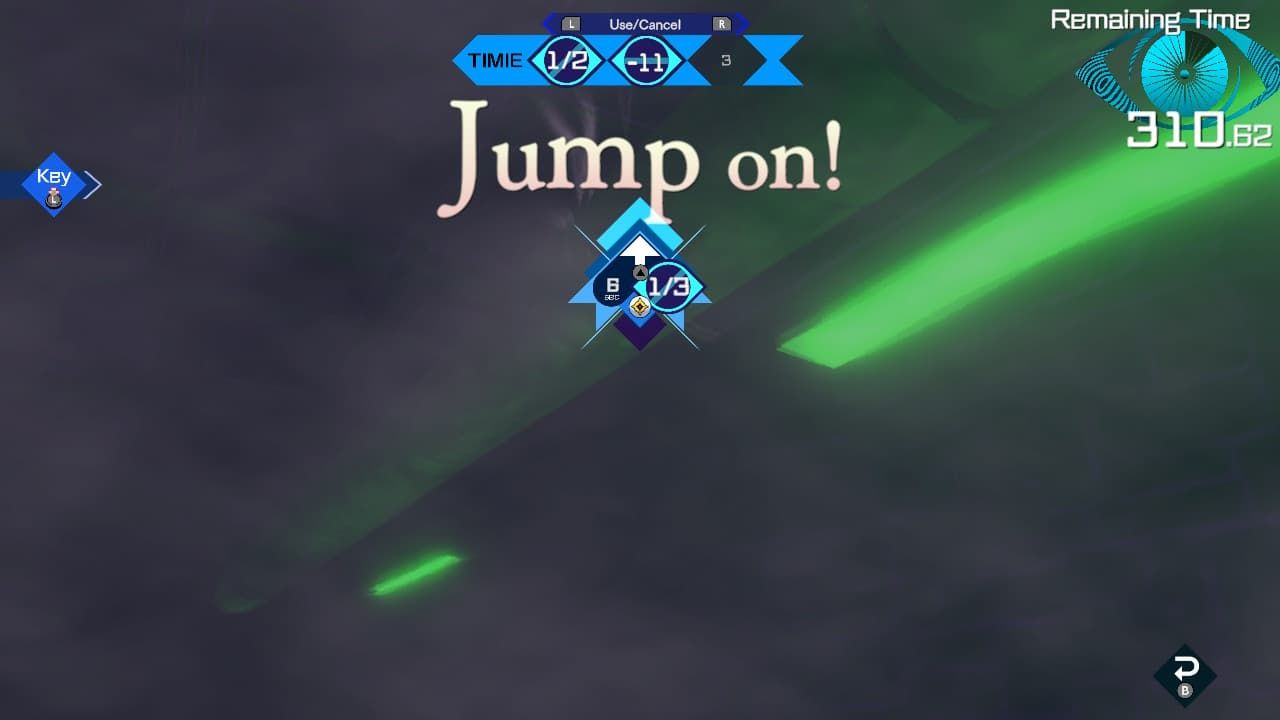 You’ll see a number of possible solutions in the room, but turning off the respirator or opening the vent won’t work. You’ll need to look at the green pipe near the ceiling of the room, then choose the option to jump on. This will allow you to open up the pipe and extract the gas from the room, as it’s an exhaust pipe.

This will unlock the second mental lock of the somnium, which brings us close to the potential branch. 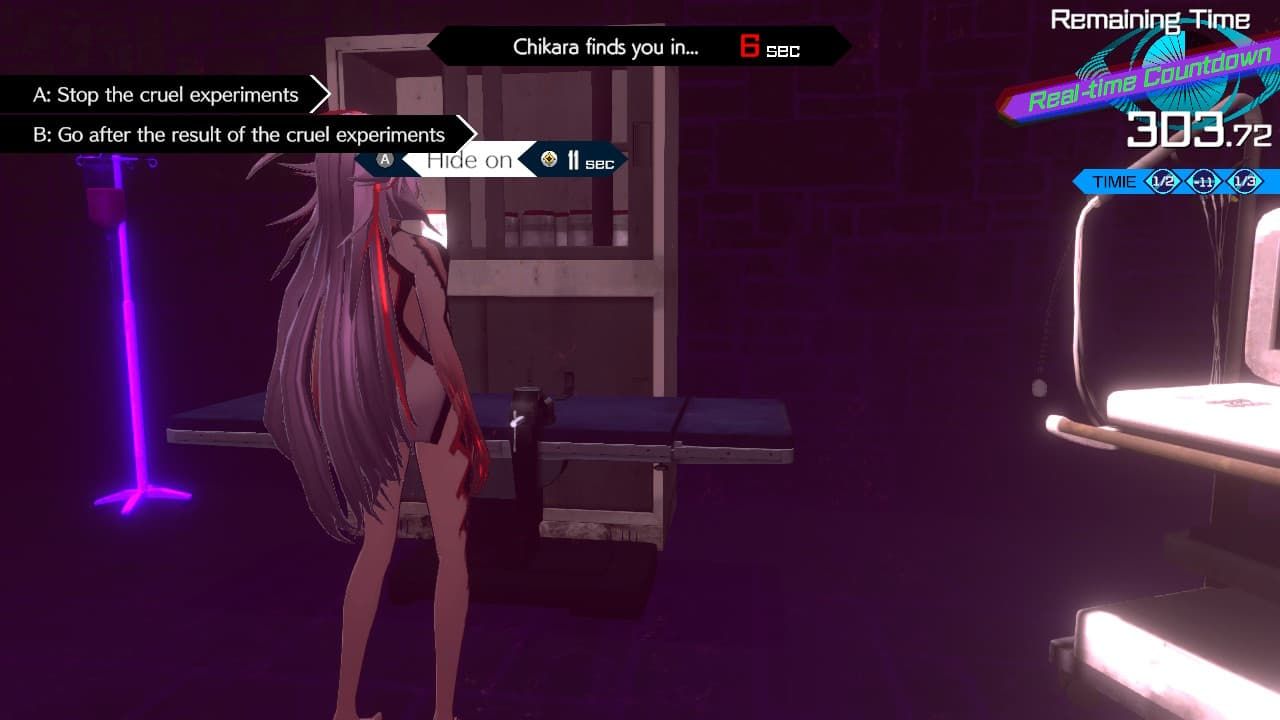 There are now two options for your objective. The choice you make later during this section will determine how the story branches, however, you might not have enough information on how to make one of these choices, and you can always return to this somnium later to experience the other branch – in fact, you’ll need to do this in order to reach the overall ending.

To begin with, however, you’ll first need to hide from Chikara once more. This time, he’s going to bring a flashlight, so he’ll have a lot more visibility. This means you’ll need to find a really good hiding space in just a few seconds.

The hiding spot you need to choose is the option to ‘hide on’ a cabinet next to the blue torture bed you woke up on at the start of the somnium. This will allow Aiba to climb on top of the cabinet and reach the pipes above, meaning they won’t be spotted.

After this, you’ll need to intervene to stop Chikara torturing a stuffed animal. In a brief segment, you’ll need to do occasional button-mashing quick time events to prevent Chikara spotting you.

Unlike other somniums, this section will make the time count down even when you’re not moving, so be sure to not waste any time. Stay out of Chikara’s general perimeter to avoid needless quick time events. 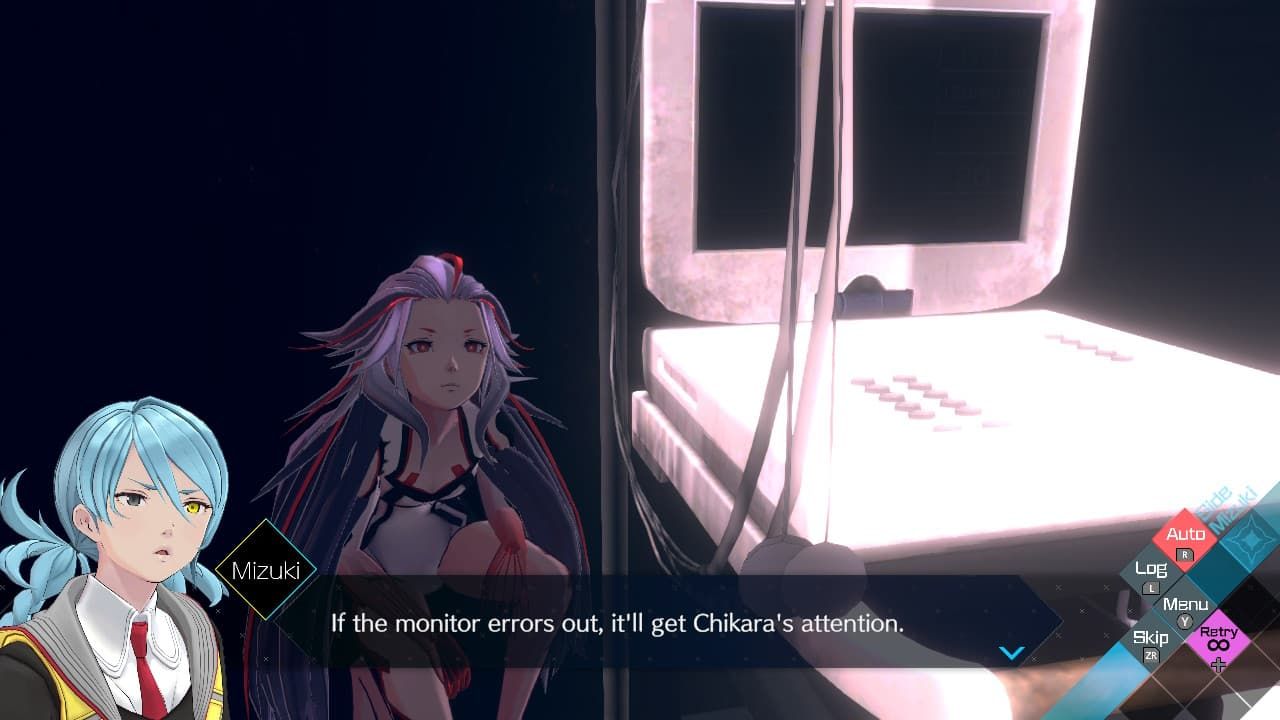 However, to deactivate the electricity, you’ll need to go to the PC behind them and choose the option to rewrite the program in order to get the torture to stop. 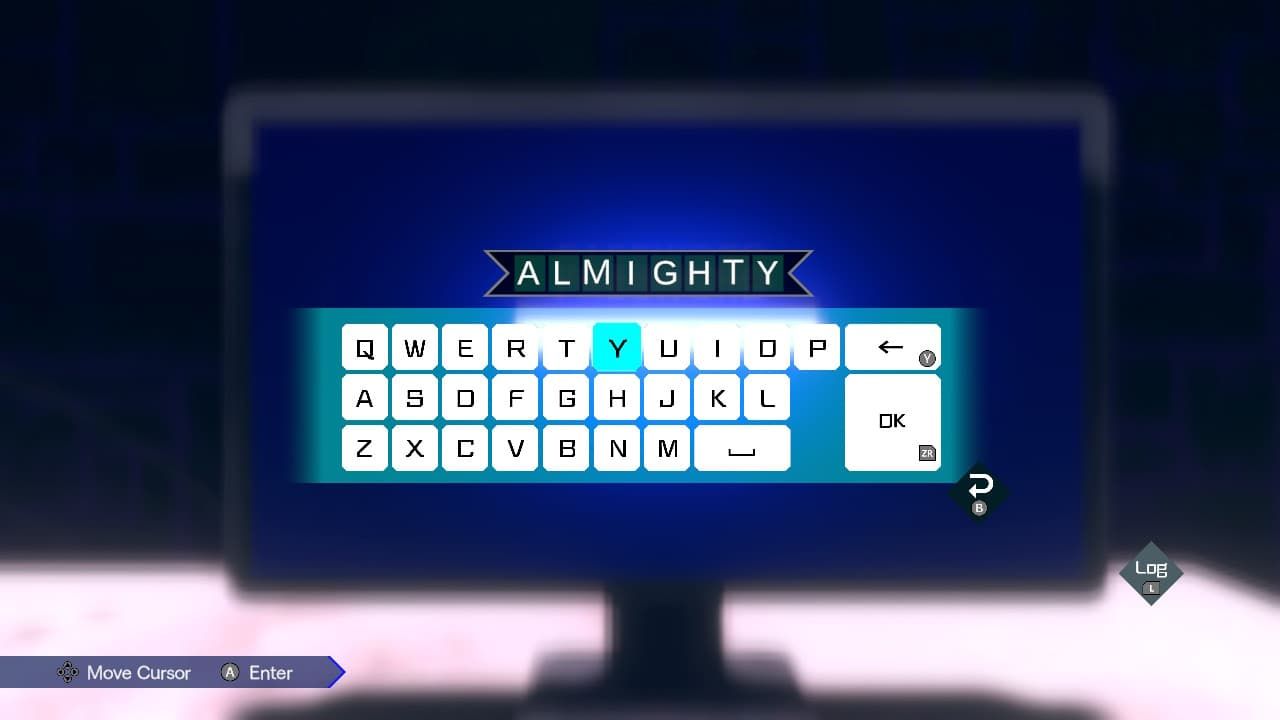 After this, you’ll have to think fast in order to branch the somnium. If you already know what eight letter word Chikara said to his son, you can enter ALMIGHTY at this password screen to get path B (Result Of The Experiment).

If you don’t know, however, which is more likely, you cannot enter anything at all to get path A (Halt The Experiments). 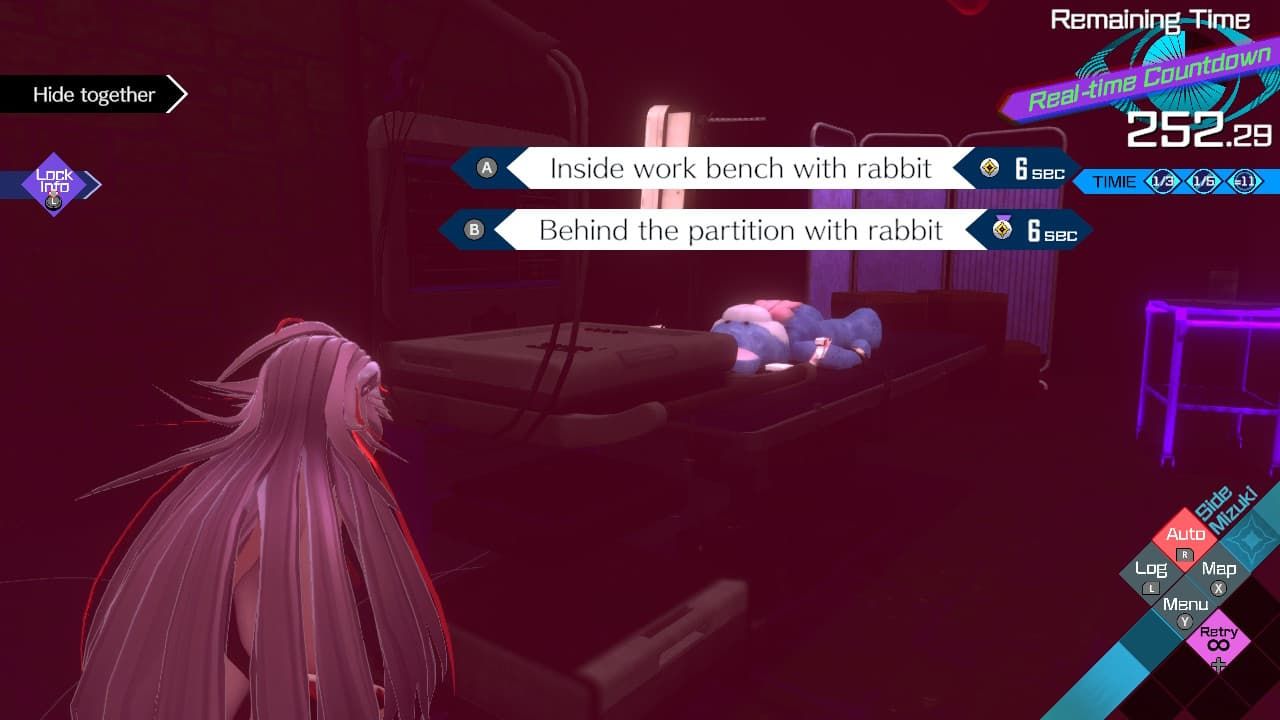 If you chose to Halt The Experiments by not entering anything into the password screen, you’ll need to hide from Chikara again soon after. Walk slowly around to the rabbit and choose the option to hide with the rabbit inside the workbench. This will prevent Chikara from finding you initially, and unlock the fourth mental lock.

Result of The Experiment Path 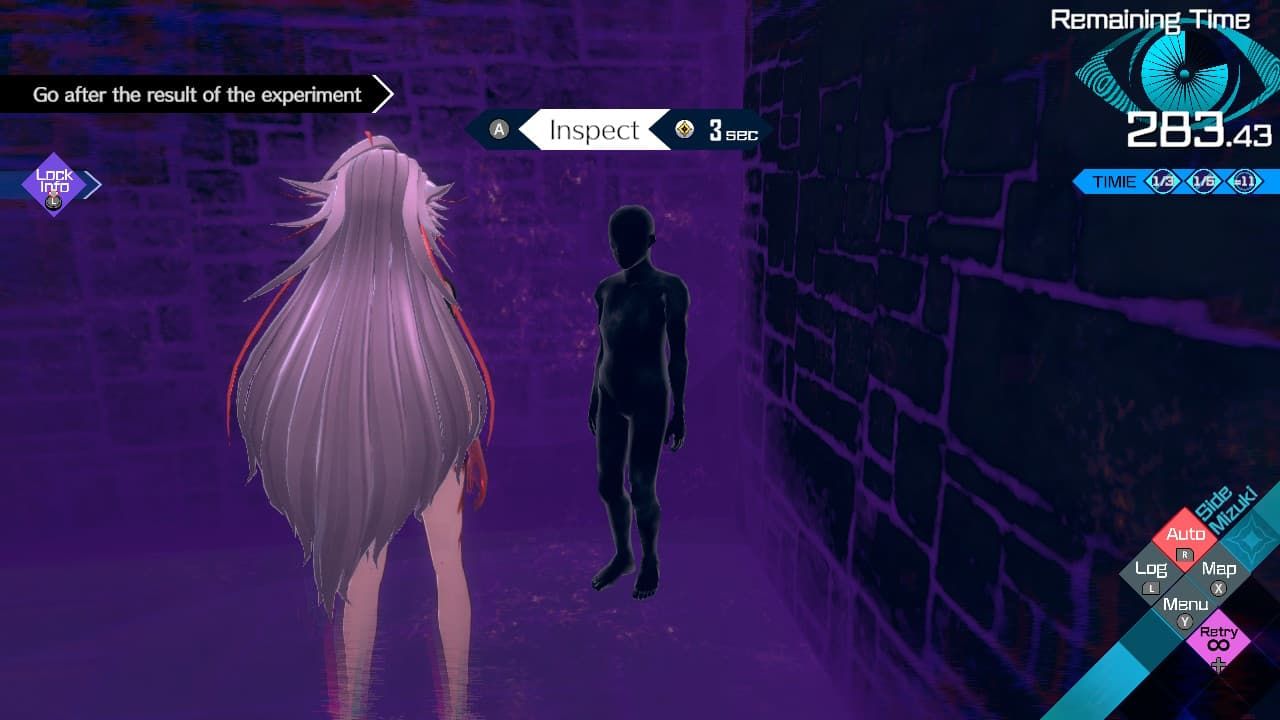 After entering the password into the computer, your environment will suddenly change. A group of people will now appear in the room, and you’ll need to interact with some of them to ‘go after the result of the experiment’. Interact with each of the shadowy figures one by one, and eventually, another will appear in the corner of the room that you can interact with. Talking to this character in the corner will unlock the fourth mental lock. 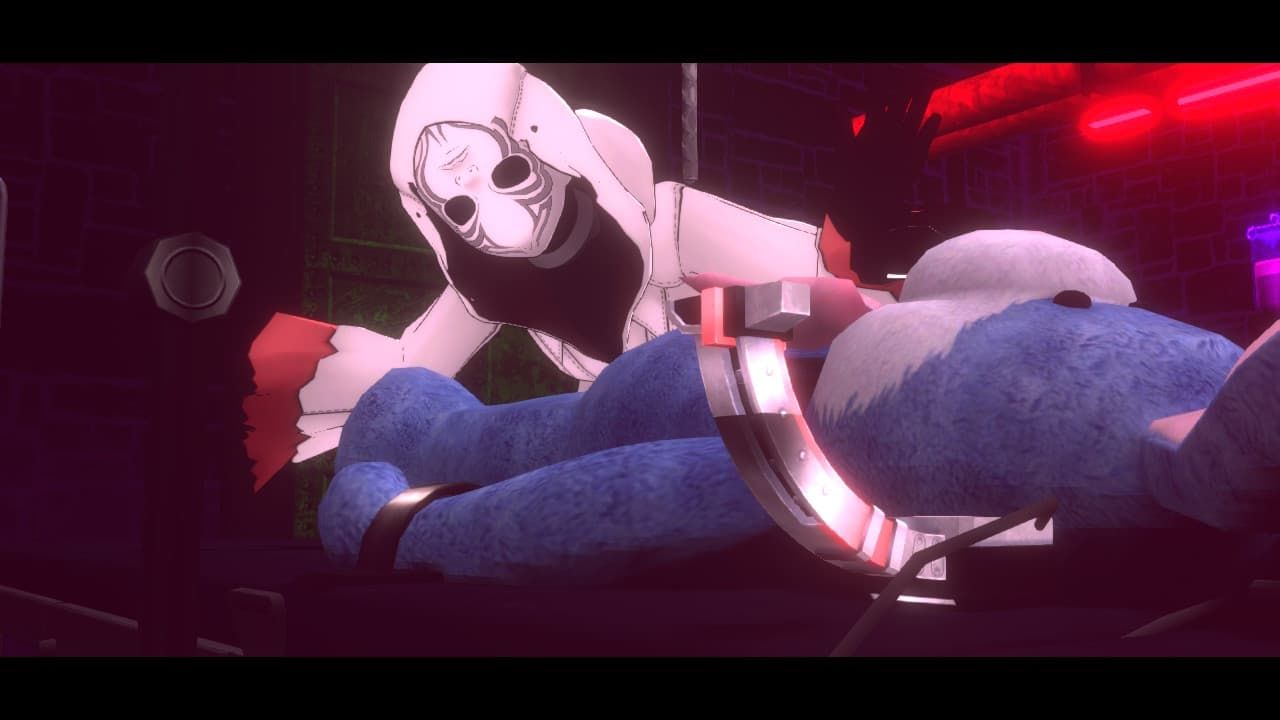 Unfortunately your hiding will be cut short, and the bunny will be snatched away by Chikara at the last minute. In order to unlock the final mental lock of the somnium, you’ll need to make a series of quick decisions to protect the rabbit.

Result Of The Experiment Path 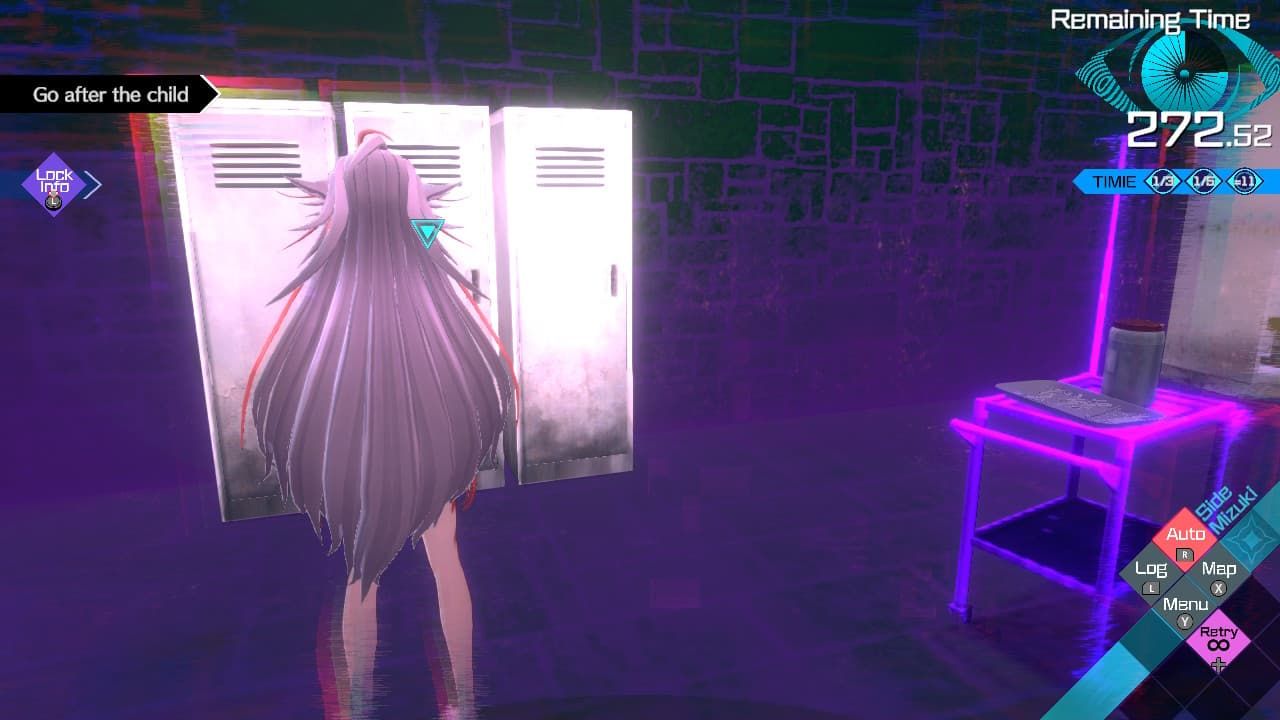 Proceed towards the green door. Once you do, you’ll be directed to the book in the corner of the room. Interact with it and you’ll learn more details about Chikara’s experiments. Pursue the shadowy figure into the locker to read one more book. The shocking result of Chikara’s experiment will be revealed, unlocking the final mental lock of the somnium.