The Semiconductor Industry Association, the chip industry lobbying group, gave her the award in an online ceremony today. Normally, the event takes place in San Jose, California, and has about 1,000 attendees.

Su’s award represents the first time the award has gone to a woman since it was started in 1991.

“It’s an incredible privilege to be part of this industry,” said Su. “I actually fell in love with semiconductors in my first year at MIT. My first job was doing grunt work in a semiconductor lab. If you look at this year, what is resoundingly clear is that technology is becoming even more important.”

The SIA presents the Noyce Award annually in recognition of a leader who has made outstanding contributions to the semiconductor industry in technology or public policy. In her acceptance talk, Su emphasized that exposure to STEM (science, technology, engineering, and math) is so important to young people. For women and minorities, she said there are incredible opportunities and you can see the fruits of your work in their impact on society.

“Our job is to provide those opportunities,” she said. “I’ve been very fortunate to have good mentors.”

Su has served as president and CEO of AMD since October 2014 and also serves on the AMD board of directors. During her tenure, AMD has seen a historic resurgence, which started with the launch of its Zen architecture in 2017. That architecture turned out to be very competitive versus the processors of market leader Intel, and it helped AMD gain market share. 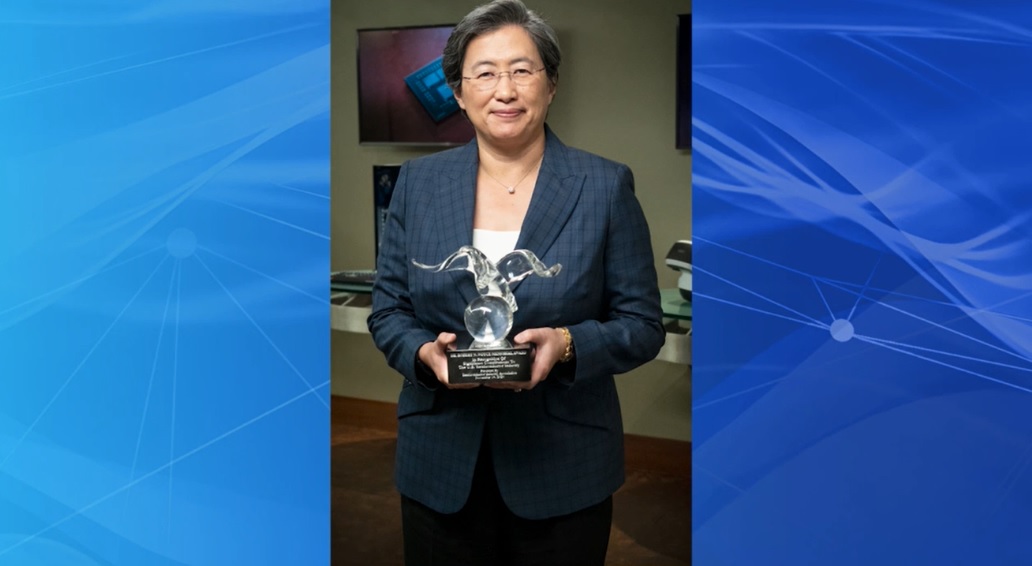 Above: Lisa Su of AMD gets the Noyce Award.

Zen 2 launched last year and it helped AMD sustain its market share gains. In the x86 market, AMD’s share has reached 22%, according to market researcher Mercury Research. That is the highest level since 2007. AMD has also seen a resurgence in its graphics chip business, which competes with Nvidia.

When she joined AMD, it wasn’t a winner.

In her latest transformational move, Su recently announced that AMD will buy programmable chip maker Xilinx for $35 billion. With that deal, AMD will once again go head to head with Intel, which bought Xilinix’s rival Altera.

Prior to becoming CEO, Su was chief operating officer responsible for all aspects of product strategy and execution. Before joining AMD in 2012, Su served in a variety of high-level roles at several semiconductor companies, including Freescale Semiconductor, IBM, and Texas Instruments.

Five years out of grad school, Su became the assistant to then-IBM CEO Lou Gerstner. Her job was to teach him about technology.

“It was a phenomenal experience. He showed me how important it is to connect the dots,” Su said. “As cool as technology is, what is the larger purpose. At the end of the day, it’s important to make something that matters.”

John Kelly, a former IBM executive and chip leader who spent four decades at the company, gave the award to Su. 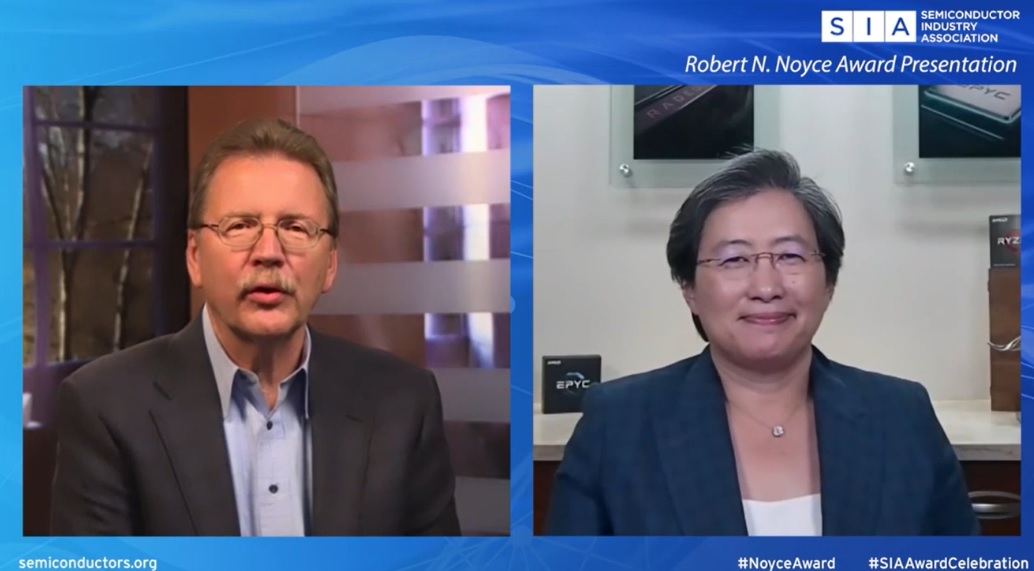 Su has bachelor’s, master’s, and doctorate degrees in electrical engineering from the Massachusetts Institute of Technology (MIT). She has published more than 40 technical articles and was named a Fellow of the Institute of Electronics and Electrical Engineers in 2009. She helped play a critical role in replacing aluminum interconnects within chips with copper, resulting in chips that were 20% faster and consumed less power, said Kelly.

“Lisa became instrumental in the creation and success in IBM’s major alliance with Sony and with Samsung,” Kelly said.

There’s a certain irony in an AMD leader getting the Noyce award, which is named in honor of semiconductor industry pioneer Robert N. Noyce, cofounder of Fairchild Semiconductor and Intel.

In June, after the unrest related to George Floyd’s death this summer, Su said the events were “extraordinarily disturbing” and that the racial divide and social inequity in the U.S. have to be addressed.