As Dusk Falls felt like it came out of nowhere in the Xbox Bethesda Showcase earlier this month, and it didn’t leave the most positive of impressions. Many were quick to poke fun at its painterly aesthetic that favoured frame-like movement instead of traditional character models, while others felt like it was directly riffing on modern classics like Breaking Bad or Fargo without any of the writing prowess to make it worthy of such inspiration.

Having played the opening two chapters, I feel there’s some hidden potential to this narrative adventure, even though it relies much too heavily on dialogue wrought with exposition and lead characters who just aren’t that interesting. The story follows two families on completely different paths in life, until one fateful day brings them together under circumstances of violence, betrayal, and misunderstanding that will change their destinies forever. Set across the sandy state of Arizona, this is a game that wants you to see it as grounded and serious, never once taking its foot off the pedal in favour of levity.

The Walkers are moving across the country with their young daughter, dealing with a struggling marriage and the idea of starting a new life amidst unfamiliar surroundings that will make or break them. The Holts are a trio of siblings trying to pay off their father’s mysterious debt, even if it means breaking into the local sheriff’s house and stealing thousands from his safe. We see them cross paths for the first time in a traffic collision, with the Holts forcing the Walkers to abandon their busted car and walk to a nearby motel in search of help.

It’s a dusty, country bumpkin establishment with seemingly no guests, miles away from the nearest town or any form of civilization. We take control of Vince, the man of the family who must deal with both the return of his estranged father – who seems like a real dick – and his wife having to awkwardly navigate all the changes going on in their life right now. I played him as a submissive little bitch, wanting to nip any potential confrontation in the bud to avoid anyone either kicking up a fuss or getting hurt when shit hits the fan. He seemed like a nice man with worthwhile principles, and not the type to pick up a gun and shoot teenagers who happened to find themselves in a bad situation. This didn’t exactly work out in my favour…

Speaking of, the Holt family’s plan to rob the sheriff blind and make off without being noticed doesn’t work. The entire county is after them, so the trio bust into the motel and start taking hostages at gunpoint. But before everything goes south I take control of Jay, the youngest sibling who has clearly been roped into these shenanigans against his will. His brothers are toxic idiots, eager to stir up trouble and trash up the house instead of finding what they came for and leaving. I find the safe, but not before stumbling upon the sheriff’s disabled wife in her bedroom. Unable to speak, there was no way for us to notice her until opening her bedroom door and staring them down. I stop her from calling to help, letting her know what we’re here for and that nobody has to get hurt. She helps us, telling me the location of the safe and seeming almost dismissive of her corrupt husband. Good on her, so off I went. 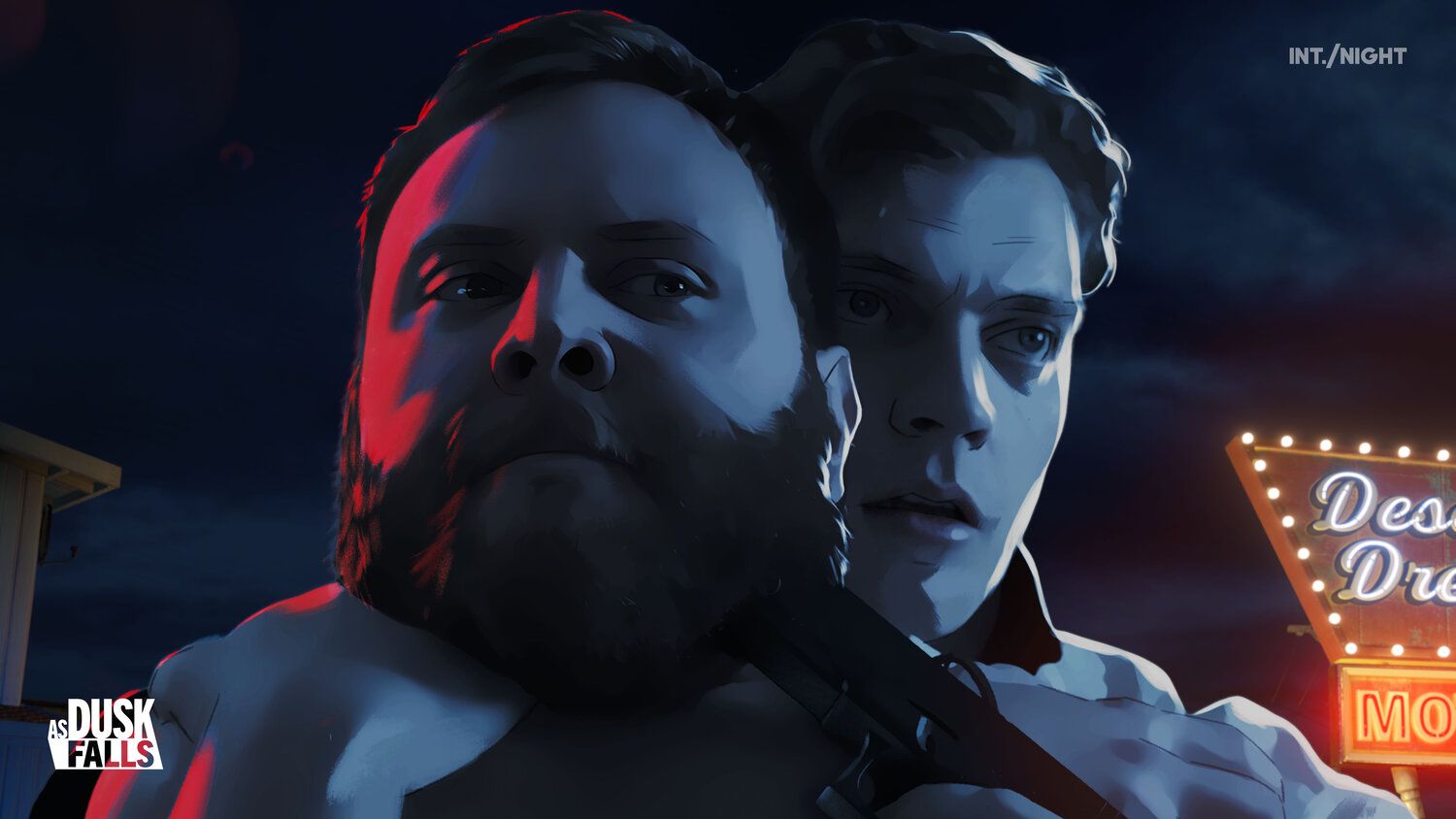 If you thought Life is Strange or Detroit: Become Human were light on traditional gameplay, As Dusk Falls takes it one step further. You don’t move your character around, steering things only through dialogue options and quick time events to avoid being spotted or react to potential obstacles. There are occasional moments where environments must be examined, but instead of granting us direct control the character moves to a specific spot and stares blankly at his surroundings, allowing us to move the cursor around and select objects of interest. It doesn’t feel great to play, largely because the cursor works like a mouse instead of flicking through options like every other game in this genre, so even simple tasks like engaging in conversations can feel awkwardly stilted, going against the unfolding drama’s pace.

When combined with a visual aesthetic that wants to come across as poignantly artistic similar to Richard Linklater’s A Scanner Darkly, you have a game that doesn’t particularly feel or look that good. It’s something new, and certainly ambitious, but its graphical approach often results in accidental moments of hilarity or facial expressions that turn instances of drama into comedy as the cast does their very best to give convincing performances. They’re too good for the material, which so often falls into clumsy exposition and unrealistic responses to conflict that had me questioning if I’d done the right thing at all. Like all games of this type there are big decisions that will see the narrative splinter off in different directions, but there’s only so many divergent paths to take. 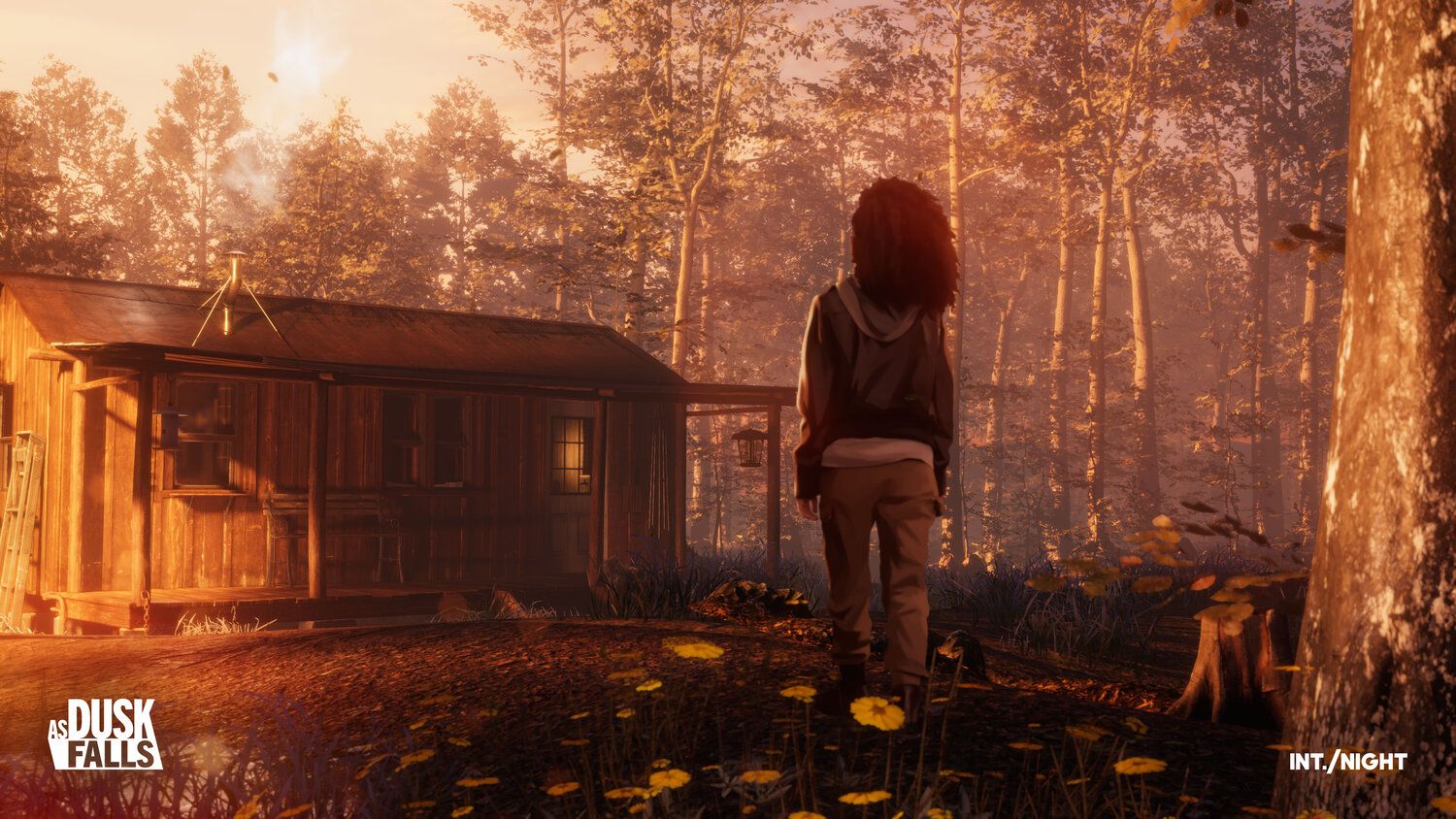 The first two chapters are only a small slice of this adventure, and there’s a twist to the premise that could see things become far more interesting. As Dusk Falls will follow these two families over a period of three decades, meaning we will see people grow older, learn life lessons, and perhaps even perish in the face of adversity. The thing is – I need to care enough about the foundations to follow it through, and right now I’m not so sure if I do.