Assassin’s Creed Valhalla: All Of The Animals Who Can Join You On Your Adventures (And How To Get Them)

Assassin’s Creed Valhalla thought of it all as it has Vikings, raiding, and most importantly, it has animal companions. Who wouldn’t want to run around as an incredible Viking with a few animals by their side? These animals will take your in-game experience to the next level simply with their presence.

There are seven animals and they are easier to obtain than you may think. It can take some time to acquire them all, but it is well worth it for the endless amount of adorable faces to offset Eivor’s brute personality! 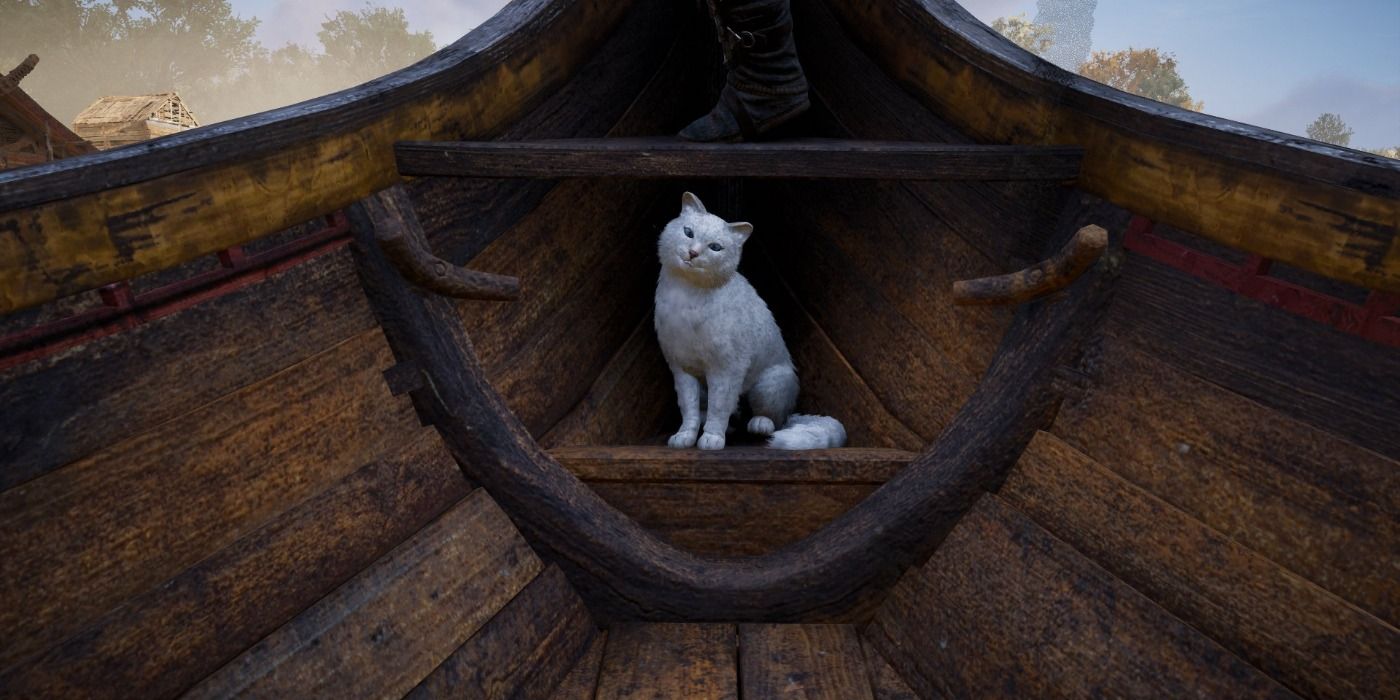 If you wanted a furry addition to your longboat then you should seek out the Viking Raider Cat. It will sit at the end of your longboat, tucked into the corner and out of the crew’s way. Sometimes it will sit and other times you will find it balled up and fast asleep. 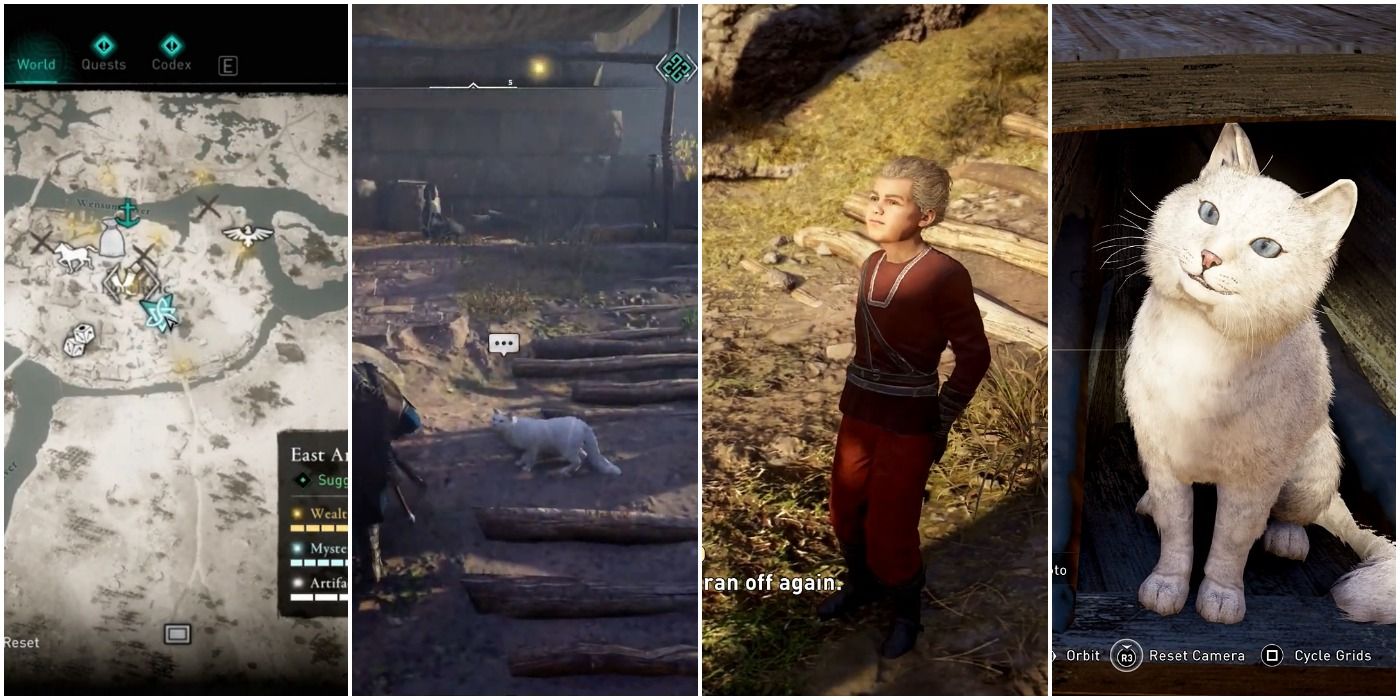 You will need to head to Northwic in East Anglia and start a quest called Freya’s Friend. There are two ways to start and complete this quest, but both yield the same results.

The first way is to find the cat, speak to it, and then follow it until it stops. The second method is to talk to the boy who will tell you about the cat, then you need to follow him to the cat’s location.

Once the cat is finally found then speak to the boy again and the cat will be automatically added to your longship for you to enjoy for the duration of your game. 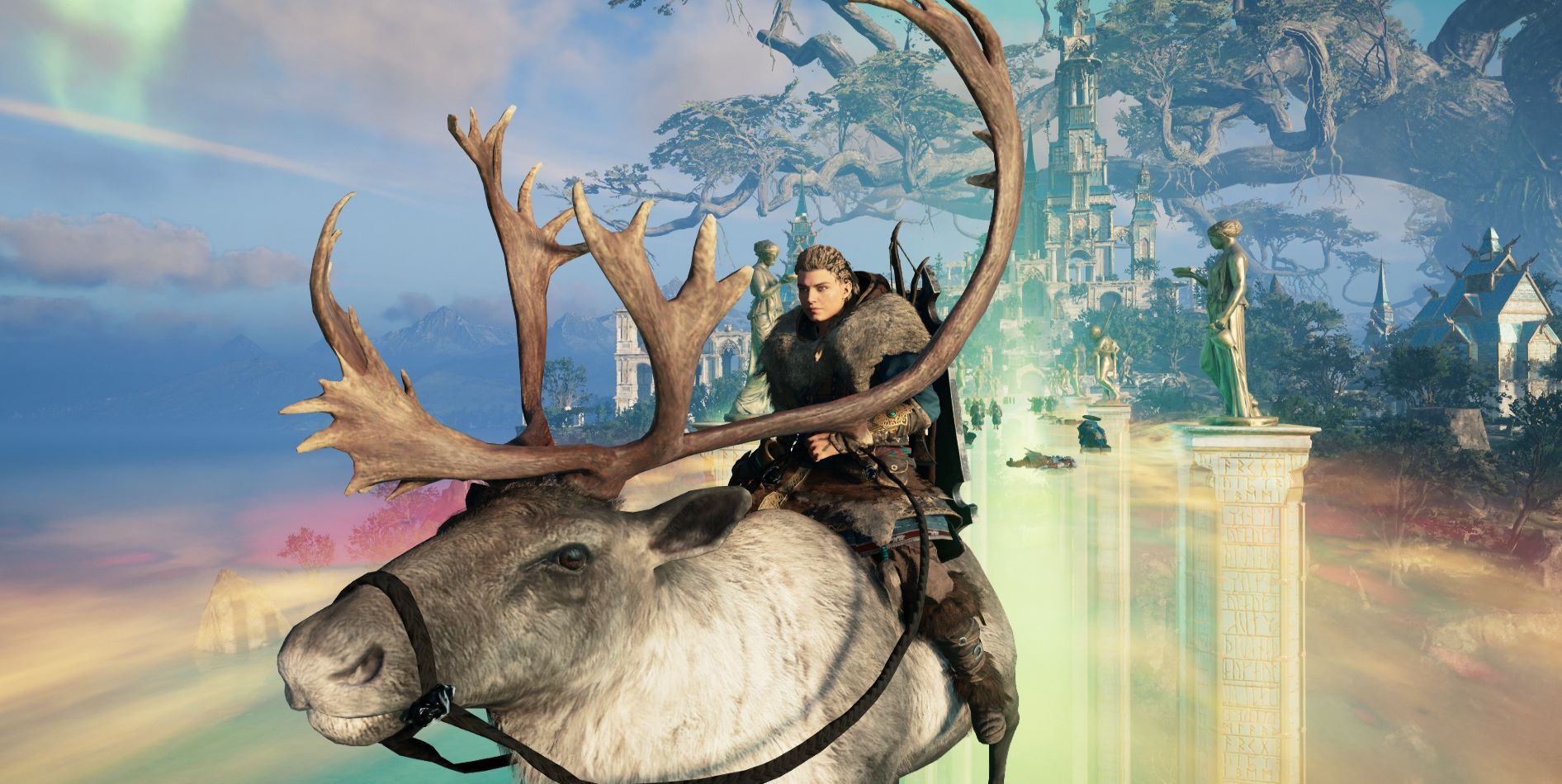 One of the coolest steeds you can have is a reindeer as Eivor looks absolutely majestic atop of it. The controls are exactly the same as a horse, but your view might be slightly obstructed by the antlers atop its head. This is a dream for Christmas fans who have always wondered what it would be like to ride one of these, and now they have the chance. 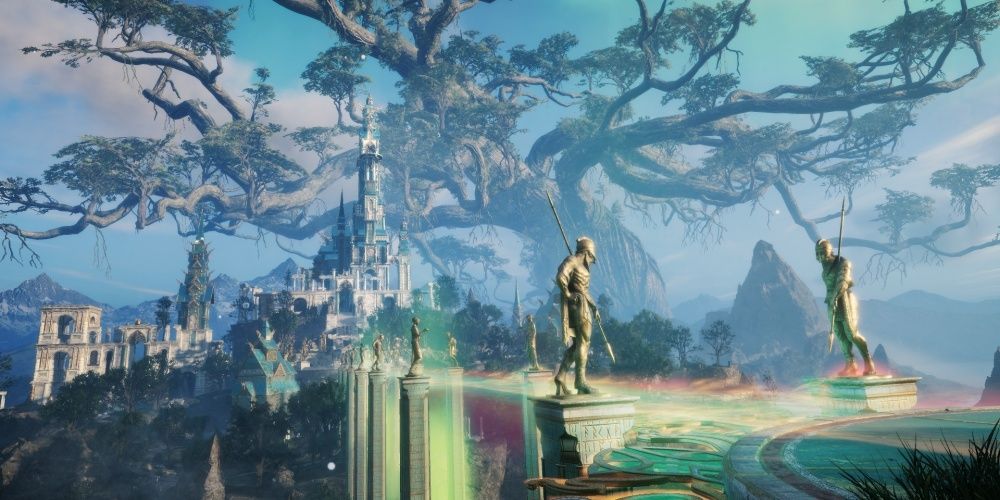 The reindeer is automatically given to you when you travel to Asgard or Jotunheim, so all you need to do is complete Valka’s tasks when she arrives at the settlement. The first one to take you to Asgard will have you collect plants right outside her hut near the waterfall.

The second quest will send you to complete The Cavern of Trials, and a full guide to it can be found here. Once you drink the concoctions and travel to these locations, all you have to do is call your steed to access it.

A raven might not seem like the greatest companion to have, but it does connect back to Norse Mythology as this was one of Odin’s signs. You will be able to have this bird follow you on all of your adventures, and even see through its eyes to help give you a lay of the land before entering a fight. 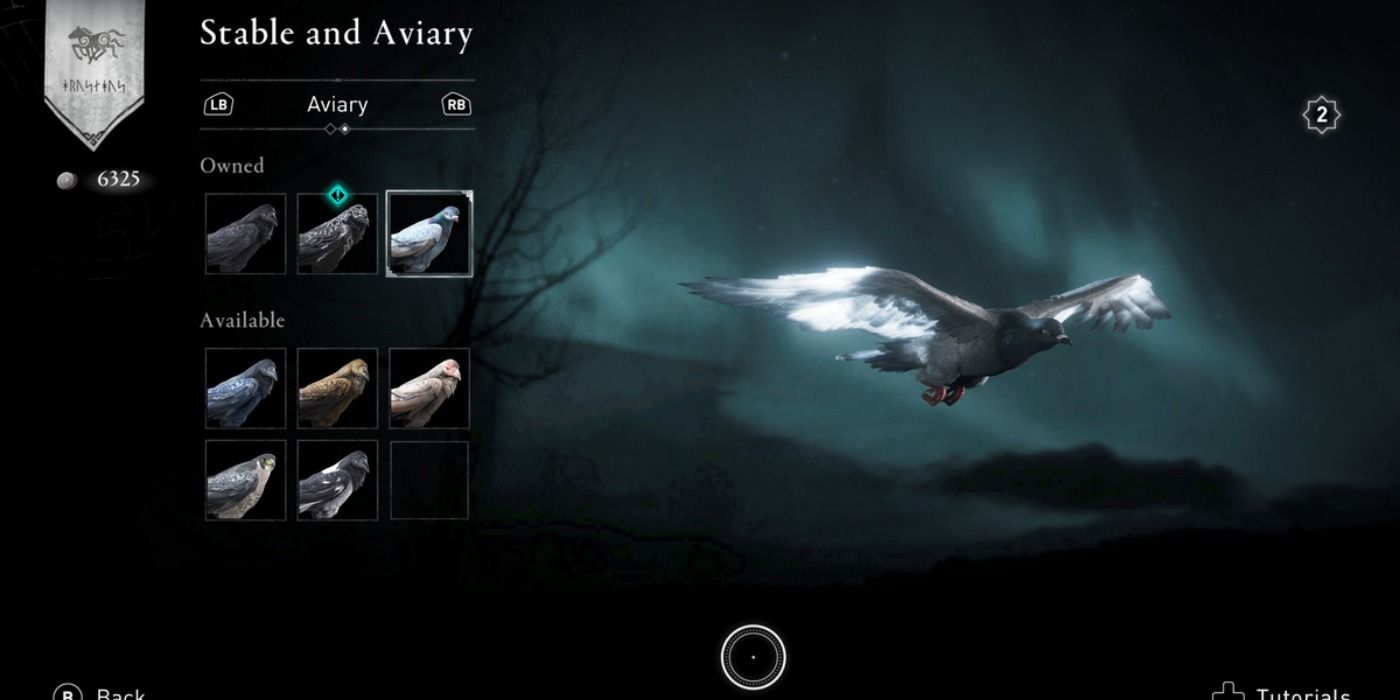 The Raven’s name is Synin and it is automatically given to you at the start of the game, but you can buy new skins for it at the stable or in Ubisoft’s store. A tap of a button will give you access to this bird’s view and there is even an ability called Raven Distraction that you can use to aid you in a fight. 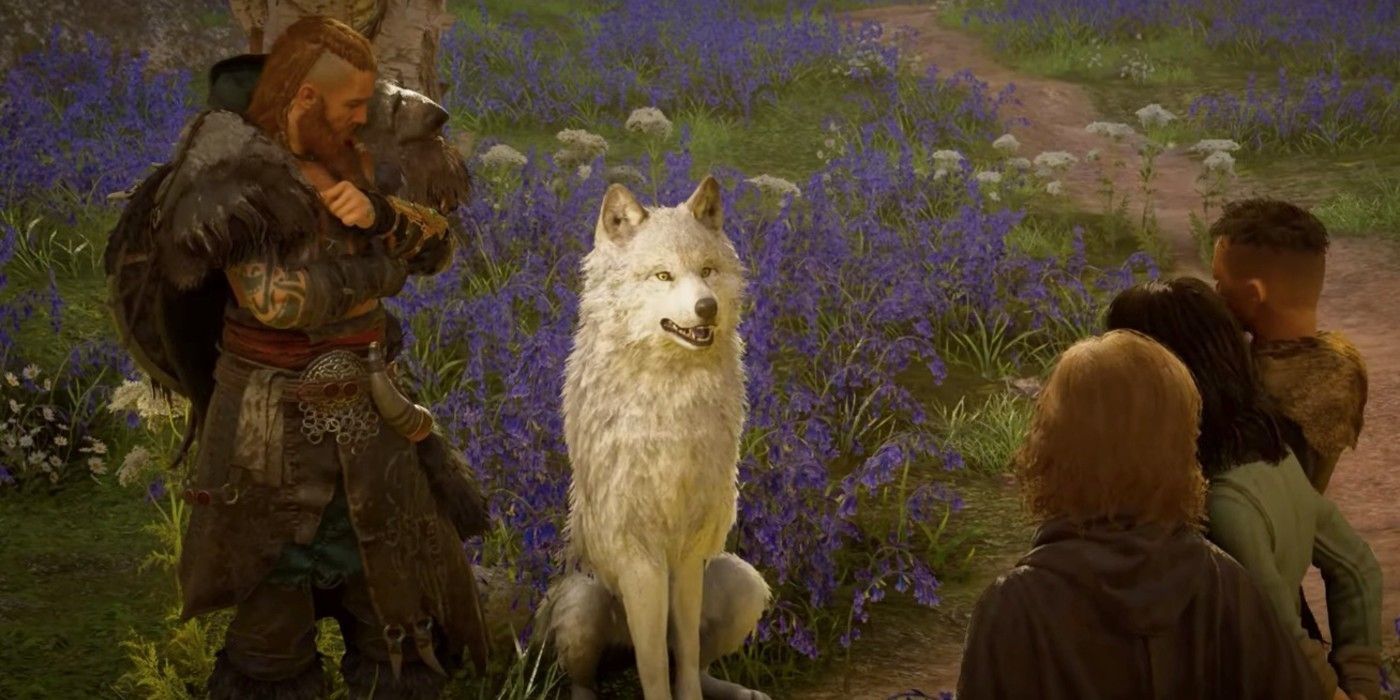 Some of the animals in Assassin’s Creed Valhalla are pretty neat, but none are as amazing as the domesticated white wolf you can add to your settlement. This beast will help you in battle as once you acquire it, you also receive an ability called Man’s Best Friend. You even have the option to name it Dwolfg, Mouse, or Chewy to make it truly yours. 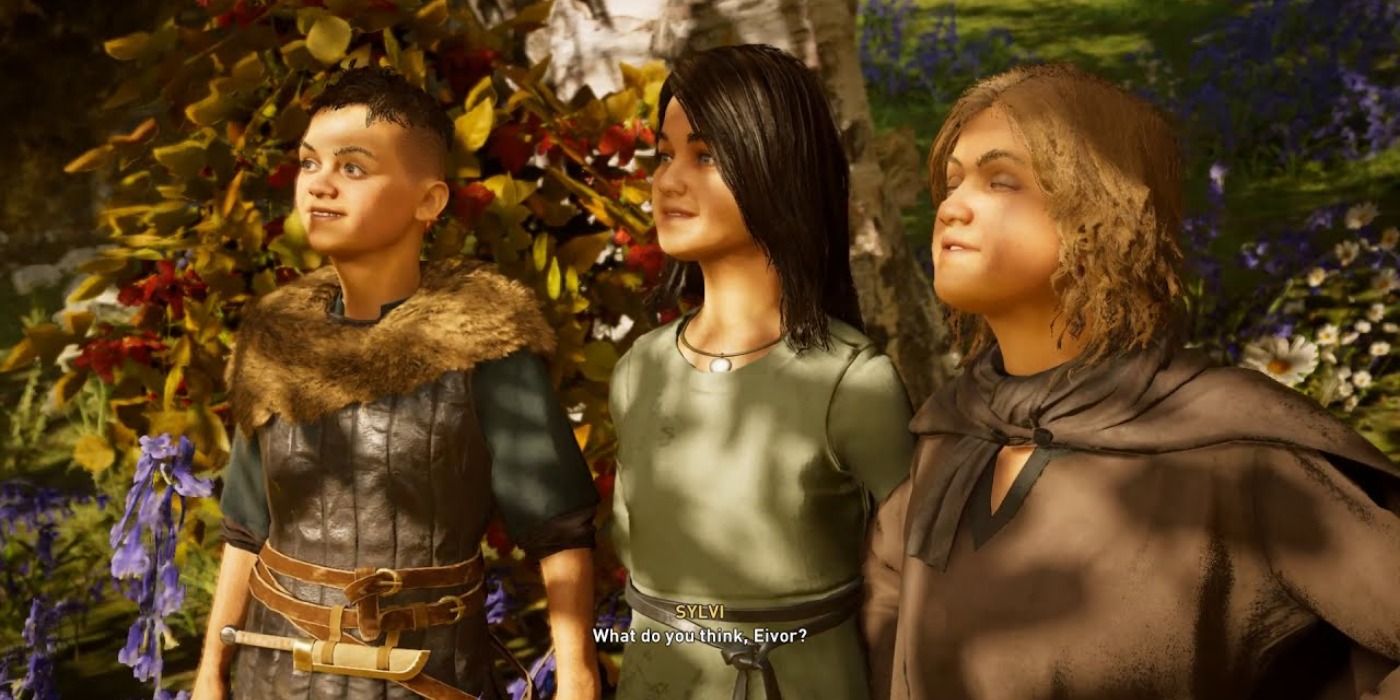 When you arrive in Ravensthorpe you will want to talk to a child named Knud in the longhouse and he will give you a new quest called A Little Problem. He will ask you to follow him, where you will then learn that a wolf is trapped in the bottom of a house and they want you to free it.

You will first need to acquire the key, which can be found behind the back of the house in the belly of a wild boar. Once it is killed and you collect the key, then open the door to the house, follow the stairs to the basement, then destroy the door to its cage.

The wolf will run out and seem to head back to life in the woods. However, when you are then attacked on your way home by a pack of wolves, but the white wolf you freed will help defeat them. It will then be added to your settlement as a reward. 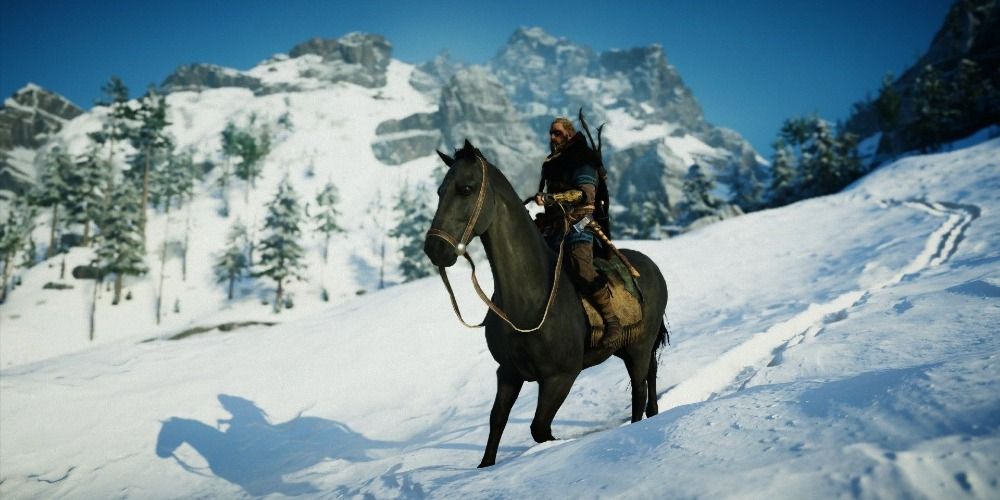 Horses are majestic and magical creatures, especially when ridden, and in Assassin’s Creed Valhalla you can upgrade their skill to make them even better. Eivor has the option to buy new mounts, both in-game with silver and in the store by purchasing Helix Credits. Occasionally, you might even be lucky enough to find a new mount skin in Reda’s shop to purchase with opals! 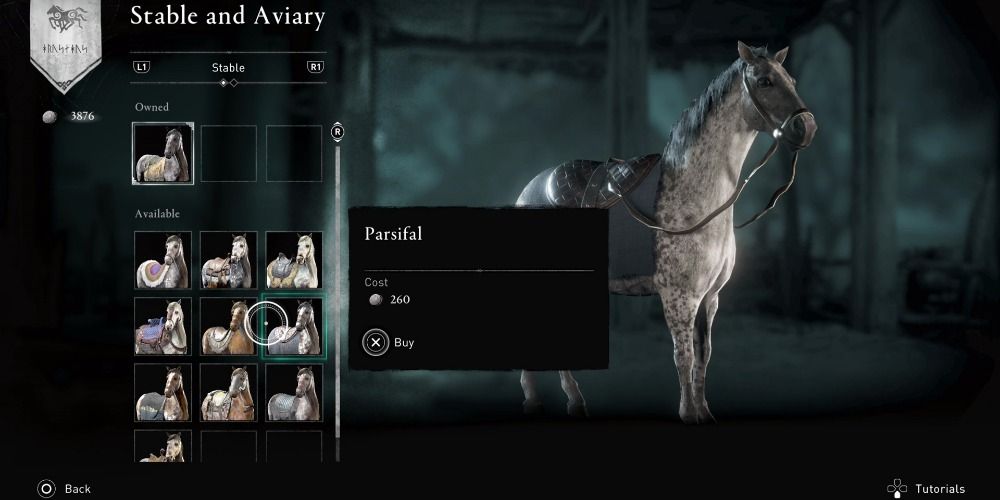 A horse is automatically given to you at the beginning of the game, but if you want to acquire a new skin for your mount then you have to upgrade the stable in Ravensthorpe. 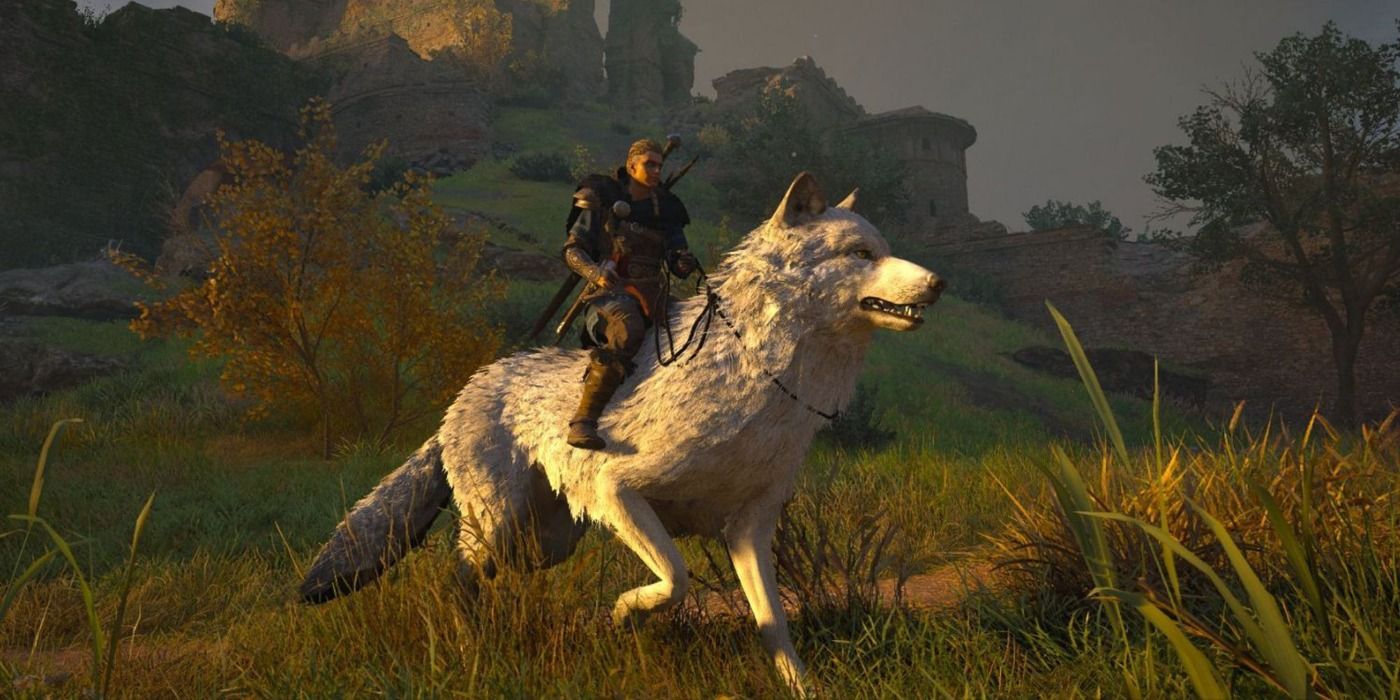 You might be able to ride a horse and reindeer, but nothing will beat being able to ride a wolf. It will change how you view this game as it takes your enjoyment to the next level. This brings it into a new era as you become obsessed with this new mount that will combine your love for dogs and fast travel into one.

How To Acquire it 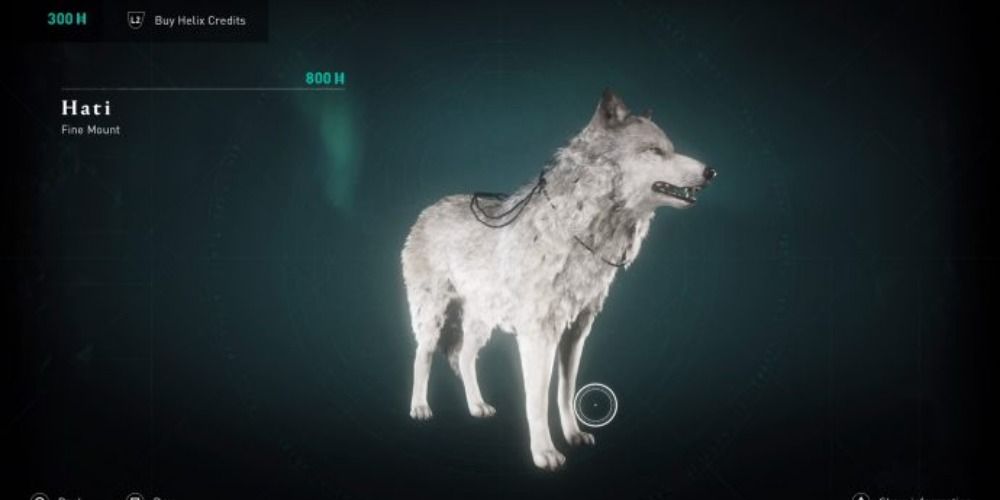 You can acquire this one of two ways, but both require a microtransaction. It will cost you 800 Helix Credits to buy it from the Ubisoft store, or if you haven’t bought the game yet then you can invest in the Ultimate Edition of the game. 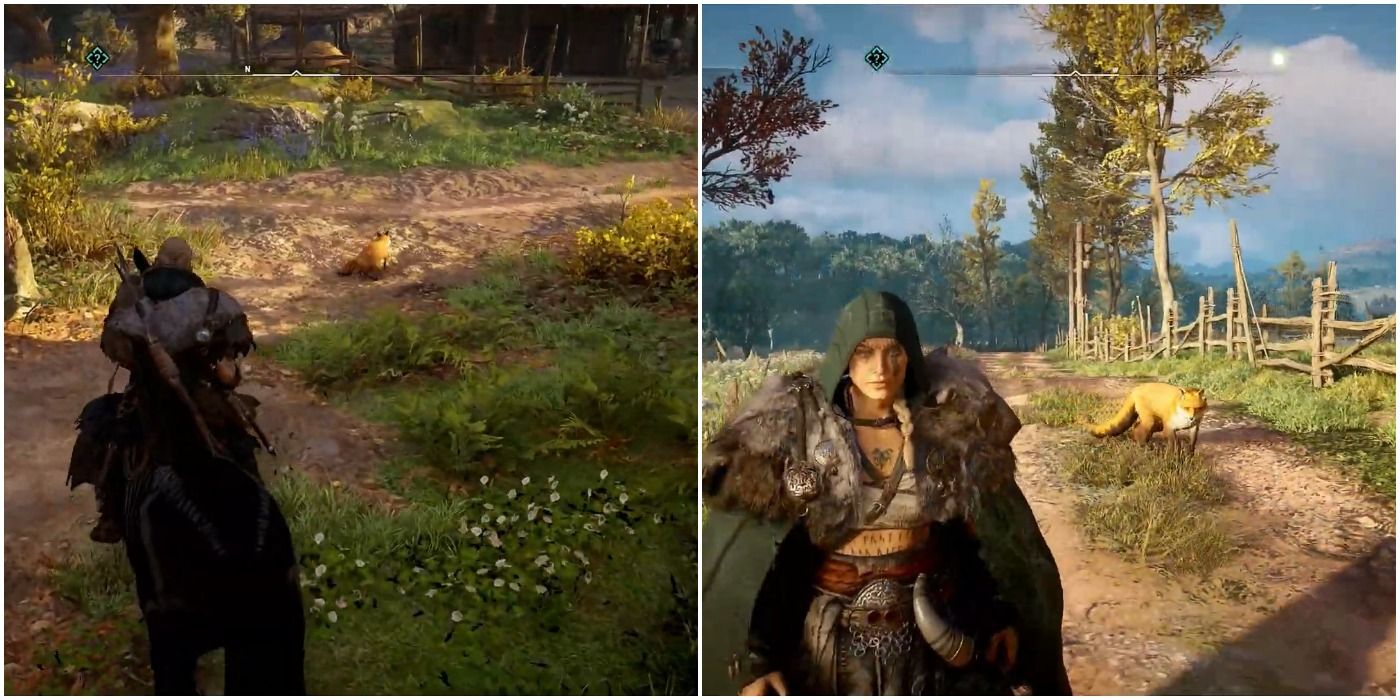 A fox might not be on the top of your list of animals to own, but it is a wild animal that adds to the Viking appeal of this game. It is quite cute when you think about it, and its name is even Dandelion Puff. This fox will be found in your settlement once unlocked for you to enjoy until you beat the game. 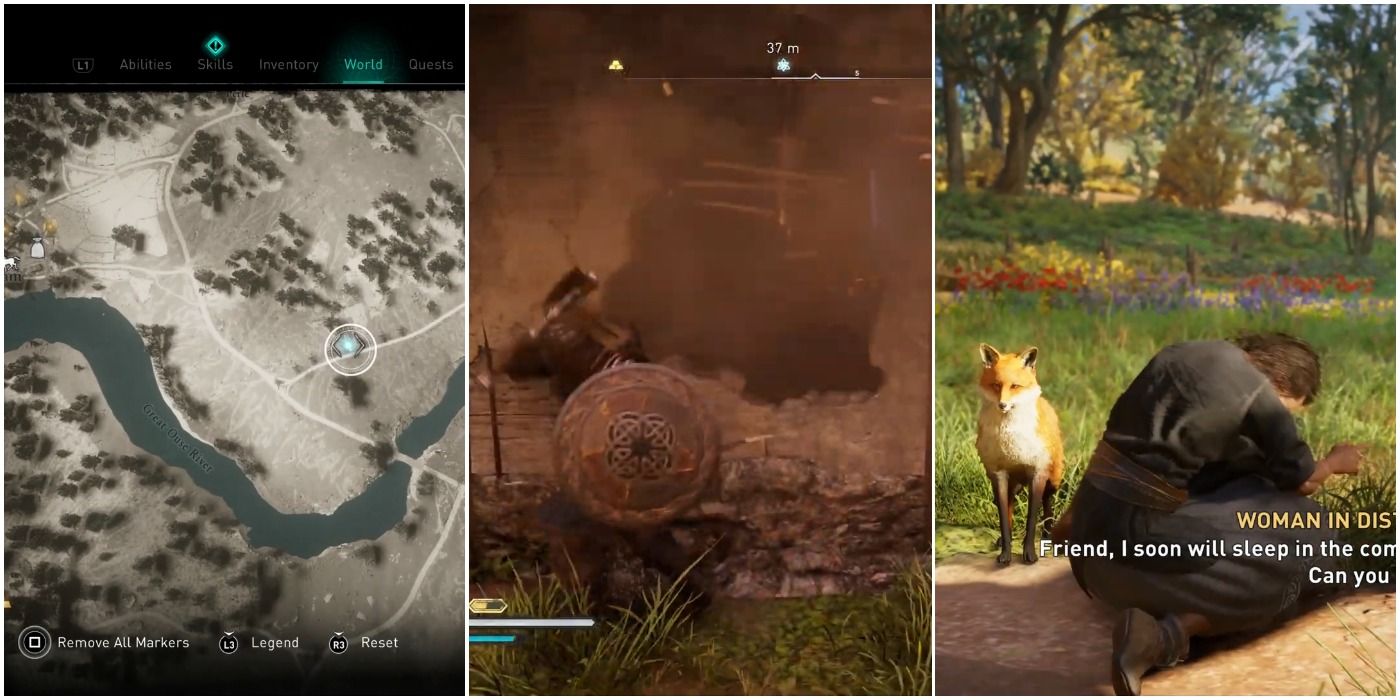 There is a quest in Oxenefordscire, east of Buckingham, called A Dog’s Rescue. You can read how to solve this World Event in this guide, so you can add Dandelion Puff to your Ravensthorpe settlement!

Next: 10 Things Everyone Completely Missed In Assassin’s Creed Valhalla 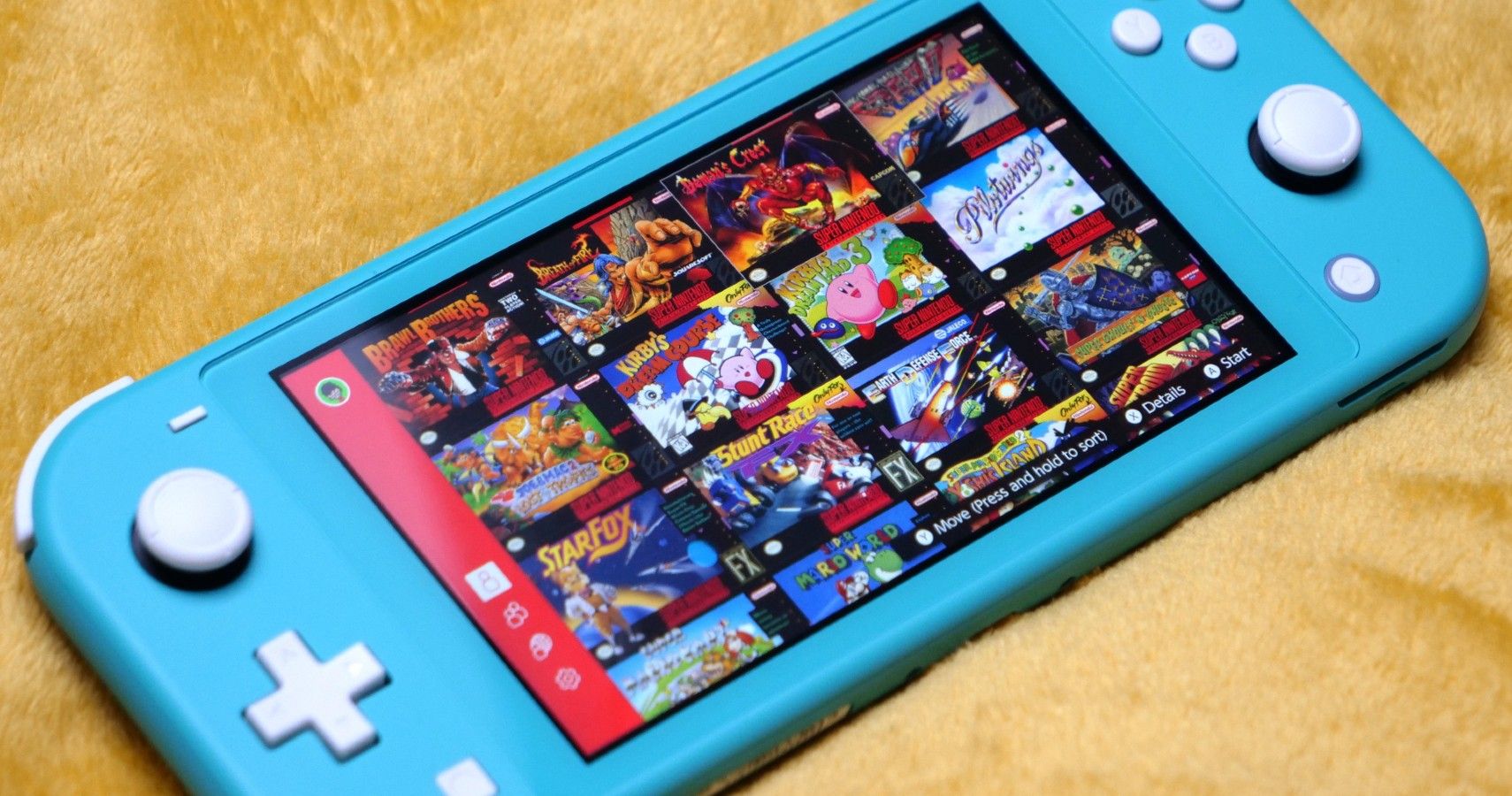 Rebecca O’Neill is a reader and writer based in Ohio, near the heart of the CLE. She enjoys starting fires in her kitchen and collecting pins when she’s not writing for Valnet, Inc, as an Organic List Writer. She writes for her blog, Creative Measures, and works towards the completion of her fantasy novel.