Assassin’s Creed Valhalla Wrath Of The Druids Walkthrough: How To Complete Into The Fog

Into the Fog is the next main quest in Assassin’s Creed Valhalla Wrath of the Druids after Potion of Blood, as well as the longest mission you’ll have encountered in the all new Irish expansion yet.

Due to how lengthy this quest is, it’s very likely that a lot of people will have trouble with it somewhere along the way. It involves combat, tracking, exploration, dialogue, and all the other good stuff that often appears in a standout RPG mission.

So, whether you’re struggling to find The Cursed, don’t know the location of the cave in Tuam, or just can’t seem to kill the puca, we’ve got you covered.

Here’s our detailed Assassin’s Creed Valhalla Wrath of the Druids Into the Fog guide.

Wrath Of The Druids Walkthrough: How To Complete Into The Fog 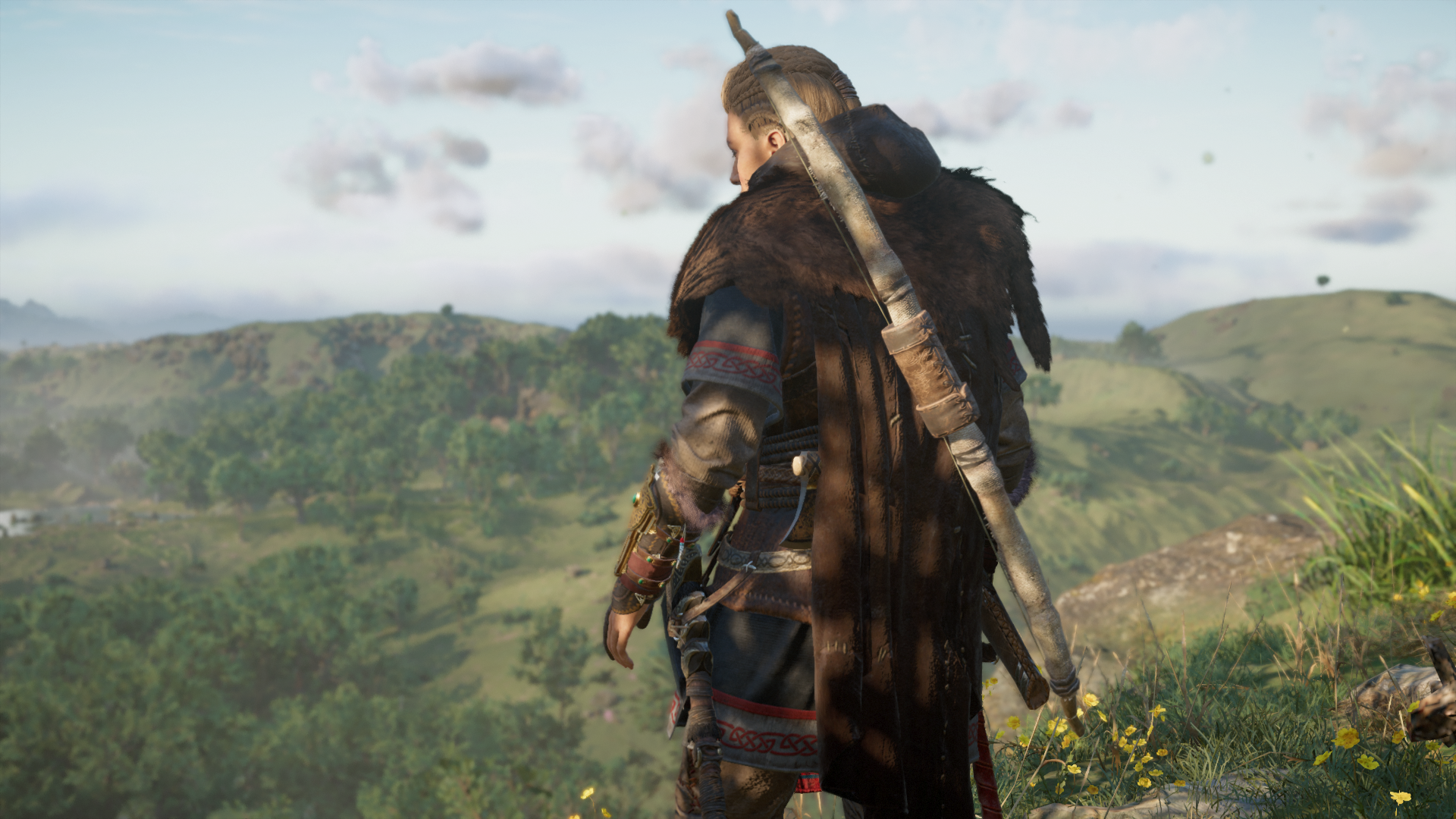 The first thing you need to do in Into the Fog is head towards the cottage in Tuam where The Cursed is supposedly hiding. This will be marked on your map, meaning it shouldn’t be too difficult to find.

Once you arrive in Tuam, you will immediately enter a distrust area. I recommend using stealth to kill all of the enemies here, who will be highlighted as red silhouettes in Odin’s sight. These enemies will attack on sight and are very annoying to take on when they group up, so be sure to divide and conquer for best results.

The cottage you’re looking for is in the middle of the village, although the door is unfortunately locked. The key is located on the windowsill of the southernmost house in Tuam and will be conveniently highlighted with a key symbol if you use Odin’s sight in the main village.

Collect the key and go into the locked house. You can loot it for texts, an opal, and more, but unfortunately The Cursed isn’t here. Read the letter on the desk and you will learn about a cavern located under the village. This can be tough to find, so we’ve included a screenshot highlighting the exact location of the cavern on the map below. 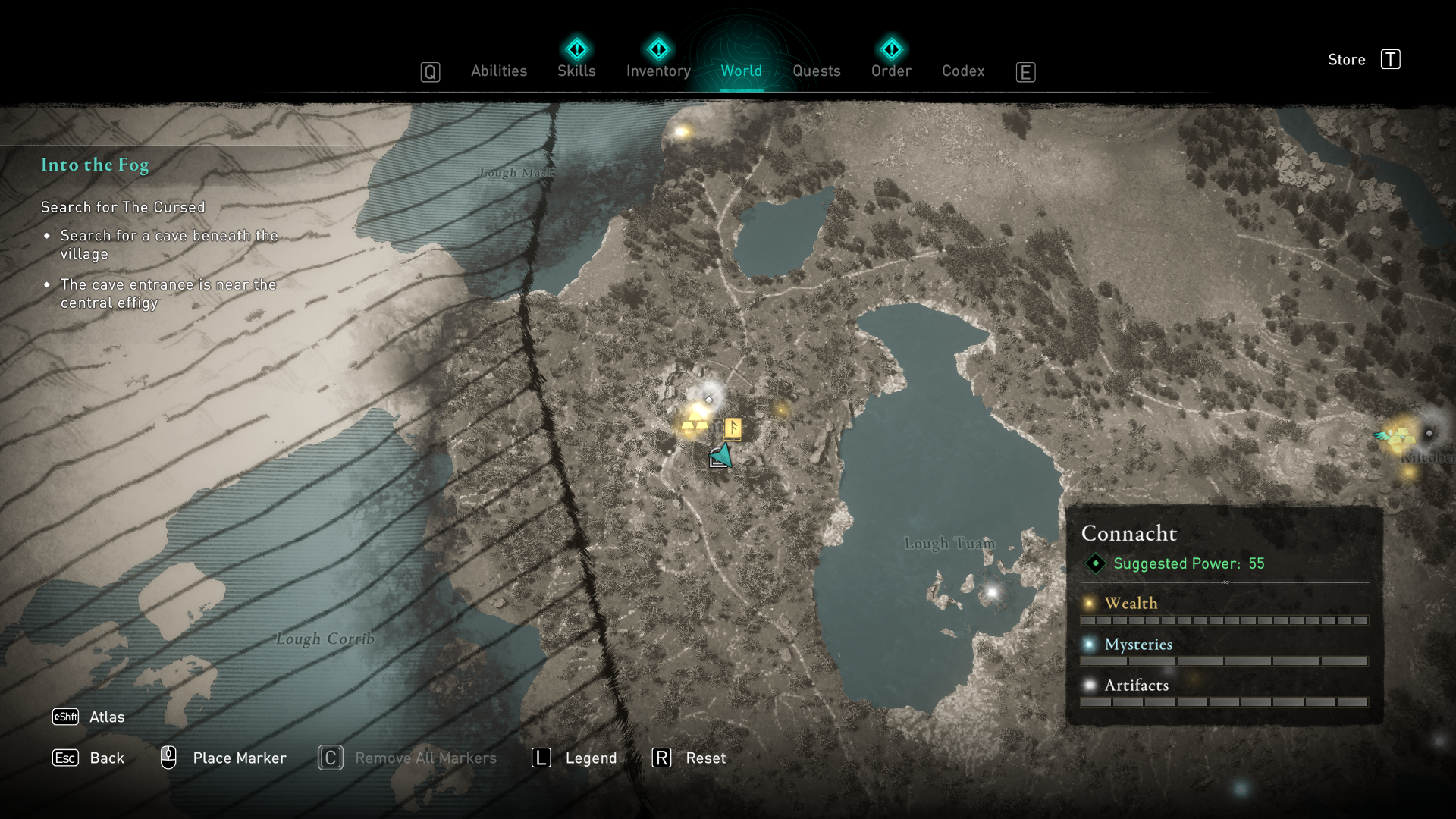 Heading to this area will bring you to a chasm. While it looks like a jump to your death, you can climb down the wall to a grassy platform. Once you reach this, don’t jump further – simply go through the crack in the wall in front of you. Also, keep an eye out for traps once you’re inside, as they’re everywhere and really take a toll on your health bar.

Your first enemy here will be a bear. It’s bulky and has lots of health, plus it hits like a truck. Luckily, it’s very slow, so bait its attacks and whale on it while it’s in its recovery animation. Move forward to the next room and you will discover that the door is barred.

You should see a wooden crate immediately to the left of the door. Climb up on it and shimmy through the gap above. This will put you in prime position to assassinate the druid below you, who is holding a key.

Once you take care of this druid, kill the rest of the enemies in the room and start looking for clues. There are three to interact with – a note on the table in front of you, an object next to the cell with an Irishman in it, and the Irishman himself, who will provide helpful information on The Cursed’s identity. Go around to the left of the room as you walk out of the cell you just freed the Irishman from and follow the path up. Kill the two druids here and walk towards the door. Hack the lock off with your weapons and exit the caves, which will lead back to Tuam. Now you can meet Ciara just south of the village – conveniently, she is also highlighted by a quest marker.

Go with Ciara towards the next quest marker to find the puca. Examine the tracks on the ground at your destination and you will be able to trail the puca. At this point you can simply follow the new quest marker until you reach a boss arena, at which point you need to take on the puca, who has taken on a lycanthropic form. Prioritize dodging and only hit it when it’s safe and you should be able to take it down in no time. Once it runs away, follow the second route out of the arena – not the way you came in – and you will arrive at the location of the ritual. The Cursed is here with all of her subordinates, and she is not an easy adversary to overcome. 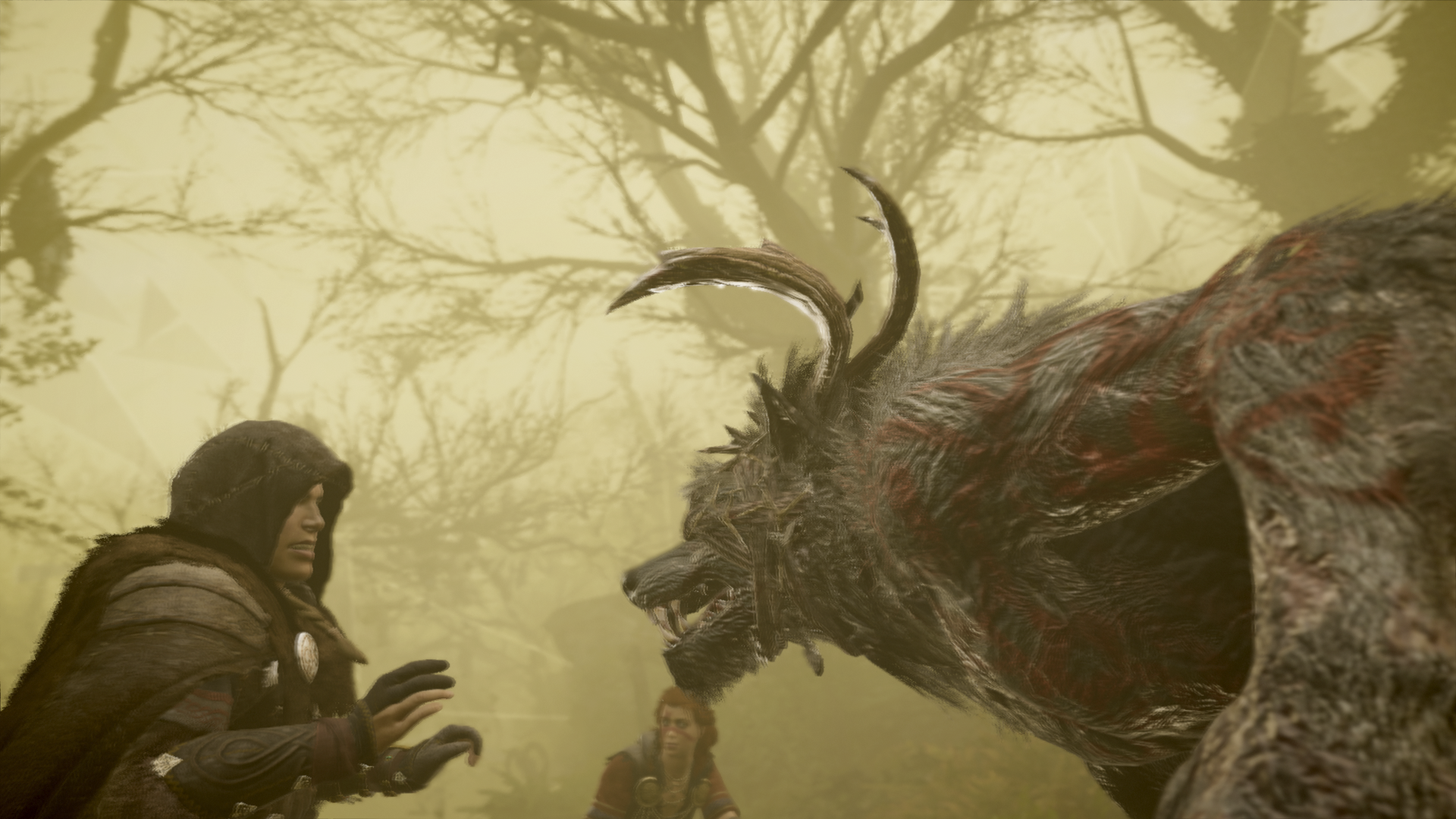 My advice is that you shouldn’t bother with stealth here unless you are high level, have specifically built your character that way, or are extremely confident. This is because The Cursed is very easily alerted and can quickly summon her lackeys to close you down when you are in extremely precarious positions. The best strategy here is to aggro The Cursed herself and immediately leave the way you came in. Only The Cursed and one puca will follow, and the puca should revert back to its less aggressive form outside of the ritual circle. This makes it way less threatening, to the extent that you should be able to focus all of your energy on The Cursed. Once you’ve beaten her one on one and taken care of the puca, head back in to finish off the remaining mob. Ciara will help you with this and most of them are fairly weak, so it shouldn’t be too tough after taking down the main boss.

Once everyone here is dead, confront The Cursed and a cutscene will play. After it’s over, you will need to meet Ciara at a distant quest marker. You will once again have the option to romance her – unlike last time, you can actually follow through on this occasion, so if you want to romance Ciara in Wrath of the Druids, now is your chance. The next main quest is The Northern Reach.