Assassin’s Creed Valhalla Wrath Of The Druids Walkthrough: How To Complete Potion Of Blood

Potion of Blood is the next main quest in Assassin’s Creed Valhalla Wrath of the Druids after Foothold in Connacht, and probably the most complex individual mission in the Irish expansion so far.

This takes place immediately after capturing Cashelore and has to do with the fact that a large amount of Flann Sinna’s men have mysteriously fallen ill. Poison is the suspected cause, and Barid is the one being blamed.

Again, this is a particularly lengthy quest with a huge amount of twists and turns, meaning there are various places you could be stuck. Whether you’re struggling to find Deirdre’s hut, have no idea how to get to Port Auley, or can’t seem to effectively find and kill The Wren, we’ve got you covered.

Wrath Of The Druids Walkthrough: How To Complete Potion Of Blood 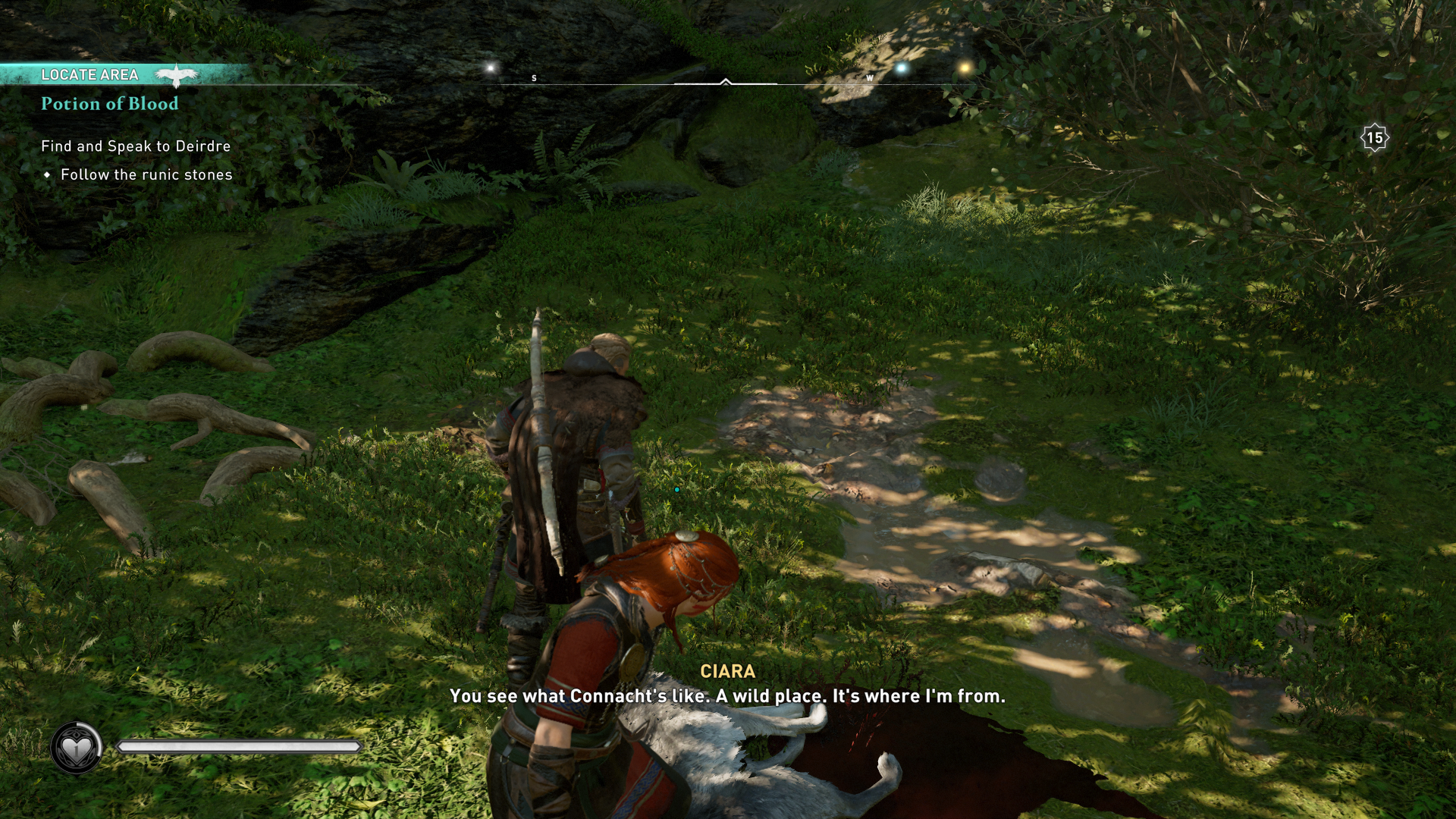 Your first objective in Potion of Blood is to find and speak to Barid, who will be marked by a quest marker. A cutscene will play, explaining that Flann Sinna’s men have been poisoned and that Barid appears to be the culprit.

Obviously this is not the case, but Flann Sinna is acting rash in order to protect his men. In order to prove Barid’s innocence, you must talk to Ciara, who will be highlighted on your map. Ciara will escort you towards her friend’s house, who can supposedly cure any ailment. You will eventually reach a point on the path where she stops in her tracks – at this point, dismount your horse, wolf, or big cat and make your way down the path lined with tall, engraved stones on foot. Halfway along this path, you will be ambushed by wolves, which confirms that you are on the right track.

At the end of the path you will reach Deirdre’s hut. Deirdre is a druid and will explain that obtaining an amber shard soaked in the blood of a member of the Children of Danu will cure any poison. The member you are looking for information on is The Wren – you will now be tasked with heading to the abandoned cottage at Port Auley, which is located in the position highlighted in the map screenshot below. 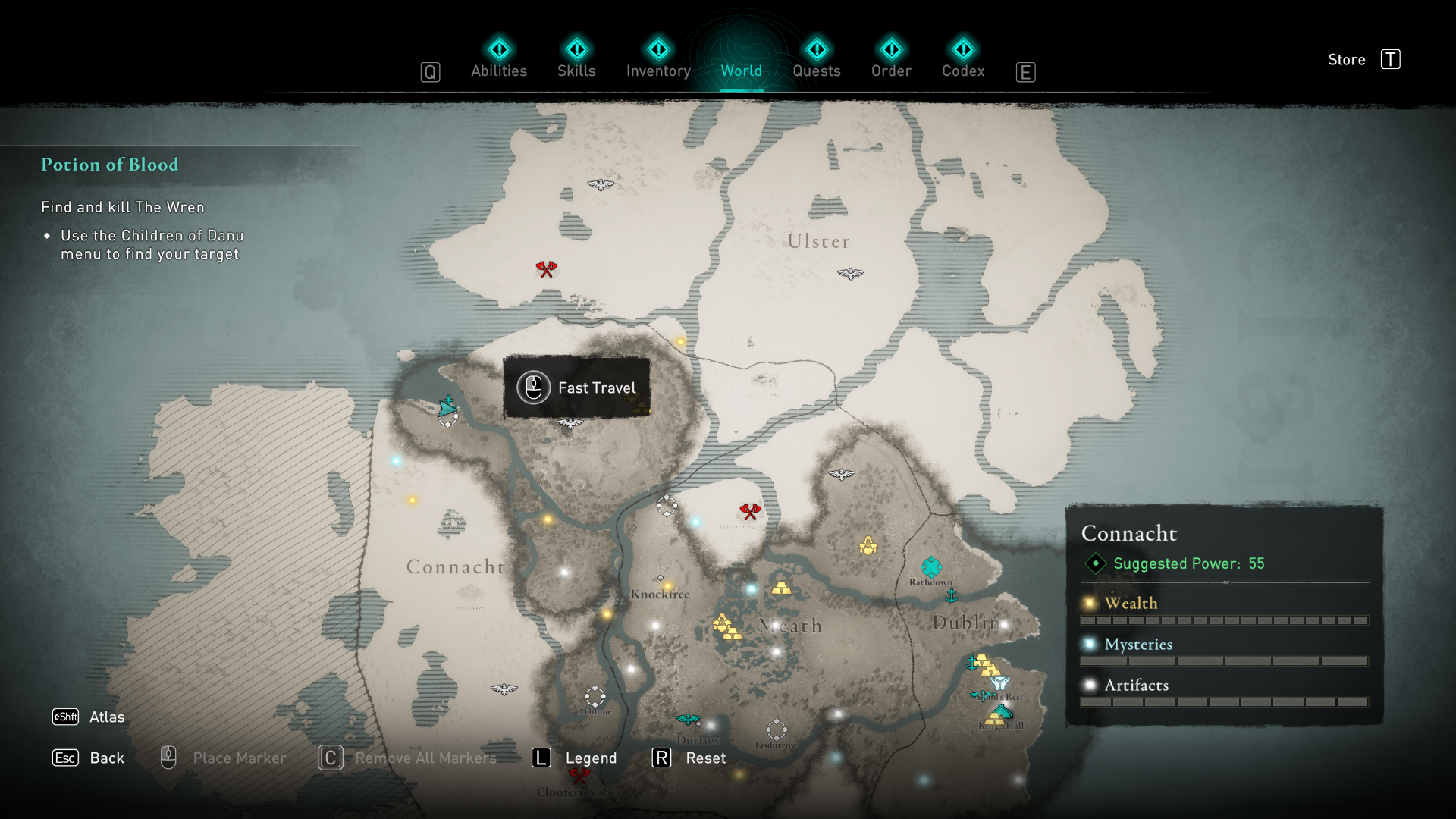 After obtaining this clue about The Wren, you will need to go to an island on Lough Gara. This is located at the point highlighted in the screenshot below. 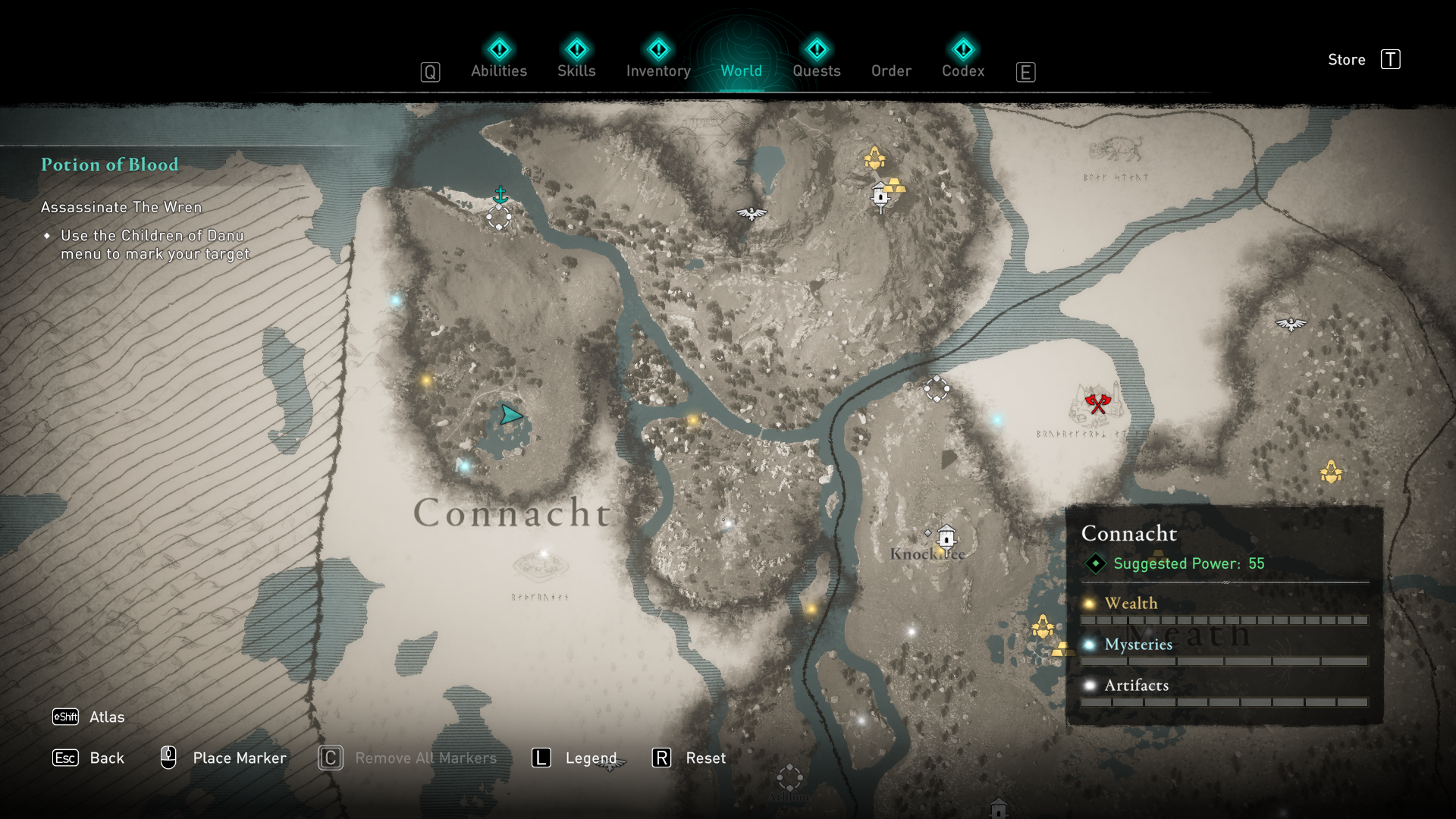 As soon as you arrive here, you need to read the letter on the crate located on the small outcropping north of the island. The crate you’re looking for also has a deer skull on it – here’s another screenshot to help you along your way. 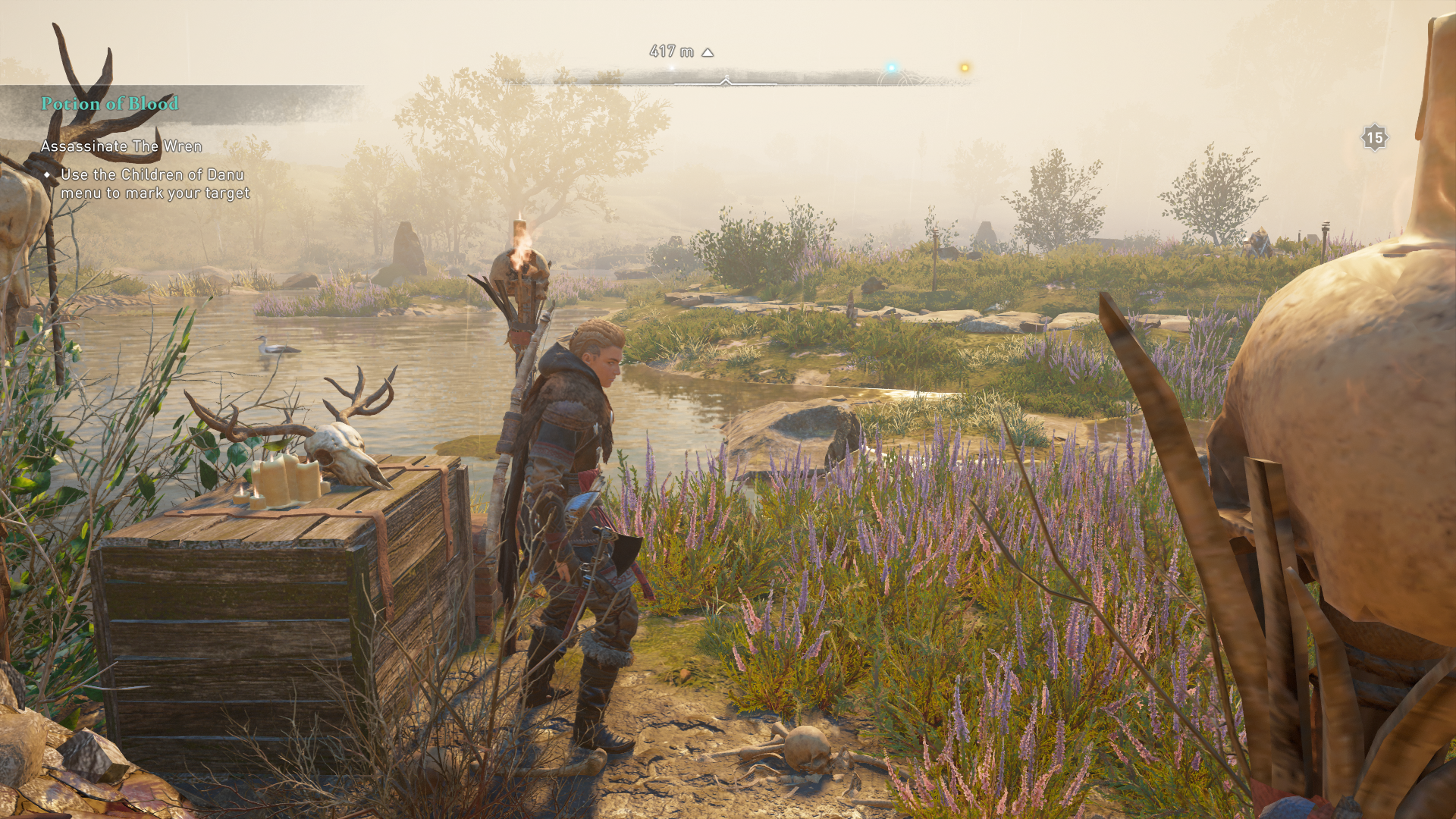 Once you read the letter, you will now have enough information to locate The Wren. Go into the Order of the Ancients menu and access the Children of Danu variant designed for Wrath of the Druids. Go to the portrait for The Wren and open it, From here, you can select her as your target, which will add a gold quest marker to your map.

Here are two screenshots highlighting the exact location of The Wren, both on the map and in the overworld. 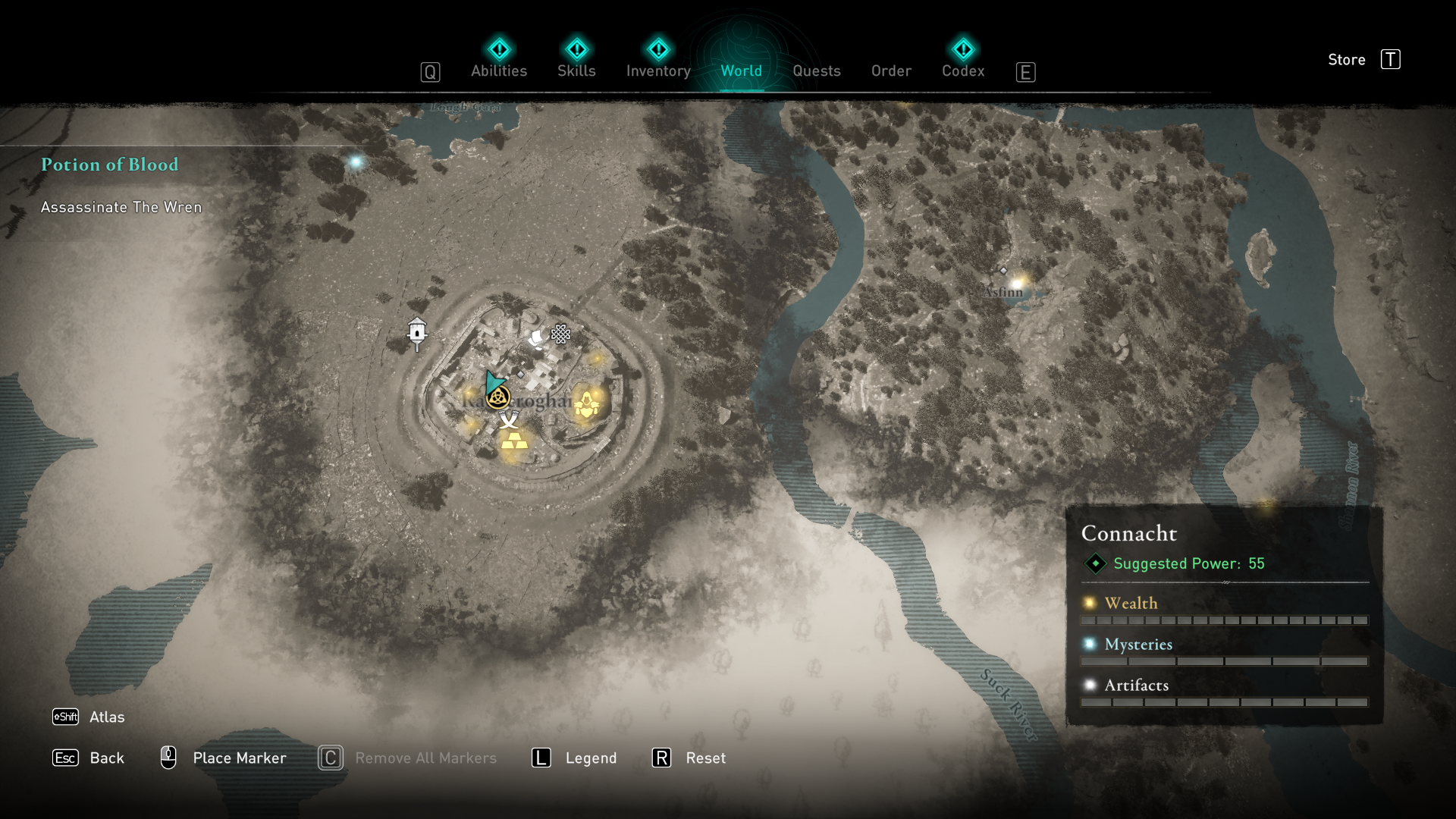 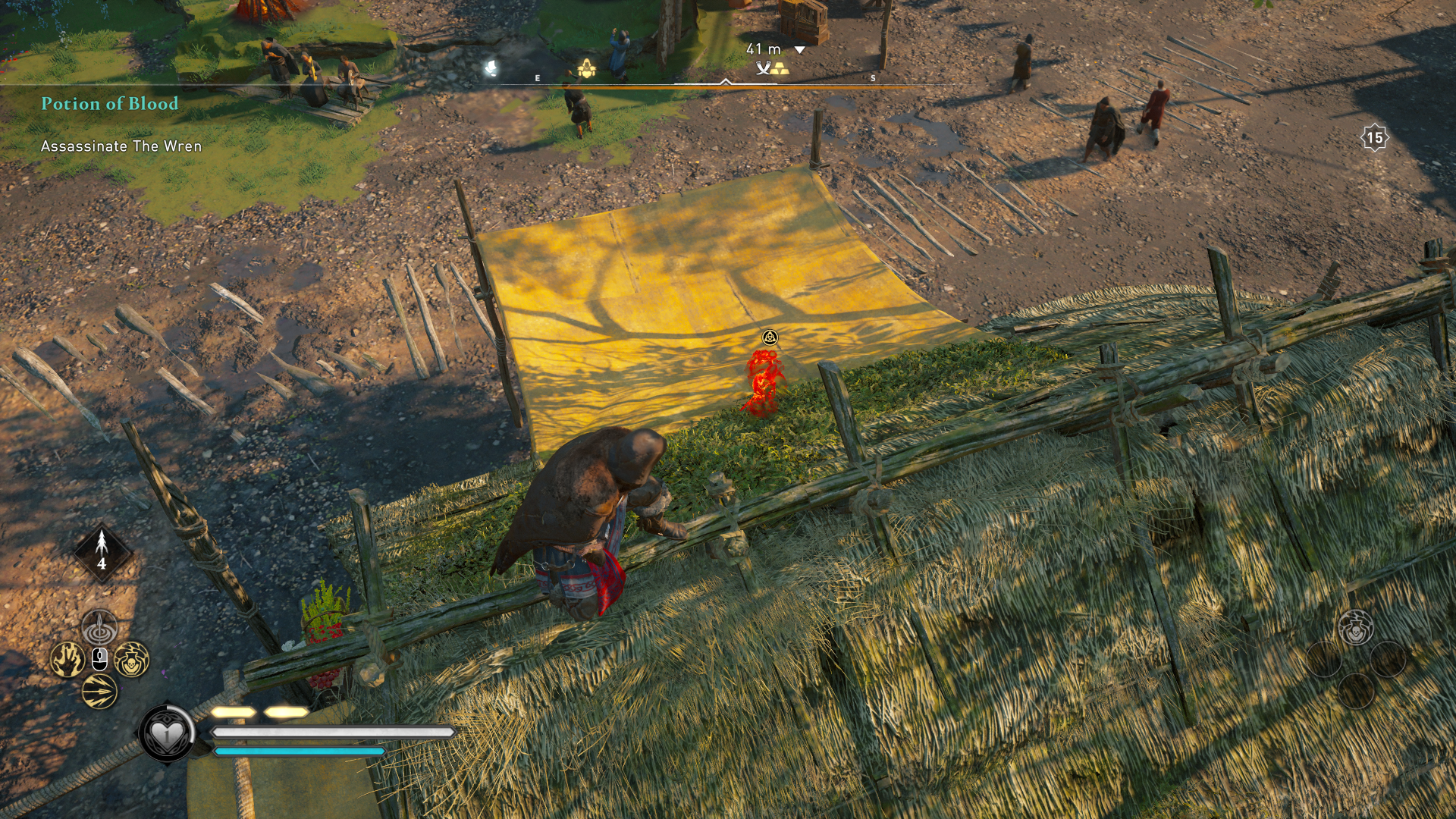 The Wren has a bodyguard next to her, so the best way to incapacitate her is to use an arrow ability that can kill her with a single headshot. However, it’s important to remember that you need to confirm the kill – I recommend using an area-of-effect arrow shot to the head, which should stun the guard next to her. Jump down, confirm the kill, and scale this house in order to quickly escape the settlement by hopping from rooftop to rooftop. Once you’re safe, head back to Deirdre’s hut.

Deirdre will take the amber shard and brew the cure. A cutscene will play, signalling the end of the quest. The next main quest after Potion of Blood is Into The Fog, which will be the longest quest in the Wrath of the Druids expansion yet.