Best Deep Rock Galactic Mods And How To Install Them

Deep Rock Galactic is an independently developed game with amazing qualities as is, but who doesn't love mods? Ghost Ship Games has included mod support directly in the game using the website mod.io. Due to this in-game support, modding is made easy. This list showcases some of the best and most useful Deep Rock Galactic mods out there for players.

Some mods will help you visualize better in dark caves, others allow you to spawn hundreds of Huuli Hoarders. These mods can be game-changing or silly fun. Once you've prestiged your dwarves and completed the current seasonal pass, you're bound to wonder what to do next. That's when it's time to get into the modding scene. Here we look at how to install mods, and what you'll want to look for first. 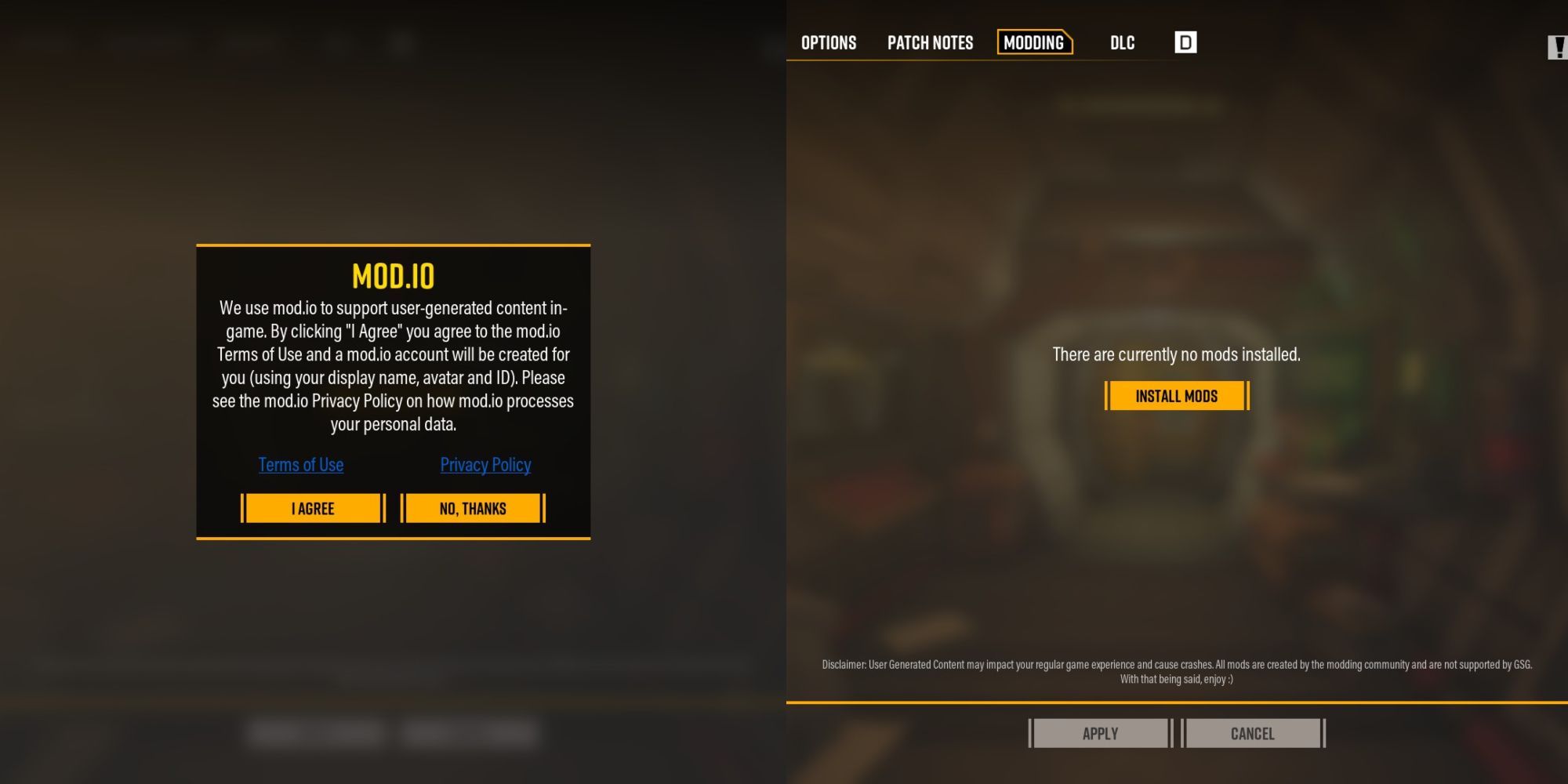 You'll need a Steam account and access to drg.mod.io. Begin by opening Deep Rock Galactic, press the pause button and notice the Modding tab at the top of the screen. You'll be prompted to agree to some terms of service and then be redirected to mod.io, where you get your mods.

You must first log in to an account – you can link your Steam account to mod.io. Then, all you have to do is subscribe to any mod on the website, then the next time you log into Deep Rock Galactic, it should be there in the Modding tab when pressing ESC. It will automatically be enabled.

While in a party and playing the game, you cannot enable or disable your mods. 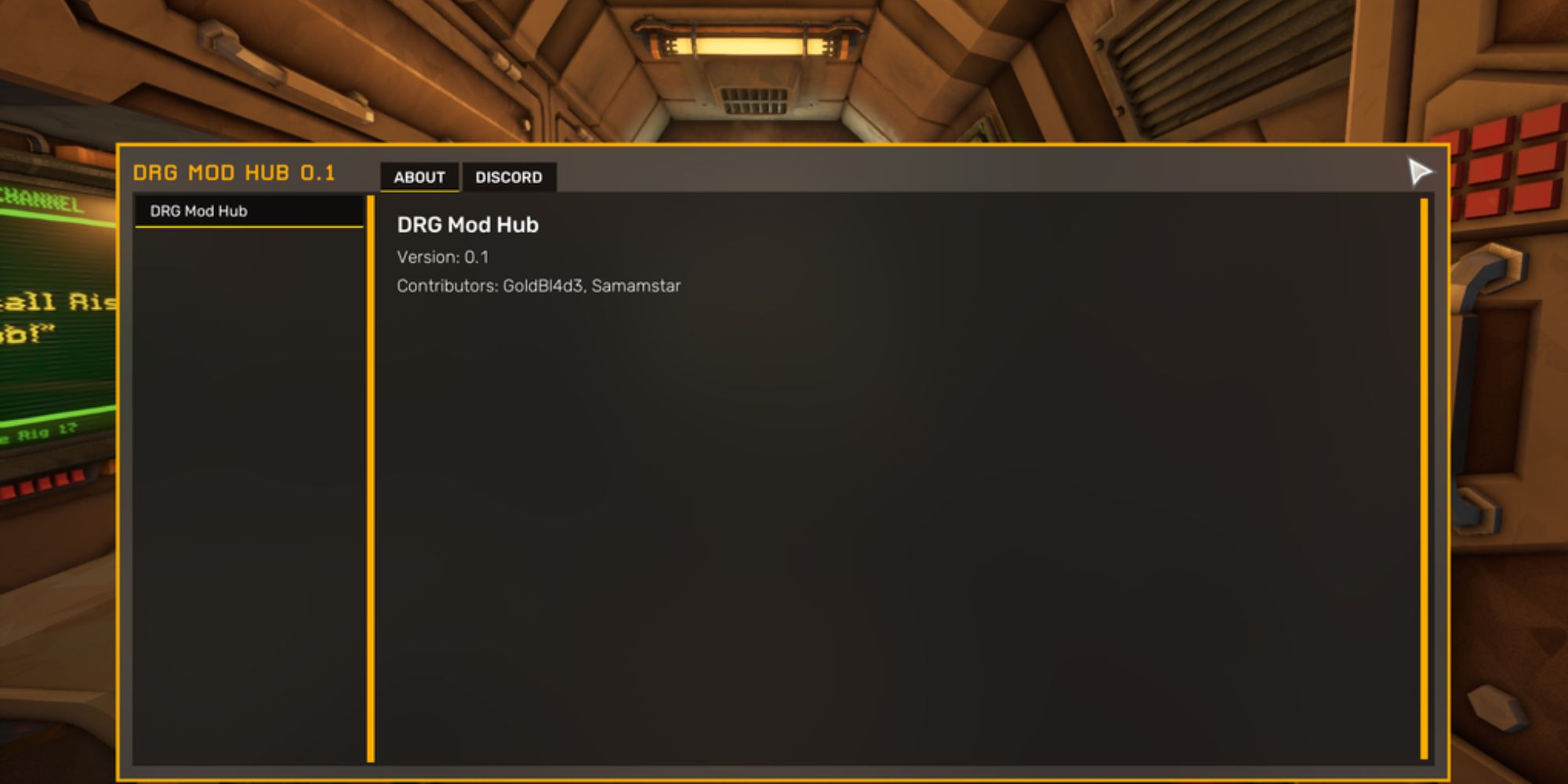 Mod Hub is the general hub players get when actively using mods in Deep Rock Galactic. It's not necessary, not unless a specific mod says it's required, but is useful.

Mod Hub essentially makes your active modding experience easier and more friendly than the game provides by default. All your mods will be in one place in a better format. 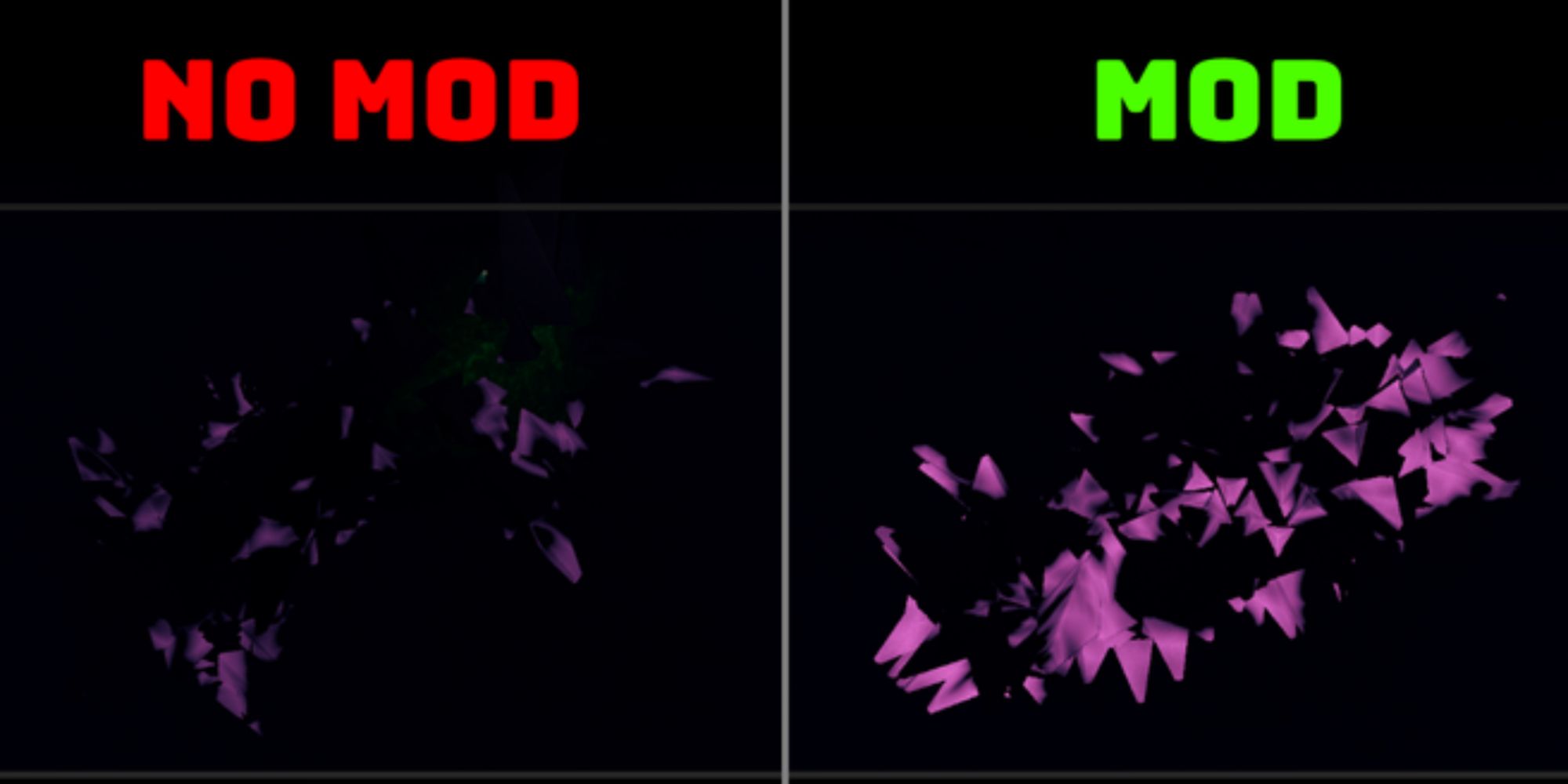 It is very hard to see in this game, even with your gamma turned all the way up. Each dwarf has four flares to toss so that you can see more, but these are barely enough. Scout's flare fun is the best lighting tool there is, but what if you could traverse through caves without the need for a Scout or a keen eye?

The mod allows you to notice shining ore from greater distances. Usually, you can barely see ore in the dark, if at all. With this mod, you won't even need a flare to comprehend where ore is on the walls and ceiling. This also means you won't miss as much loot as before 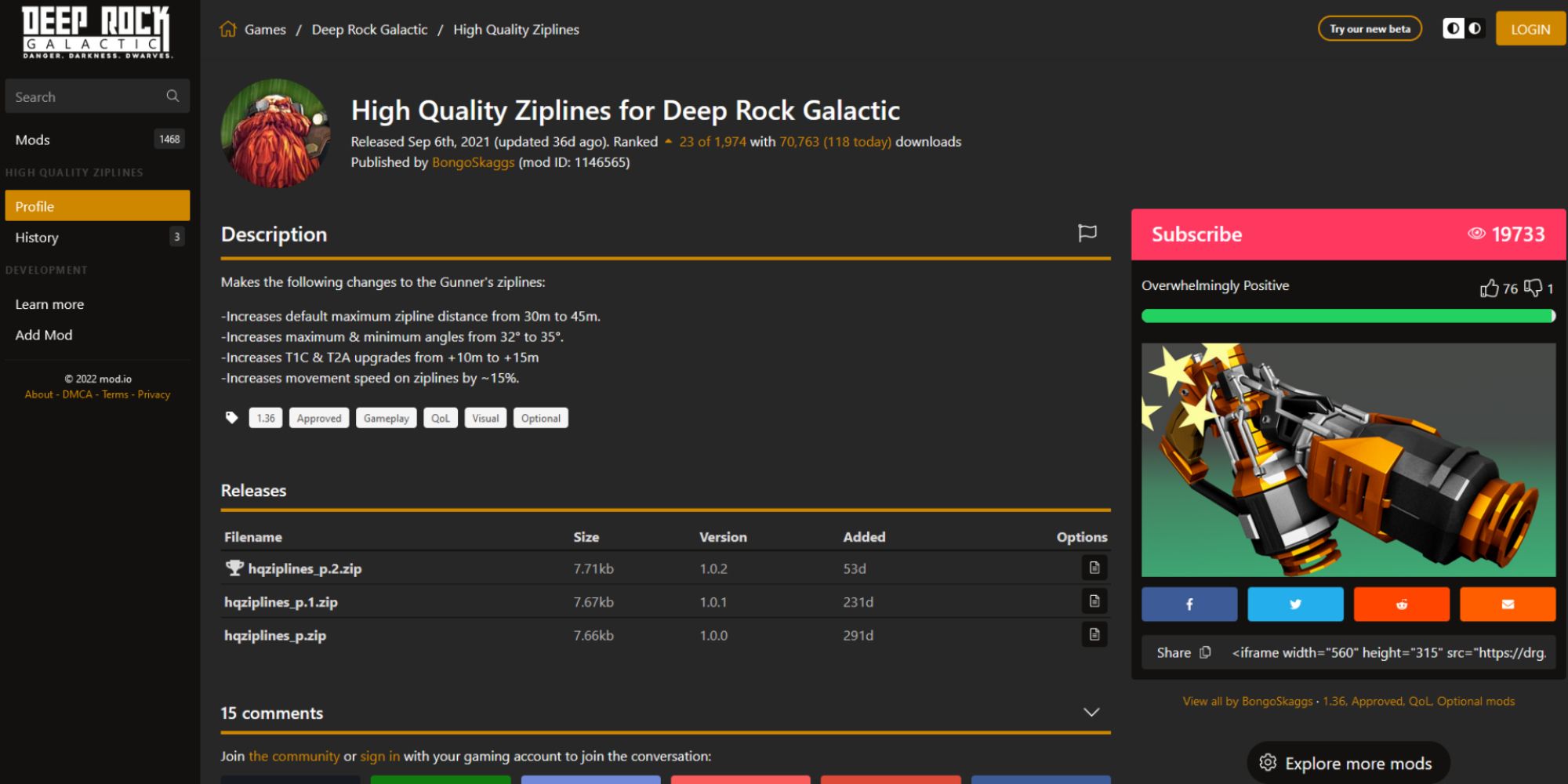 The Gunner has a Zipline Launcher as one of his support tools. It's useful for securing a large cavern when taking on a dreadnought, but otherwise, Scout's handy Grappling Hook is once again better.

This mod makes the Gunner's okay-support tool much more viable. It increases the maximum distance and angles at which you can latch the zipline, giving it more range and complex use. High Quality Ziplines also increases the movement speed when riding the zipline, as we know the speed is one of this support tool's greater weaknesses. 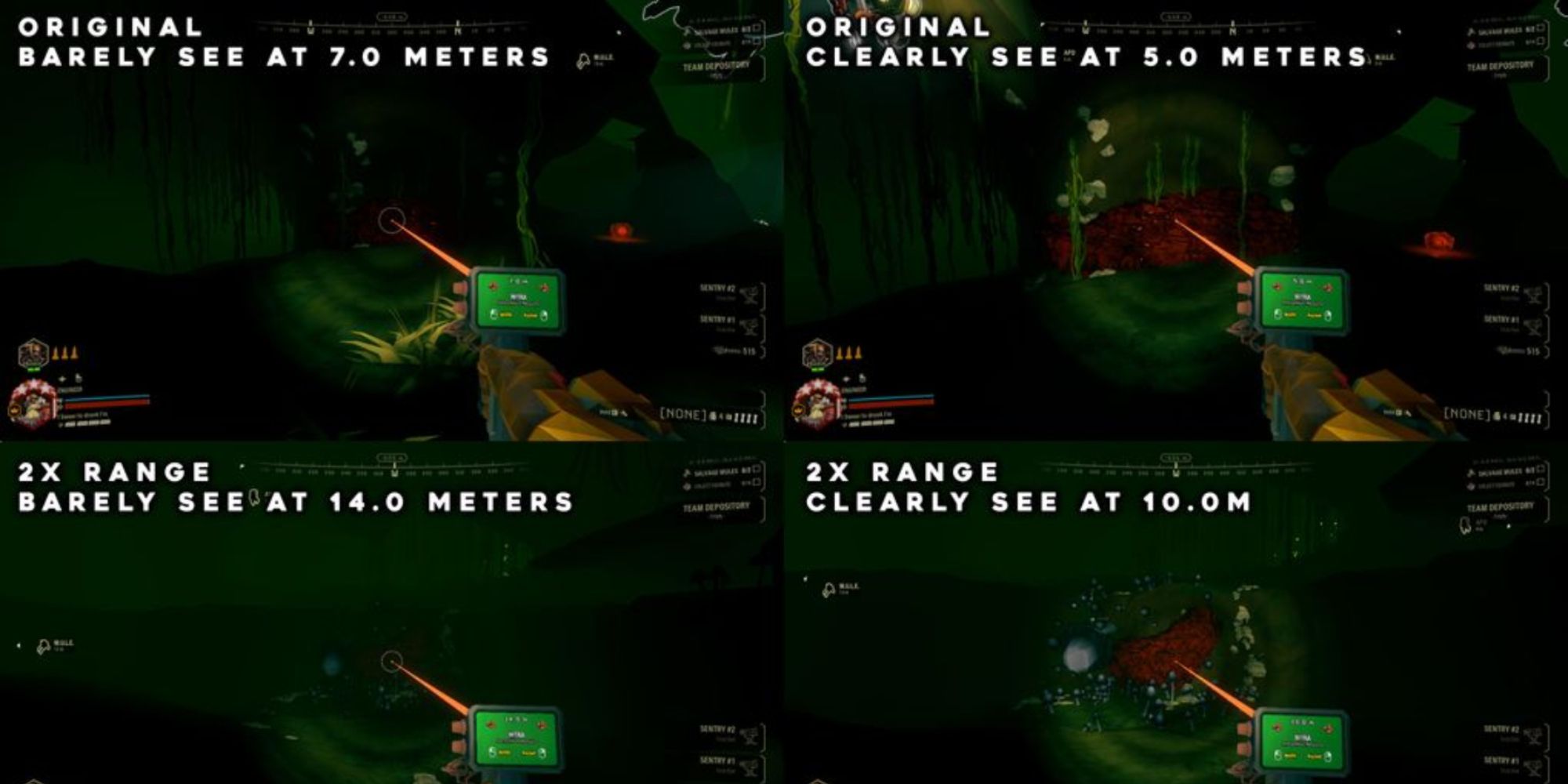 Just like the off-hand flares barely help with the darkness, so does the headlight you can toggle on and off with F. Turning it off barely makes a difference. However, 5x Flashlight Range makes it so that you can really see ore and anything else for that matter at much greater distances due to the flashlight.

The user has created different pages for each type of flashlight range, from 2x to 5x range. The photo above showcases the difference. 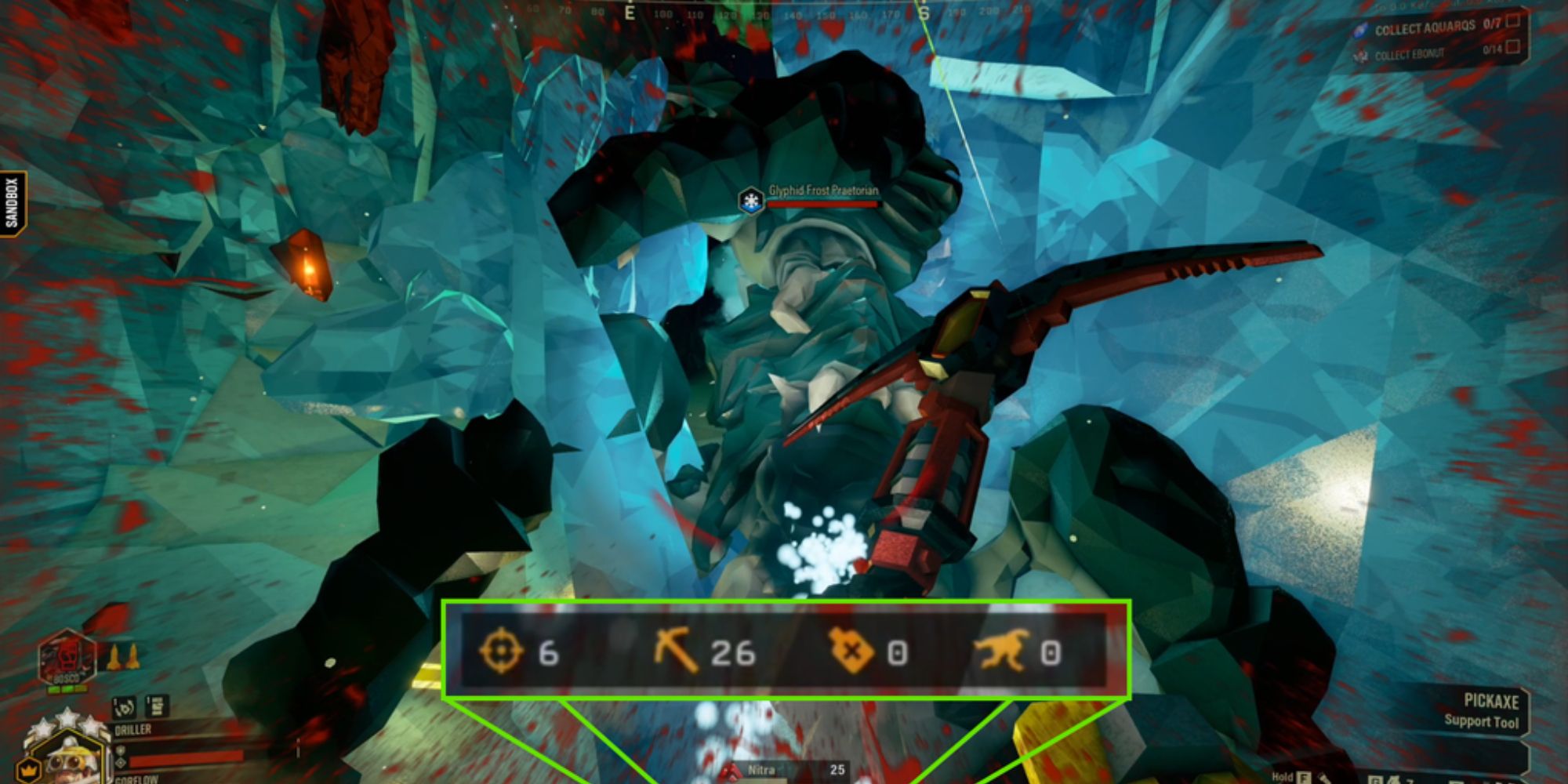 This is a small quality of life addition to the game. At the end of each mission, you get to see everyone's mining and fighting progress throughout the said mission. Who mined the most, who revived the most, and so on.

With this mod, you're able to see your own stats in real-time while doing missions. This is more of a satisfying table that can allow you to see how well you're doing. 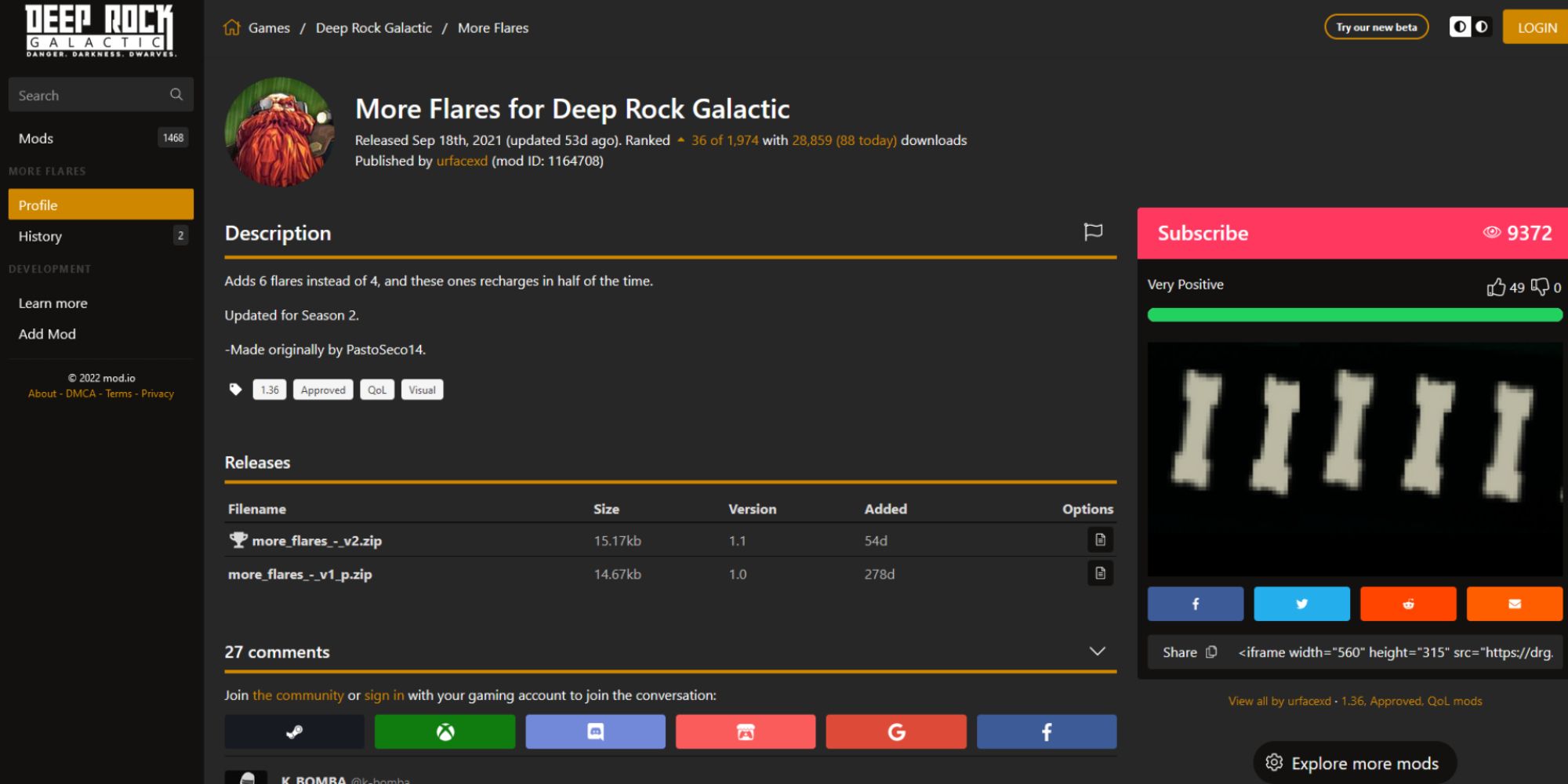 More Flares does what it says. Every dwarf has only four flares that take forever to recharge. This is quite difficult when you're traversing large caverns underground. This mod adds six flares for every dwarf and makes them charge even faster.

This is yet another mod that makes it so you don't have to Scout all the time. 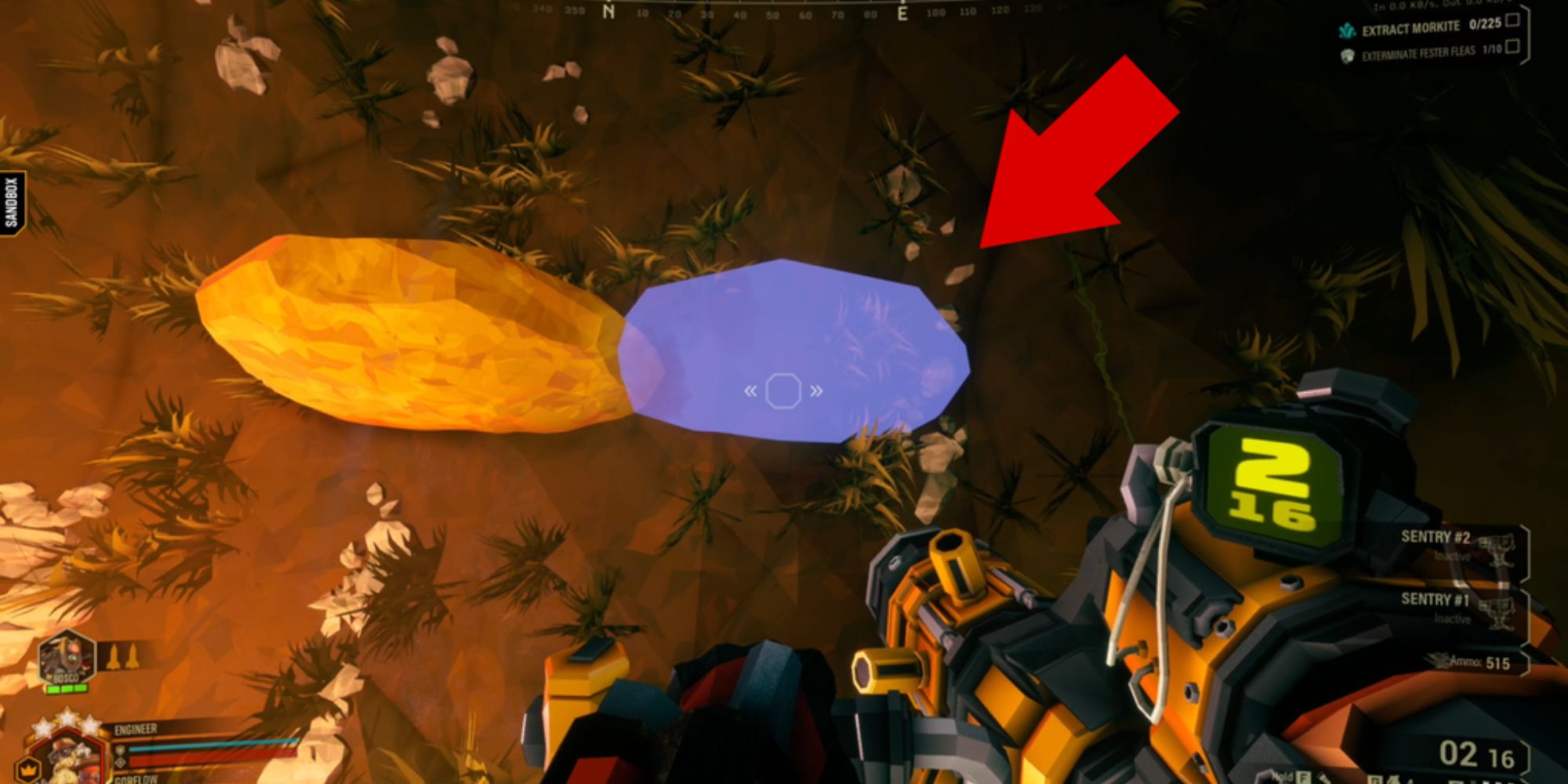 The Platform Placement Preview By Gorflow

This has to be one of the most useful and exciting mods that add value to the game. The Engineer's support tool, Platform Gun, is highly useful. Especially when paired with a Scout. From afar, it can be hard to understand where you're aiming and where the platform is going to land. It takes time and calculations if you're not close to the wall in question.

The Platform Placement Preview lets you do just that. You will get a blue preview of how the platforms going to look and where it's going to be angled and placed, before actually placing them. This allows for more accurate fire, and you will be more helpful to the team. 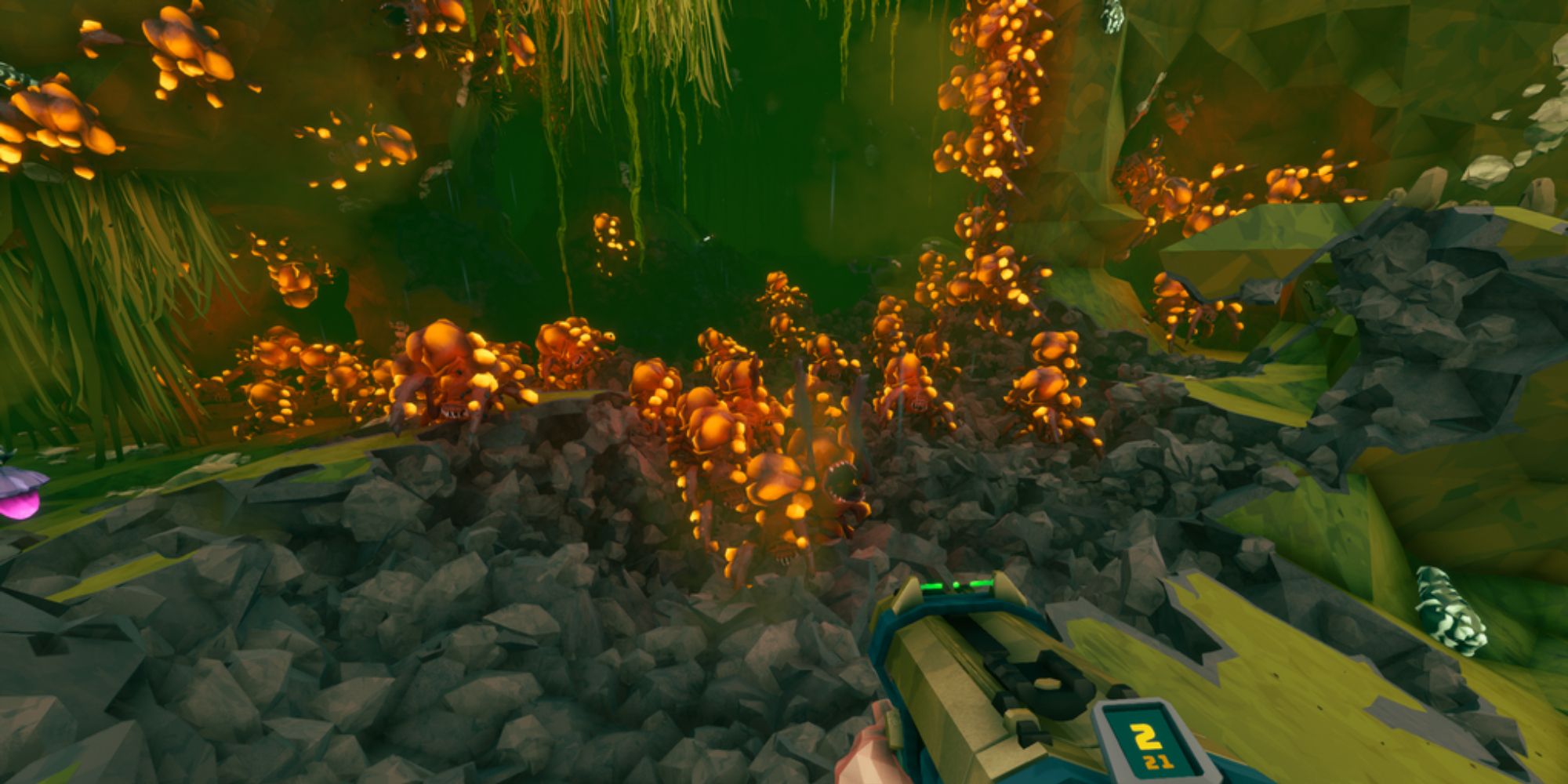 This is a more wacky mod. Spawn Menu gives you the power to spawn whatever you want. It can be more minerals or more enemies.

More enemies make the game more exciting and fun for friends or if you prefer to grind money and ore, you can do that as well. There are over 165 things to spawn. 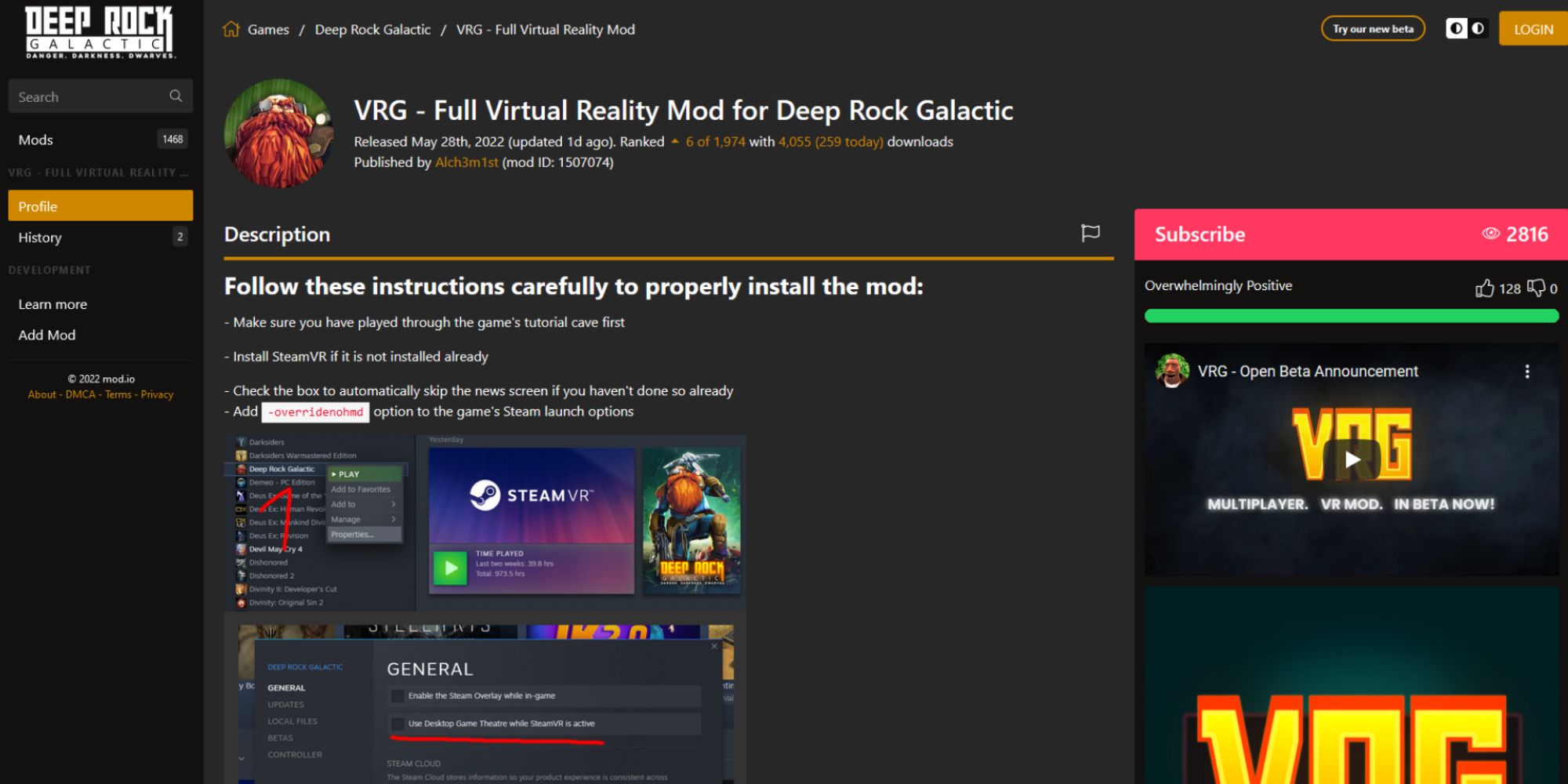 VRG – Full Virtual Reality Mod is a VR mod made by three creators. Probably a hard task to do, these users have tried their best to make Deep Rock Galactic compatible with Virtual Reality.

Of course, the mod is ever-growing and changing so that the experience is more stable and realistic. Deep Rock Galactic isn't a game you'd think of being in VR, but it's an adorable fun time if you look at the preview videos for the mod. 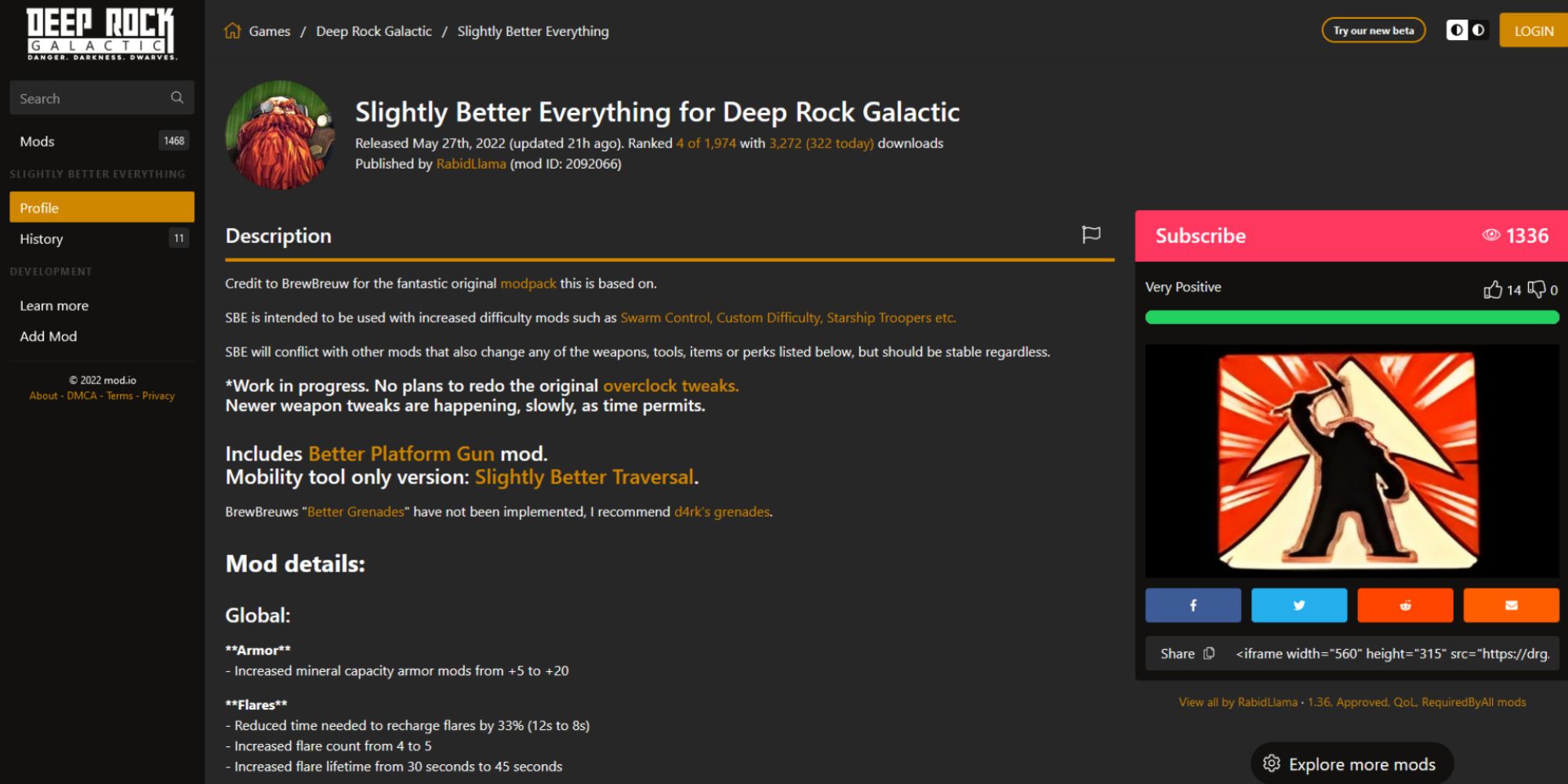 Slightly Better Everything By RabidLlama

This mod enhances and changes multiple things in the game to improve gameplay, depending on what you're after.

In this mod, the mineral capacity mod for armor increases from +5 to +20, which is way more significant and useful. Flares have an increase to five, charge faster, and burn longer. Multiple other features in the game are slightly changed to offer a stronger reward to players.