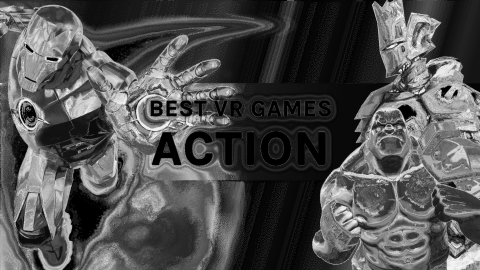 Want to get in on the VR action but need a rest from shooters? Take a look at our list of the best VR action games.

Yes, a lot of VR’s best combat takes place with a gun in-hand, but it’s also true that there are tons of incredible action games that don’t have you aiming down the sights. These aren’t necessarily combo-building button mashers (though we do have a bit of that) but games with fantastic action mechanics sewn into the overall adventure.

To be absolutely clear, our definition of action games here means combat-oriented VR titles that aren’t strictly focused on shooting. We have a list of the best VR shooters right here, but we also wanted a list that focused on action outside of just pulling a trigger, so you’ll see some crossover with FPS titles — along with other genres — but games in which the primary mechanic is firing a gun aren’t applicable. So, no, Half-Life: Alyx isn’t winning this one!

As always, you’ll find these best VR action games on Steam, the Oculus Store and PlayStation Store where applicable.

Somewhere in between all the story-driven sequencing, there is something resembling an action experience in these two big budget Star Wars VR titles. While Vader Immortal’s story earns it a place in our list of best VR movies and experiences, the Lightsaber Dojo is more than worth the price of entry for those wanting a demanding lightsaber game that really delivers on the Jedi dream. Tales From The Galaxy’s Edge also has some great setpieces that Force fans won’t want to miss.

If you’re looking for a traditional action game akin to the original God of War games then Chronos is probably as close as you can get. It’s a full third-person action game in which you tackle a mysterious labyrinth with a sword and shield in hand. Granted it’s not the most compelling exploration of VR’s potential and the combat is closer to Zelda than, say, Devil May Cry, but if you’re looking for a traditional action experience, Chronos is a safe bet.

We’re throwing Moss into this list mainly on the same grounds as Chronos – it’s a lot closer to your traditional third-person action game than most of the other entries on the list. And it’s a great experience, but it also has a heavy emphasis on platforming, meaning combat isn’t quite as big of a focus as other entries on the list. It’s still definitely worth checking out with Moss 2 on the way, though.

There’s going to be a bit of a trend in the second half of this list that might indicate what we feel makes a truly great VR action game. And it starts with Blade And Sorcery, an incredibly complex and thrilling sandbox combat simulator that offers some of the most realistic swordplay you’ll find in VR today. The game is still very much in early access, with huge updates arriving a few times a year. We’d expect Blade And Sorcery to climb the ranks of this list once it’s a ‘finished’ experience, but it’s already one of the best VR action games.

There are some technical troubles that hold this ambitious superhero sim back but, once you get over those, Iron Man VR is an absolutely thrilling action experience. Developer Camouflaj went out of its way to not just make the flying feel natural on PSVR but also deliver a deliberate and meticulous combat system that’s equal parts empowering and demanding. Add that up and you have a PSVR exclusive that’s still worth seeking out today.

You could argue that In Death: Unchained belongs on the shooter list more than it does an action game but we’d argue that process of firing a bow and arrow over and over again is a much more physical experience more akin to melee combat than just pointing a gun and firing. With that in-mind the game earns a comfortable spot in our list of best VR action games thanks to its moreish roguelite gameplay that’s tough to master but incredibly rewarding once you find your flow. If you can, grab Quest’s newer Unchained edition, which is still being updated with new content not available on PSVR and PC VR.

Gorn is a physics funhouse from the developers behind games like Broforce. It’s a slapstick gladiator sim that’s unapologetically gory, allowing you to dismember meatheaded opponents with a huge range of weaponry. Things quickly get messy, with limbs lopped off and eyeballs rolling around, but it’s too comic in nature gor you to ever find it anything more than hilarious. Though it’s ultimately quite comparable to a game like Blade And Sorcery (and many may prefer the latter’s more realistic combat), it’s the fun level structure that slowly introduces you to new weapons that gives Gorn the edge in our list of the best VR action games.

Until You Fall might not have the physics-heavy sandbox fun of a Boneworks or Blade And Sorcery, but we’d argue that its arcade-driven approach to VR sword fighting is just as compelling, and makes for a much more cohesive game. Another roguelite adventure, this one sees you tackling runs of a dungeon, following on-screen prompts to block incoming attacks and then returning fire with your own series of deadly blows. It takes real skill to master, the progression is perfectly tuned and it’s a pretty demanding workout too. Don’t sleep on Until You Fall, it’s easily one of the best VR action games.

Read More: Until You Fall Review

Boneworks is one of two games on this list that also features in our rundown of the best VR shooters, but it’s outside the gunplay that the game shines brightest. Whether it’s taking an axe to the head of a brainless AI zombie, using the lid of a garbage can to shield yourself from incoming bullets or swinging a robotic headcrab by its legs, the game proves revelatory in the sheer sense of freedom it provides. You’ll never forget the first time you used a crowbar in Boneworks; it shows you exactly how VR moves on from flatscreen gaming.

Again, it’s true that Saints & Sinners has an impressive arsenal of rifles and shotguns, but anyone that’s played it knows that it’s the visceral melee mechanics that really make the experience. Stabbing a zombie’s brains in Saints & Sinners actually feels like you’re doing it and, as unsettling as that may be, it quickly proves to be a gruesome treat. It might not have quite the physical complexity of Boneworks but, for our money, it’s Saints & Sinners’ excellent campaign with multiple engaging elements that really helps it secure its place as the best VR action game.

And that’s our list of the best VR actions games across all platforms. Do you agree with us? Would you make any changes? Let us know in the comments below!