BioShock Infinite’s Intro Is The Only Great Thing About It

BioShock Infinite begins the way all great shooters should: with the player character on a vehicle they cannot control bound for a destination they cannot imagine.

When we first meet Booker DeWitt, he’s in the backseat of a rowboat headed for a lighthouse. This is a kind of intro that narrative shooter fans may recognize. The first Half-Life began with Gordon Freeman on a tram heading into the Black Mesa Research Facility. That game’s DLC Blue Shift started with Barney Calhoun, a Black Mesa security guard, taking the same trip, and Opposing Force, Half-Life's other DLC, opened with a helicopter full of marines choppering into Black Mesa. Half-Life 2 doesn’t fix what isn’t broken, plopping Gordon onto a train headed into the dystopian City 17. Episode 2 even gets meta with it, opening in the wreckage of the train crash that closed Episode 1.

Reading that list out, it might seem samey, repetitive. But Valve has developed some of the best FPS games ever made and practically invented the narrative shooter. So, it’s worth considering why so many of its games begin in the same way. What does it achieve to open a game like this?

In BioShock Infinite, the on-rails intro gives us a moment to get our bearings. Though there is thick fog ahead, we eventually see the lighthouse peeking through it. When we enter, we see a spiral staircase heading up. The first BioShock began with the player, having survived a plane crash, swimming to a lighthouse and boarding a bathysphere to descend to the underwater city of Rapture. Infinite inverts this dynamic. Though the player, again, approaches a lighthouse from the water, here their journey will take them up into the clouds. 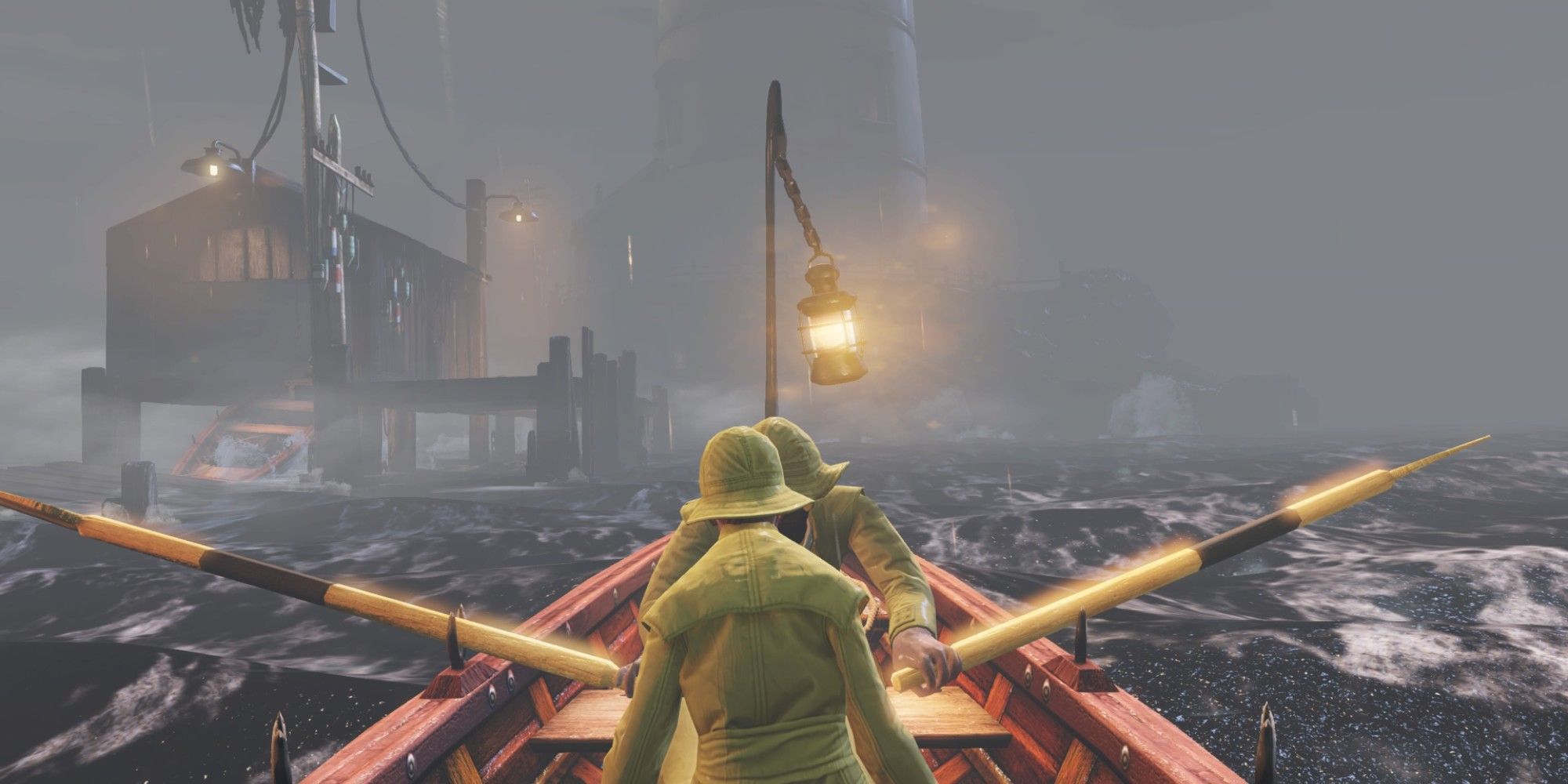 The opening hour is filled with intriguing imagery. As we enter the lighthouse, we see an embroidered sign reading, "Of thy sins shall I wash thee," hung above a basin of water and a stack of hand towels. Up a few floors, a corpse with a bullet-punctured sack over its bloody head, sits posed in a chair, with a cardboard sign stapled to its sweatshirt, reading, "Don't disappoint us." At the top, three bells, each marked with a symbol, must be struck in a particular order to open the door to the mysterious chamber. Inside, there's a chair with arm bindings which you sit in, only for a cage to form around you, rocket boosters to appear beneath you, and liftoff to be achieved.

Then there are the brief glimpses of Columbia we see out the small window of our ramshackle flying capsule. Zeppelins casually floating by. A statue of an angel that towers over the airborne archipelago. A massive portrait of an imposing man with a thick white beard, labeled "Father Comstock, Our Prophet."

Once we exit our flying machine, we are in what looks like a church, but with flooded floors and the mist of clouds rolling along the surface. A man baptizes us, holding us underwater until we lose consciousness, and we wake to see Father Jefferson, Father Washington, and Father Franklin, the holy men of American Christian nationalism reimagined, through marble sculpture, as founding fathers of a new faith. We hear their supplicants pray as we walk through the garden that lays beyond them, prayers to "He who crossed the Delaware with flaming sword and wings of angels" and "paragon of virtue, rebel against ignorance and tyranny." Continued faith in American exceptionalism in the face of constant evidence to the contrary requires a catechism, a rehearsal of the things that we must believe to be true, and BioShock Infinite, in these opening moments, seems to understand that. 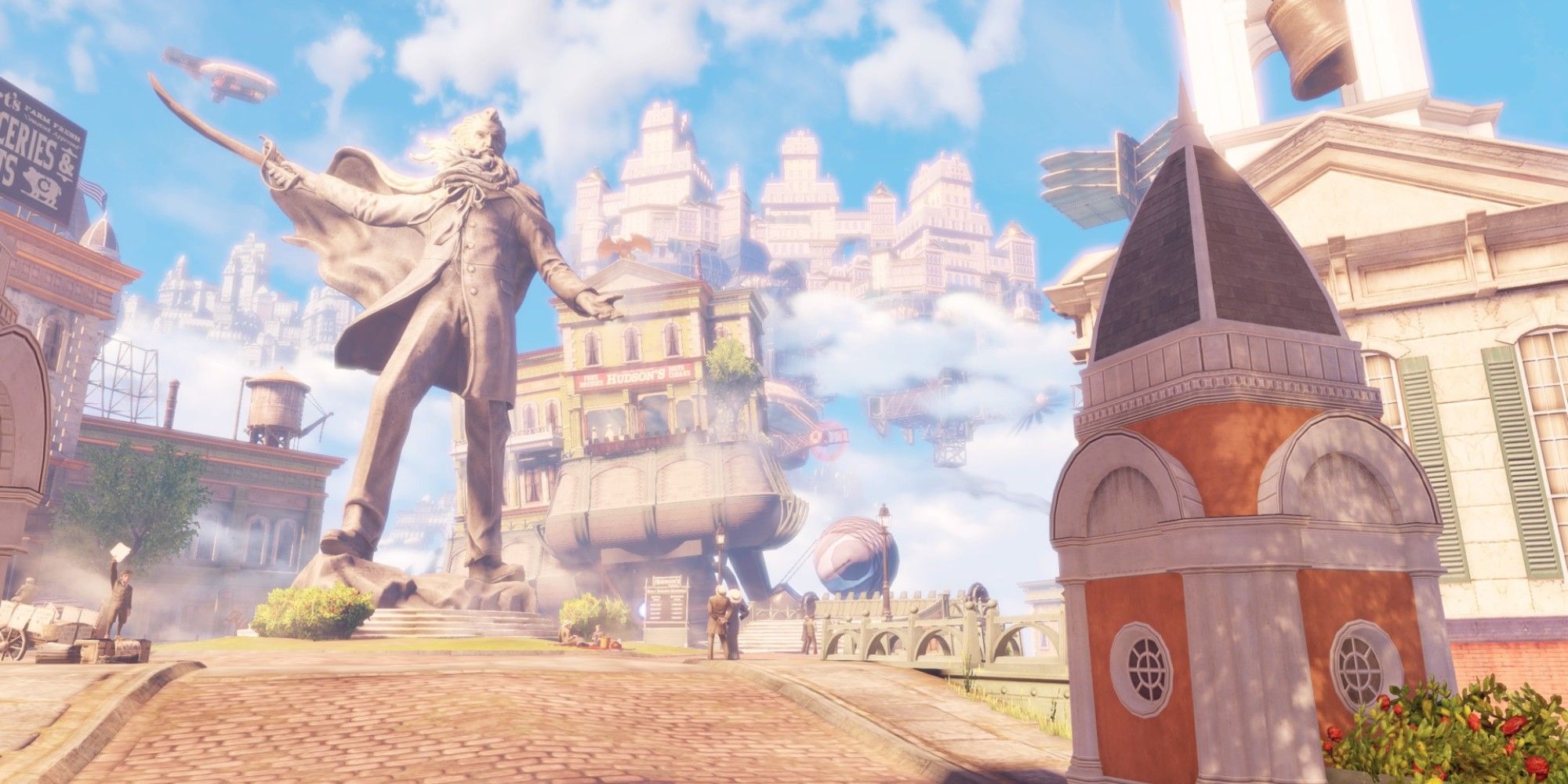 The ways that BioShock Infinite sucks have been well documented. But it’s the strength of this opening hour and the potency of the imagery it’s playing with that make its plummet into both-sides centrism so difficult to watch. The opening hour of Infinite sets up stakes that feel dire, in and of themselves. The game shows us a city in the sky where White supremacy, Christian fundamentalism, and worship of America are inextricably, violently linked. It pushes you to take a side, forcing you to choose between throwing a baseball at an interracial couple or the carnival barker terrorizing them. Then, much later in the game, it has its player character definitively state that there is no difference between the head of the White supremacist state and the Black woman fighting to overturn it. The game retroactively seems to condemn us for wanting to throw the baseball at that racist huckster's head. Infinite presents the full scale of the problem — complete with striking and often loaded imagery — then concludes that anyone who would take the threat it presents seriously is just as bad as the threat itself.

But, in the opening hour, as the game shows us embroidered messages urging repentance as “Old Time Religion” plays tinnily on the radio, as it shows us a beautiful city in the clouds, as we are towered over by Benjamin Franklin and George Washington styled as Greek gods, as a barbershop quartet sings a gorgeous rendition of “God Only Knows” it evokes something superficially beautiful, but rotten to its core.