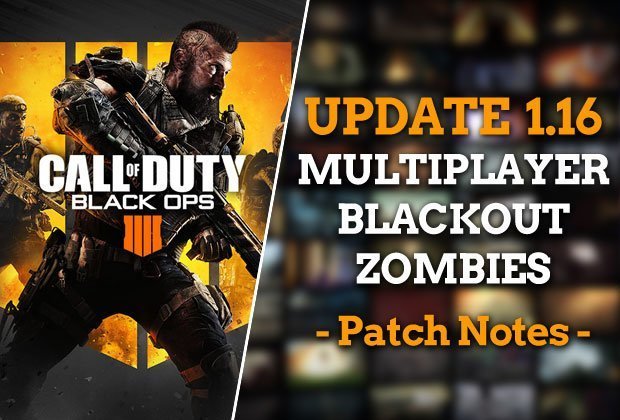 Call of Duty Black Ops 4 developer Treyarch has released the latest update for the game on PS4.

Currently, we know that the new update is version 1.16 and weighs in at roughly 11.8GB on PS4. There is no Xbox One or PC update for the time being but that will roll out eventually.

The patch will bring a variety of changes to Blackout, Zombies and Multiplayer modes.

But more specifically we know that it will introduce the new Ancient Evil Zombies map as well as bringing a close to the Shamrock & Awe event throughout Call of Duty: Black Ops 4.

Stay tuned for the official patch notes which will be dropping any minute.

In the meantime, however, you can read a quick recap of what Treyarch has said about Barebones –  a new MP mode also coming to the game today – which you’ll find just below the new Zombies trailer.

According to Call of Duty experts at Charlie Intel, the mode is designed to “hearken back to the multiplayer of Black Ops 2 and bring that ‘classic feel’ to Call of Duty.”

Initially, Barebones will have Team Deathmatch and Domination modes in the rotation to begin with.

But in time there will also be a Barebones Hardcore Moshpit as well.