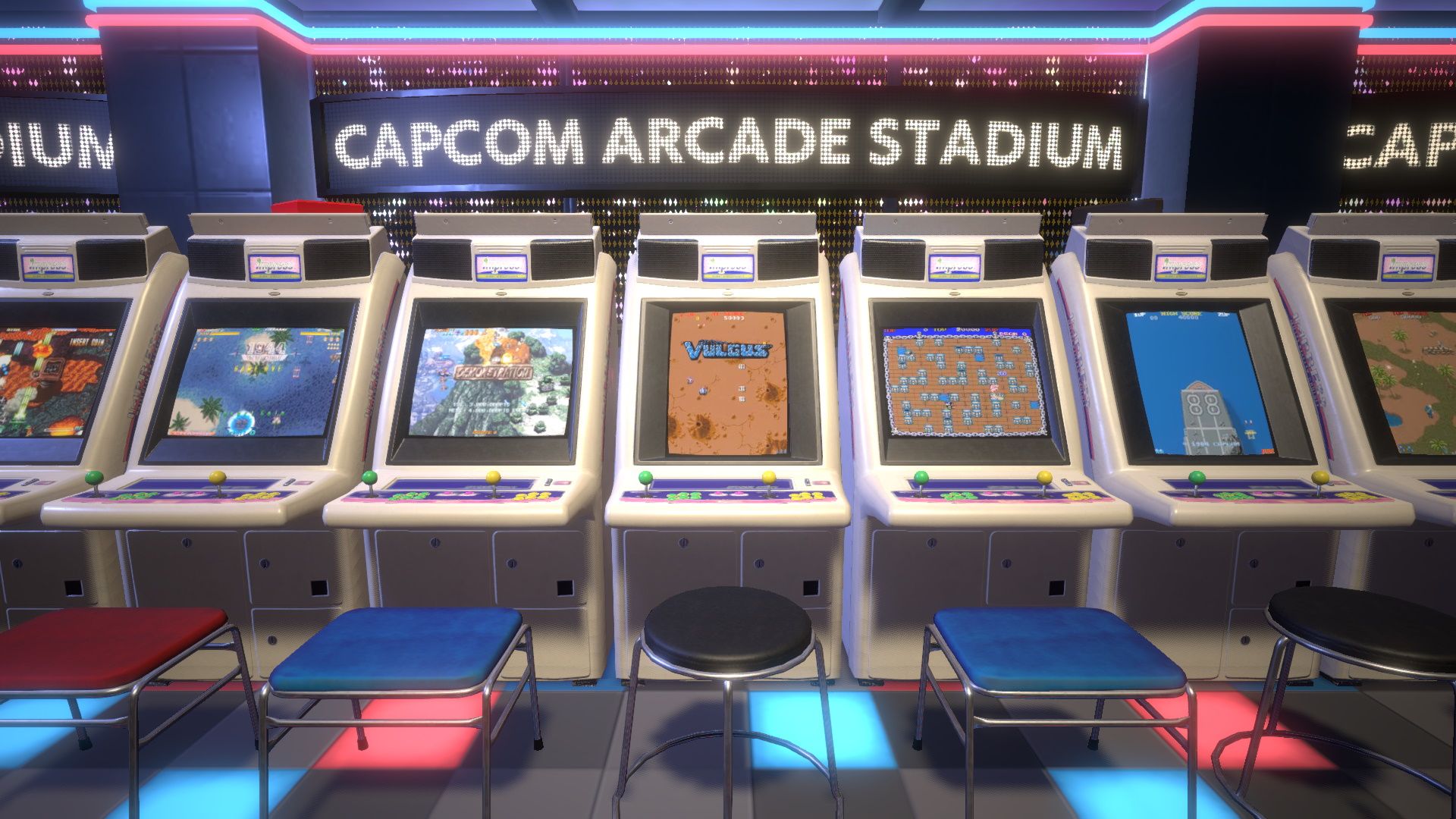 Some of the most famous coin-ops of all-time, from Ghosts ‘N Goblins to Street Fighter 2, are resurrected for this superior arcade experience.

If this was any other generation then right about now we’d be drowning in next gen versions of last gen games that you’d be expected to pay full price for, even if you owned the originals. Up until now that’s just the way it’s always worked and it’s only the increased importance placed on backwards compatibility that’s made the practice politically untenable. Which creates a big problem for companies who like to re-sell you the same old retro games every generation.

From Capcom Generations to the Capcom Classics Collection and Capcom Arcade Cabinet, and a variety of more specialised collections based on specific franchises or genres, Capcom has been mining the legacy of their classic arcade games for decades. And with good reason too, as they have arguably the best portfolio of arcade games in the industry. If that’s something you already know and agree with the chances are you already own one of the aforementioned collections, which makes the prospect of buying into another one a difficult proposition.

Given the sheer size of Capcom’s back catalogue not every game appears in every collection, but Capcom Arcade Stadium has a particularly large selection of over 30 titles. The presentation of the games is excellent too and they all come with two important new features, an instant rewind and a slowdown button, that makes this one of the best ways to play classic arcade games on an ordinary console.

There are several issues at work here, in determining whether Capcom Arcade Stadium is something for you, which are made easier to gauge by the fact that it’s technically free to play. Or rather the front end is, plus one free game: vertically scrolling shooter 1943. Ghosts ‘N Goblins is also free at the moment, presumably as a means to promote the upcoming Ghosts ‘N Goblins Resurrection, but the other titles are organised into three separate packs that cost £11.99 each and contains 10 games – which works out as just over £1 each. Or exactly £1 if you buy all three packs at once for £29.99.

Ignoring the whole ‘I already bought these games three times before’ problem (which isn’t to suggest it’s not a serious issue) that is actually very good value for money. Your mileage will vary though, so the next thing to consider is the selection, which again depends on your history with the games and how upset you are that your personal favourite is not included.

Whether Capcom intends to release additional packs, beyond the initial three, probably depends on how well this first trio does but they’re organised into distinct time periods: 1984 to 1988, 1989 to 1992, and 1992 to 2001. The first one includes Vulgus, Capcom’s first ever game: a Xevious clone that remains surprisingly playable today and which sets a good tone for the rest of the collection.

Action puzzler Pirate Ship Higemaru and vertically scrolling shooters 1942, Commando, and Legendary Wings are similarly ancient in terms of technology but also hold up remarkably well, with 1942 and Commando being important legacy games for Capcom. The likes of Tatakai No Banka (aka Trojan, we’re not sure why there’s only a Japanese ROM), Section Z, and Forgotten Worlds are much less well known but also usually have some historical significance, such as the latter being the first to use the CP System arcade board.

You also get Bionic Commando, which we keep wishing had more of a legacy as it’s one of the few games were the console versions are better than the arcade and the idea of having an extendable bionic arm has so much potential. Rounding out the ‘Dawn of the Arcade’ pack is Ghouls ‘N Ghosts which, together with its predecessor, is still as viciously difficult as always.

But there the Capcom Arcade Stadium can actually help, as a quick press of the right trigger will see the game automatically rewind back through the last few seconds of gameplay so that you can finally get further than the second level and listen to the whole of the game’s gorgeous soundtrack.

Having the rewind button so easily accessible is a literal game changer, especially when combined with the left trigger which controls the speed and can slow it down enough so that you can see every enemy coming a mile off (or speed the action up, for reasons that are harder to discern – perhaps to give Street Fighter an extra turbo boost).

You also have infinite credits if you want them, and the usual save states you get for most retro games nowadays, but Capcom Arcade Stadium’s options go that extra mile and present the games as something anyone can beat, rather than inert museum pieces that you play for a couple of goes and then give up on in disgust.

The Arcade Revolution pack covers Capcom’s golden era with stone cold classics like Strider, Final Fight, and the original version of Street Fighter 2. Many in Europe will probably know these games more from their home conversions, unless they had a particularly well-stocked arcade at the time, including scrolling beat ‘em-ups Captain Commando and Dynasty Wars (which is a lot like Koei’s Dynasty Warriors in spirit and setting), as well as 2D shooters Varth, Carrier Air Wing, 1941, and Senjo No Okami 2 (aka Mercs).

Strider is another one that greatly benefits from the rewind button, allowing you to appreciate a game that is far more complex than normal for an arcade title and showed Capcom’s coin-op creators at their most imaginative and ambitious. The same could be said for the much less well-known Mega Twins, which is a Monster World style action platformer with a proper story and upgradeable equipment.

By the start of the millennium the heyday of the arcades was over but the final Arcade Evolution pack does include two new iterations of Street Fighter 2. Cyberbots is the only other fighting game though, so there’s no Darkstalkers or Rival Schools, and instead a surfeit of scrolling beat ‘em-ups including Battle Circuit, Dynasty Wars sequel Warriors Of Fate, and Powered Gear (aka Armored Warriors). Then to finish off there’s four 2D shooters, in the form of 19XX, 1944, Giga Wing, and the superb Progear.

With only 31 games there are inevitably a legion of omissions here, with no licensed games at all, despite the likes of Dungeons & Dragons and Alien Vs. Predator having been re-released before. The absence of U.N. Squadron and Knights Of The Round is more surprising, and we would’ve killed to see Power Stone, but overall it’s a solid selection if you accept the lack of licensed titles.

Surprisingly, Capcom seems to have done the emulation themselves, rather than use a specialist like M2, but everything plays exactly the way it used to, including slowdown where it always used to be. There’s also a wide range of different filters and screen displays to get the games looking as much like they did back in the day. And since this is a Switch exclusive you can even play the games vertically in tate mode, for which we again recommend the excellent Flip Grip peripheral.

However, the display options can’t compensate for the fact that all the games originally used joysticks, which is why Capcom Home Arcade was such a tempting prospect, despite its huge cost. Although some games, such as Forgotten Worlds, had specialist controls that don’t translate well to any standard set-up.

The one unavoidable problem is that there’s not really any museum content for the games, just an on-screen manual. Capcom has released production artwork, flyers, and cabinet artwork before, for previous collections, and it’s disappointing not to see it here. It’s surprising too, because in most other aspects they’ve pushed the boat out with an online leaderboard system for every game, challenge modes, and a levelling up system to unlock new game borders and the like (perhaps including artwork too, although we’ve not seen any yet).

Apart from the museum features Capcom Arcade Stadium is a near perfect virtual arcade and one we’d love to see filled out with Capcom’s other games – and those of others. Regardless of the nostalgia factor, the rewind and slow-mo options make these versions uniquely accessible to new players and that’s an important achievement that should help to keep these classic arcade games alive for another generation.

In Short: One of the best coin-op collections ever produced, not just in terms of the games included but the excellent presentation and range of options.

Pros: Solid selection of games that don’t all have to be bought in one go. Rewind and slow-mo options are a godsend for completing some games. Online leaderboards and unlockables are very welcome.

Cons: You probably own a lot of these games already on older formats. Lack of museum content is a shame, as is the absence of any licensed games.