While Capcom is known for its fighting games, the company is responsible for an arcade puzzle classic that still gets played to this day. Super Puzzle Fighter 2 Turbo features Capcom's various fighting game characters in battles that seamlessly combine puzzle game and fighting mechanics. So, while it's not technically a fighting game, its inclusion in Capcom Fighting Collection is well-deserved.

Puzzle Fighter's gameplay is both straightforward and remarkably complex. In short, you build gems of the same color, then destroy them and send counter gems to your opponent's side. The first person whose gems reach the top gets KO'd. Still, understanding the nuances of this title will help you develop strategies that parallel the tense mind games of a 2D fighter.

Mix Up Normal And Super Attacks To Pressure Your Opponent 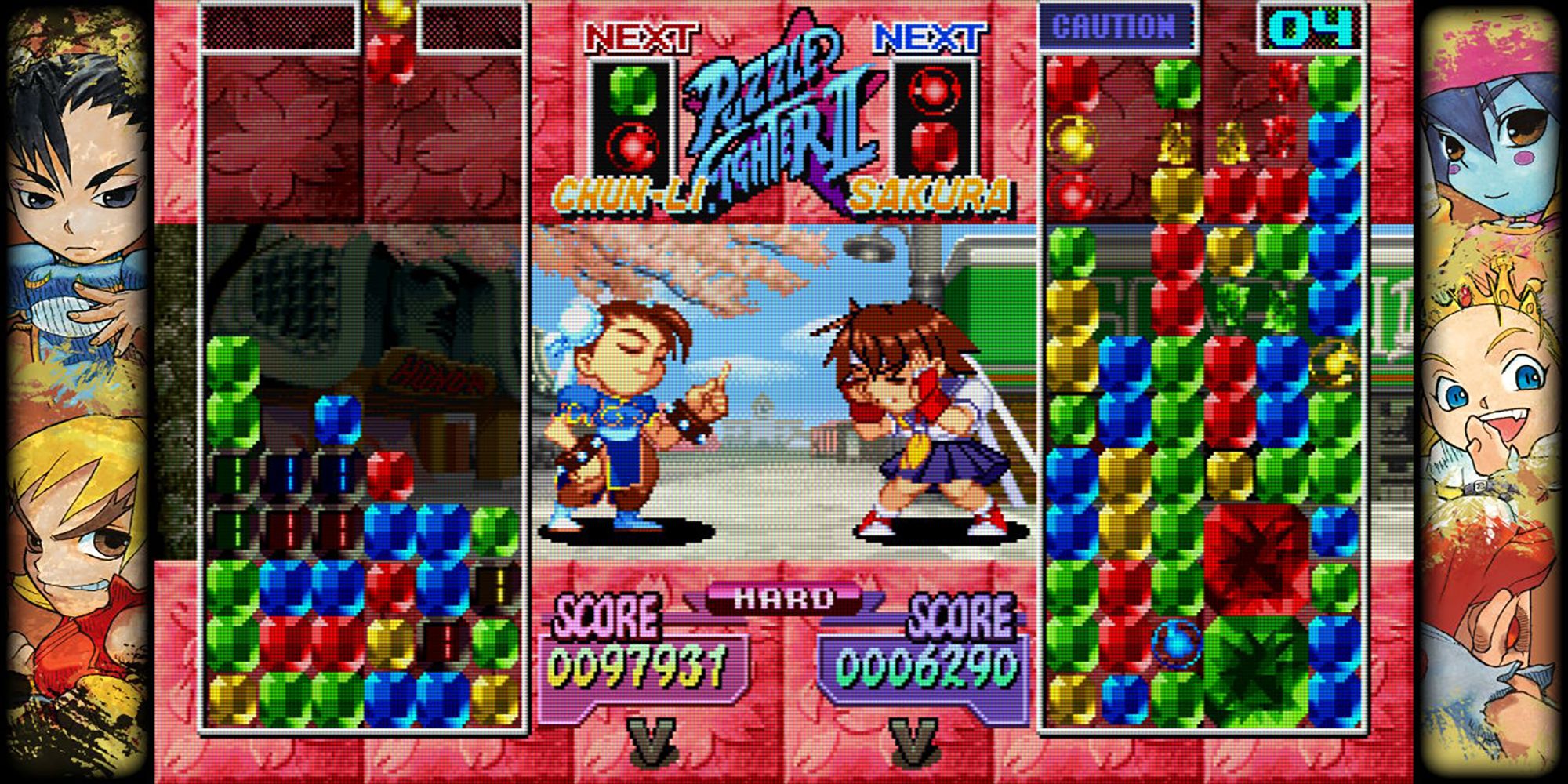 So, how do attacks work in Puzzle Fighter? First, you must build power gems by placing gems of the same color next to each other in a rectangular arrangement. Then, when you wish to send an attack to your opponent, you can destroy the power gem with a crash gem of the same color—the bigger the power gem, the more potent the attack.

Without getting too technical, there are three levels of attacks indicated by the counter-gem drop warning in your opponent's gem field.

Connecting crash gems to any gem of the same color, whether they are rectangular power gems or linked normal gems, will cause an attack. However, crashing power gems grants a more substantial possibility of landing specials and supers.

So, in theory, it would behoove you to create an enormous power gem and destroy it, sending enough counter gems to fill the rest of your opponent's gem field. However, this strategy looks much better on paper than it applies in the game.

Consider playing your average versus fighter. For example, if your primary focus were on super combos rather than hit-confirming with light attacks, stringing combos together, countering, etc., you would have few tools at your disposal. Mixing weak and strong attacks in fighting games is crucial to land more damage. The same rings true for Pocket Fighter.

Weak attacks have plenty of benefits. For instance, you can use weak attacks to clean up your gem field or block off an opponent's power gem from getting larger. However, too many weak attacks in succession could fill your opponent's gem field with counter gems of the same color. Once these gems convert to normal, they'll form powerful power gems for your opponent to crash.

Strong attacks benefit from sending waves of counter gems at your opponent. However, dedicating your gameplay to building one colossal power gem is like putting all your eggs in one basket. This focus can lead to several unorganized trash columns impeding your gem field. And if your opponent gets the chance to send an attack before you crash that oversized gem, you'll be out of luck.

Counter Gems Can Work To Your Advantage 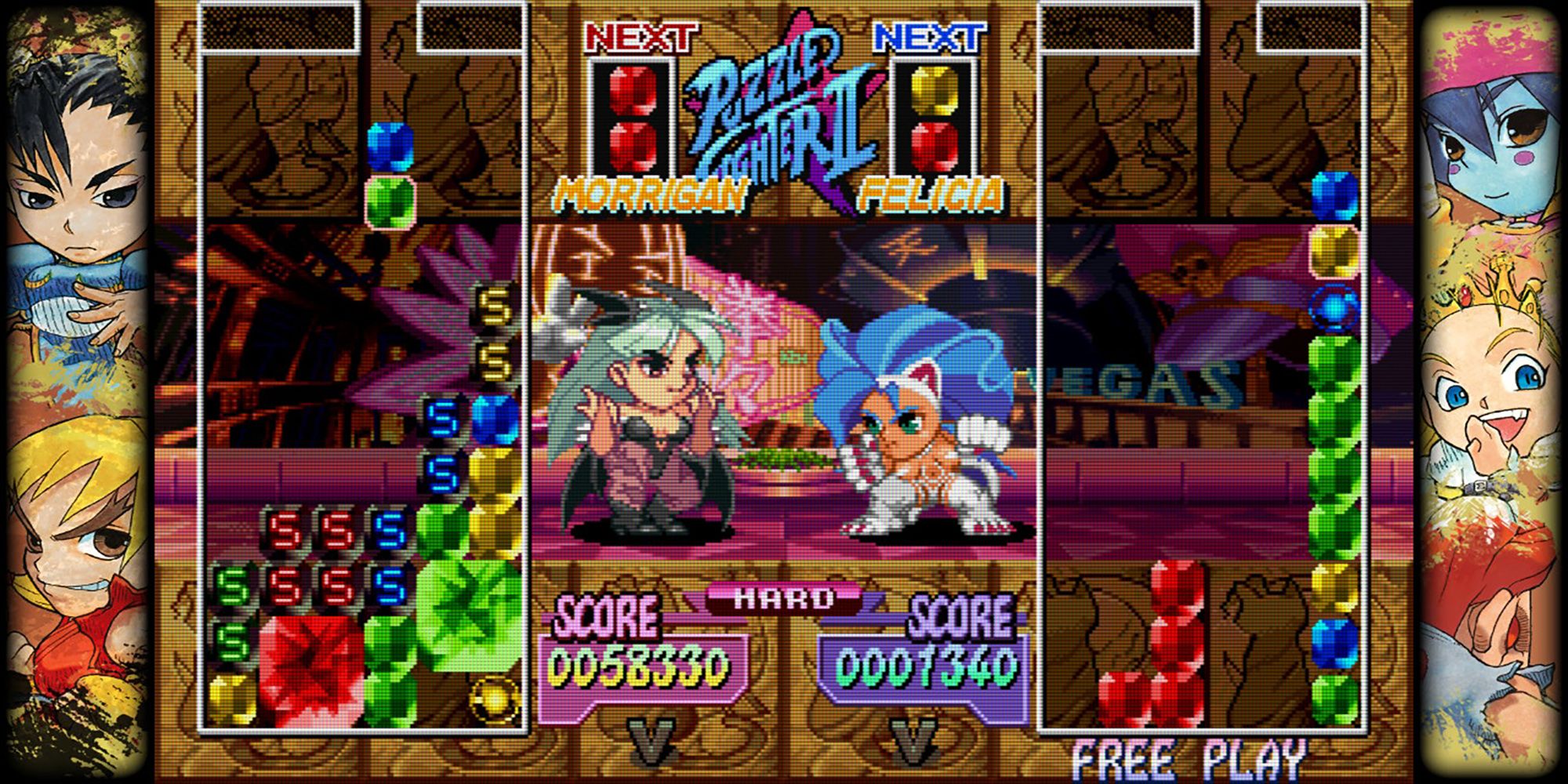 A counter gem drop is scary and exciting simultaneously. On the one hand, too huge of a drop could result in a loss. However, on the other hand, these counter gems could hand you a victory once they become standard gems. Therefore, accommodating your opponent's counter gem pattern is essential.

Before starting a battle, pay attention to your opponent's counter gem pattern. You'll see it directly under their character's portrait. This pattern shows what color counter-gems your opponent will send on your gem field and where. The bottom row of this pattern is especially significant since you can count on most attacks sending these gems your way.

For instance, Ken's bottom row of his counter-gem pattern is all red. Therefore, it makes sense to prioritize developing a red power gem in anticipation of his attacks. Then, as he sends his first few normal attacks your way and red counter gems fall to your gem field, he'll keep building your power gem, doing half the work for you. Finally, when the opportunity comes to crash this red power gem, you can send a powerful super combo in his direction.

Pay Attention To What Your Opponent Is Doing 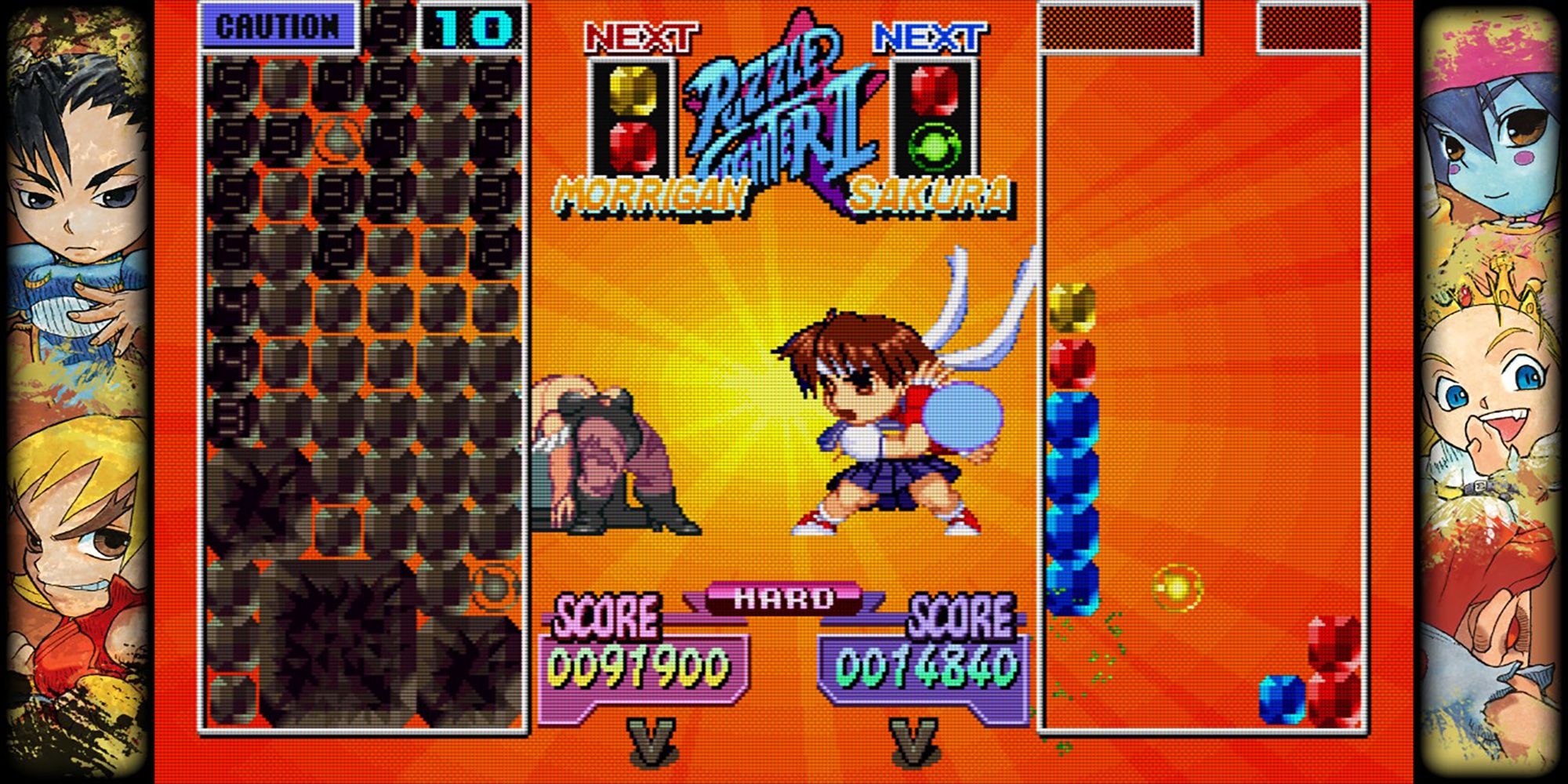 Keeping an eye on your opponent and responding to their actions is vital to any fighting game. The same is true for Puzzle Fighter. Checking on your opponent's gem field will give you cues that determine whether to play offensively or defensively.

For instance, if you notice your opponent crashes a substantial power gem, it makes sense to use whatever crash gems you can to counter their attack and lower their drop count on your screen. Likewise, if you were building a power gem you meant to save for later, you may want to crash it if you can.

However, suppose you check your opponent's gem field and discover they have no substantial power gems to use against you. In this case, you could gain a considerable edge by crashing a large power gem to send a dangerous attack to their field that they can't counter. 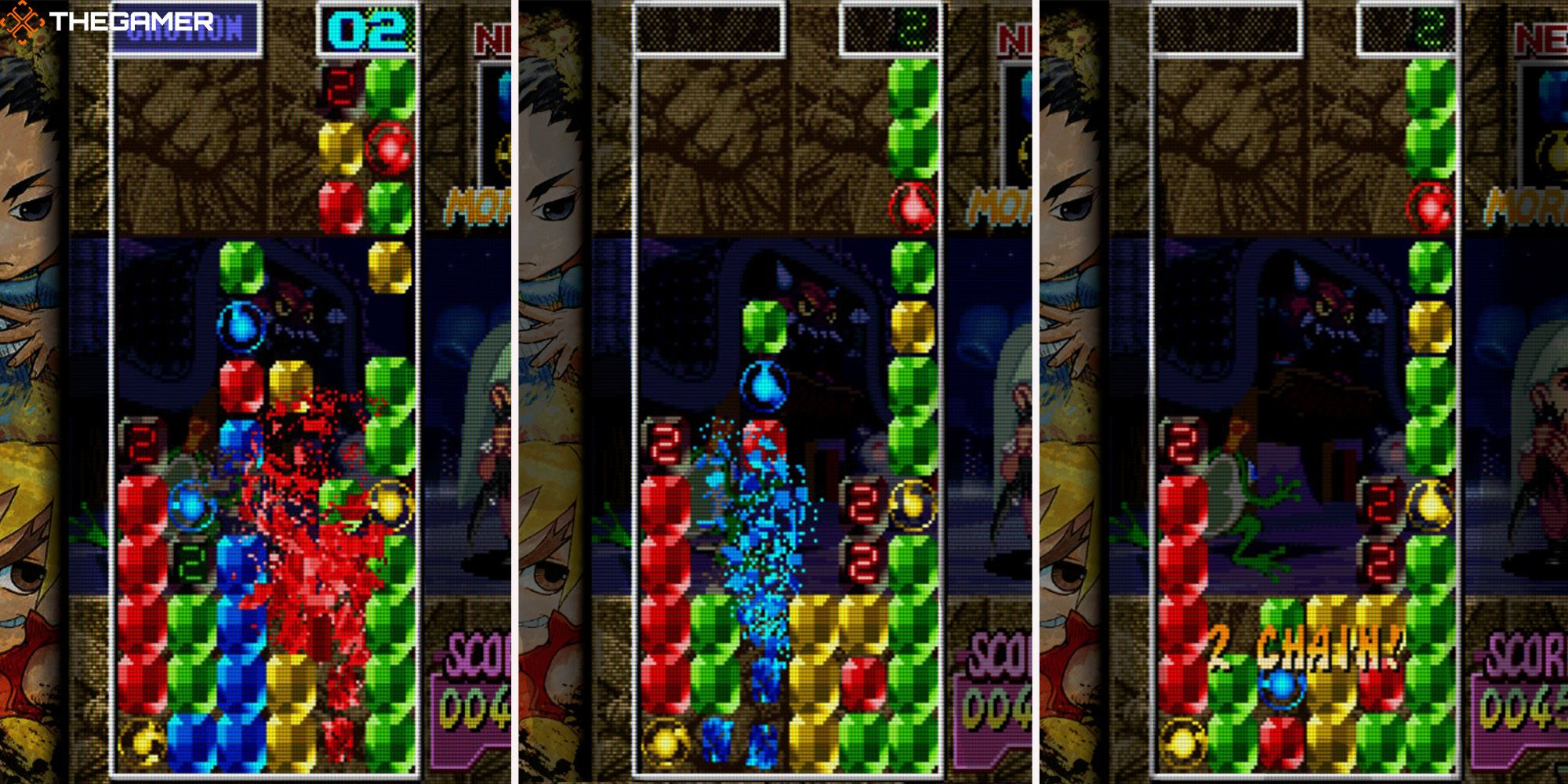 Pocket Fighter does not center around chain reactions like other puzzle games such as Puyo Puyo. However, learning to build chains is an effective way to apply additional damage. Chain reactions are constructive when you need to build an attack with fewer resources.

For instance, if you need to eliminate links of normal gems, you can carefully place crash gems to activate a chain reaction. In turn, you'll earn more counter gems than you would if you destroyed each link individually.

Additionally, crashing multiple power gems in one chain can make a group of small power gems add up to a more impactful attack.

However, building chains is tricky. Therefore, you must be mindful when organizing gems to build a chain. For example, incomplete chain formations can become foiled by a fallen counter gem. Or an adjacent counter gem could transform into a normal gem and prematurely activate a key crash gem to your chain. There are many ways a chain reaction could get interrupted. These possibilities make careful gem placement a necessity. 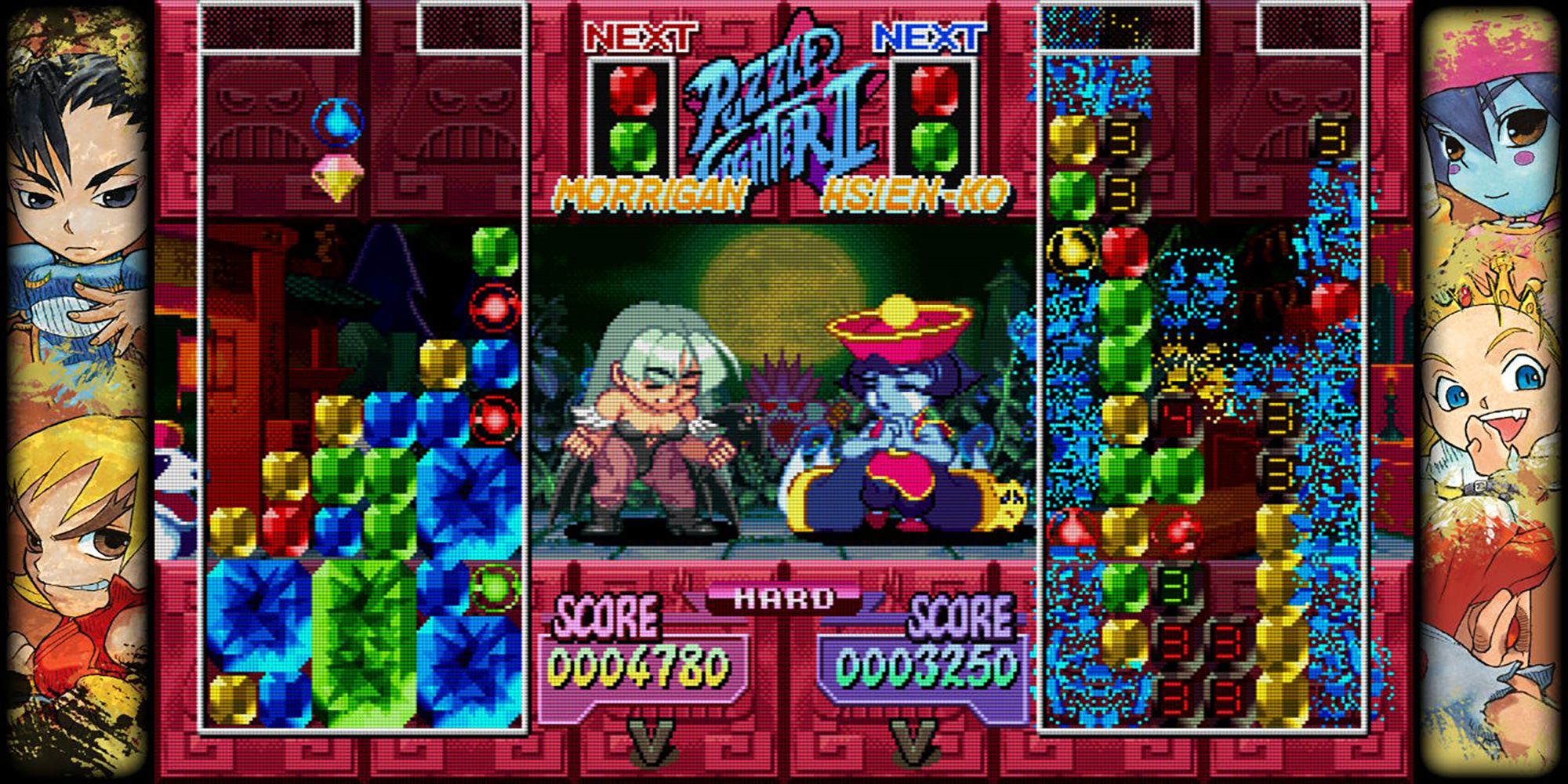 Rainbow gems are like the Hail Mary piece in Puzzle Fighter. These gems are crash gems that will destroy all the gems of the same color as the gem it touches. Therefore, when you need to clear a lot of space on your gem field fast, a rainbow gem will make a significant difference.

However, while convenient, rainbow gems are far less powerful. As a result, gems crashed with a rainbow gem send far fewer crash gems to your opponent's field. For instance, crashing a power gem that generally yields a super combo with a rainbow gem may downgrade it to a special move.

Plus, counter gems sent from rainbow gem attacks have a lower countdown period than attacks without them, three drops as opposed to five.

Therefore, spending a rainbow gem on that massive power gem you've been building is unwise unless it is an emergency. Using rainbow gems to eliminate gems that impede your other power gems is more facilitative.

For instance, suppose you have normal green gems scattered between smaller red power gems. You could use the rainbow gem to eliminate those pesky green gems in this case. Then, the small red power gems can combine and become a more powerful gem.

While gem combinations are determined randomly before each drop, the rainbow gem is predictable. The rainbow gem always appears every twenty-five drops.