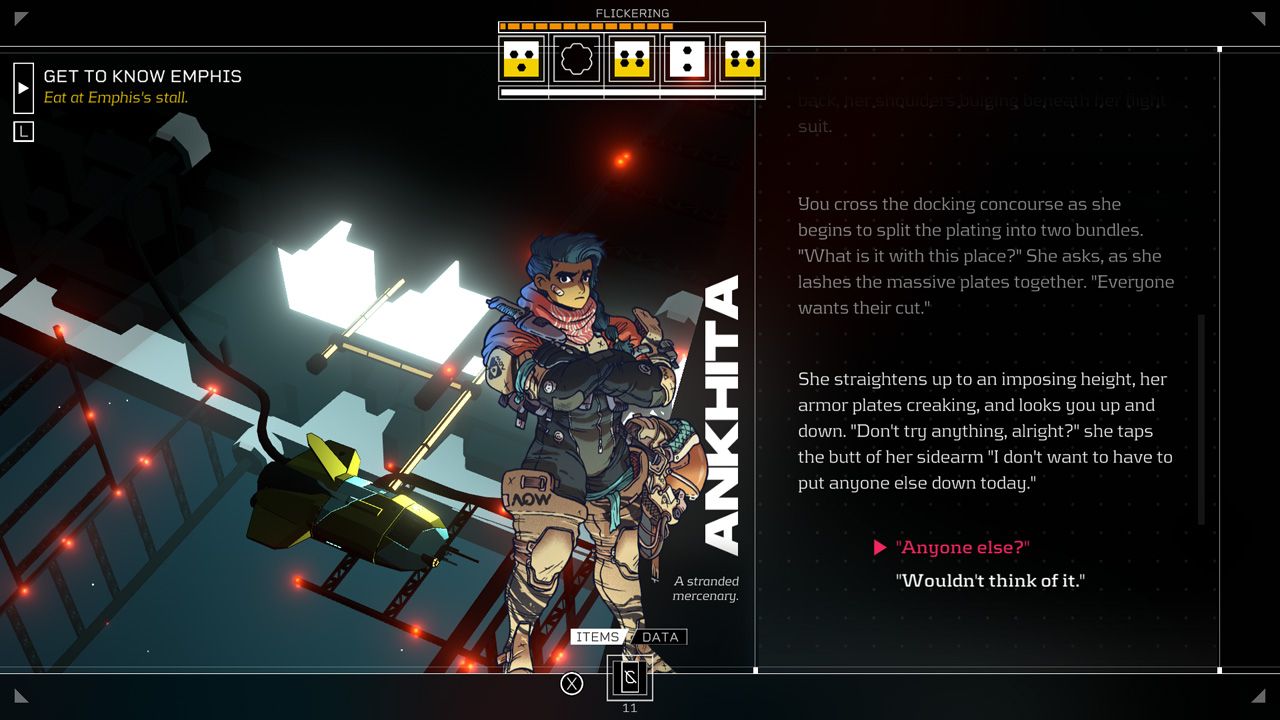 Investigate a delipidated space station at the edge of society in this blend of tabletop role-playing mechanics and a visual novel.

Despite the critical acclaim it received, In Other Waters still feels like an overlooked gem from 2020. In many ways, it was antithetical to the loud, flashy, and violent foundations most games build for themselves – as you turned dials and flicked switches on an AI interface to assist a stranded xenobiologist. It was a sedate experience difficult to sell through screenshots and trailers, told from an unusual backseat perspective that went against the norm by not having the player directly explore an alien planet with swarms of monsters to shoot.

Developer Jump Over The Age, a one-person studio founded by Gareth Damian Martin, might finally make the splash they deserve with follow-up Citizen Sleeper. While it remains faithful in spirit to In Other Waters, with a sprawling interface filled with plenty of widgets to fiddle with, the slick graphic novel artwork, engaging premise, and open-ended design make it far easier to recommend to a wider net of players. If you’re a fan of sci-fi, tabletop role-players, and the thrills of time management this might become one of your favourite games this year.

At first, Citizen Sleep can seem intimidating. You play as a Sleeper, a human consciousness that’s been replicated inside another body owned by corporation Essen-Arp. In a bid to escape their controlling system, you awake in a container on the Erlin’s Eye space station, as you’re caught between trying to survive, by assisting locals with tasks, and trying to flee an incoming hunter who wants to return your body back to the corporation.

Instead of having direct control of your character, the entire experience is played via an overhead view of the space station. Places of interest are simply markers you click onto, while characters are displayed as static artwork beautifully drawn by comic book artist Guillaurme Singelin. A cynic might write it off as a long sequence of menus, which isn’t wrong, but the interface carries just as much of Citizen Sleep’s charm as the excellent writing – in its design, movement, and how satisfying it is to unpack.

At the outset, you’ll likely need a moment to process what you’re supposed to be doing. The tutorials are clumsy, with splash screens throwing out a lot of information which is far simpler than it first appears. Inspired by tabletop games, the crux of the gameplay revolves around a selection of dice you’re handed at the start of each day cycle.

With these, you can interact with different locations – whether working shifts in a scrapyard to earn currency or investing time in helping a character to progress their quest for other rewards, like resources you can trade or upgrade points for your character.

You’re limited by how many actions you can perform in a cycle, which is tied to the amount of dice you have, and a gradually depleting Condition meter you have to recharge by purchasing pricey stimulants. There’s a meta-game with the dice too, with higher numbers giving you a greater chance of performing a chosen task successfully. If luck isn’t on your side or you gamble with a low die, you might be punished with a Condition meter reduction or a payment penalty.

The hook is the layered balancing act of deciding how you spend each cycle on the station. As you meet more characters, you’ll be juggling multiple tasks which might need to be completed within a set amount of cycles, while you maintain your own survival and energy levels. It never gets too stressful, as you choose when a cycle ends by returning to your bedsit container, but there’s a compelling puzzle underneath, of piecing together the most efficient use of your time with the dice and resources you’ve accumulated.

In this sense, Citizen Sleeper is a more meditative and forgiving experience than it initially appears. Instead of heightening urgency by constantly imposing deadlines, the gameplay largely plays second fiddle to soaking in the atmosphere and journeys of the characters. It might be too loose and easy for some, but the sharp writing, world-building, and slick presentation (including a transporting soundscape soundtrack from Amos Roddy) is captivating enough that the less demanding approach feels like a choice designed to spotlight the game’s best qualities.

The narrative is where Citizen Sleeper feels the richest. Anyone familiar with cyberpunk won’t be surprised by its critiques of capitalism and dissections of freedom, but it’s a well executed spin on familiar themes. The characters are the highlight, with each possessing an arc that’s either unexpected or surprisingly moving. Your decisions during the text cut scenes affect how each story plays out, so repeat runs feel necessary to see the complete picture. It’s even possible to miss entire storylines depending on how thoroughly you explore the station.

In some respects, Citizen Sleeper could have better incentivised return visits. At the start, you select one of three character classes – with each possessing different starting stats which boost your effectiveness on certain types of tasks. The differences are so minimal and easily altered, however, it feels like a superfluous decision which didn’t need to exist. The upgrade tree also feels half-baked, with some perks, like a permanent reduction in the price of all items, far outweighing the rest in terms of usefulness.

These minor gripes don’t detract from what’s a fascinating, sharply written, and oddly compulsive gaming experience. Like In Other Waters, Citizen Sleeper’s rhythm might not click with everybody, but for those it does this is one of the most imaginative, refreshing, and engrossing narrative games in a very long time.

In Short: An absorbing mix of tabletop inspirations and sci-fi storytelling, that makes for one of the most unique and well-written games of the year.

Pros: Excellent writing and a memorable cast of characters. Addictive gameplay loop. Slick presentation, from the music to the interface, which sucks you into its world.