Collective launches to be the ultimate ‘back office’ platform for freelancers

The U.S. freelancing economy is booming, according to a recent Upwork report, with more than a third of the American workforce carrying out some form of freelance work in the past 12 months. This reportedly created $1.2 trillion of economic value — 22% up on the previous year.

While a number of factors may have contributed to this surge, including the COVID-19 crisis which has left many people out of work, this movement creates a lot of administrative work in terms of incorporating a new business, doing accounts, expenses, taxes, and all the rest. And this is why a new startup is launching out of stealth today backed by an impressive roster of investors to serve as an all-in-one back office for “businesses of one.”

Founded in 2018 originally as Hyke, the San Francisco-based company later changed its name to Collective and brought on Hooman Radfar as a cofounder and CEO. Radfar previously launched a website audience tracking platform called AddThis, acquired by Oracle in 2016 for a reported $175 million, and he subsequently joined startup lab and investment company Expa, which was set up by Uber cofounder Garrett Camp.

To help fund its platform through its beta stage and onto its public launch, Collective has managed to raise $8.65 million in funding from backers including General Catalyst, QED Investors, Google’s AI-focused fund Gradient Ventures, Expa, and a host of notable individual investors including Garrett Camp.

The Collective platform offers an array of tools and services through a single online dashboard, covering S Corp formation, business banking, accounting, expenses categorization, tax filing guidance and advice, and more. The platform also links in directly to third-party financial software such as Gusto and QuickBooks.

Arguably, the platform’s greatest asset is its instant access to professional tax and business advisers, with Collective serving its users with a quarterly review of their accounts and books to provide feedback on ways to adjust salary and “optimize” deductions and expenses.

Members can also access real-time messaging so they can contact their designated bookkeeper or advisor with any specific questions they have. 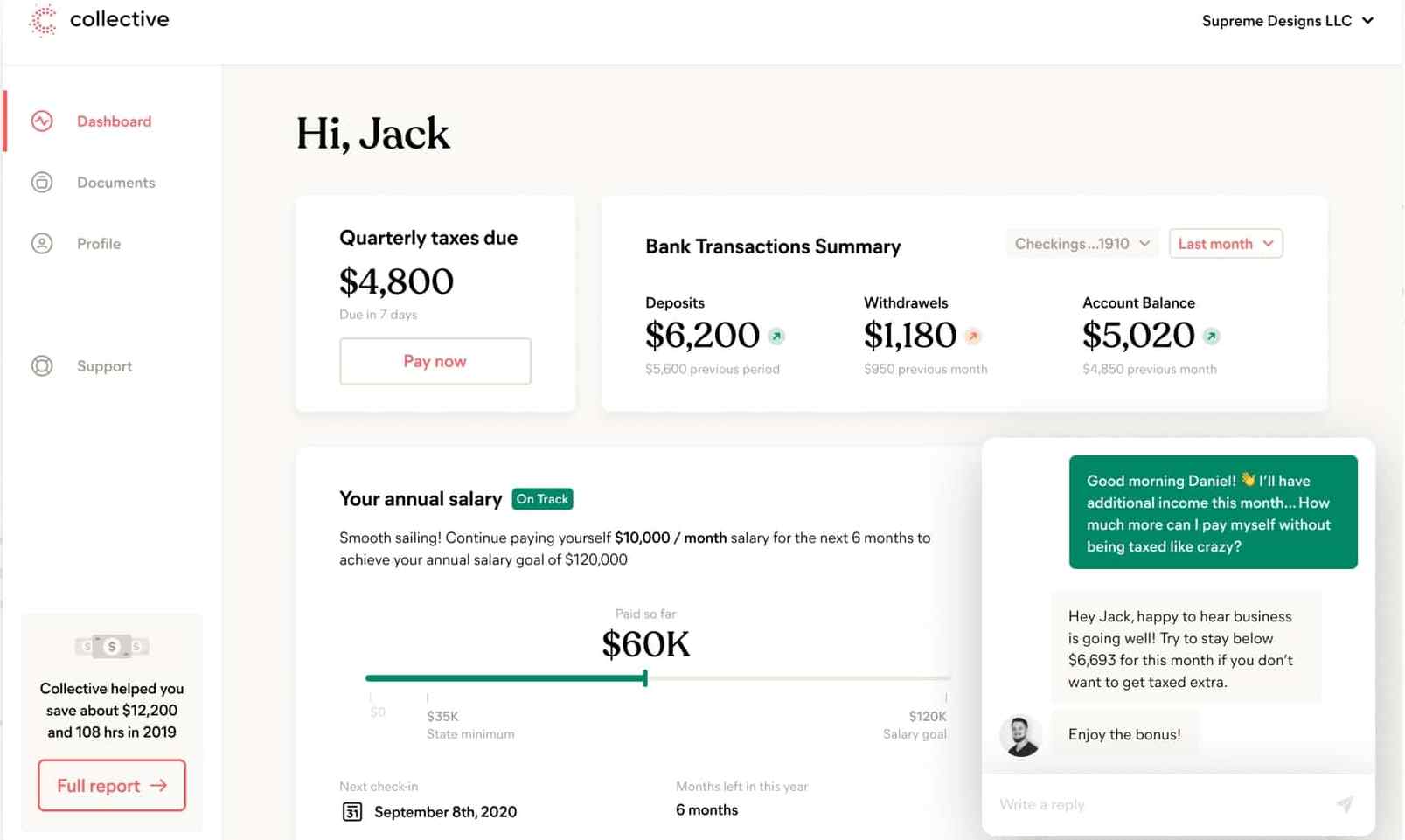 All of this costs $249 per month, though this is $199 for a limited period, meaning that Collective likely isn’t aimed at those doing a little sporadic freelancing work in their spare time — it’s more likely to appeal to full-time freelancers. But this fee includes company formation support, and access to QuickBooks Online, Gusto, accounting and tax filing guidance, state compliance, and general guidance as and when required.

Additionally, Collective said that it’s piloting a full bookkeeping service for an extra $99 – $199 per month, for those who want to completely hand-off their accounts to someone else. Those who prefer to keep their own accounts, and just need help and advice, can forego this part of the service.

“Some members prefer to do their own accounting, and just need our help to set up and advise on bookkeeping, but we are finding that many members prefer that we handle the books, as well,” Radfar told VentureBeat.

Gradient Ventures’ involvement in Collective is also curious, given that the Google-backed VC fund focuses entirely on AI startups. According to Radfar, Collective will use machine learning and AI technologies to “help inform the automation of bookkeeping and accounting.” More specifically, he indicated that Collective can automatically categorize expenses based on their type, which in turn can help “fuel” automatic tax filing. “If you have clean books, it’s much easier to automate taxes,” Radfar said.