There's a level of complexity to army management in Fire Emblem Warriors: Three Hopes that can make it hard to believe this is the same developer who once gave us nothing but the early Dynasty Warriors games. Back then, the Musou "franchise" was almost entirely based on player performance hacking and slashing across maps, with limited growth systems and nothing to equip sans increasingly powerful weaponry.

In Fire Emblem tradition, and hewing appropriately closely to Three Houses, in particular, Three Hopes contains a plethora of skills and abilities separated into several categories. Some are automatic. Others must be equipped. Slots are limited. Don't get in over your head — read this guide, and you'll grasp everything necessary to concoct the best character builds in Fire Emblem Warriors: Three Hopes. 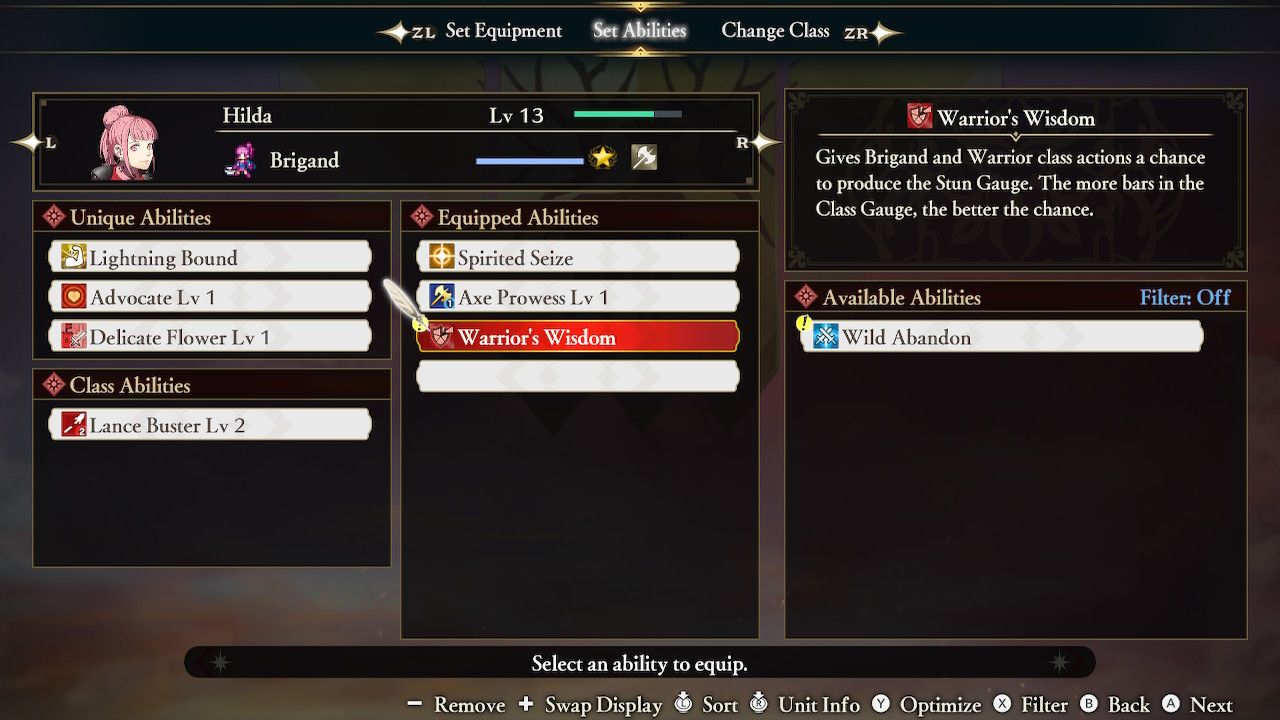 There are three distinct categories of abilities in Fire Emblem Warriors: Three Hopes. We include the word "skills" in this guide since many players will find the terms interchangeable, plus the game's own NPCs often swap between them, which can cause no shortage of confusion.

Each of these is fundamental to fully customize your characters and/or overarching battle strategies. Some are considerably more prolific than others, but all three categories come together to forge a complete overview of every character in the game.

Far and away the most plentiful, Equippable Abilities are learned at a rapid clip as units advance in level within the classes you have assigned them. Every class will teach well over a dozen of these as units progress from "E" Rank up to 'S." There is enough overlap that, later on, it may seem like some classes teach fewer abilities. In truth, you've simply mastered a portion of what the newer class would have offered.

Equippable Abilities come in several forms. There are weapon bonuses that can help to fend off certain enemy types. There are class-focused abilities that aid a given class in furthering its identity; the Brigand and Warrior classes, for example, share "Warrior's Wisdom." This causes every class action to (potentially) boost the Stun Gauge. This is just one of many examples, and since equippable abilities are interchangeable, you may find it prudent to mix and match between classes.

Is the starting number of equippable ability slots too slim for you? Later in the game, you'll be hard-pressed to choose between so many stellar picks. Thankfully, the Tactics Facility can teach your units techniques that will increase the number of slots, allowing you to sacrifice fewer nifty perks in the pursuit of others.

Class Abilities are likely the easiest to grasp. They're often solitary, though they come in groups of two or three, and they're innate to a class so they don't need to be equipped. That said, they frequently overlap conceptually with equippable abilities, as is the case with the Brigand's Lance Buster that serves to increase damage against lance-wielders like Cavaliers.

This type of skill is active by default, and cannot be disabled (not that there would be any practical reason to do so).

Once again, the Tactics Facility can help here. You can level up Class Abilities to increase their effectiveness.

These are the lifeblood of individual characters. Some of these are shared between two or even three units, but the bulk of them offer entirely unique approaches to strategy on the battlefield.

Once again, we'll reference Hilda's character sheet above; Lightning Bound adds in some nice electric-based damage, whilst Advocate improves her adjutant value (Hilda's a self-professed cheerleader, after all!) and Delicate Flower is an ironic label for something that boosts her ability to take over enemy strongholds.