In the lore of Dark Souls, there are said to be four Lords who found the Lord Souls and defeated The Everlasting Dragons. Of these lords, you encounter three in the game: Nito, the Lord of the Dead; The Witch Of Izalith (who either created or was turned into one of the worst boss battles of all time, The Bed Of Chaos), and Gwyn, the Lord of Sunlight, the former king of Lordran and the game's final boss. However, that leaves one Lord unaccounted for: The Furtive Pygmy, who you never see throughout your harrowing journey.

So who and what exactly is The Furtive Pygmy? How can a character who discovered the titular Dark Soul seemingly go missing and not appear in the game despite being such an important part of the lore? Like most questions surrounding Dark Souls, there aren't many concrete answers, but there is a whole lot of wild speculation.

Who Is The Furtive Pygmy And What Did They Do? 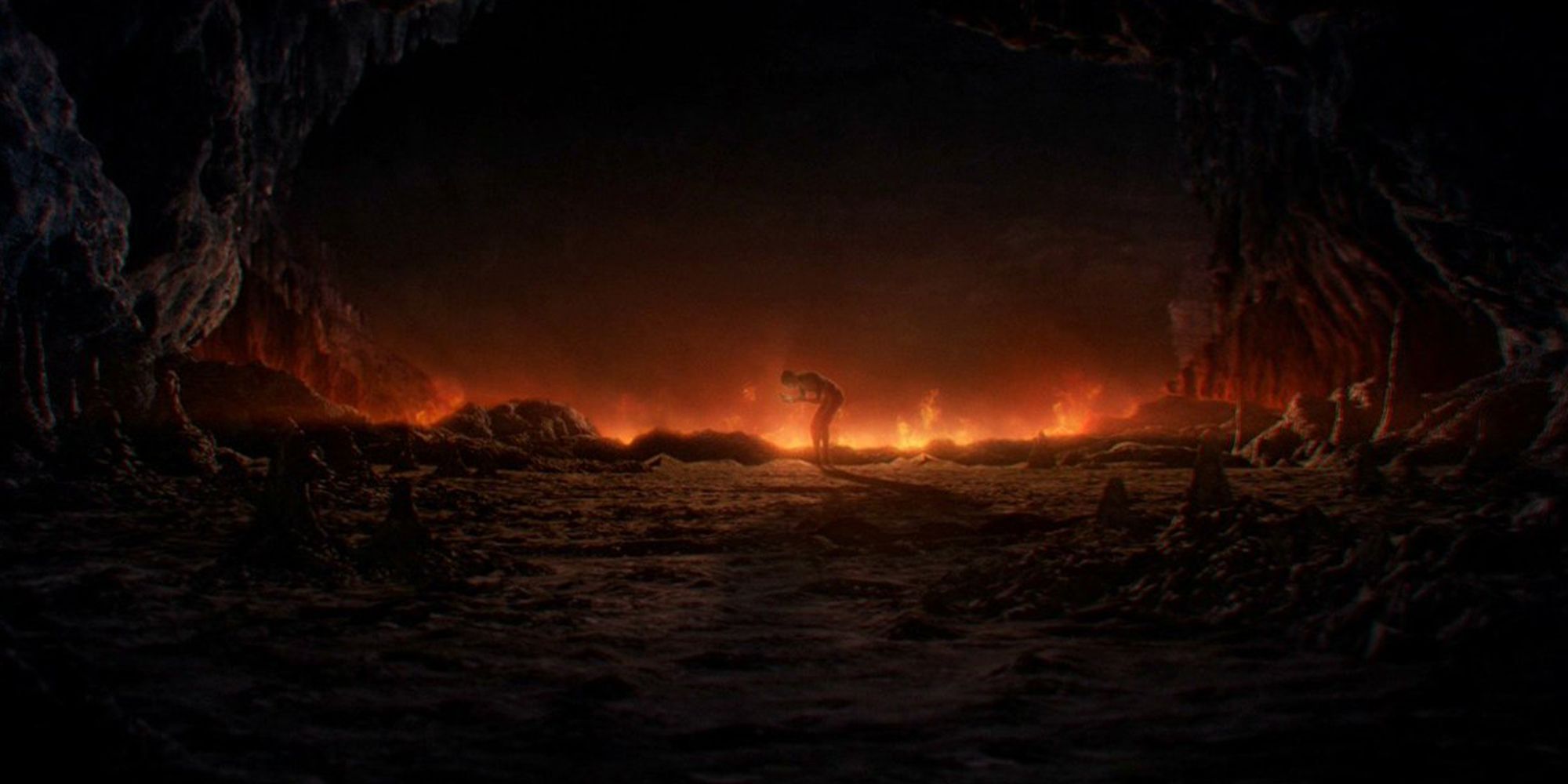 The Furtive Pygmy pops up in Dark Souls' introductory cutscene as one of the four Lords who find the Lord Souls, defeat the immortal dragons, and bring about The Age Of Fire. However, even though he was involved in all these events, his exact role isn't known. We also never learn his fate, so it's unknown whether he's dead or alive. This lack of information makes it difficult to discern just how large of a part he played in shaping Lordran's history.

In that same cutscene, we only get a brief glimpse of what The Furtive Pygmy looks like. Nito, The Witch Of Izalith, and Gwyn can all be clearly seen, but The Pygmy can only be spotted from a distance clutching their newfound Soul in front of a wall of fire. We can only tell that they're some kind of hunched-over, emaciated, hollow human with shriveled hands. All we truly know about their appearance is, via an interview with series creator Hidetaka Miyazaki on a Japanese podcast called Game No Shokutaku, they're male — finding the podcast itself can be difficult, but an industrious fan translation of this interview can be found here.

After you travel to The Abyss and defeat The Four Kings, you'll meet the primordial serpent, Darkstalker Kaathe. He'll tell you that while the other three Lords found regular Lord Souls, your progenitor found The Dark Soul, which is said to be different from the rest. In the aforementioned Mizayaki interview, he states that The Pygmy fragmented his Lord Soul, which led to the creation of humanity. So the progenitor in question has to be The Furtive Pygmy, which means that Kaathe and his followers are his disciples. Since Kaathe wants you to end The Age Of Fire and begin The Age Of Dark, this may have been the wish of The Furtive Pygmy as well. That being said, it is entirely possible that Kaathe is deceiving you to achieve his own goals.

References To The Furtive Pygmy Across The Dark Souls Series 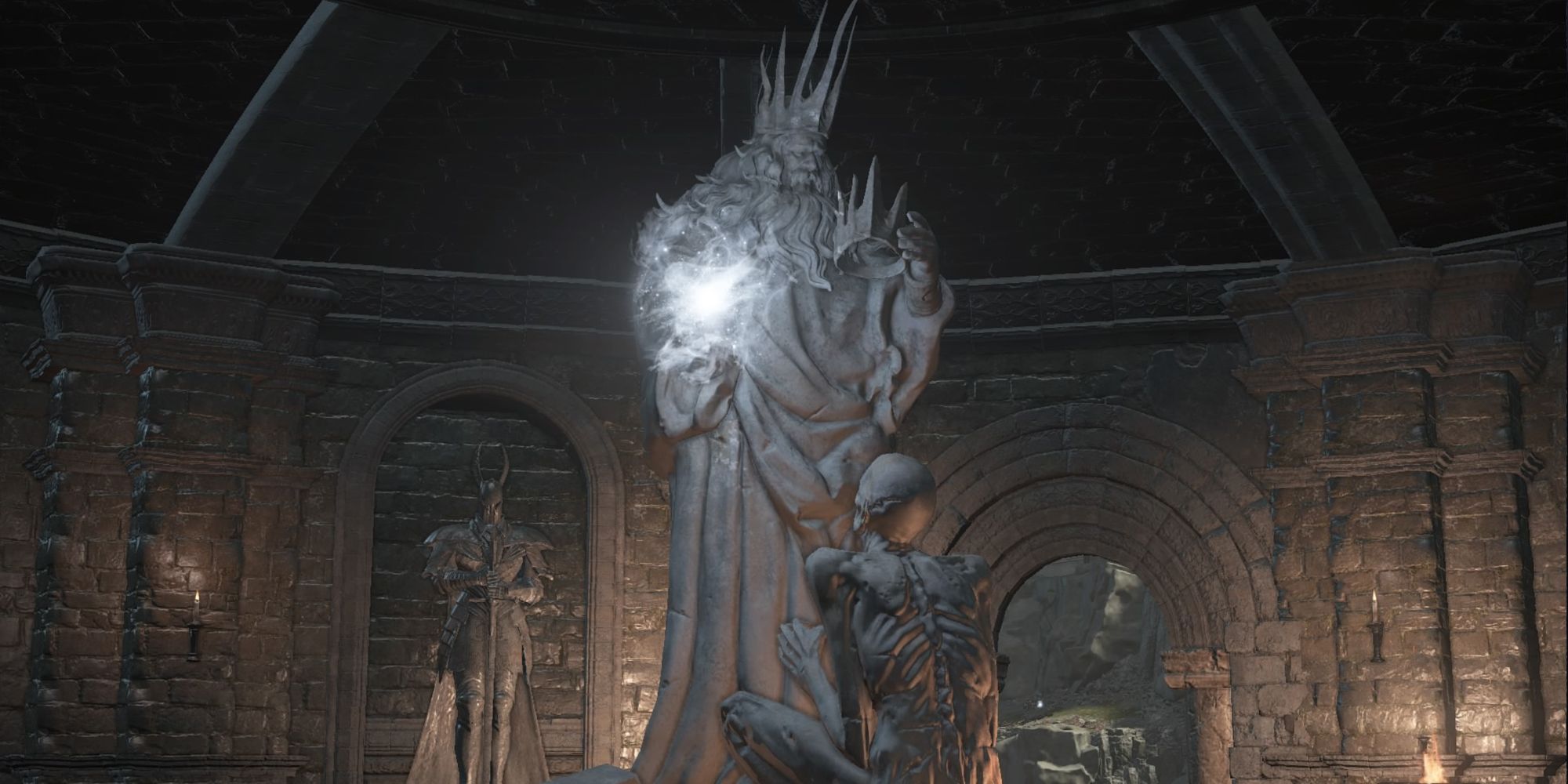 The Furtive Pygmy never appears in the Dark Souls games and his existence seems to be all but forgotten by most. This may be due to the actions of Gwyn. He and his knights did everything in their power to prolong The Age Of Fire because they feared the arrival of The Age Of Dark and the rise of humans. Gwyn would even go on to sacrifice himself to link The First Flame and keep it burning. If what Kaathe says is true and The Pygmy wished to bring about The Age Of Dark, it's possible that Gwyn destroyed all records of The Furtive Pygmy in written history. It wouldn't be the first time something like this occurred as Gwyn's firstborn son, The Nameless King, was also erased from history after aligning with the dragons.

Kaathe and his followers are some of the very few NPCs in the entire trilogy that not only mention him but follow him and pursue his goals. In Dark Souls III, Yuria Of Yondor wants you to begin The Age Of Dark as well. If you decide to kill her, the last thing she says is "Kaathe…I have failed thee." By following Kaathe, this means that Yuria is essentially a follower of The Furtive Pygmy as well.

Another possible reference to The Pygmy comes from Dark Soul III's second DLC, The Ringed City. When you reach the end just before encountering Slave Knight Gael, you see someone who is gravely injured crawling towards you. This is The Pygmy King, who (along with The Pygmy Lords) ruled over The Ringed City. The rest of the Lords are slaughtered and devoured by Gael in order to obtain the remnants of The Dark Soul. The Pygmy King and these Lords are said to be descendants of The Furtive Pygmy and The Ringed City was gifted to them by Gwyn along with his daughter Filianore. You can find a statue that depicts this with Gwyn bestowing a crown upon the head of a Hollow, although some theorize that the hollow in the statue could be The Furtive Pygmy himself.

Theories About The Furtive Pygmy's Identity

Going by all the scattered pieces of lore we have, it's impossible to know the true identity of The Furtive Pygmy. However, this hasn't stopped the Dark Souls community from coming up with several fan theories that have a decent amount of evidence behind them.

Manus, Father Of The Abyss

One of the most prevalent and popular theories is that The Furtive Pygmy is actually Manus, Father Of The Abyss, the final boss of Dark Souls' only DLC, Artorias Of The Abyss. It is said that the people of Ooacile dug up the grave of Primeval Man, a being that would go on to become Manus.

Manus is referred to as The Father Of The Abyss. The Abyss is an area that is made up completely of Dark energy. Humans are immune to Dark since they are born from fragments of The Dark Soul. While within The Chasm Of The Abyss, you even run into several enemies that resemble the Humanity item you use throughout the game. When Manus is defeated, many new beings that you meet – or fight – in Dark Souls II such as Nashandra, Alsanna, Elana, and Nadalia are created from fragments of his soul.

So Manus is the father of a place that corrupts other beings but not humans, is referred to as Primeval Man, and has a soul that when fragmented creates new life. Also, the name Manus could very well be derived from the name of a character from German mythology, Mannus, who is the father of mankind. From all of that, one could draw the conclusion that Manus is indeed The Furtive Pygmy after having been warped by the actions of the people of Oolacile. 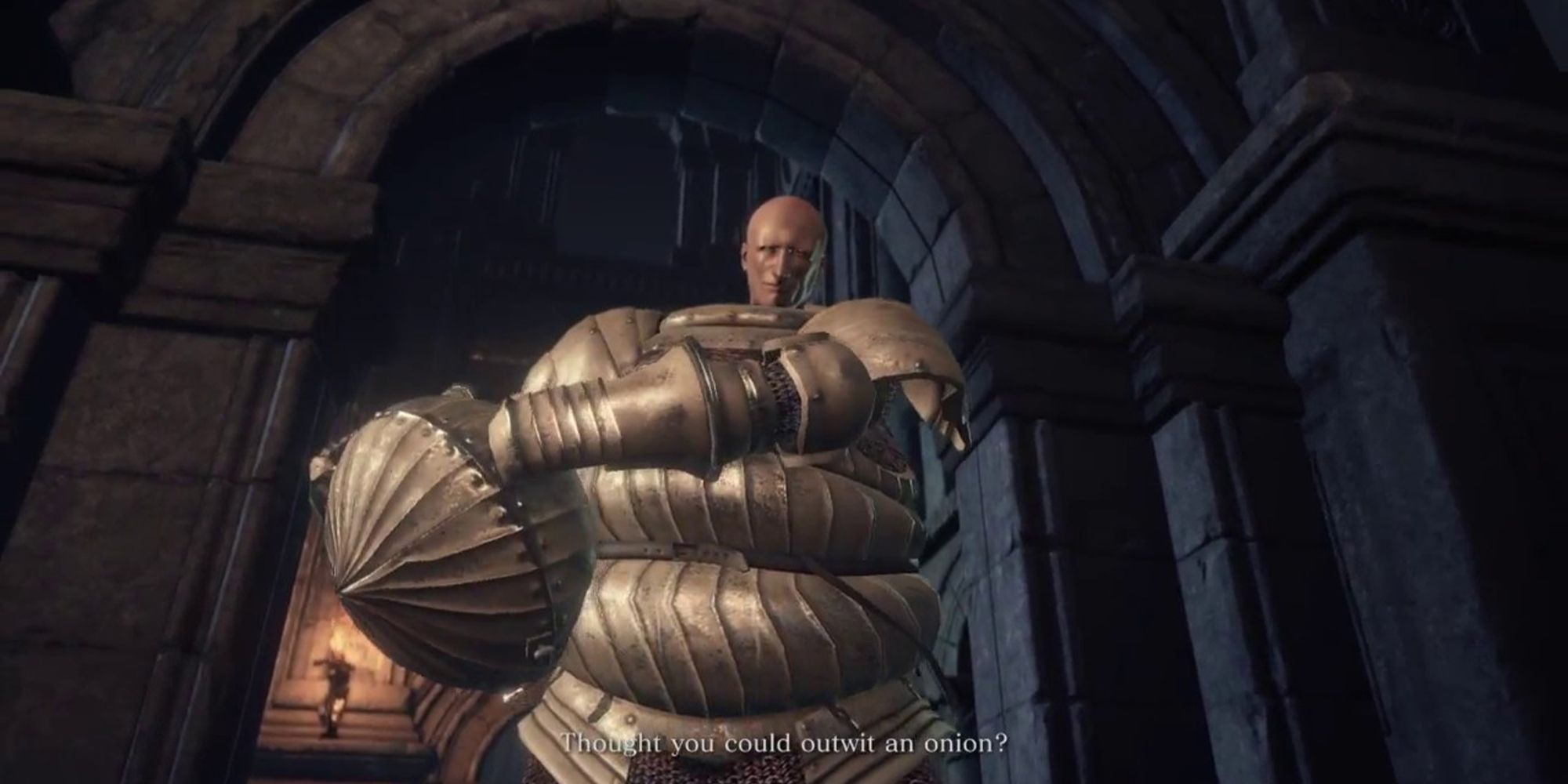 One very plausible theory is that The Pygmy is none other than Unbreakable Patches. His continued existence in the Dark Souls franchise is somewhat inexplicable. We know almost nothing about him except that he's a trickster who is constantly screwing people over. Despite not seeming like much of a warrior, he manages to trek across incredibly dangerous areas filled with powerful enemies and survive. The Dark Souls series takes place over the course of hundreds, perhaps even thousands of years, yet Patches never hollows, ages, or goes insane. He makes it all the way to the end alive, well, and with his sanity intact.

He also despises clerics, who all worship the gods. As someone who wishes to bring about The Age Of Dark, it makes sense that Patches would hate those who follow Gwyn and other beings looking to continue The Age Of Fire. If Gwyn truly did erase him from history, that would be another reason why he despises them.

One of the things that Patches says that could be a giveaway to his identity comes in The Ringed City DLC. The Amnesiac Lapp questline is all about helping Lapp recover his memories so he can remember his name. Once you succeed in this quest, Lapp reveals himself to be Patches and kicks you off a ledge. He then spouts this monologue:

"Every age, it seems, is tainted by the greed of men. Rubbish, to one such as I, devoid of all worldly wants! Hmmm, I dunno, maybe it's just the way we are. I'll stick you in my prayers. A fine dark soul, to you."

This is confirmation that Patches has lived through several ages. Throughout each one, he is disgusted by the greed of men. He says "maybe it's just the way we are" in the same manner as a parent speaking to a child. As The Furtive Pygmy, the creator of Man, he may be disappointed in his progeny's continued avarice across history. After all, in that opening cutscene, The Pygmy is depicted as a simple hollow who has nothing until they find The Dark Soul. It seems like a hollow who comes from humble beginnings would hate those who are consumed by greed like the gods. In fact, with his bald head, he even kind of resembles the hollow Pygmy in that same cutscene.

With his near-immortality, unexplained resilience, lack of worldly wants, and hatred of clerics, it's not outlandish to think that Unbreakable Patches is The Furtive Pygmy. After being forgotten, he adopted this persona and traveled across the land tricking the greedy men who squandered the gift of creation that he bestowed upon them. He wishes for The Age Of Dark so the slate can be wiped clean and mankind can take their rightful place as the rulers of the world. 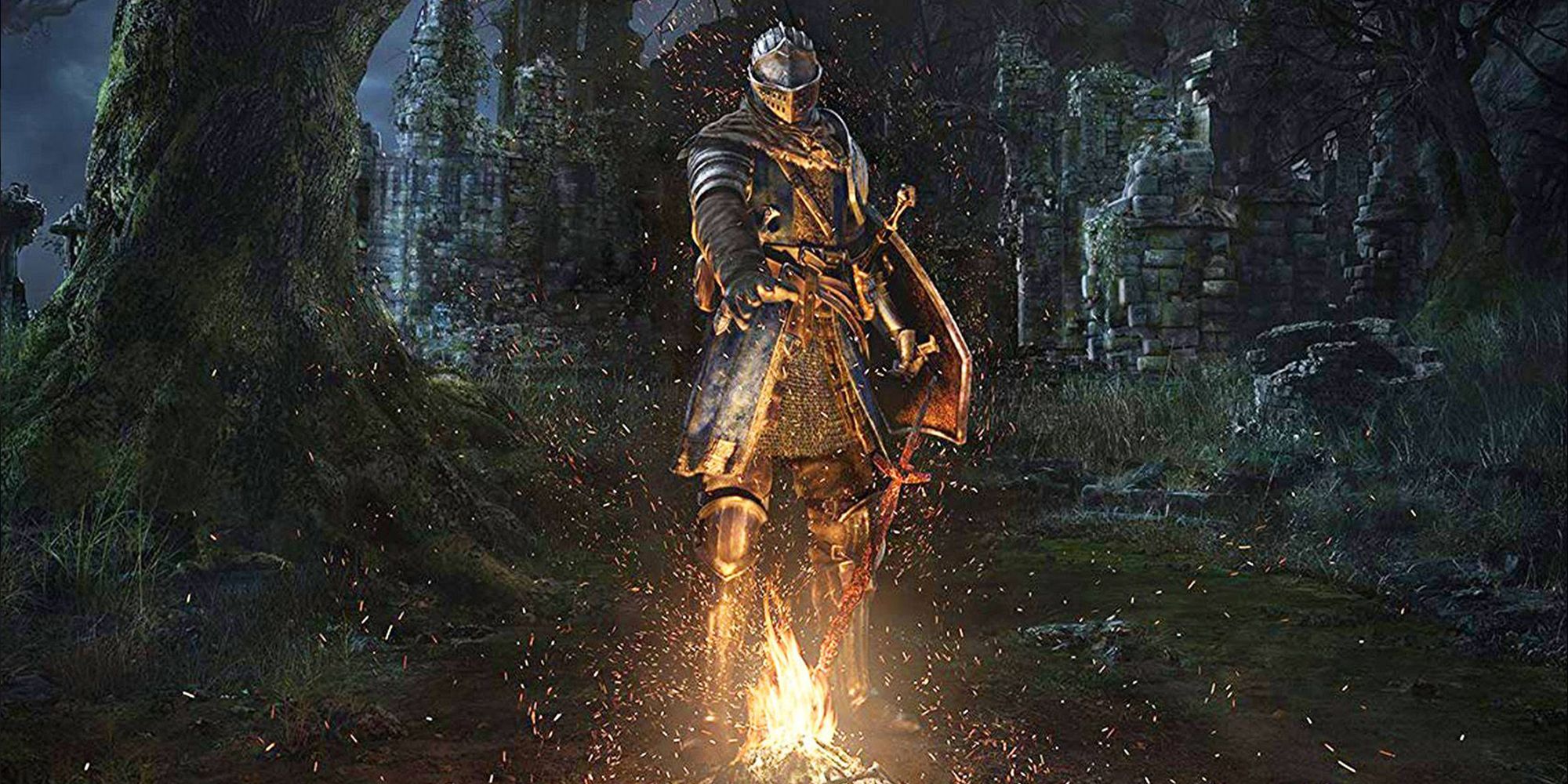 One of the more bizarre theories is that The Furtive Pygmy is actually the player, also known as The Chosen Undead. After all, the opening cutscene declares that The Furtive Pygmy is "so easily forgotten." Is there anyone else in the game who could be more forgettable than you? Aside from whatever you call yourself on the character creation screen, you don't even have a name. You're much smaller in stature compared to the other enemies in the game, which fits the definition of a pygmy. Yet, despite being short, you're incredibly strong and can kill just about anything in the game, including two of the Lords and The Bed Of Chaos. It's almost as if you're a much more important part of this story than anyone else.

We also never truly learn why your character is imprisoned at the start of the game. Yes, the undead are sent to the asylum in order to contain the curse, but it seems odd that the rest of the undead are much weaker and mindless in comparison to you. Once you escape, you're able to overcome every obstacle put in front of you. Maybe Gwyn himself placed you there to impede your quest to begin The Age Of Dark.

That being said, it seems odd that Kaathe doesn't recognize you if this is the case. It's possible that he's forgotten what you look like or that he doesn't know what your non-hollow form looks like. Or maybe he's been a liar this whole time and he's never met The Furtive Pygmy. That might also explain why you might link the fire after defeating Gwyn as this whole Age Of Dark malarkey may have been invented by Kaathe and you never wanted that at all.

So maybe that's why you never meet The Furtive Pygmy: because it's been you this whole time.

Of course, we'll never know for sure who The Furtive Pygmy is as Dark Souls has some of the vaguest lore and exposition out of any series out there. So unless Miyazaki himself comes out and says it, we'll just have to keep guessing throughout the many ages of men.