Valentina Milanova’s decision to reinvent the tampon came with a long list of daunting obstacles.

Her company, Daye, is a science-based startup that needs regulatory approval to sell medical products containing cannabis and that manufactures its own tampons. Oh, and she needed to raise money for a femtech product from a male-dominated VC industry.

That a Bulgaria-born, solo female founder managed to secure backing from A-list venture firms, recruit top talent, and launch a cannabis-infused tampon designed to reduce pain from cramping is a testament to her self-confidence and determination not to listen to the many people along the way who insisted it couldn’t be done.

“We definitely struggled in communicating the purpose of the product to the investment community, which is predominantly male,” Milanova said. “We have a lot of male investors who were very supportive of the idea and could understand the implication of taking pain away from your period every month. But the majority of investors that I met struggled with saying the word ‘tampon’ out loud.”

Milanova spoke to VentureBeat as part of a podcasting partnership with Samsung Next at the recent Slush technology conference in Helsinki, Finland. (Previous episodes include interviews with founders of Adyen, Tier Mobility, Ada Health, and IQM Quantum.) The full conversation with Milanova can be heard here.

Milanova is also a prime example of the emerging European startup ecosystem. As it’s still quite young, entrepreneurs don’t have many examples to follow and have to search far and wide for community, particularly if they are from more remote corners of Eastern Europe. When Milanova left Bulgaria as a teenager a decade ago, the country didn’t have the startup ecosystem that has blossomed in recent years.

After working as a nanny to raise money for college, Milanova moved to London, where she got degrees in business, economics, and law. Following detours into journalism and event planning, her curiosity about how things worked took her to gigs at Techstars and then as a venture associate for Founders Factory. But while she held down these day jobs, she had already begun building Daye.

“During that time, I had my own idea for my own company, which starts with a pain-relieving tampon,” Milanova said. “I guess why I became a founder in the first place is because I’m one of those constantly frustrated people that think they can do everything better. So whenever I go to a restaurant or check out on an ecommerce website, I always think this could have been done better or customer service could have been better in that way.”

But entering a health-related field also meant dealing with a host of subjects she has no background in, from science to manufacturing.

“I decided one day that I was going to make a tampon that would be better in every way … I could identify tampons should be better,” Milanova said. “And I decided not to cut any corners. And then I started hiring for the weaknesses in my knowledge and the gaps in my experience.”

The company conducted clinical trials in Bulgaria in partnership with the Centre for Applied Science and Innovation at Sofia Medical University. Daye also established a medical board, which includes two University of Liverpool professors. This led to limited regulatory approval in the U.K.

Last August, Daye began shipping its first tampons to customers, but only in the London area for now. The company offers two varieties: the Naked Tampon, which is 100% cotton and biodegradable, and the CBD Tampon, which includes full spectrum CBD (meaning it contains all cannabinoids from the plant) for pain relief. The company’s research found that receptors in the vagina were optimal for delivering CBD-based pain treatment.

Throughout the development process, Milanova found the key was remaining confident while also being able to listen to feedback and criticism.

Women’s health has long been overlooked as a market ripe for disruption. But that is now starting to change. According to CBInsights, the market for women’s health products is projected to be $50 billion by 2025. Recognizing the opportunity to revolutionize some of the traditional products and services in the sector, so-called femtech companies have raised $500 million in venture capital over the past five years.

That tally includes Daye, which raised $5.5 million from Index Ventures and Khosla Ventures. Milanova began pitching the company furiously through LinkedIn messages, finally managing to land a series of meetings that resulted in funding.

Milanova said she’s taking a conservative approach to growth and moving slowly to get regulatory approval. Her two venture backers have in-house medical partners that do the due diligence on science-based startups.

“That was helpful for us,” Milanova said. “Having an investment partner that understands the challenges that you’re going through around clinical validation and around regulatory approvals, versus a traditional software investor who would maybe put a little bit too much pressure on science startups to launch prematurely or try and achieve higher growth numbers than they reasonably can.”

The company spent the past year setting up manufacturing operations in South London and running manufacturing pilots. Daye also works with a charity called Working Chance that provides job opportunities for women leaving prison to fill those factory positions.

Over the next 12 months, the company hopes to move beyond the pilot batches, which produce 10,000 tampons per month, into full-scale manufacturing. Daye also has an application into the U.S. Food And Drug Administration for approval to sell its tampons in the U.S. 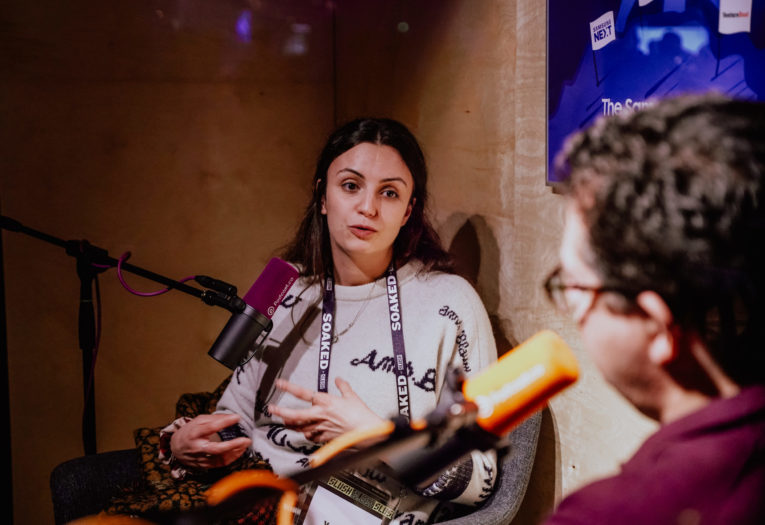 Above: Valentina Milanova, CEO and founder of Daye.

On the cusp of a full-scale international rollout, Milanova is still pushing herself to learn and grown as a leader.

“I feel intimidated all the time,” Milanova said. “I struggle with my imposter complex 24/7. But I don’t let it get in the way of doing these things.”