Destiny 2 has a wide range of weapons for Guardians to choose from. From handheld Sidearms to laser rifles, you have hundreds of options for disintegrating your foes in the Crucible. Sniper Rifles serve as one of Destiny 2's most satisfying weapon archetypes, capable of one-taps to the head.

With enough skill, a good Sniper Rifle user can swing a Crucible match in their team's favor. Limited ammo does hurt Sniper Rifles when compared to other categories, yet no other Special in Destiny 2 can one-shot players from such great distances. If you're looking to become a sniping powerhouse, these ten weapons will make that journey a little bit easier. 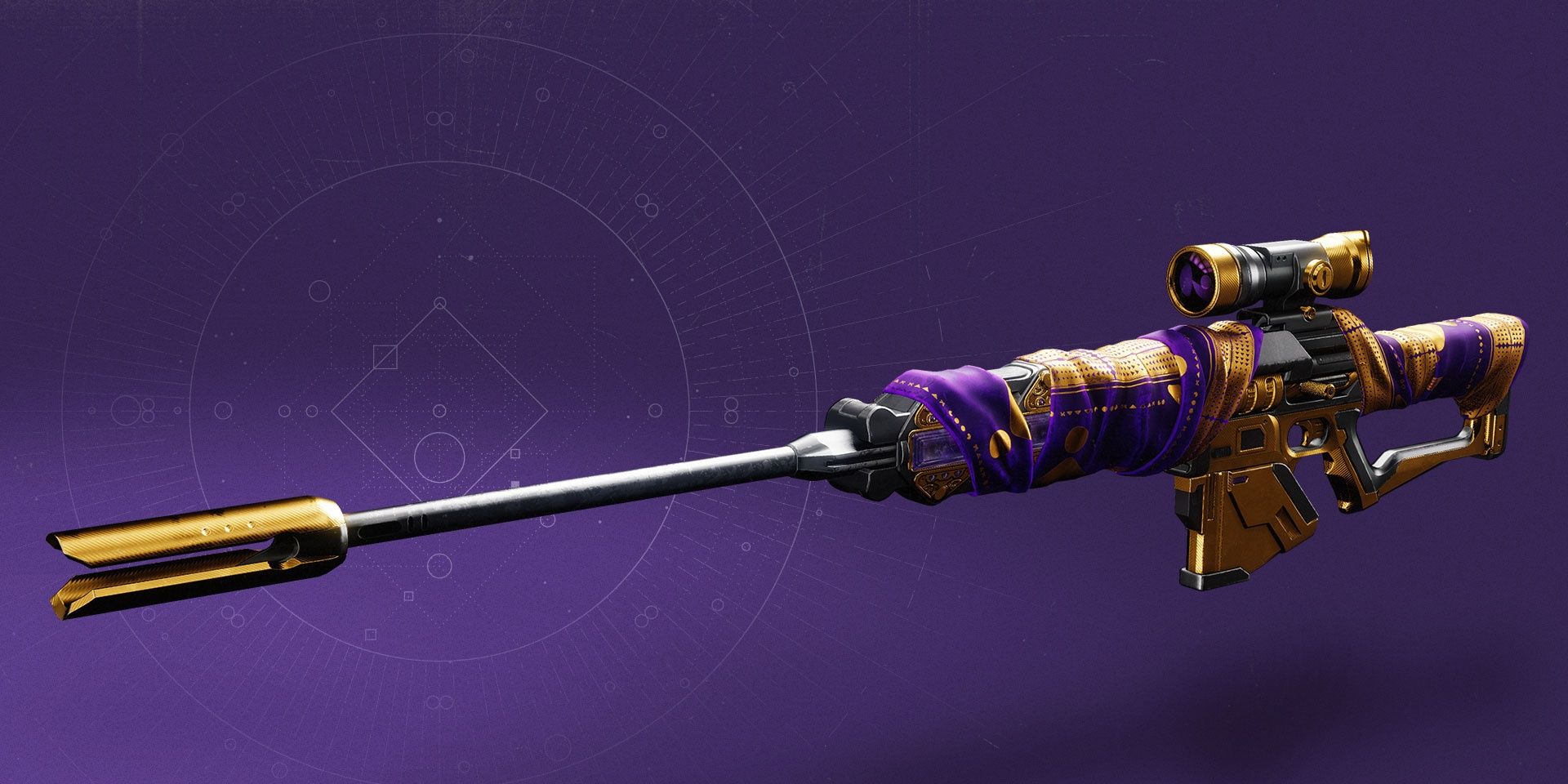 How to obtain: Purchased from the Exotic Kiosk in the Tower. Costs 75,000 Glimmer, 100 Legendary Shards, 2 Enhancement Prisms, and 1 Ascendant Shard.

Adored is in a strange spot in today's meta. This weapon takes inspiration from Beloved, a Sniper Rifle that returned in Season of the Haunted with a craftable frame. 1000 Yard Stare also fills a similar niche. Under normal circumstances, that would make Adored obsolete in today's meta, yet this weapon is still worthwhile due to its acquisition method.

Adored is a static roll that can be purchased from the Exotic Kiosk. All it takes is some Season Pass levels to get this weapon. It has great base stats, comes with Killing Wind and Snapshot Sights to improve its handling, and has one of the cleanest scopes you'll find on a Sniper Rifle. Adored is an excellent starter weapon for Guardians that want to get into sniping. For sniping pros, you're better off looking elsewhere. 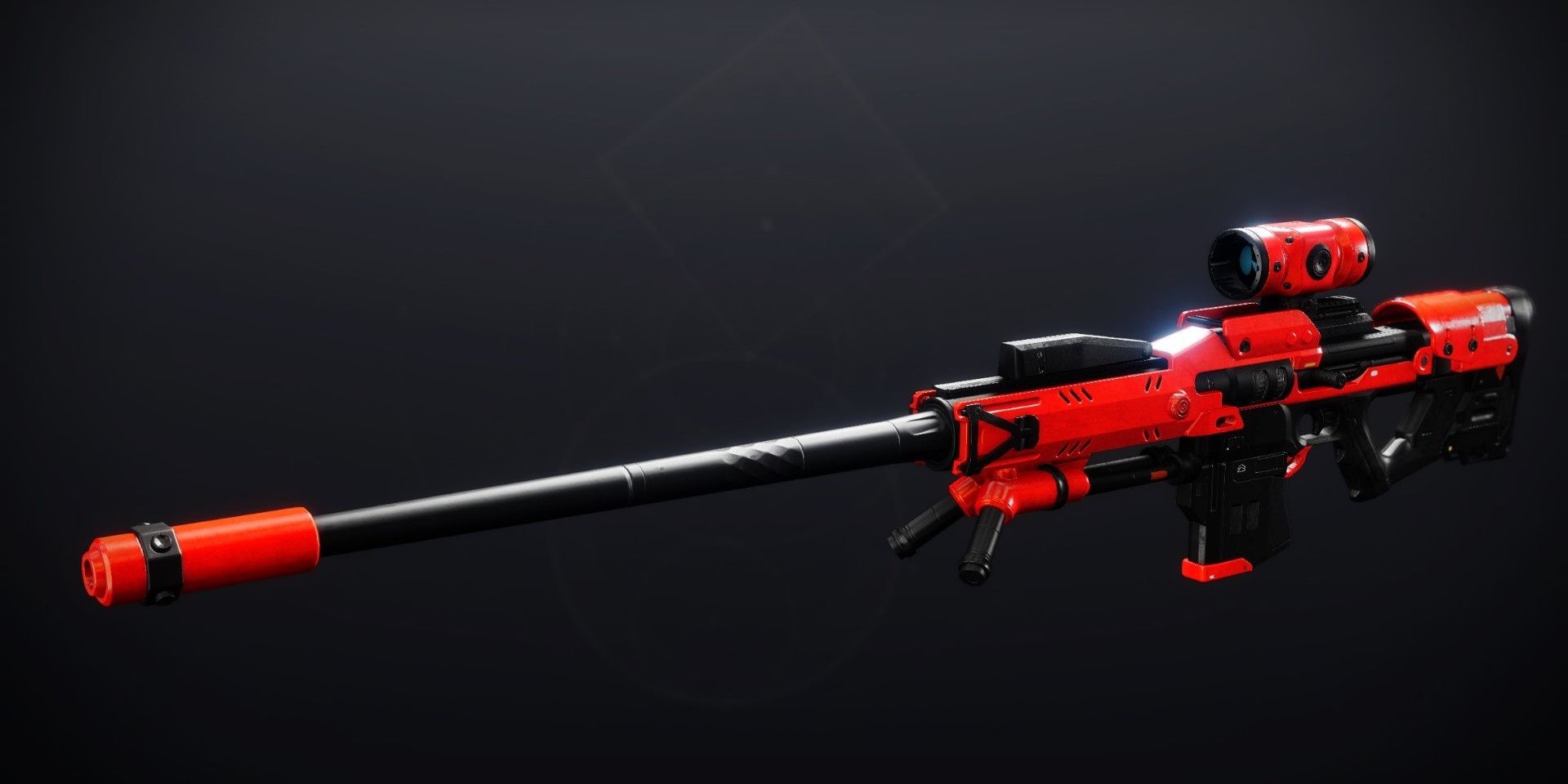 How to obtain: Crucible matches and Engrams.

Frozen Orbit is a one-shot machine in the current sandbox. This is the only 72 RPM Sniper Rifle to roll Kill Clip, a perk that causes all of your shots to instantly kill Guardians. You'll need to get comfortable moving from Guardian to Guardian for ammo, yet the lethality of Frozen Orbit more than makes up for this. For 6v6 modes, this Sniper Rifle is nothing short of fantastic. Pair Kill Clip with Surplus to help this weapon's otherwise lackluster stat package. 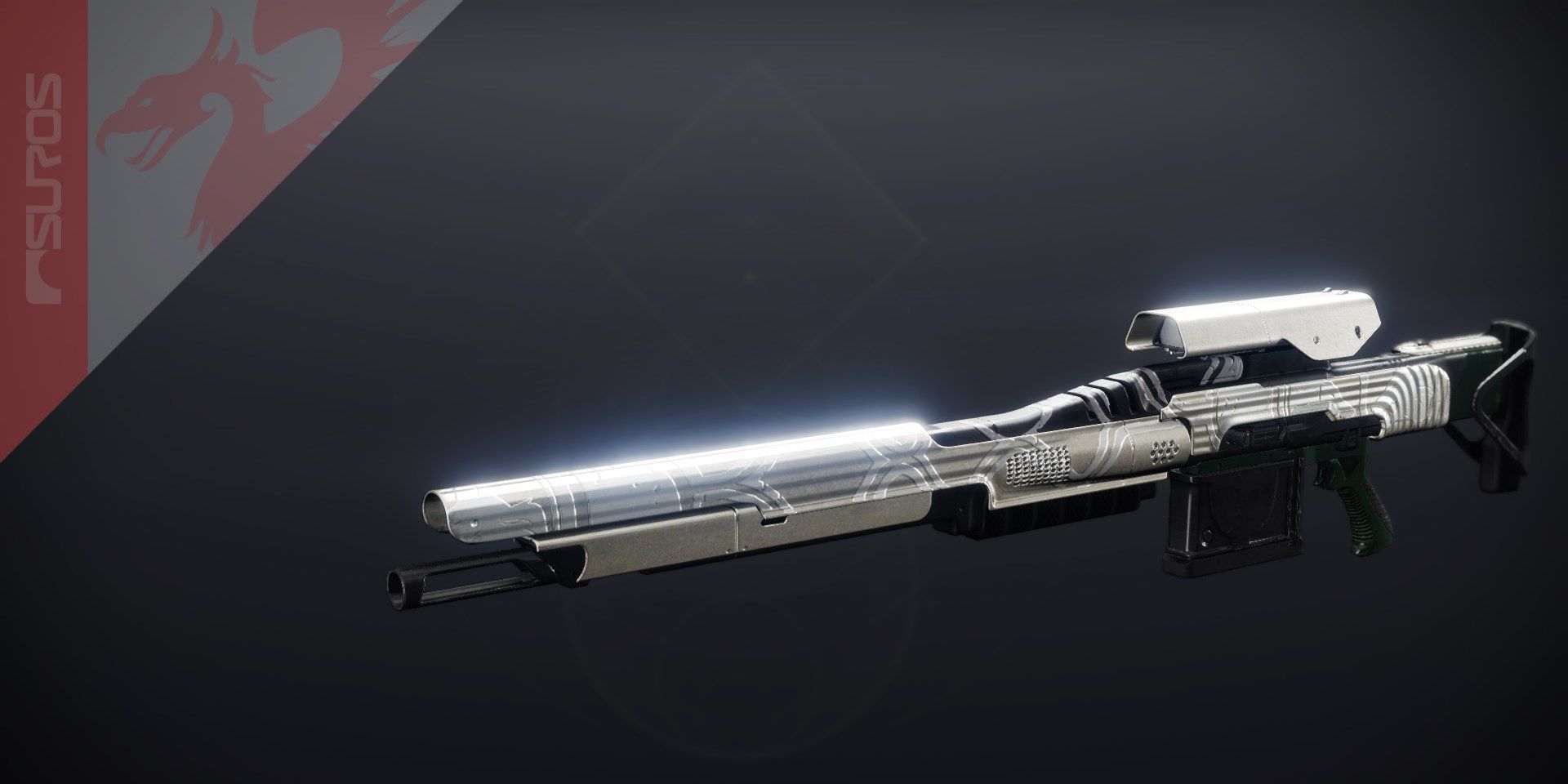 How to obtain: Iron Banner matches and Engrams.

Occluded Finality is a weapon you either love or hate; there's no in-between. Obtained from Iron Banner, this Sniper Rifle can reach 100 range and has a zoom value of 58. In laymen's terms, this gun has the Hubble Telescope installed atop the receiver. When you ADS, you'll be looking into your enemy's very soul.

If you can get used to the absurd zoom, Occluded Finality is one of the most forgiving Sniper Rifles in Destiny 2. Headshots are a common occurrence with this gun, especially if your roll has Opening Shot. Give this weapon a try if you get one to drop; you'll be surprised just how consistent this sniper can be. 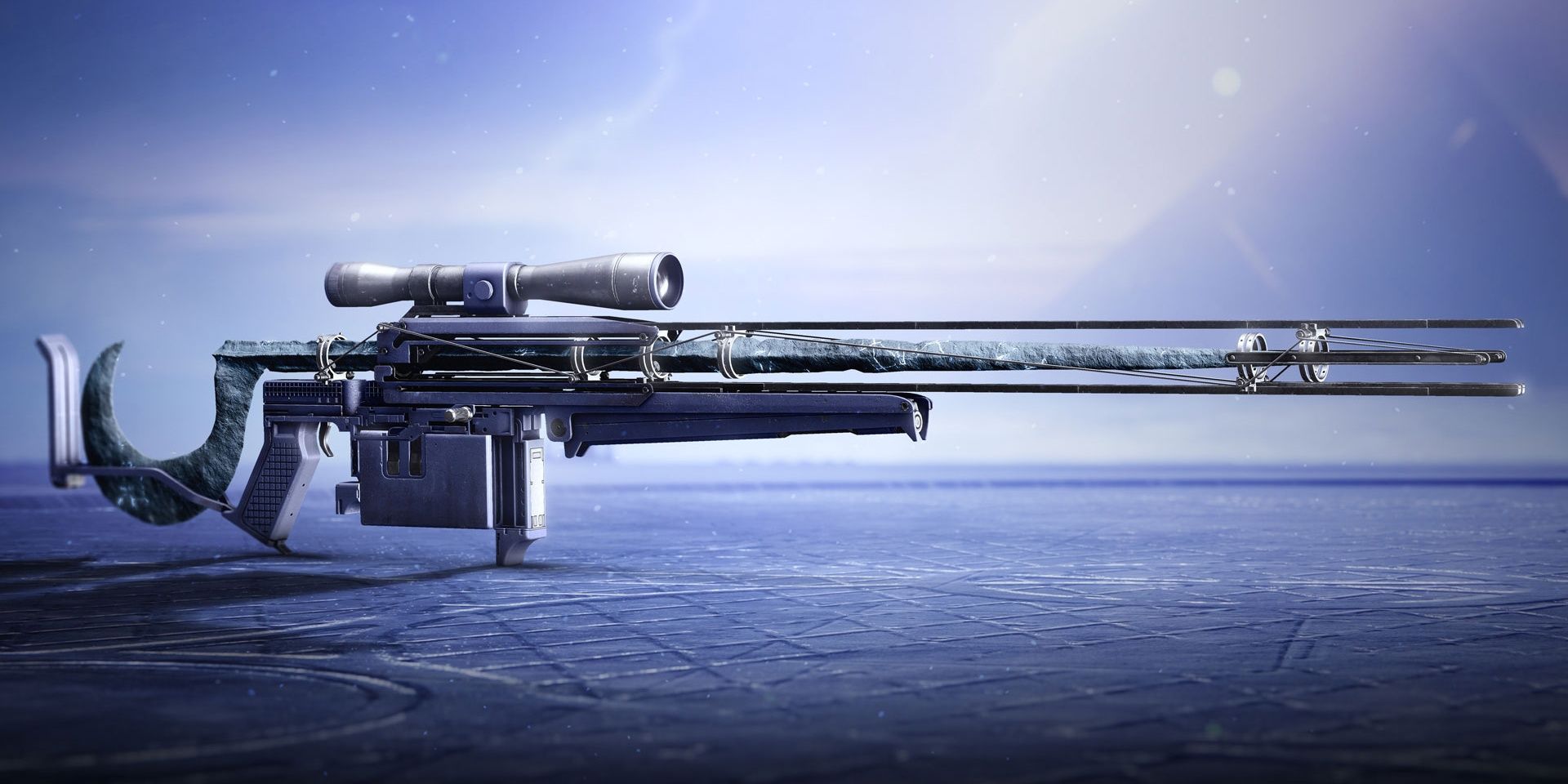 How to obtain: Purchased from the Exotic Kiosk in the Tower. Costs 1 Exotic Cipher, 150,000 Glimmer, 150 Spinmetal Leaves, and 2 Ascendant Shards.

Landing a headshot is one thing, but you haven't truly experienced the joys of sniping until you've wiped an entire team with a single Cloudstrike shot. This Exotic Sniper Rifle releases lightning bolts from the sky whenever you land a precision final blow. This lightning bolt is capable of one-shotting Guardians at all Resilience levels. So long as you can the occasional headshot, ammo won't be an issue in 6v6 modes.

Even in more competitive 3v3 activities, Cloudstrike manages to impress. Great base stats and a clean scope make sniping a breeze in the right hands. Spec for additional handling through mods or Exotic armor, and you have yourself one of Destiny 2's best Sniper Rifles for PvP.

Silicon Neuroma is one of the most forgiving Sniper Rifles you can use in the current meta. Snapshot Sights and Opening Shot is the chase roll for most players, allowing you to quickly ADS and land a headshot with a great deal of forgiveness. If you're a more aggressive sniper on the battlefield, consider replacing Snapshot Sights with Firmly Planted for even more accuracy.

While it's tied to an endgame PvE activity, this weapon is so consistent that PvP sniper mains should consider farming for this weapon whenever it's in the current reward pool. This weapon also has an Adept variant if you can handle Grandmaster difficulty. 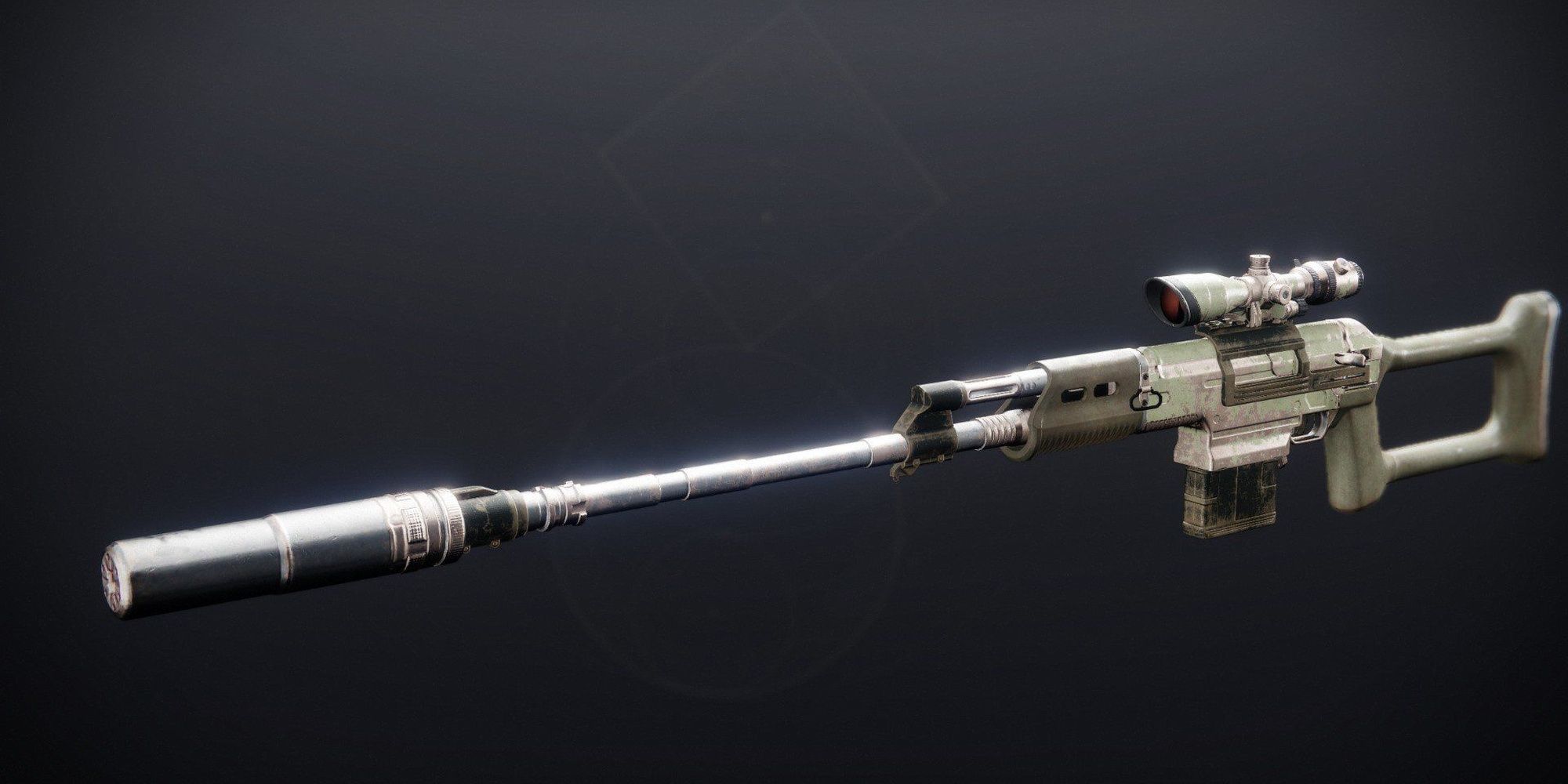 How to obtain: Legendary world Engrams.

Shepherd's Watch is a Kinetic version of Father's Sins, capable of rolling Under Pressure and Snapshot Sights. This combination is fantastic for general consistency, causing your bullets to have absurd accuracy. If you're alright with dropping Snapshot Sights, Opening Shot is a great perk as well. Keep your eyes peeled for a good roll of this gun. 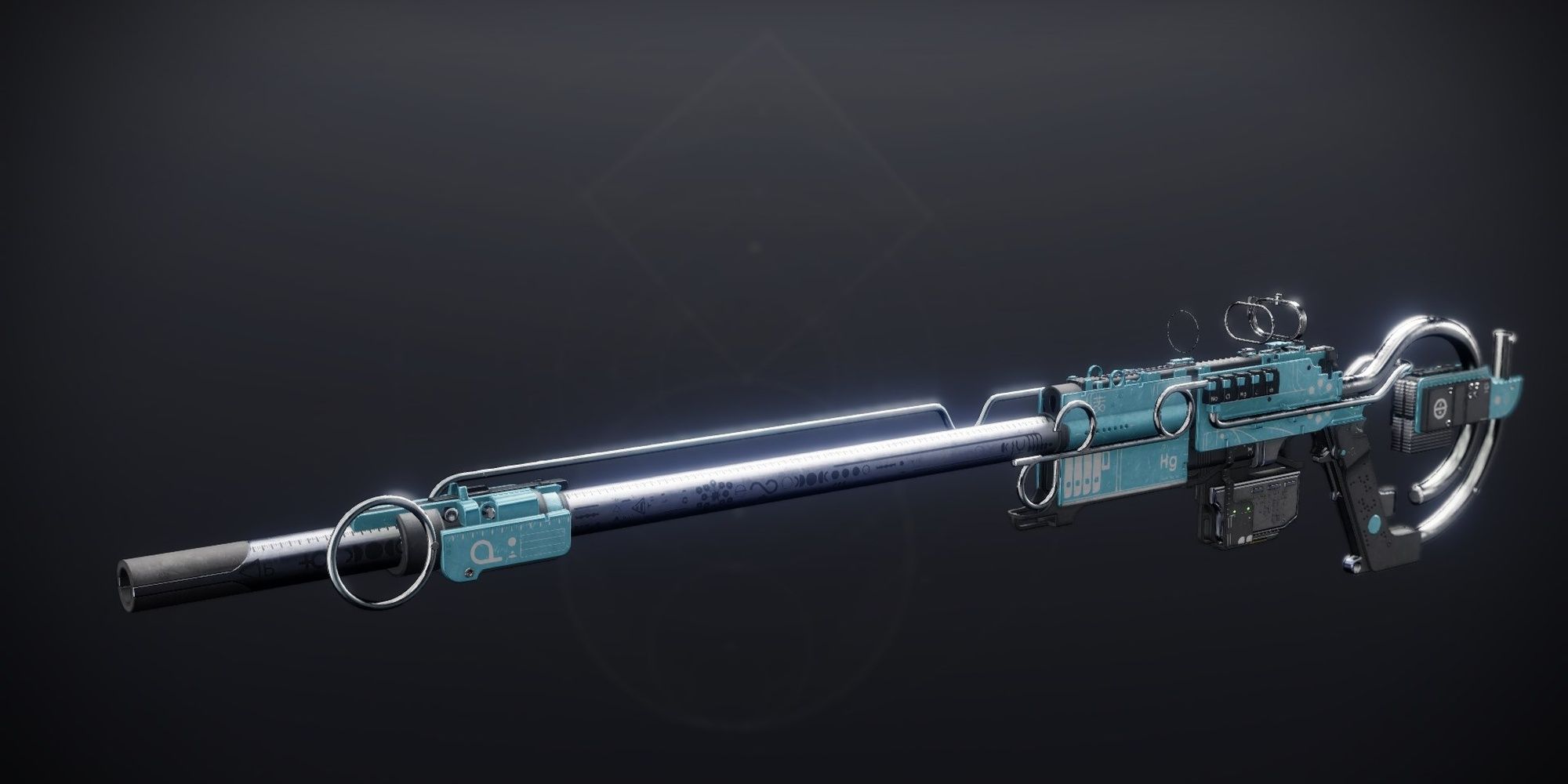 Father's Sins is one of three Sniper Rifles you can craft in Destiny 2. That alone makes Father's Sins worth chasing, yet it has a perk combination that's quite rare. That combination is Under Pressure and Opening Shot. Under Pressure is at full effect most of the time, granting you an immense amount of bonus accuracy that's comparable to Opening Shot. Paired with Opening Shot, it's virtually impossible to miss a bullet. This gun has low zoom, shoots quickly, and can be tuned to your preferences. So long as you're willing to farm The Wellspring activity, Father's Sins is worth chasing. 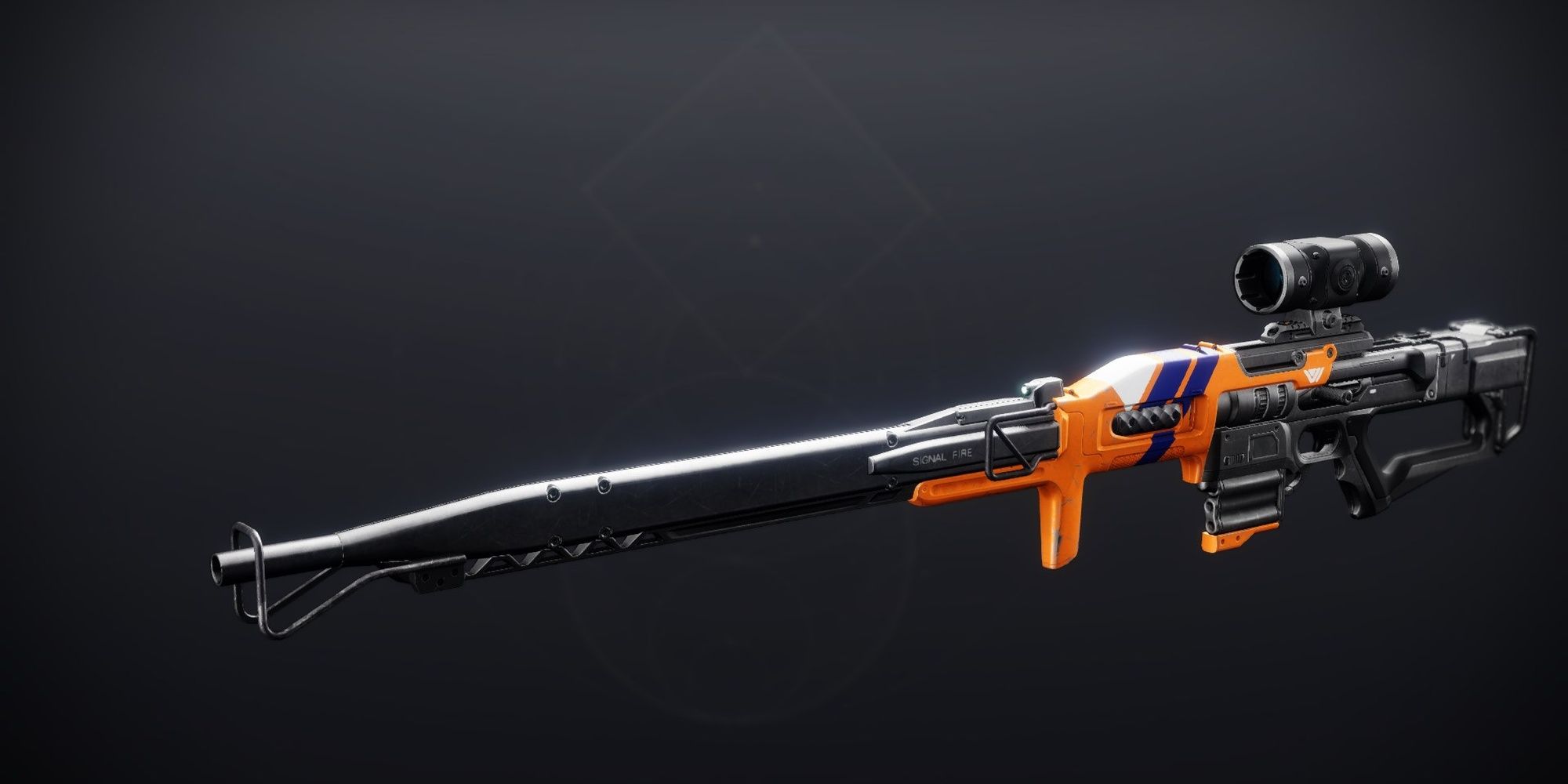 How to obtain: Grasp of Avarice dungeon.

The Grasp of Avarice dungeon brought forward some of Destiny's most iconic weapons, 1000 Yard Stare being no exception. This Sniper Rifle is similar to Beloved when it comes to stats and perks. It has a solid stat package as an Adaptive Frame, can roll with Quickdraw and Snapshot Sights, and resides in the Energy slot.

This weapon is a monster in the right hands, yet the existence of Beloved makes this weapon somewhat tough to recommend. You can either farm the dungeon for a good sniper, or you can farm Opulent Chests to get a god roll Beloved after enough tries. Most players will opt for the latter. If you find yourself disliking Beloved and want something similar, give 1000 Yard Stare a try. 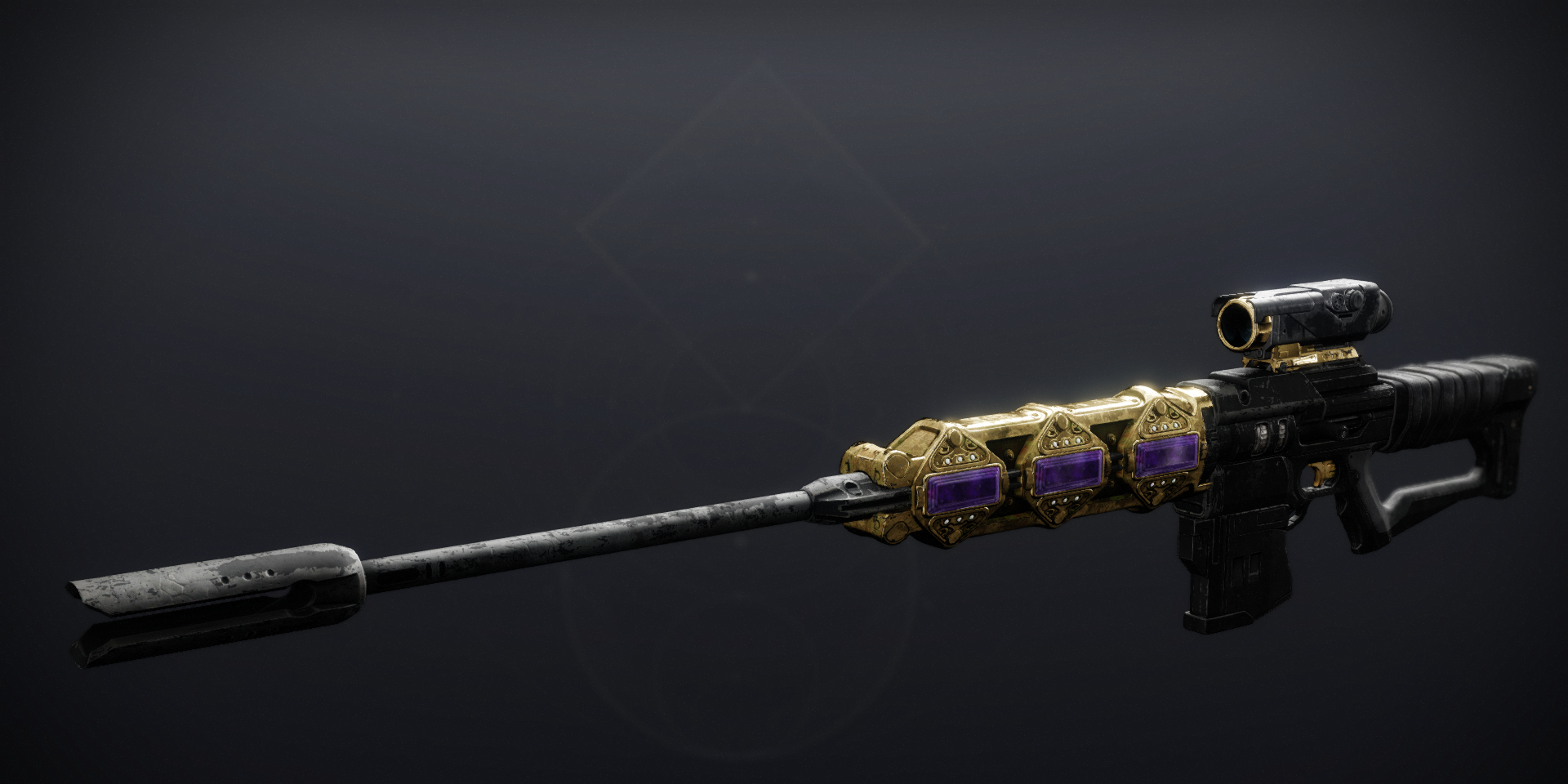 How to obtain: Opulent Chests aboard the Derelict Leviathan (craftable).

Beloved is a reprised Sniper Rifle that originally debuted in Season of Opulence. Back then, most players considered Beloved to be the strongest PvP Sniper Rifle in the game. Plenty of changes have happened since then, so how does Beloved hold up today?

It's still a powerhouse in today's sandbox. Despite the changes to aim assist and ammo economy, Beloved is still one of the most responsive Sniper Rifles in the game. Its classic Quickdraw and Snapshot Sights combo is back, but don't sleep on Surplus and Incandescent. Surplus is absurdly strong if you don't use your abilities often, giving Beloved a ton of flinch resistance and maximum handling. Incandescent makes Beloved a Legendary version of Cloudstrike that applies a ton of pressure onto groups. Best of all, it's craftable. If any roll looks good to you, just make it. 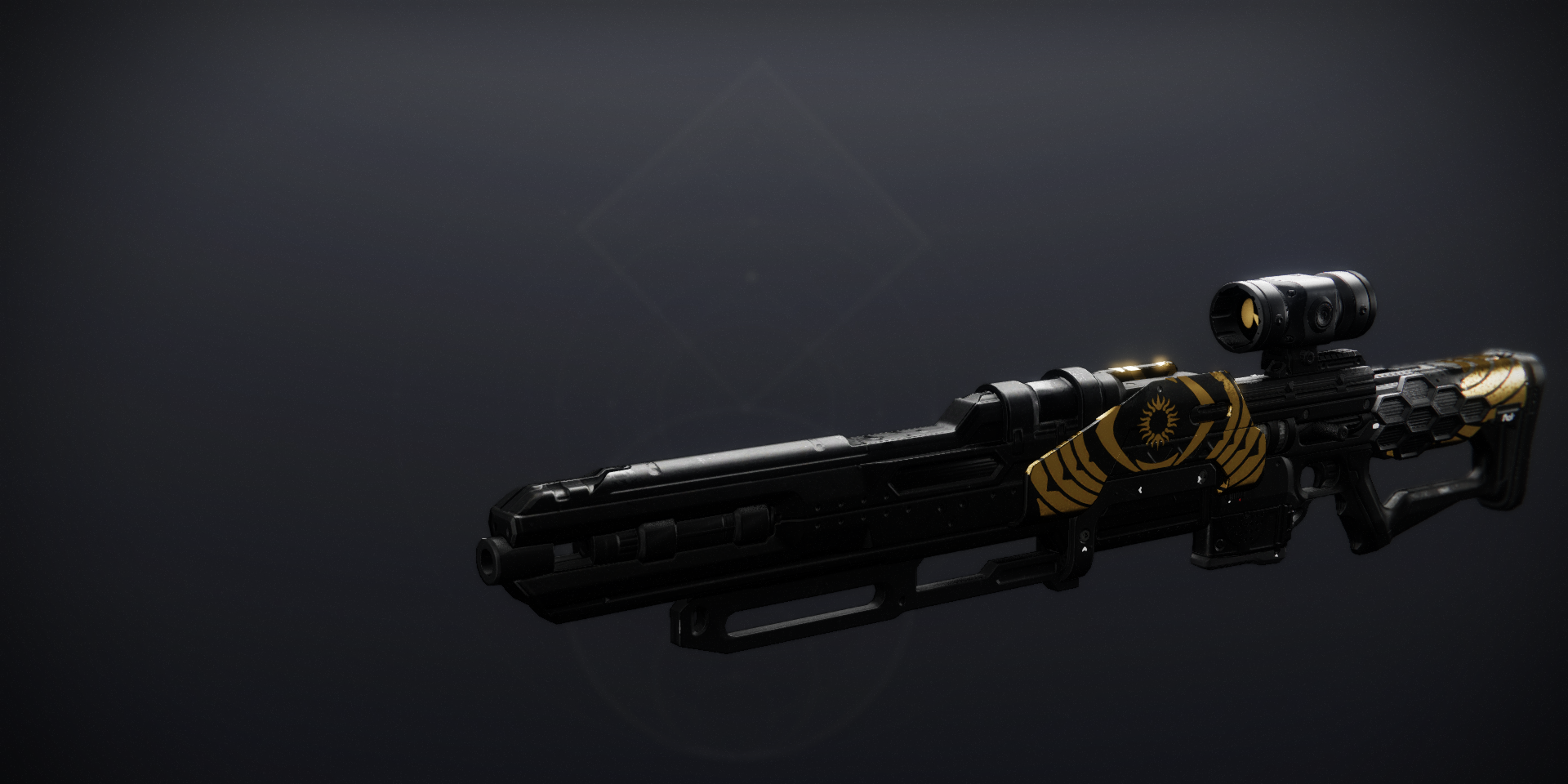 How to obtain: Trials of Osiris matches and Engrams.

Eye of Sol has raised the bar for all Sniper Rifles in Destiny 2. Surplus and Snapshot Sights is a fantastic roll that turns Eye of Sol into an Exotic. The weapon has tons of flinch resistance, capped handling, great reload speed, and aims immediately.

If you don't like Surplus, Moving Target is a great alternative to buff Eye of Sol's aim assist. With an Adept version, you can pair this perk with Adept Targeting to give Eye of Sol 89 aim assist. Throw on a targeting mod, and you have the most forgiving 90 RPM Sniper Rifle in the game.