It’s been a good time to be a Dragon Ball fan recently. Dragon Ball Super rekindled many fans’ enthusiasm for the series, culminating in the film Dragon Ball Super: Broly making over $100,000,000 at the box office in the past year. On the video game side, the Dragon Ball Xenoverse games let fans dig deeper into the wider world of the series, while Dragon Ball FighterZ finally gave fans a deep, rewarding fighting game using its iconic characters.

With all these spinoffs and continuations, it’s easy to forget how long it’s been since we got a proper retelling of the storyline of Dragon Ball Z. That’s what Dragon Ball Z: Kakarot aims to do. “There are a lot of fans that have kind of jumped onto the ship [recently],” says Kakarot director Ryosuke Hara. “So I think this game will be a very good entry point for that new community, if you will, and they’ll get to experience Goku’s life and through this game.”

After playing a short demo of Kakarot, its storytelling is what stood out, both in how Bandai Namco and developer Cyberconnect2 are planning to stick by the established plotline and how they’re planning to deviate. The fighting that ties it all together, however, didn’t shine through. 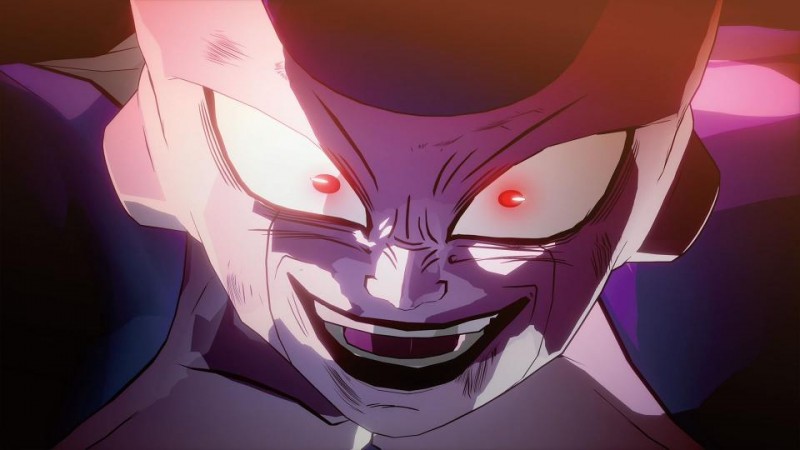 Kakarot is an open-world action RPG, something fans have been craving for a while. I’ve always wanted to see more of Akira Toriyama’s world than Dragon Ball has shown; it’s a world ripe for exploration, even outside the confines of a shonen fighting series where plot takes a backseat to flashy, over-the-top fights. Kakarot of course stays within those confines, but wants to give us a little more world-building than the series has given us in the past.

My demo begins with a clear objective: Take on Radditz, the first baddie of DBZ’s Saiyan Saga. Although my map shows me I can immediately fly on over to take him on, I’ve got 30 minutes to explore the surrounding area, and it’s not the barren grassland you might remember from the anime: it’s much more crowded with tiny settlements, collectibles, and enemies, with various points of interest dotted on my map.

Kakarot is an attempt to further delve into the world of Dragon Ball Z through Goku’s eyes, which is partially the reason “Kakarot,” Goku’s other name (in the same way Kal-El is Clark Kent’s other name) is the subtitle. “We wanted to shine the spotlight of course not only on the battles, but what happens in between the battles, and what Goku’s day to day life is, so we needed a name that really was representative of this idea and concept of Goku,” says producer Masayuki Hirano. 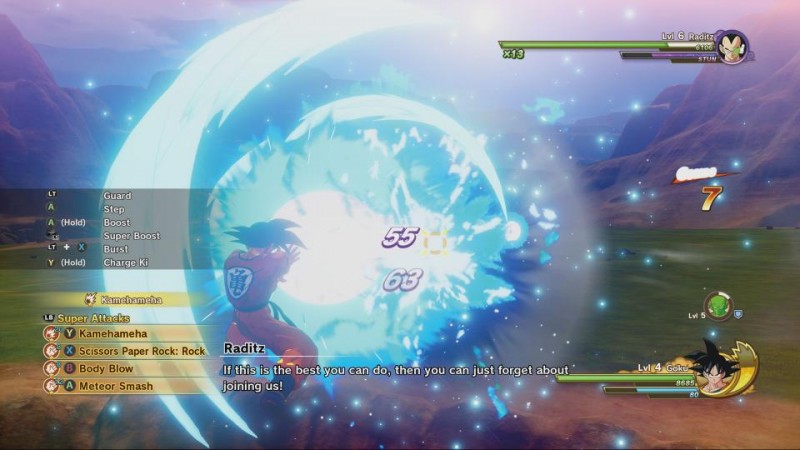 The other reason is that the name is what Kakarot represents in the series itself. Radditz calling Goku this name, and revelation that comes with it (Goku being a Saiyan) is part of a shift in direction that Z begins to take that separates it from the early Dragon Ball series. “It really kind of cracks the narrative and the possibilities of the Dragon Ball universe wide open,” Hirano says. “So it’s the genesis of Dragon Ball Z, the first time it really opened up that universe.”

I can see what they’re going for as I approach the first dot on my map. Here I find Nam, a character from the original Dragon Ball anime. After a short bit of catching up, he sends me on an escalating trade quest, in which I have to trade one item for another until I’m able to get him something of value for his village. Later in my demo I encounter another Dragon Ball character, Android 8, who again sends me on a similar quest after a short exchange.

Seeing these oft-forgotten characters is a fun surprise, but I leave my talks with them disappointed. The conversations themselves are pretty short and mostly perfunctory, and I wish there were more to them. I’m not asking for a Mass Effect-style dialogue tree or quest line, but I would have liked to see more interesting situations or sequences at play. For all its focus on fighting, FighterZ managed to wring some fun new scenes out of established characters, and I wish more of that showed up here. 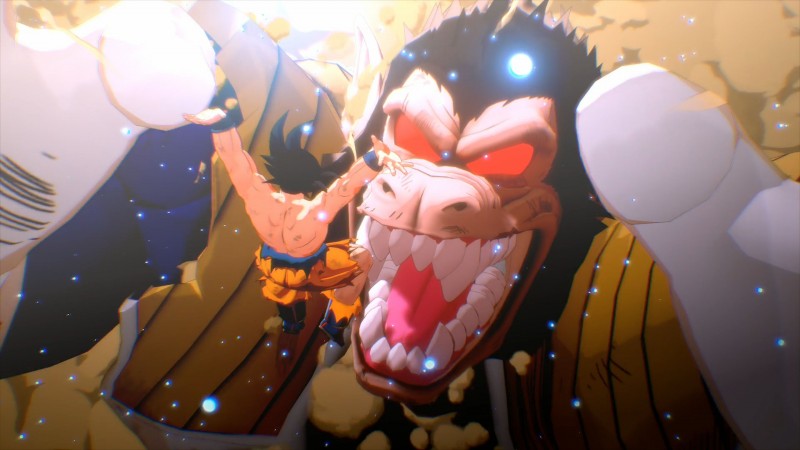 For his part, Hirano is hopeful that they’ve been able to portray things other than the series’ bombastic fights, and that this aspect will set Kakarot apart from other Dragon Ball games. “I think Dragon Ball has a very unique sense of comedy,” he says, pointing to one of his favorite quiet moments early on in the series: The episode in which Goku, having died at Radditz’ hand, needs to make King Kai laugh in order to qualify for training in the afterlife. “A lot of those little moments in between the battles, I think, especially the comedic moments for me were really fun, and the fact that we were able to portray this in a game I believe hasn’t really been done before.”

As I fly around on the Nimbus cloud (you can do barrel-rolls to collect floating items along the way) with Piccolo at my side, to complete these quests for Nam and Eighter, I’m ambushed by enemies resembling the Pirate Robot from the Red Ribbon saga of Dragon Ball. These encounters are what you’ve come to expect from action-oriented Dragon Ball games: From a behind-the-back perspective, I can fly around, shoot ki blasts, or run up and punch these robots, who don’t take a lot of effort to destroy. I can block attacks or have Piccolo help me out, but I don’t really have to engage with a lot of the systems against these enemies; I stick to just mashing the attack button I breeze through it.

I take on several of these encounters in my demo, and even by the end of my short time with Kakarot they lose their luster. These fights are hard to flee from, too, which made them more of a drag than anything else. Sprinkinling in random fights throughout the Dragon Ball Z sagas is what I’d expect from an RPG take on the series, but I wish the fights themselves were more engaging. Right now, they feel like a way to pad out my time in the demo before I take on Radditz.

My fight against Radditz himself, however is more engaging than the several I had against pirate robots; he doesn’t seem too bothered by my attacks, but I have to think a bit more critically about how I approach him. As I lay into him, he starts glowing red, which is my sign to back away before he unleashes his own attack against me. It’s a spin move I have to dodge out of the way of, and dodging it again leaves him open to more damage. He also has a beam attack I need to duck and move around, and it provides a decent challenge.

These attacks get a little more difficult to dodge during his second phase, which is punctuated by a cutscene depicting a scene many fans already know well. As Piccolo charges up his Special Beam Cannon attack, Goku grabs hold of Radditz’s tail, paralyzing him. After Radditz fools the incredibly gullible Goku into letting him go by promising to turn a new leaf, I have to fight Radditz again in order to pin him down. His spin move now has two follow-up attacks, and his beams move more quickly, and have more blasts surrounding them, making them harder to dodge. It’s a good challenge, but that’s partially because Radditz has 12 health bars, which drag out the fight long after I’ve got his patterns down. Still, it’s a better implementation of combat than the random battles before it, and I hope future fights are like this as well.

My demo ends right after this fight, which raises some questions: With all the emphasis on depicting events we don’t typically see and Dragon Ball video games and sprinkling in some new ones, what’s the scope of Kakarot like? Will it chronicle all of Dragon Ball Z? Unfortunately, Hirano is keeping tight-lipped, and says he can’t reveal exactly where the cutoff will be. “But with that in mind, I think the fans will not be disappointed,” he tells me. “I will leave it at that.”

Dragon Ball Z: Kakarot is scheduled to release sometime next year on PS4, Xbox One, and PC.