Things can never stay simple, can they? The fifth level of Escape Academy turns up the heat and throws you into a high-pressure situation yet again – this time you're not contending with the threat of drowning or worse, being caught tagging a monument by the headmaster.

No, this time you're running support on a daring rescue mission. The headmaster has recruited you to help her free Eel, previously thought to be dead, from a prison ship. Luckily, you can do all this from the academy itself – there are no field trips in this game. Don't get complacent, though. There are lots of things to figure out. 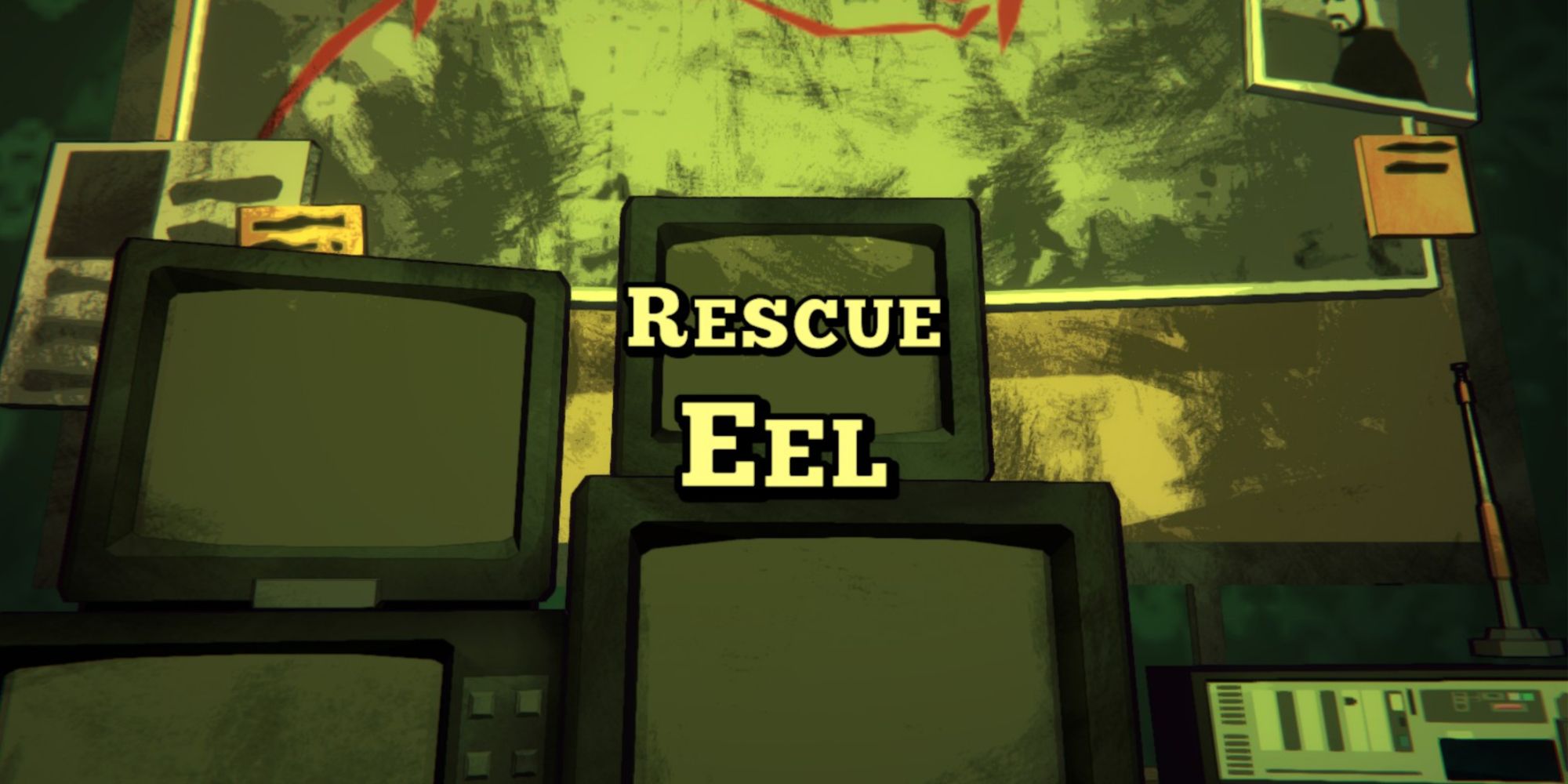 How To Communicate With The Headmaster 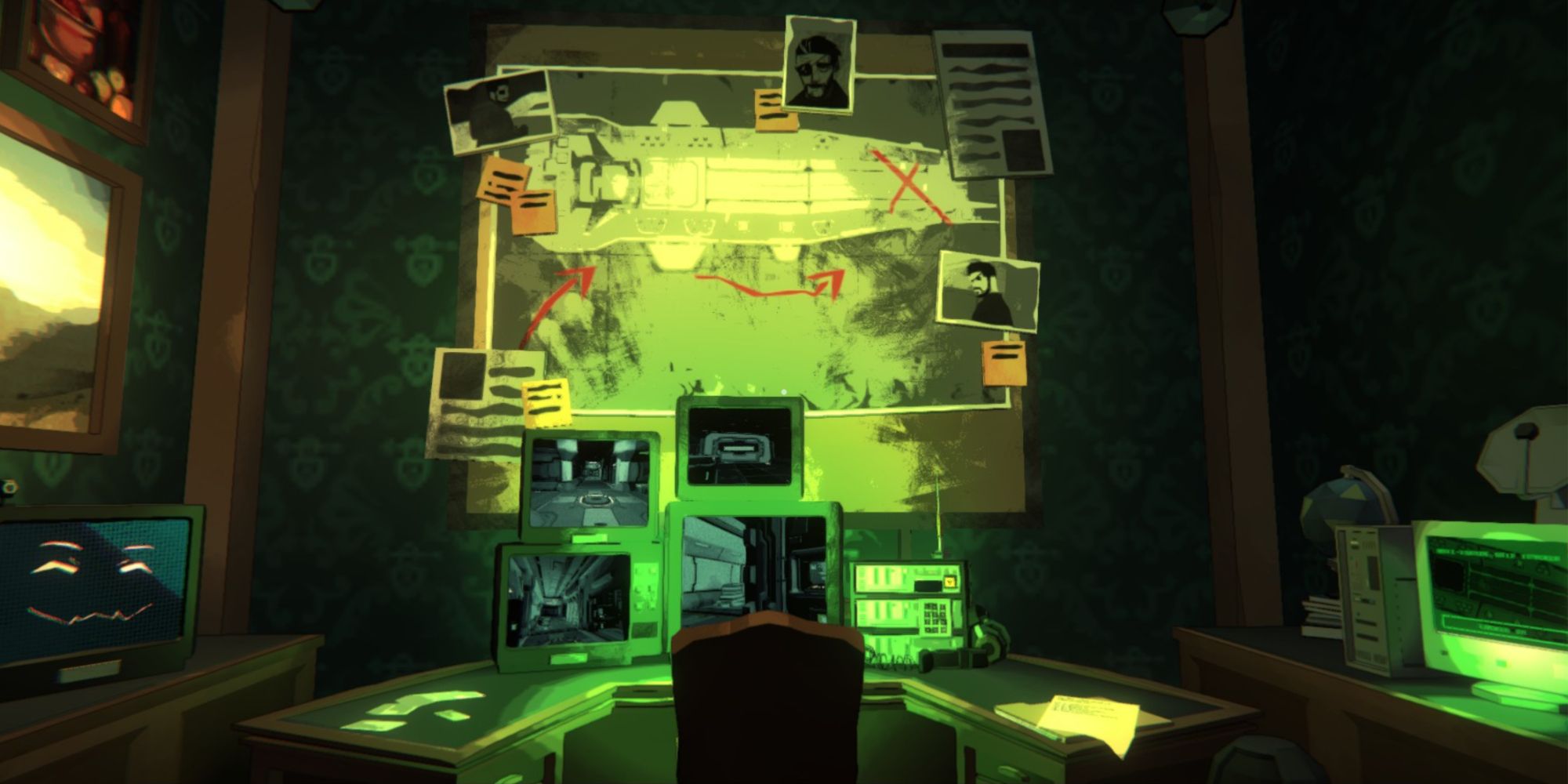 As ever, the first thing you should do in this level is take stock of your surroundings. Take note of the following: 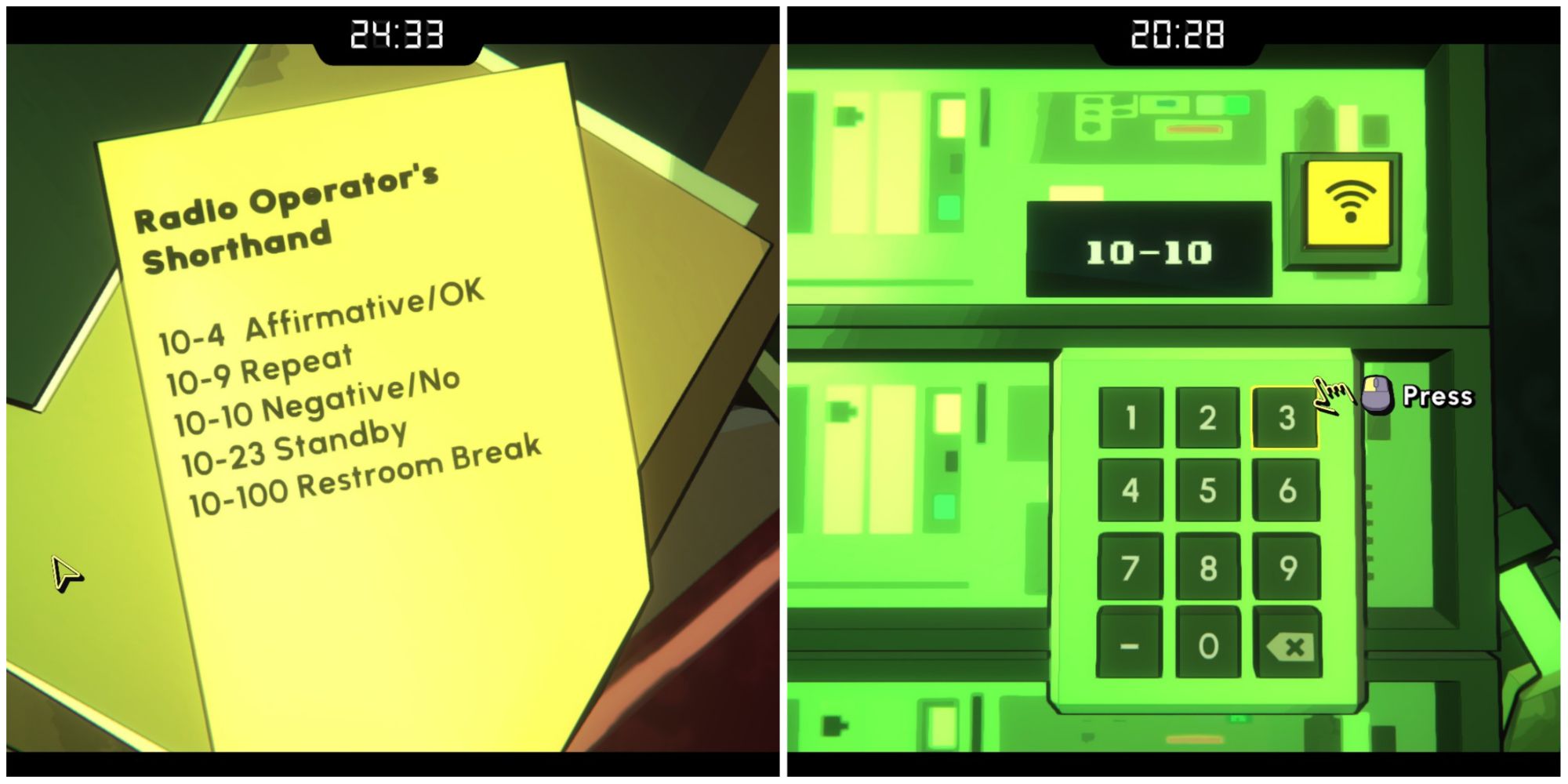 Your first task is to signal to the Headmaster that you can hear her. Examine the clipboard to the right of the radio to learn the codes that you'll be using to communicate. Enter the code for 'affirmative' – 10-4 – into the keypad on the device.

You do not need to include the dash, despite there being a dash button on the keypad. Keying in '104' will work just fine.

How To Work Out The Turret's Serial Number 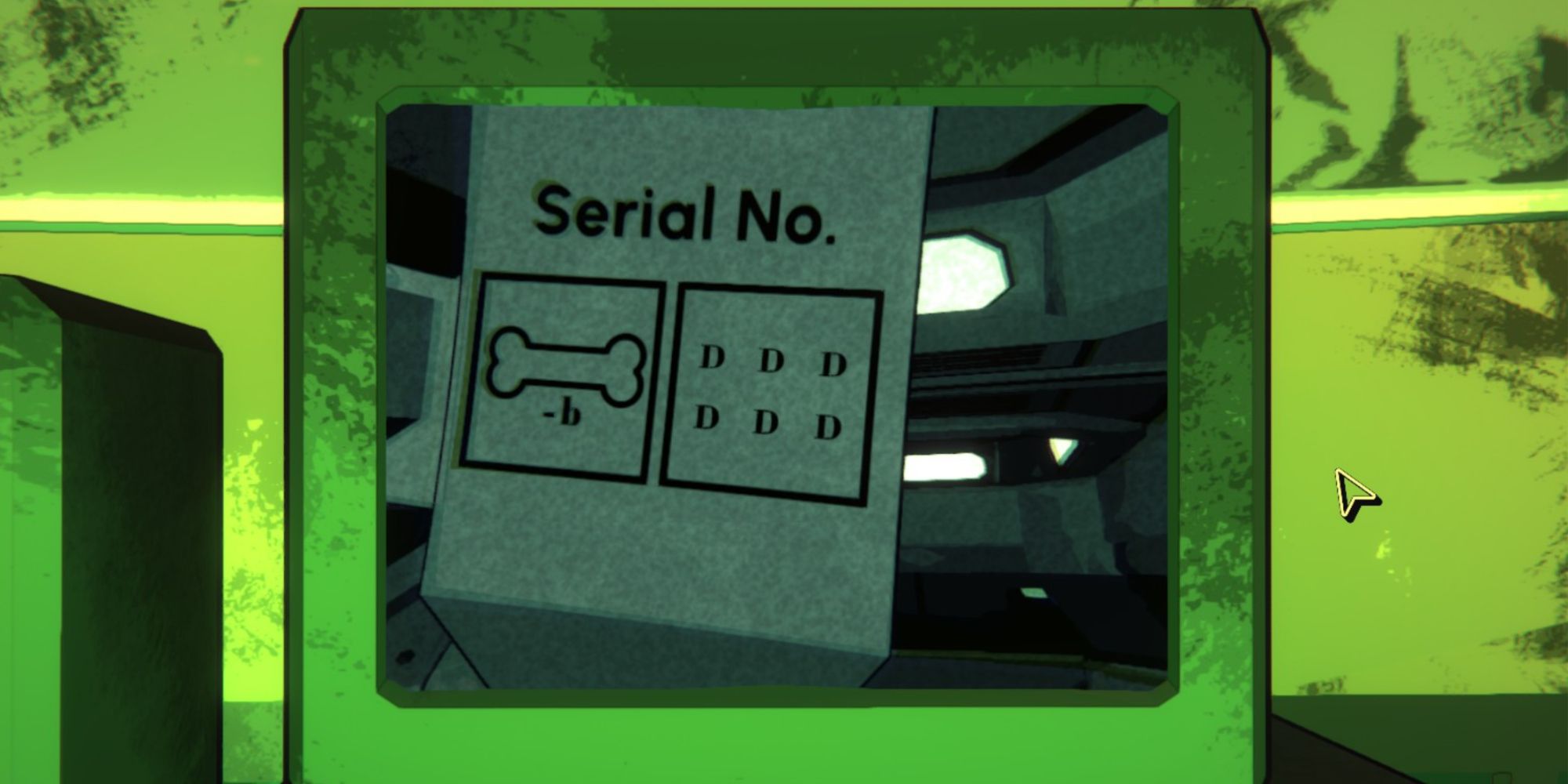 Very soon after, the Headmaster will come under fire from turrets – she's confident that she can disable the turrets, but she needs the serial number to do so.

Examine the monitors and zoom in on the one showing the turret's serial number – it's a puzzle, of course it's a puzzle. The first part of the serial number is a bone without the 'b' – that is, of course, one. The second part only really works if you 'say what you see.' There are six 'D's – say this out loud and it sounds just close enough to 'sixty' to work as a solution.

How To Find A Computer Terminal 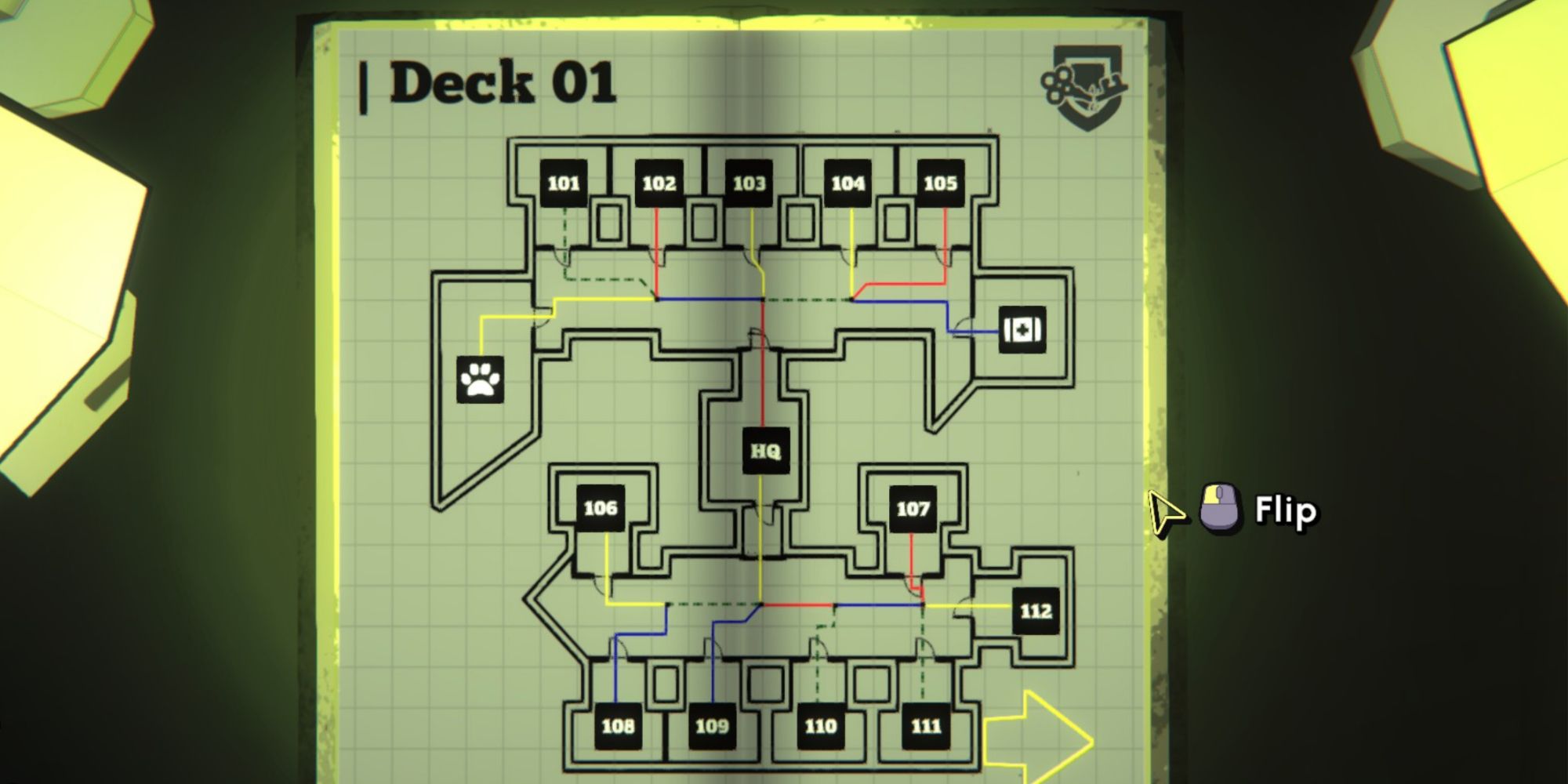 The Headmaster now needs to find a computer terminal. She asks you outright if there is a computer terminal on the first deck – head to the prison ship blueprints to find out. You can flip the pages using the yellow arrows on the bottom of the page.

The first deck has no computer terminal, so you need to head back to the radio and respond in the negative: 10-10.

The Headmaster will then ask you to tell her which deck the terminal is actually on. Flip to the next page to find that it's on Deck 02. Enter '02' into the radio keypad.

How To Find The Ship's New Coordinates 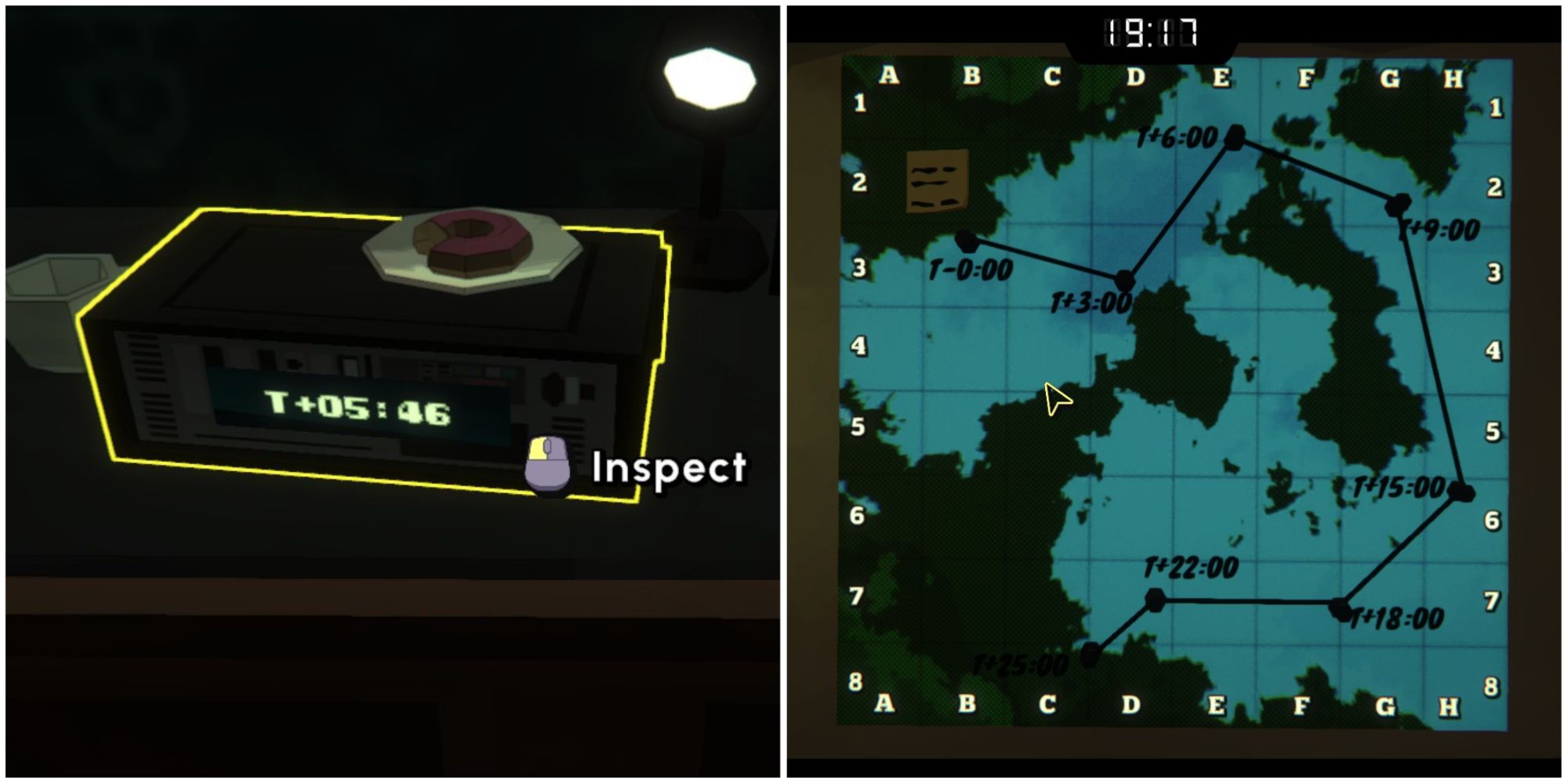 Immediately after telling the Headmaster where to find the computer terminal, you'll lose your connection to the ship. Quanty, the computer who's helping you on your mission, will require you to update it with the new coordinates.

To do this, examine the map on the wall to your right. It'll show you the prison ship's course trajectory. The numbers on the map indicate where the ship will be at any given time, and you can check the time elapsed on the mission timer, which is also on your right. 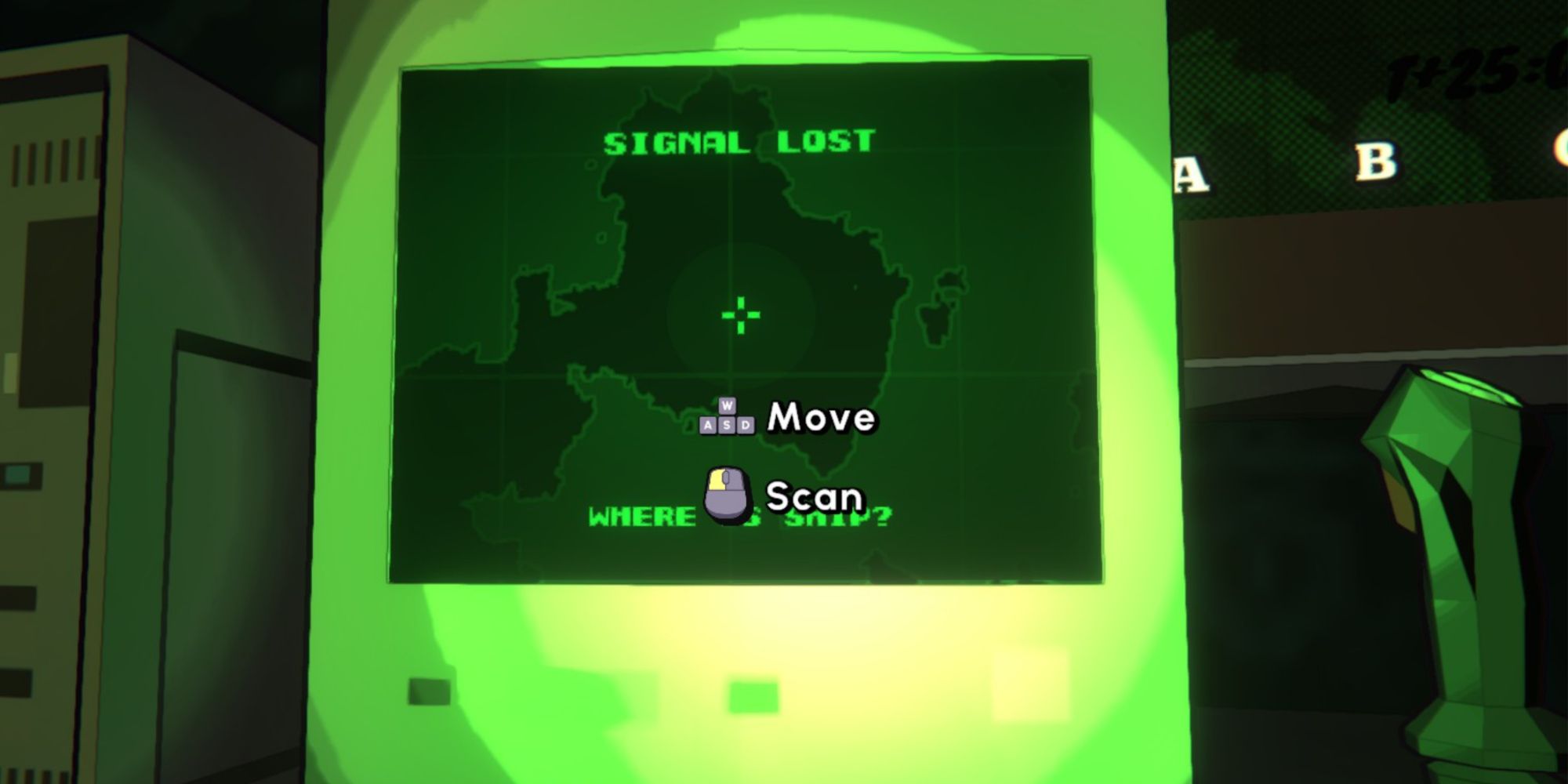 Once you've figured out roughly where the ship will be based on the trajectory and the mission timer, interact with the console on the right. Use the movement buttons to move the viewfinder around the map – use the shapes of the islands on the wall map as a reference – and click when you're close to the suspected point.

You do not have to super-precise, as long as you're in roughly the right area, Quanty will be able to track the prison ship again.

The Headmaster will ask you to affirm that you're back in contact – enter 10-4 into the keypad again. She'll then fax over some information.

How To Locate Eel's Cell 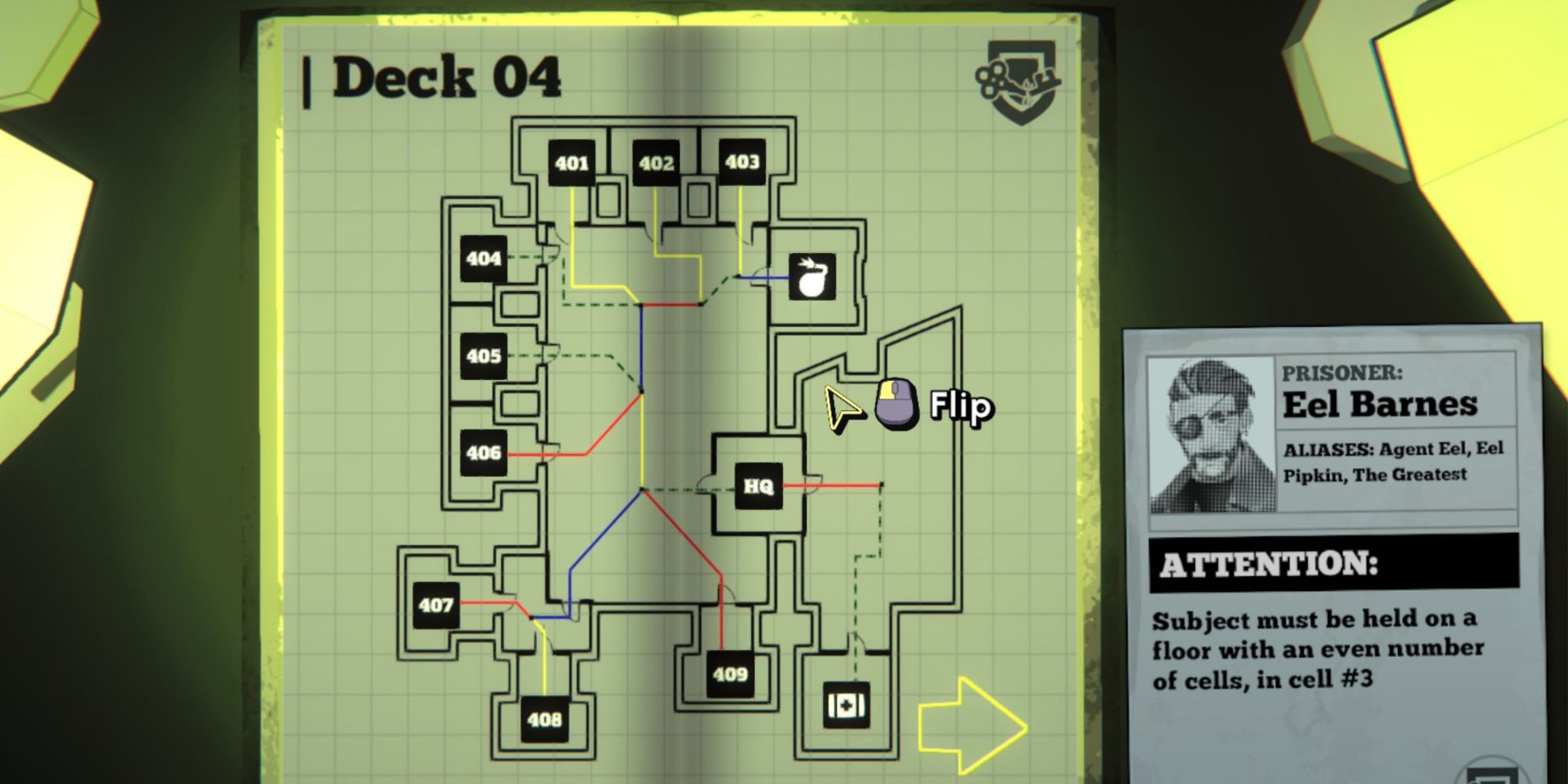 Pick up the three sheets of Prison Data from the fax machine. They will give you three pieces of information that will help you narrow down where Eel is being held:

How To Open Eel's Cell 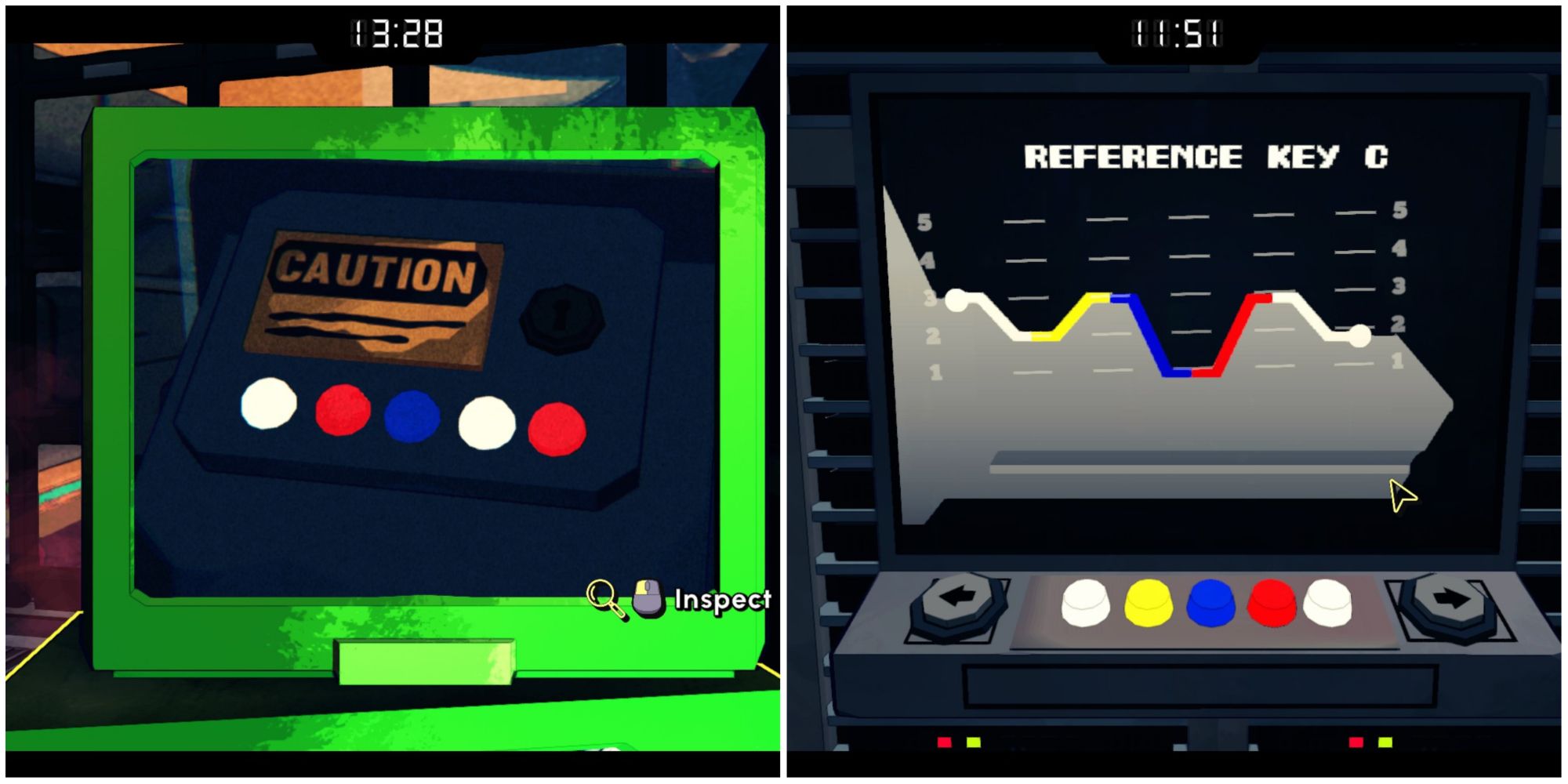 This is probably the hardest puzzle you'll have encountered yet, as it relies on you figuring out something that the game gives you few hints about – unless you use the hint system, that is. But why use that when you have us?

Every cell key is made up of five colored lights. These lights dictate the shape of the key, either raising it or lowering it as it moves right. The trick to this puzzle is knowing what each colored light does.

You can use the reference keys to work this out, as well as the fact that every key starts at level three. If you check the security feeds, you can see that we already know what Eel's cell's colored light combination: White, Red, Blue, White, Red.

Assuming that Eel's key also starts at three, we know that this means his key looks like this:

This means Eel's cell key, numerically, is 24213 – enter this into the keypad and unlock the cell door. With that tiny moment of joy out of the way, the power levels will surge and you'll be plunged into darkness.

How To Bring The Power Back 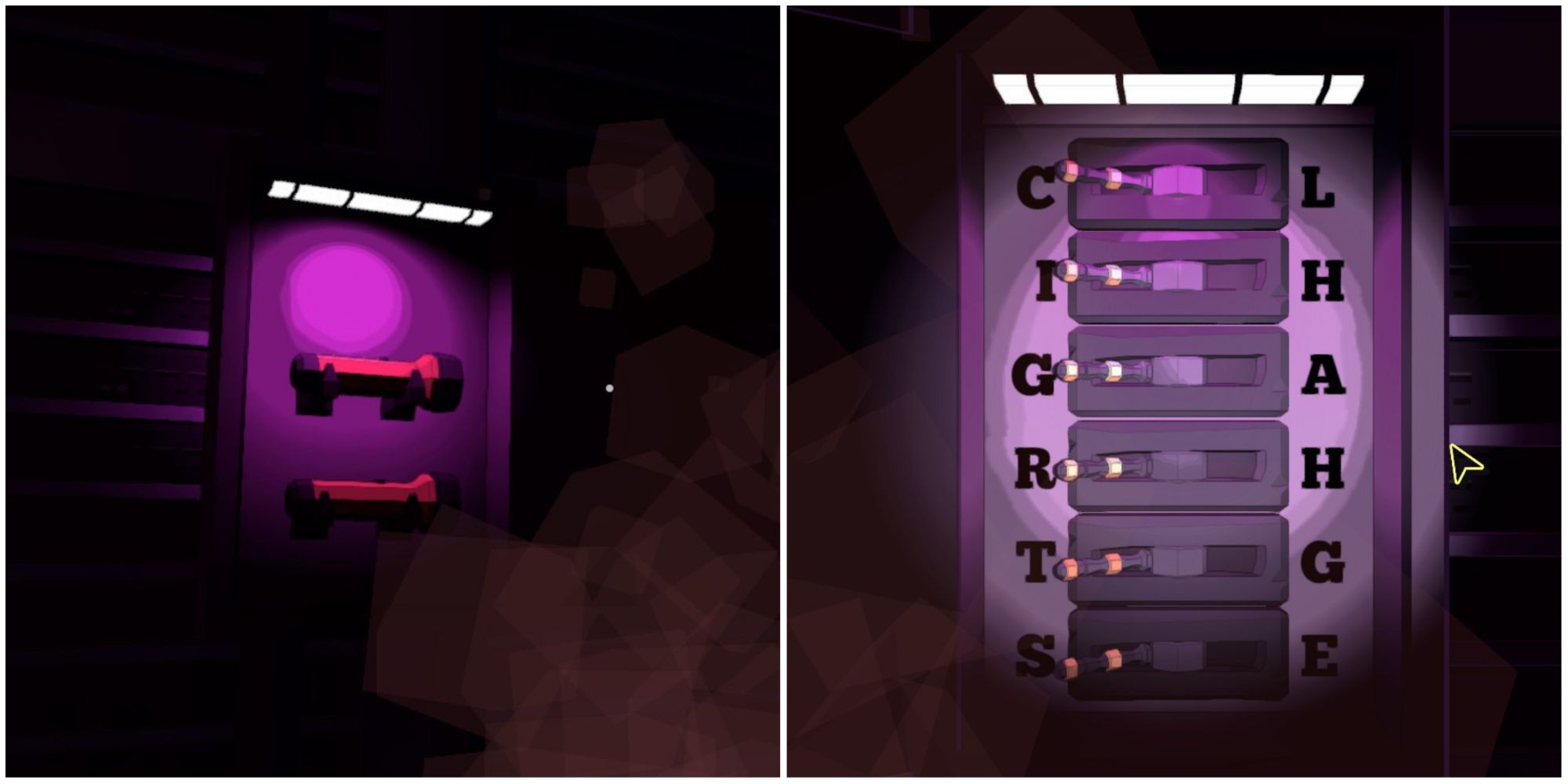 Check the box on the wall to your left to pick up a UV Flashlight. You'll automatically use this once you've picked it up, and you can use it to read the white signs dotted around the room. There is a fusebox in the opposite corner of the room with six lettered switches – you must use the rules found around the room to figure out how the switches should be arranged.

Arrange the switches as follows:

With that done, the lights come back on and it's time to solve one final puzzle!

How To Deal With The Turrets 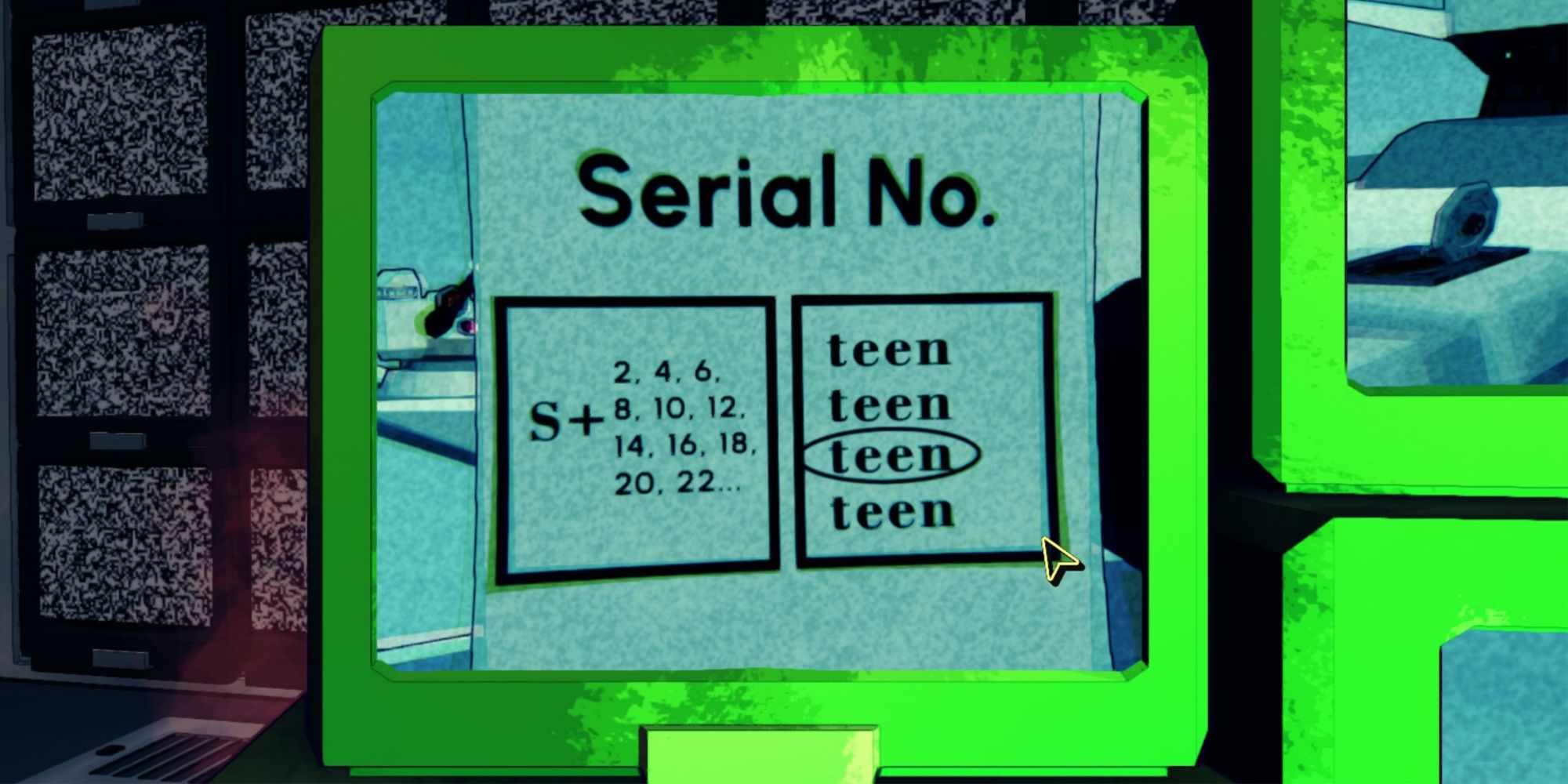 There are only two more things to do before the level ends. The first is another serial number puzzle. Again, it's a number split into two hints:

The serial number, in this case, is 7-13. Relay that to the Headmaster with the keypad. 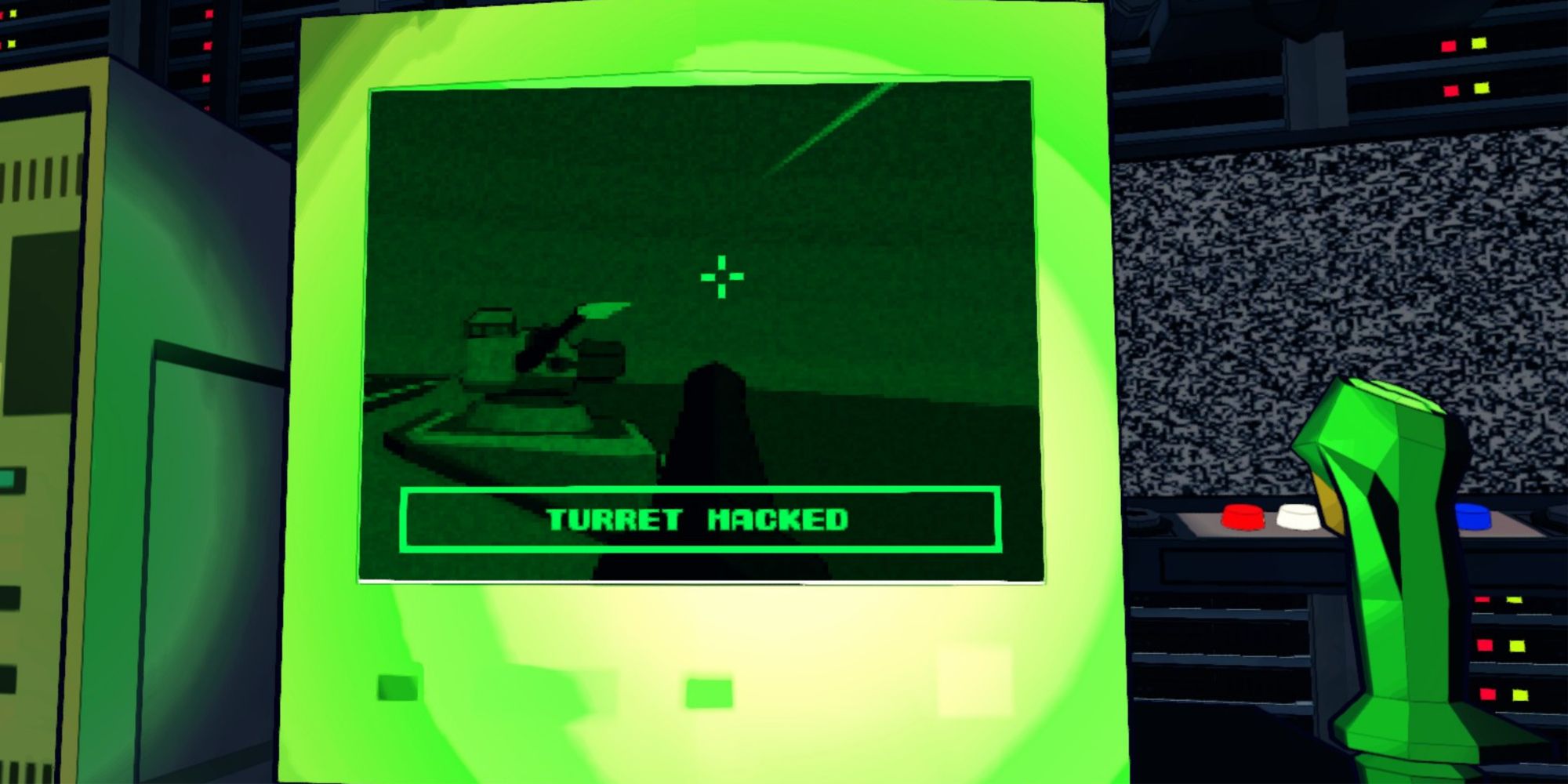 Now it's time to take direct control of a turret using the same console you used to find the prison ship's location earlier. Move the viewfinder around and aim at the three turrets, clicking to fire and destroy them. Once all three turrets are dealt with, the level is over!