When presented with a map of the world from 1444, it's easy to see that things look quite different from today. Spain doesn't exist, the Ottomans are a major world power, and Japan is composed of warring states. But there are many things you can do to shape the world toward the one we know in the 21st century.

From a 1444 start in Paradox Interactive's magnum opus, you can choose several nations that may start off small but go on to bigger and better things as the years go by. Whether through warfare, diplomacy, or luck, you have plenty of choices to rise through the ranks of the world and become a Great Power. 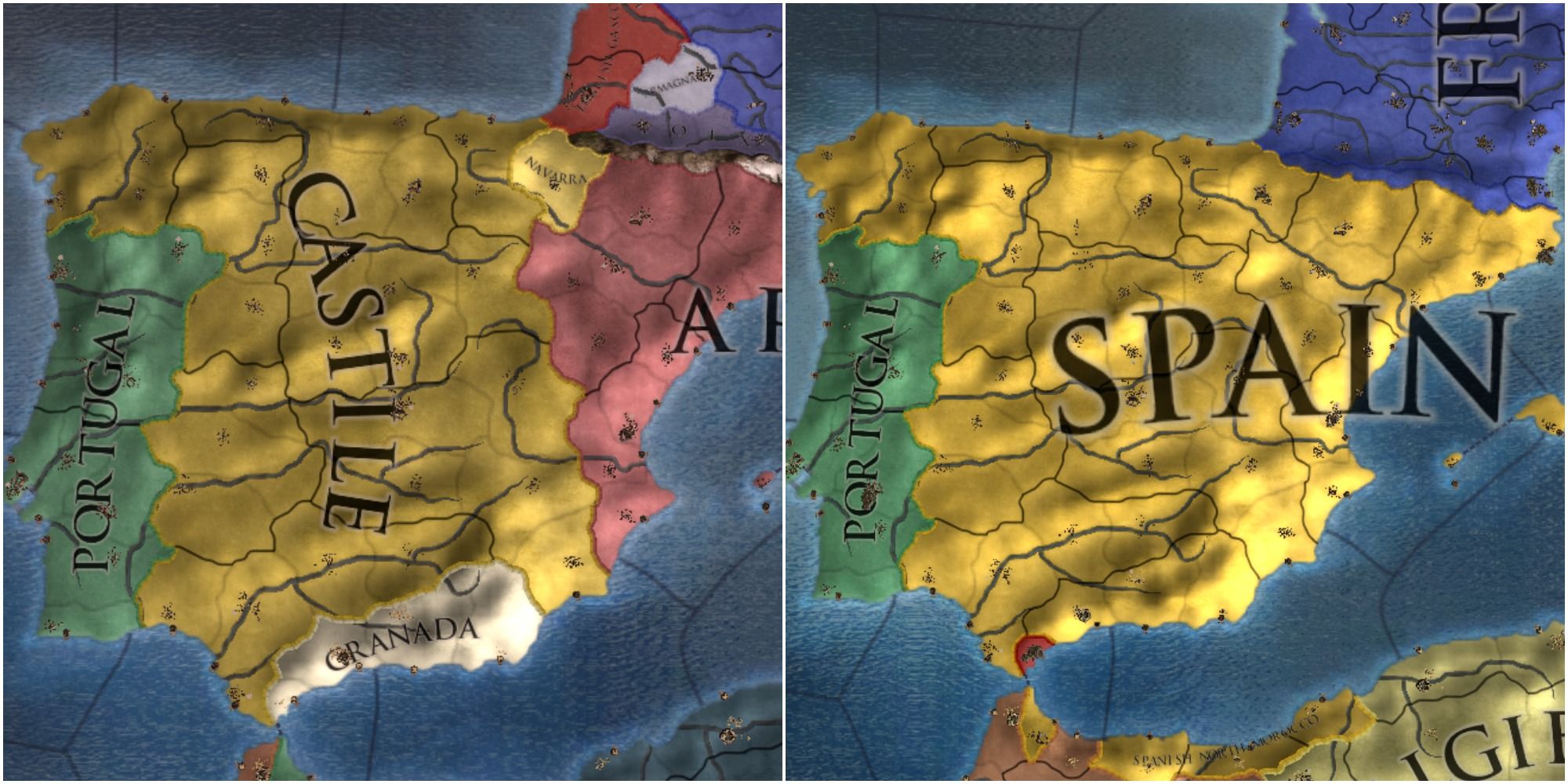 If you're looking for a greater challenge, it's possible to form Spain with Aragon, but Castile is the easiest way to do it. In fact, Castile is one of the most popular choices for a 1444 start, and it's also a nation that the game itself recommends for beginners. One reason this is so is that Castile has few internal problems, has a very clear mission tree, and there are engaging gameplay options from the get-go.

Since you shouldn't be spending too much time playing whack-a-mole with rebels, you can get started with The Reconquista almost as soon as the game begins. Through the Iberian Wedding event, which is pretty easy to trigger, Castile can also ultimately take control of neighboring Aragon, which means you could avoid taking any needless military risks and focus on building your economy to become an imperial power. Colonialism is, after all, where Spain really shines, as you'll be one of the first European nations to make it across the pond. 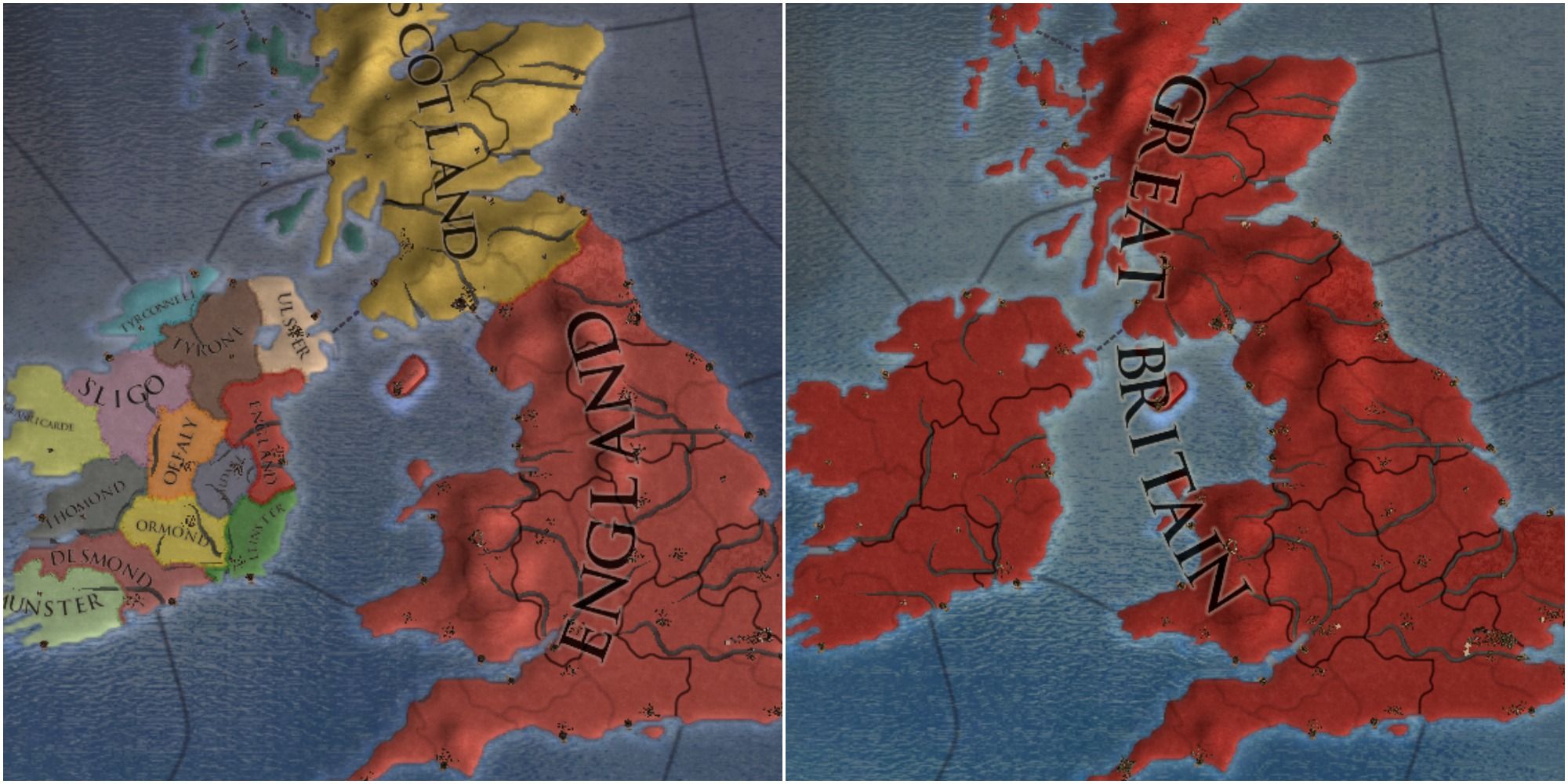 There's a convoluted way you can form Great Britain by starting as Scotland, conquering England, reforming England, and then forming Great Britain with Irish ideas, but England is the more straightforward choice. Right off the bat, England is the dominant power in the English Channel trade node, which is the best trade node in the game. And you'll continue to get more power in that node by vassalizing and conquering Ireland. If you can get around France's guarantee of independence toward Scotland (which you should be able to do with your incredible navy), taking Scotland will make you even more powerful.

You also start with provinces in France, so if you want to try and extend the Hundred Years' War, you have that option to you as well. But even if you lose your foothold in mainland Europe, the united British Isles alone offer the England player extraordinary power within a game of EU4.

8 Holland To The Netherlands 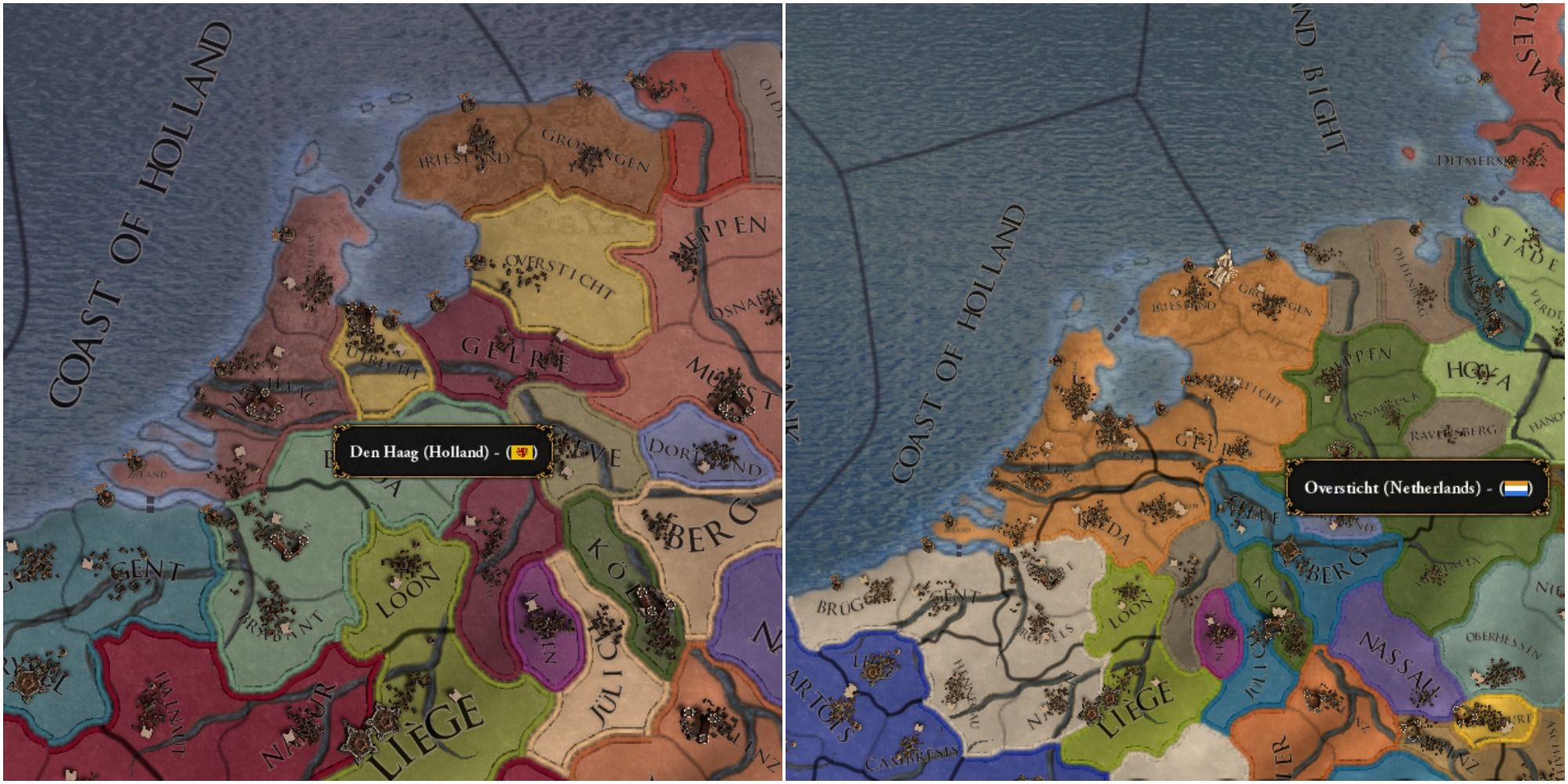 A proper Holland game is best done with the Conquest of Paradise DLC, since that's the additional content you'll need to garner support for your independence and break free from your personal union with Burgundy. And if you manage to form them, they could be a major force.

The Dutch start with an additional Merchant, increased trade range, 15 percent extra trade efficiency, and decreased costs for developing their provinces. Militarily, Dutch forces have ten percent extra fire ability. The Netherlands' unique Dutch Republic government also provides an additional 10 percent efficiency bonus to trade, and a bonus to the damage heavy ships can dish out. If you manage to form the Netherlands and build up your navy to rival Great Britain, that could be your ticket to becoming a global world power. 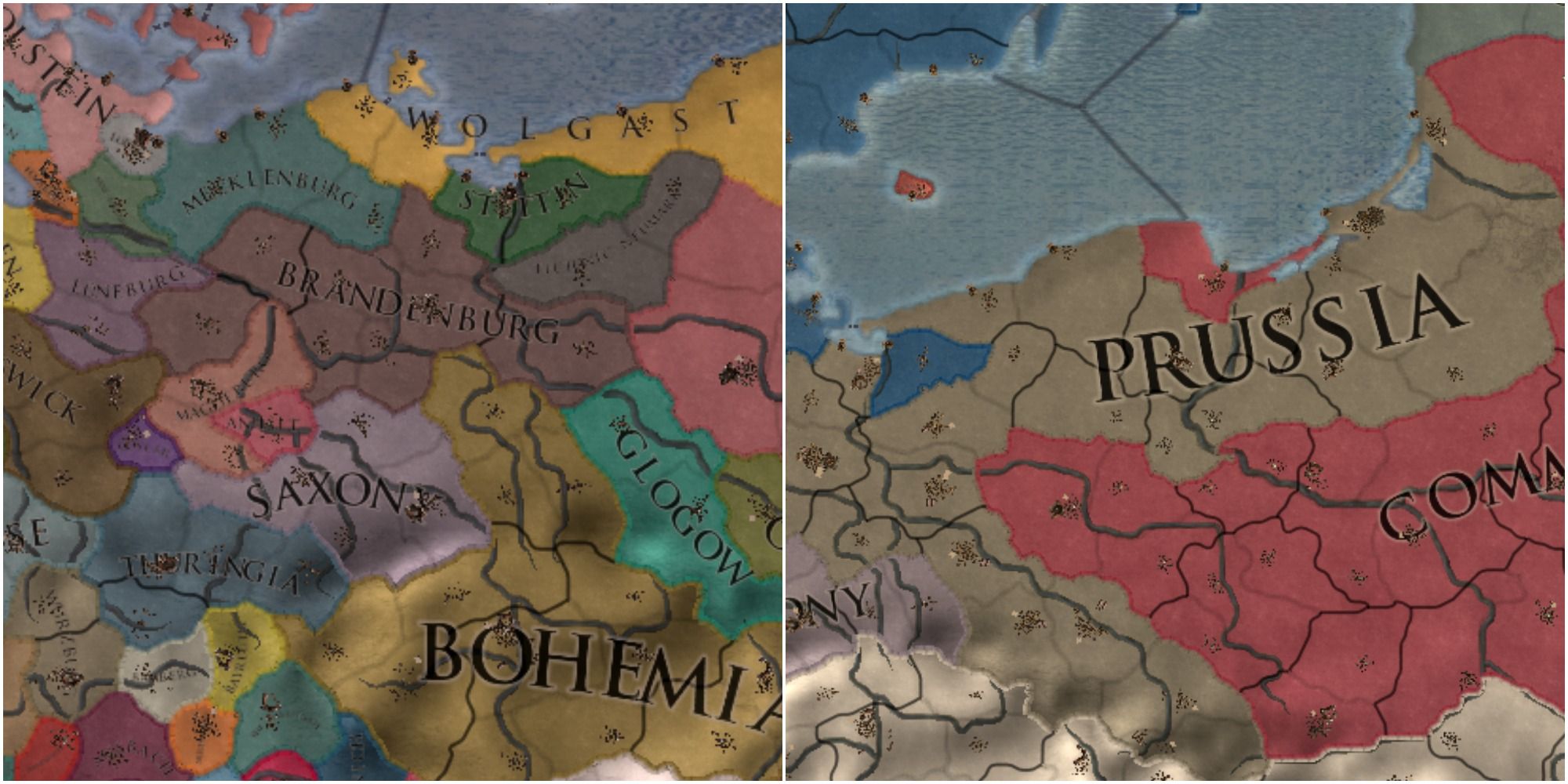 Prussia is arguably the best military nation in the entire game. It's a nice reward too, because the first few decades for the Brandenburg player can be a bit rough going. The early struggles are worth it, however.

In addition to Prussia's potent military ideas, reforms that are available to Prussia as a monarchy or republic contain militarization (with the Rights of Man DLC), which gives your army bonuses the more militarized you get. 50 military power gets you ten militarization, and at 100, you'll receive even more boons to your army. The Teutonic Order, or any nation that has Prussian, Saxon, or Pomeranian culture, can also form Prussia. 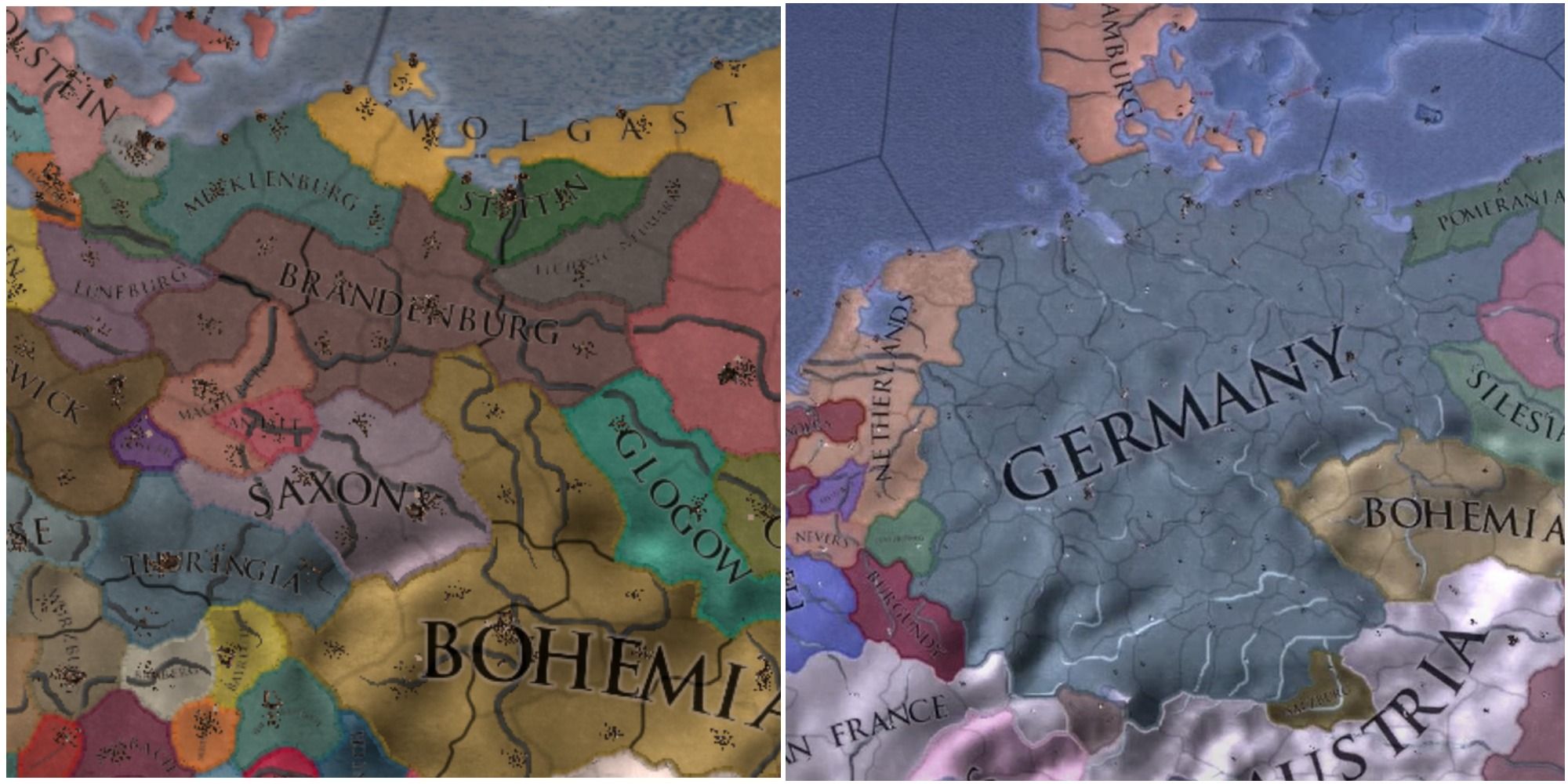 Prussia is often the goal for Brandenburg, but you can take your game one step further and try to form Germany. While perhaps not as militarily imposing as Prussia, Germany can still be a force to be reckoned with thanks to their national ideas that grant you increased discipline, trade efficiency, less unrest, more goods produced, and an additional diplomatic relation, among other benefits.

You can't form Germany directly from Brandenburg. A good Germany game necessitates forming Prussia as quickly as possible. If you want to go a different route, you can begin your game as Brunswick. 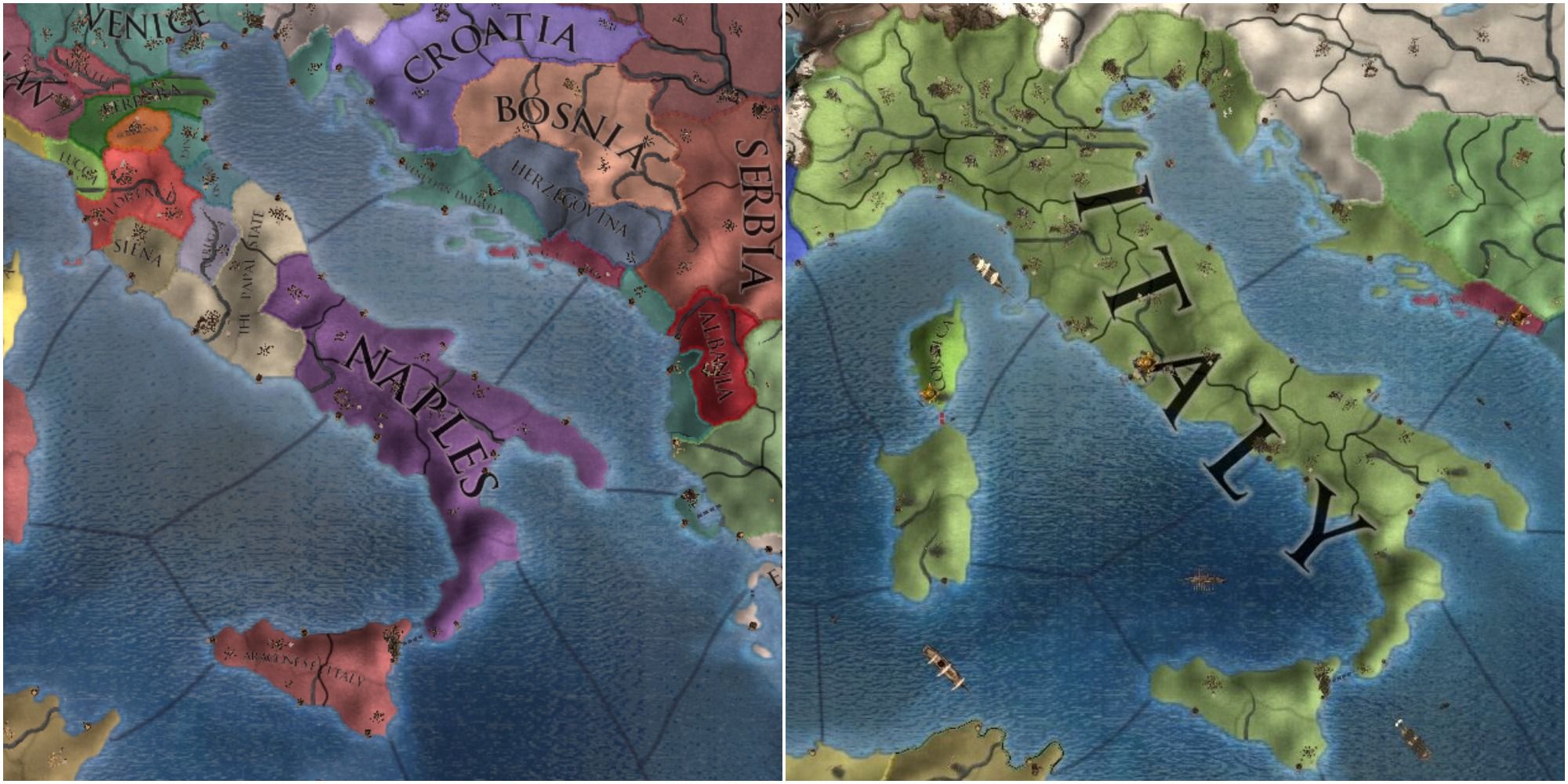 The Italian peninsula is one of the most developed pieces of terrestrial real estate in the game, and competition for it is high. What's the payoff? A stable nation with great economic and diplomatic abilities and the chance to rule the Mediterranean with a formidable navy.

Naples starts in a personal union with Aragon as the junior partner, but you can get your independence with the Conquest of Paradise DLC. If you don't have the DLC, fear not! Forming Italy can come from other Italian nations as well, many of which are quite good. Florence, for example, can form Tuscany and quickly expand to form Italy that way.

The benefit of a Neapolitan start, however, is that you begin with the southern half of the boot and have access to the sea on both sides of the peninsula. Fun fact: Italy is the only Catholic nation in the game that can hold Roma and subjugate the Papal States without any penalties. 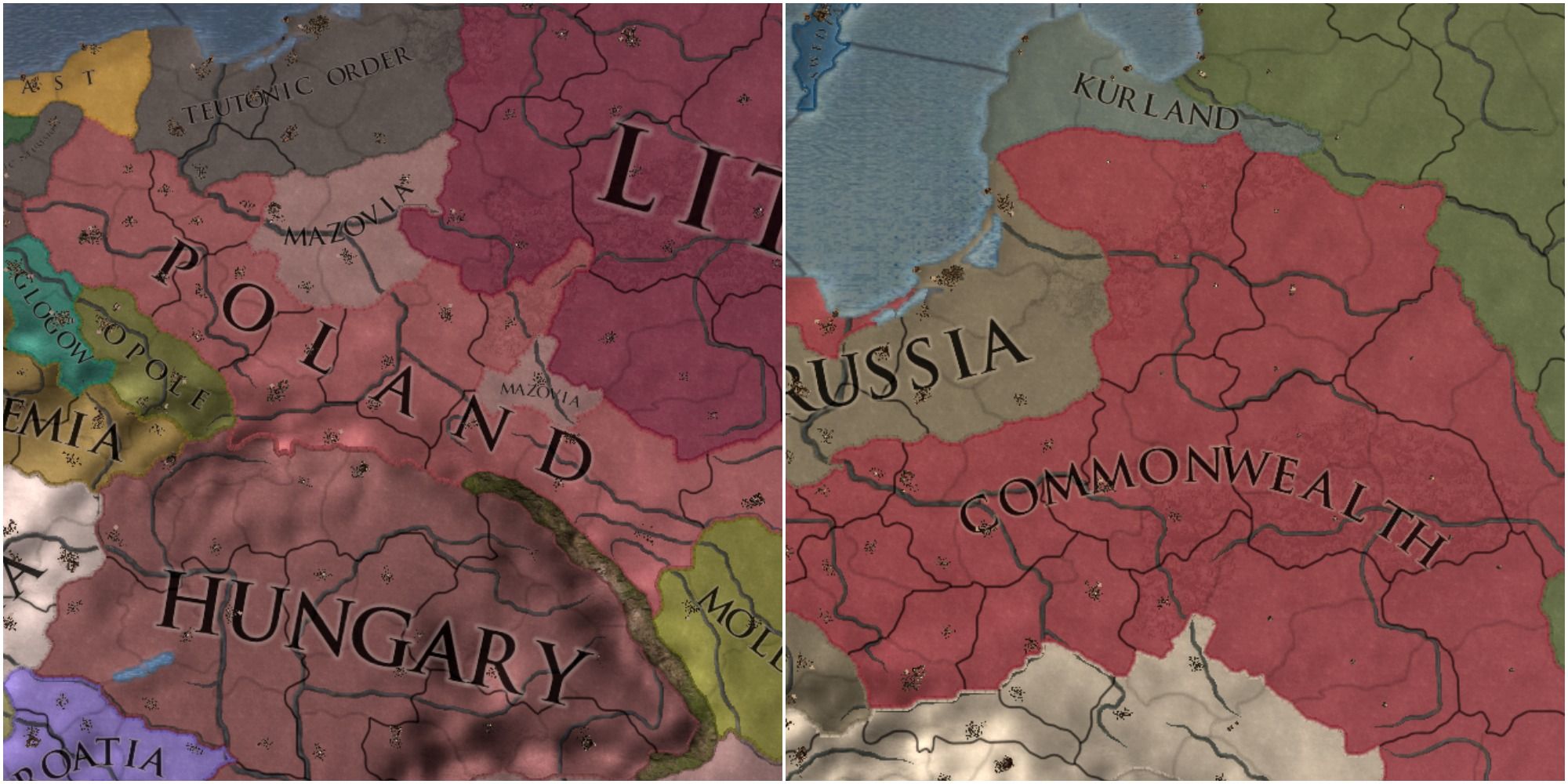 You can form Commonwealth via Lithuania, but Poland starts off in a better position economically and has the superior military, so Poland it is. Eastern Europe in the 16th century can be a dangerous place in EU4.

The Ottomans have been snowballing in power since 1444, and Muscovy or Russia have been expanding eastward for a couple of hundred years, growing in both size and power. If you're in the region and you're neither of those nations, then the Commonwealth's superior cavalry, army morale, and overall stability is your best chance of staying alive. 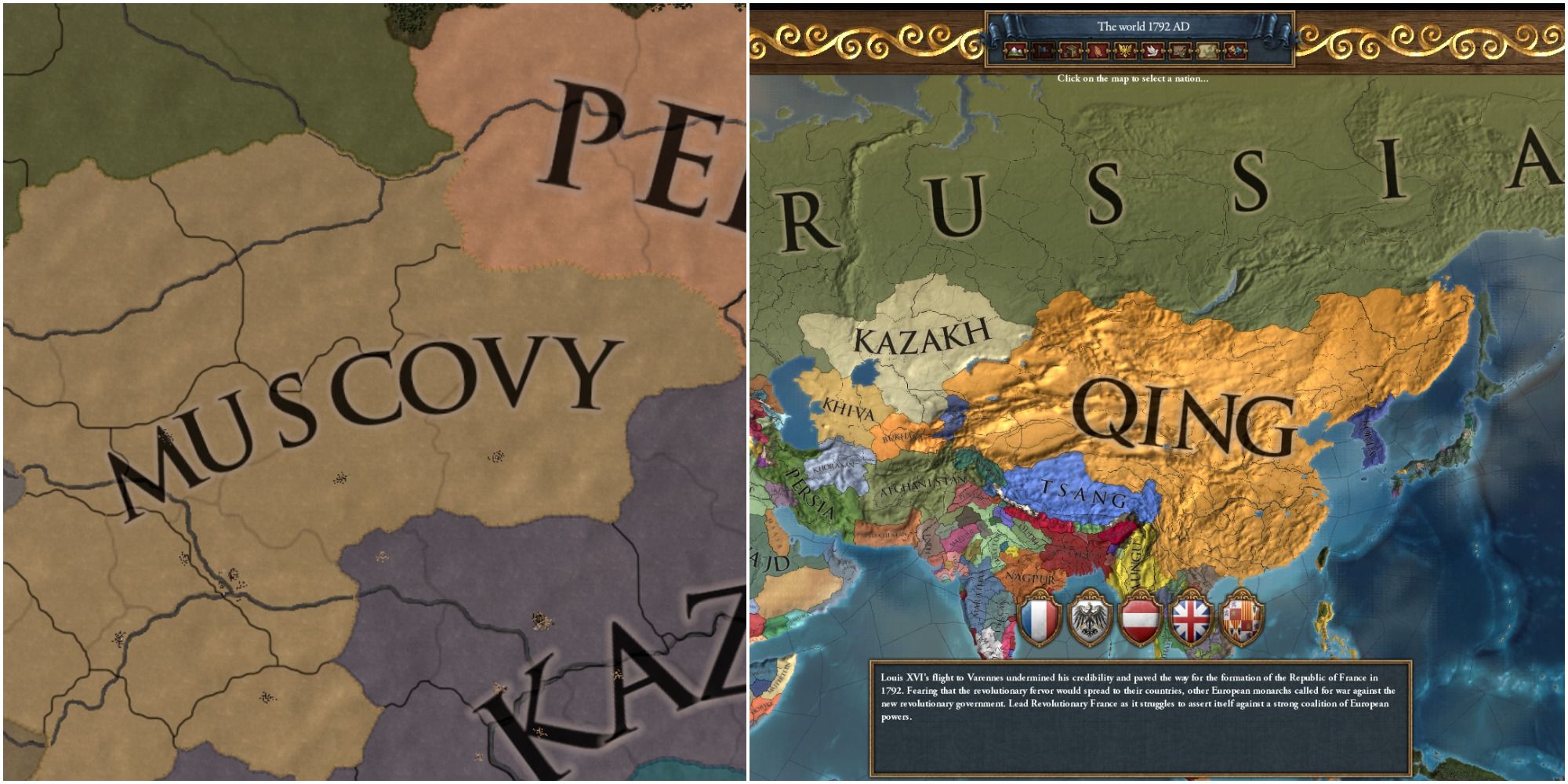 Beginning in 1444, you'll likely be engaged in a rivalry against the frightening Ottomans right away, and it takes a lot of power to survive, let alone to thrive as their neighbors. But as Muscovy and later Russia, you will thrive!

Russia can field an enormous army, especially if you take Quantity ideas and make use of their Life-Long Conscription idea, which grants the Russian player 50 percent extra to your allowed army size. Russian troops also take less fire damage, artillery is cheaper, penalties for aggressive expansion are reduced, and you pay less to core provinces. 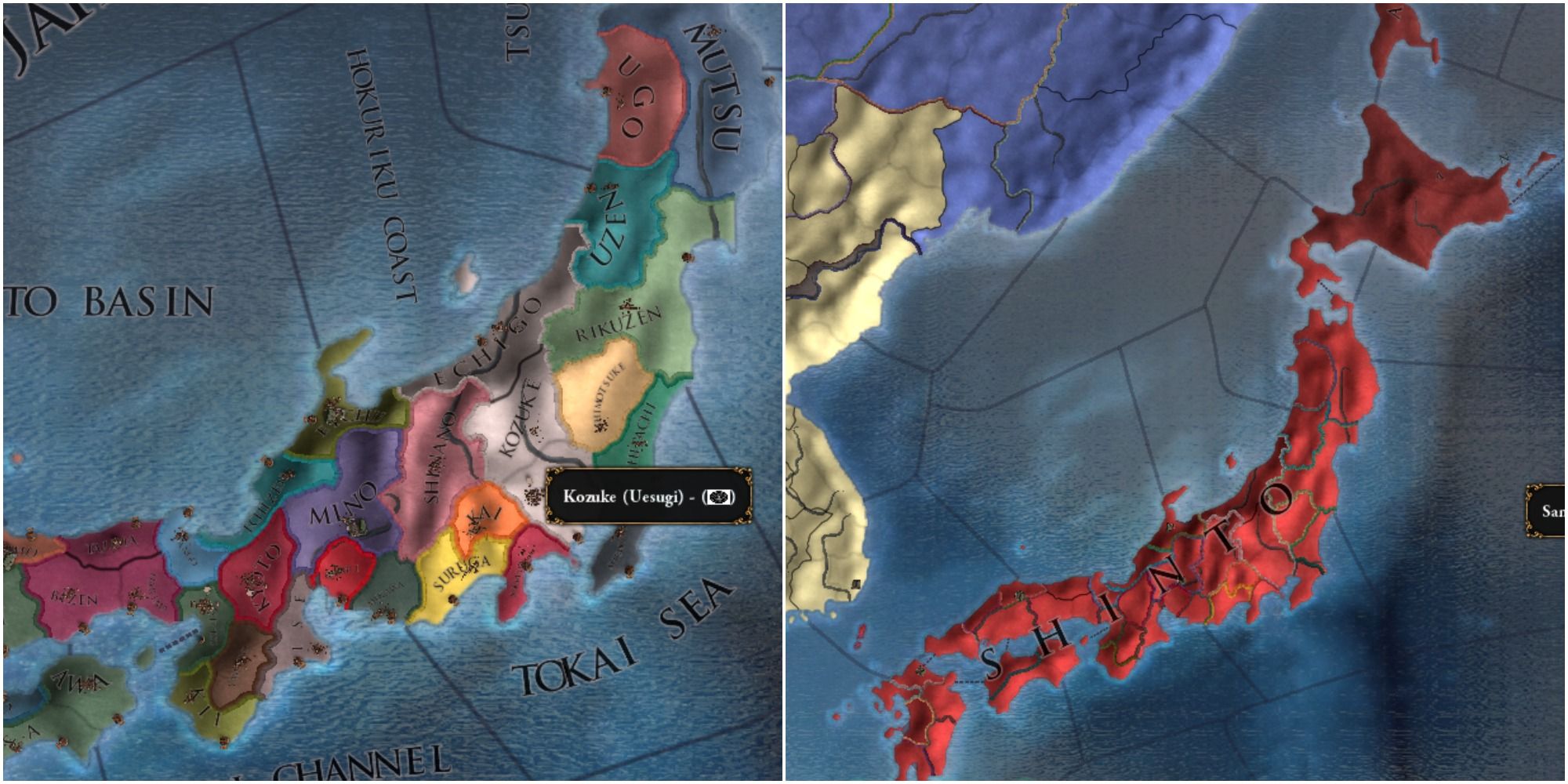 In 1444, the warring states of Japan begin as tiny nations with one-to-a-handful of provinces. You're making no money, and war is happening all around you. No matter – Uesugi is the way to unite Japan.

Uesugi holds three provinces in the Hokoriko region, which gives them good access to the sea on both sides of the archipelago. This positioning is also useful in allowing Uesugi to take the northeast with relatively less competition from the other daimyos. Sure, you may have to take out a boatload of loans to field a competent army and navy, but it's worth it… right? 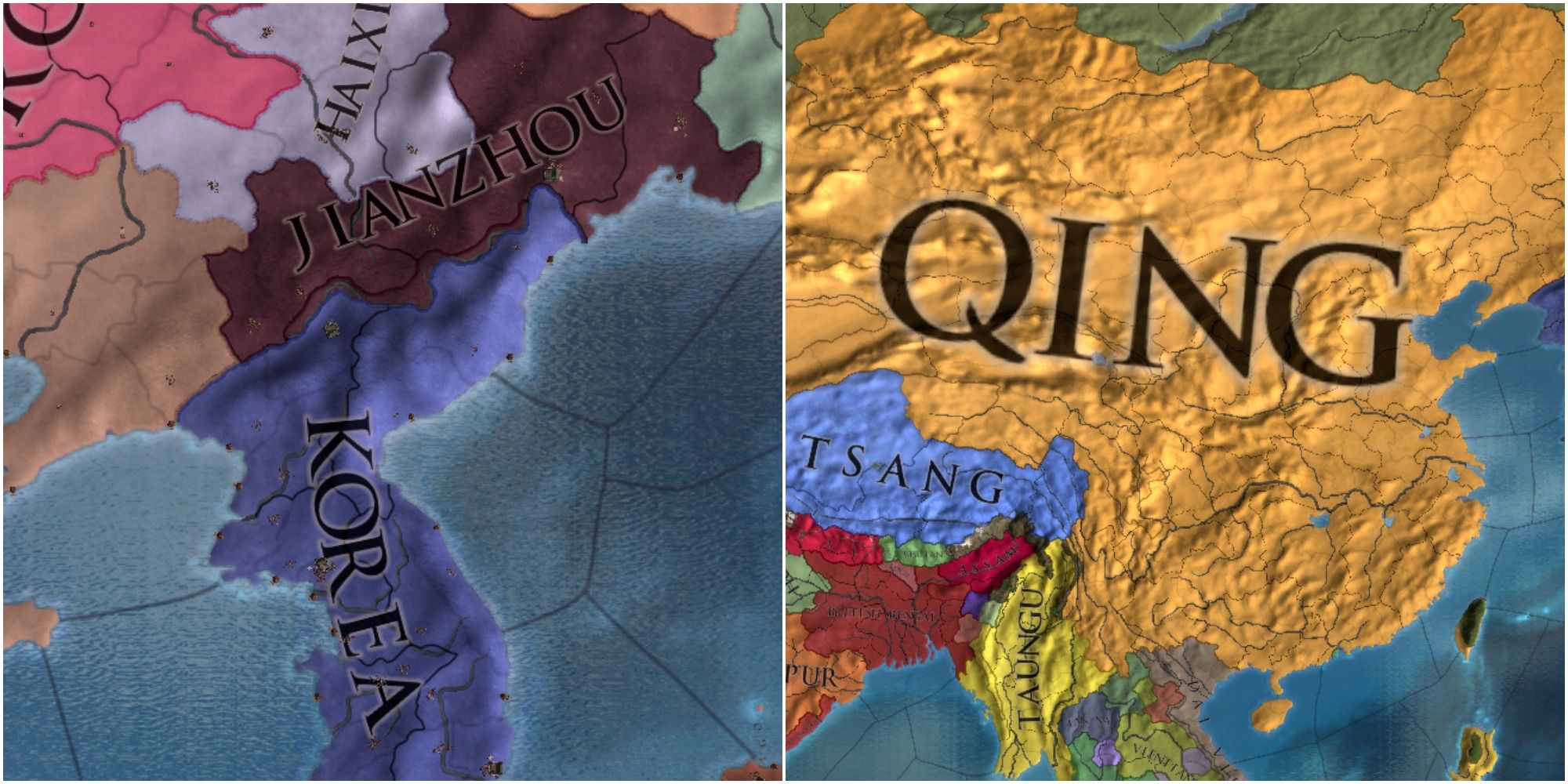 You might be surprised to learn that tiny Jianzhou, bordered by the all-mighty Ming in 1444, is a more-than-adequate nation to form a future world power. In fact, Jianzhou is the best non-Ming nation to play in the region, thanks to its strong military ideas. Jianzhou boasts bonuses to their morale and manpower and suffers less attrition in enemy lands while also giving their enemies additional attrition in Jianzhou's own lands.

Jianzhou also has added bonuses to yearly legitimacy, horde unity, and stability. Keep in mind that Jianzhou can form Qing after they have formed Manchu via the Nurhachi's Reforms event, which triggers only once per game.