Everything We Know About Magic The Gathering’s Unfinity

Magic the Gathering's parody 'Un-sets' are always a highlight of the year they release in. Starting with Unglued back in 1998, these Silver-bordered parody cards are free to get as out-there their design as they want. Sometimes it's used to try out mechanics before they hit the main game, like dice rolling long before its debut in Adventures in the Forgotten Realms, and other times it's just silly, like a card that has flying for as long as it's held above the table.

In 2022, we're getting Unfinity, the fifth Un-set (fourth if you don't count the reprint boxset Unsanctioned), and this time we're heading into outer space to visit Myra the Magnificent's Intergalactic Astrotorium of Fun. Here's everything you need to know about Unfinity ahead of its launch.

Where Is Unfinity Set? 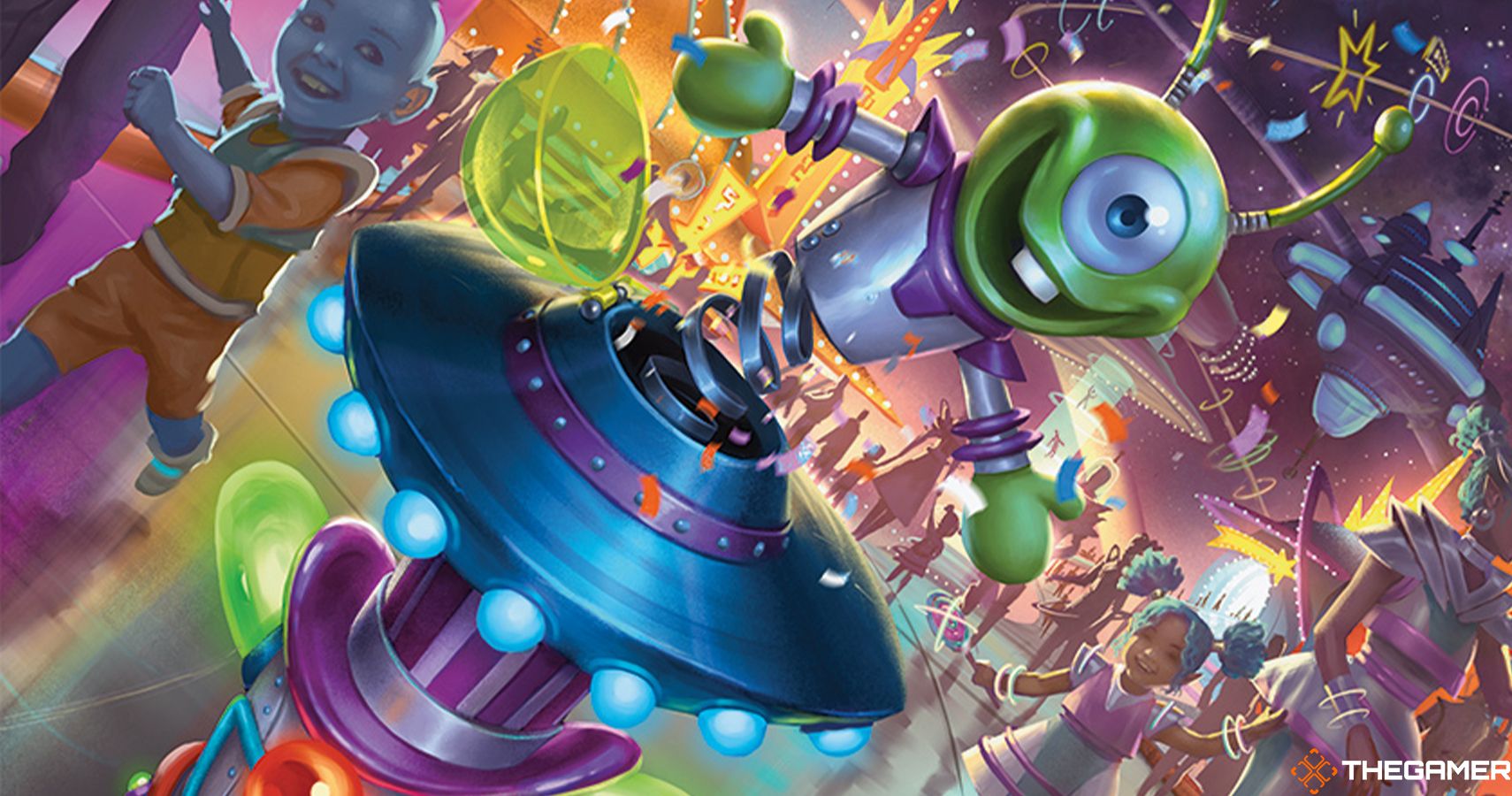 Unfinity is the first time an Un-set has had a "top-down design". In Magic, sets are designed in one of two ways. A bottom-up design is a set where the mechanics were pinned down before any setting or aesthetic, like how Zendikar is the product of Wizards wanting to make a land-matters set. Top-down design is the opposite and starts with a setting, story, or general theme, and then the mechanics are designed around it (Innistrad, Kaldheim, and Ikoria are examples of top-down sets).

Like all Un-sets, Unfinity is set outside of the main Magic canon, in an alternate reality known as the "Un-iverse". Specifically, it takes place at Myra the Magnificent's Intergalactic Astrotorium of Fun, a retrofuturistic, outer-space funfair and circus. The set intends to play up all those funfair, carnival and circus tropes (carnival games, clowns, rollercoasters, that kind of thing) and mash it up with old 1950s/1960s sci-fi tropes found in stuff like The Jetsons and the original Lost In Space. Robots, flying cars, and lots of atomic age designs are going to appear in the set.

Coulrophobes don't need to worry, it has already been confirmed that there will be no scary clowns in the set. Clowns in the Astrotorium are instead cute, colourful robots, like the ones seen on the card Assembled Ensemble.

To help play up the comedic aspects of Unfinity, Wizards of the Coast has brought in outside help for the writing. Members of the popular Youtube channel LoadingReadyRun, former Cracked writer 'Seanbaby', and established MTG flavour text writer Austin Bridges have all been drafted in to write for the set.

What Are Unfinity's Full-Art Lands And Shock Lands? 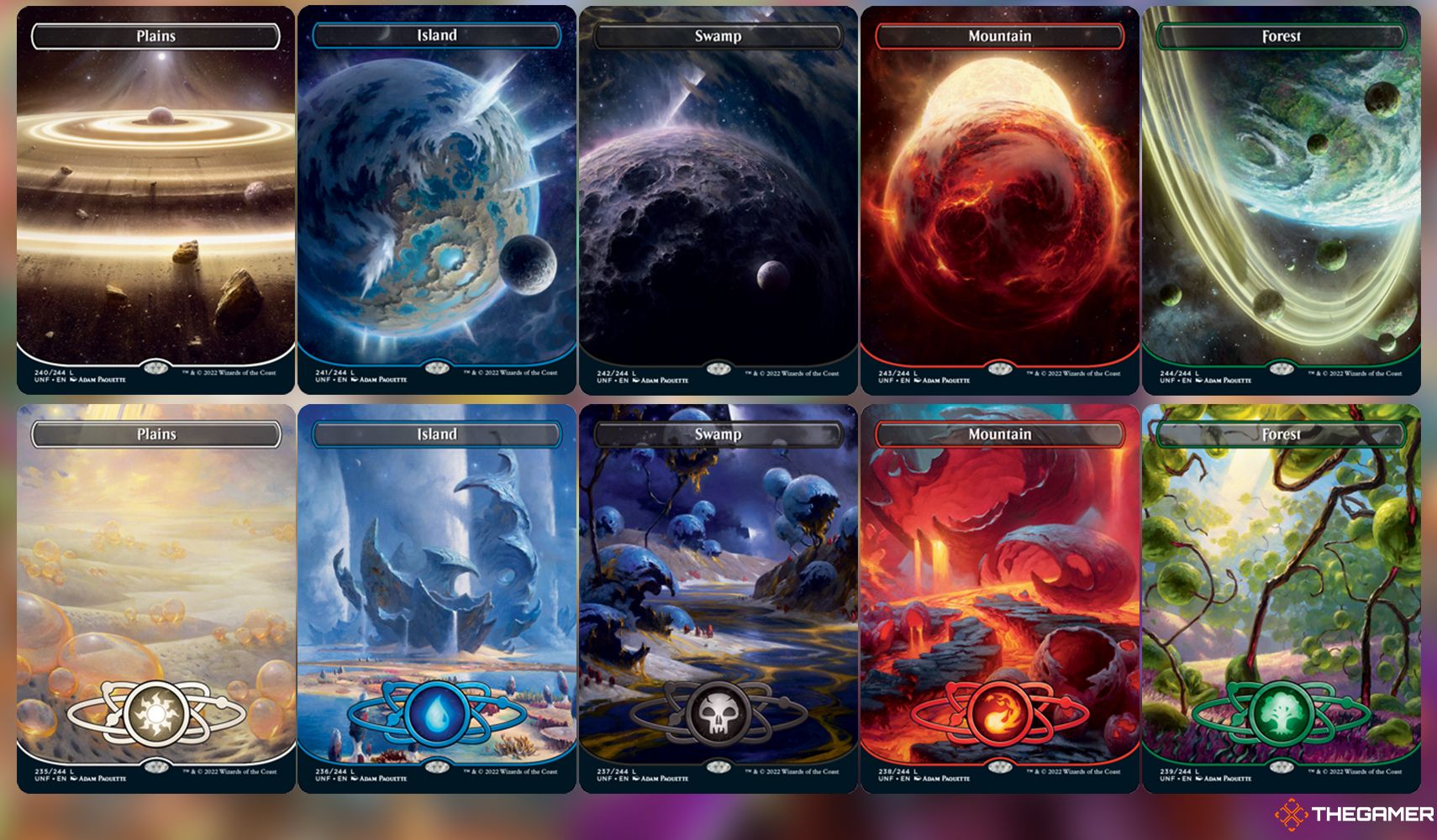 A key feature of Un-sets has always been the inclusion of gorgeous full-art lands. As they're just lands they're free to be used in any deck, but they often look radically different to anything seen in a normal Magic release, making them highly sought-after cards.

Unfinity is taking it a step further by having two different sets of full-art basic lands (dubbed 'Space-ic Lands' to match the theme): Planetary Spac-ic Lands showcase the environments of various planets in the Un-iverse, and is the most common type of full-art land. You'll find these in approximately 72% of all draft boosters, while Collector's boosters have double the chances to find one.

The second style is the Orbital Space-ic Lands. These feature entire planets and are easily the most sci-fi cards we've ever seen for Magic so far. Orbital Space-ics are much less common than the Planetary style, only being found in about 25% of draft boosters. Like Planetary Space-ics, there are two opportunities to find an Orbital Space-ic in a Collector's booster. 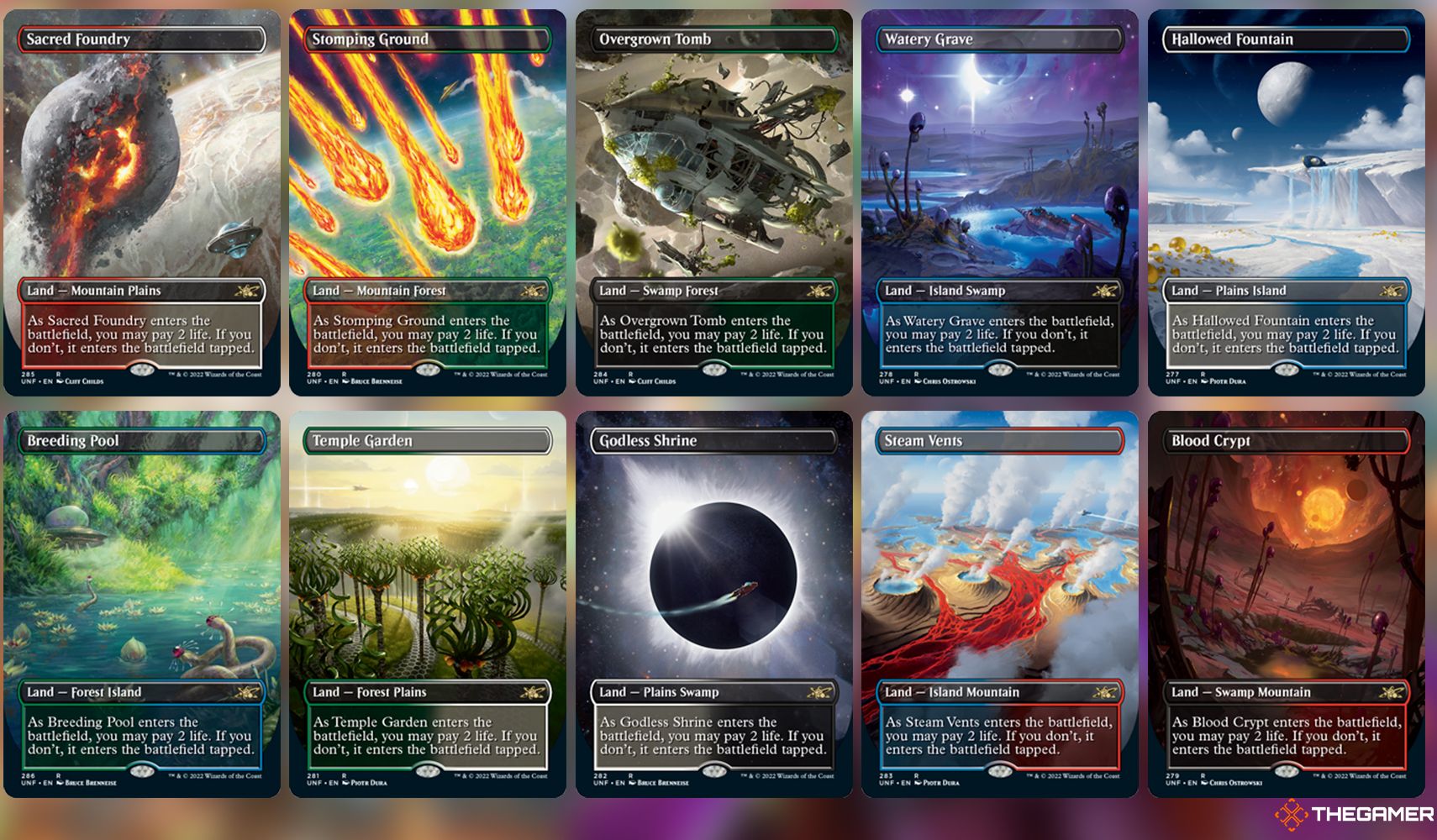 For most players, the most exciting thing is going to be the reprinting of all ten shock lands. Shock lands are incredibly useful in a range of formats thanks to having their land types listed on them (making them more easily tutorable) and being a fast way to get access to two colours of mana.

Each shock land will have a sci-fi themed full-art printing in Unfinity, with scenes like a plant-infested spaceship for Overgrown Tomb or a black hole for Godless Shrine. They'll appear a lot less frequently than Space-ic lands, appearing in just one in 24 draft boosters and two in 24 of the designated land slots in Collector's booster packs. These will also serve as the box-toppers for Unfinity, with every draft and collector's booster box including a foil shock land guaranteed.

What Are Silver Border And Acorn Cards? 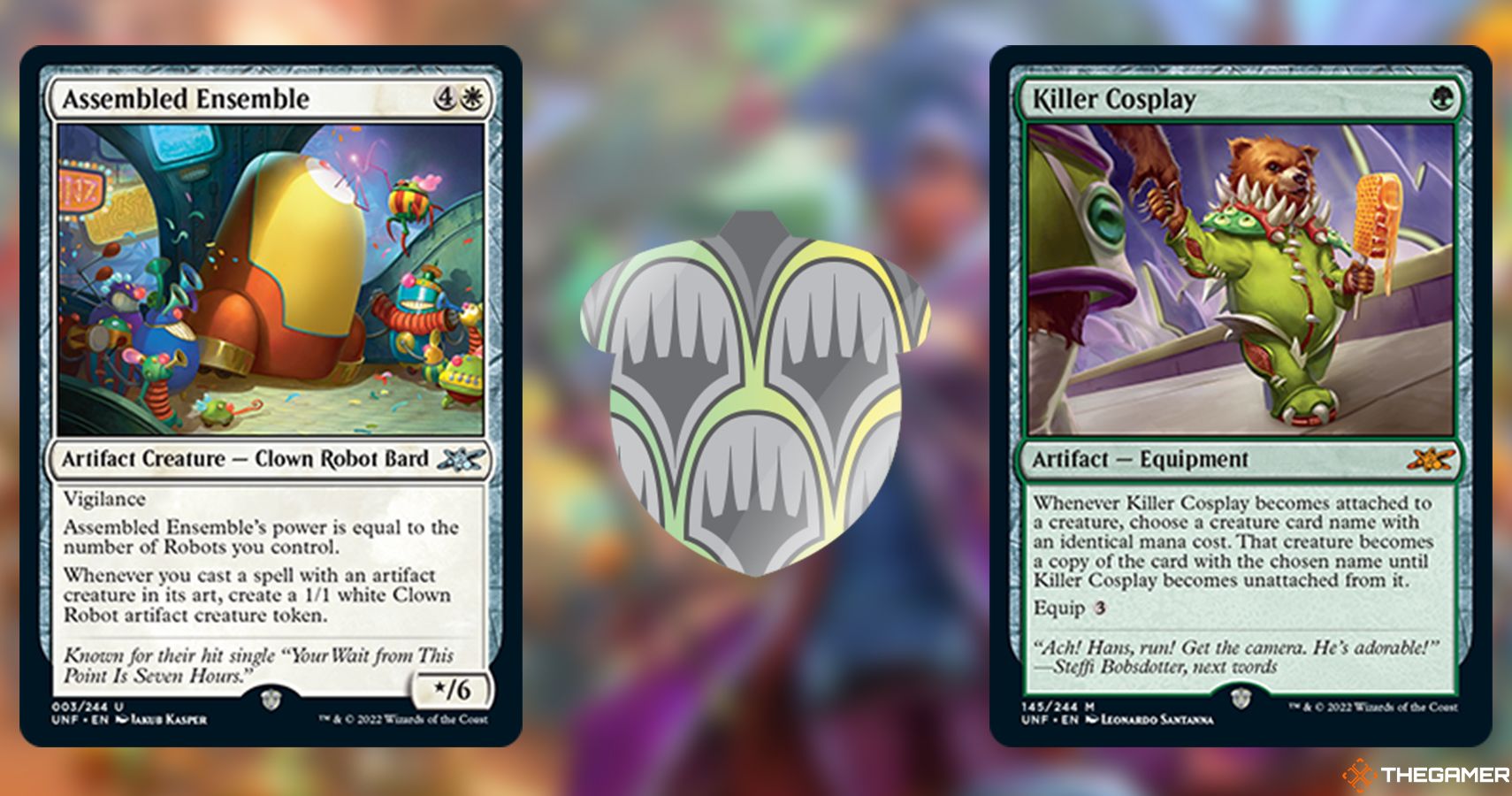 Traditionally, Un-sets have been printed with silver borders to denote that they're not to be played out of their own formats (for example, an Unstable Draft or Unhinged constructed game). You can't take a card from Unglued or Unhinged and ram it into your Legacy deck, for example, and this freedom from established formats and metagames has allowed Wizards to make some truly weird Un-cards over the years. You wouldn't be able to put a card with Denimwalk that can't be blocked by an opponent wearing Denim, or Syr Cadian's ability to gain flying or vigilance depending on the time of day the game's being played, into the wider card pool and it not cause havoc.

For Unfinity, Wizards is experimenting with allowing some cards from the set to be played in established formats. To facilitate this, silver borders have been completely removed and are now replaced with 'Acorn Cards'. Every card in Unfinity will have a black border like a regular Magic release, and by default will be playable in eternal formats like Legacy, Vintage, and Commander. But if a card has an acorn holographic stamp on it, it is effectively a silver-bordered card and can't be played outside of games that expressly permit them beforehand.

That means that, while you're free to play cards like Saw in Half or The Space Family Goblinson in Vintage, Legacy, or Commander, but you can't play Killer Cosplay or Assembled Ensemble because they have the Acorn stamp.

In fact, Unfinity is being made with Commander in mind. Wizards has confirmed that 30 Legendary creatures will be in the set, and at least 10 of them will not have Acorn stamps. That doesn't mean those other 20 are permanently barred from Commander, though, as the appeal of the format is that it's a lot more flexible than others and can allow Acorn cards if your playgroup agrees to it. Un-set Commander games can be hilarious, and have always been popular with the community, so Unfinity seems to be leaning into that a lot more.

Note that this isn't a Standard-legal set, and so even black-bordered, un-acorned cards aren't legal in formats like Standard, Pioneer, or Modern.

What Are Unfinity's Showcase Frames? 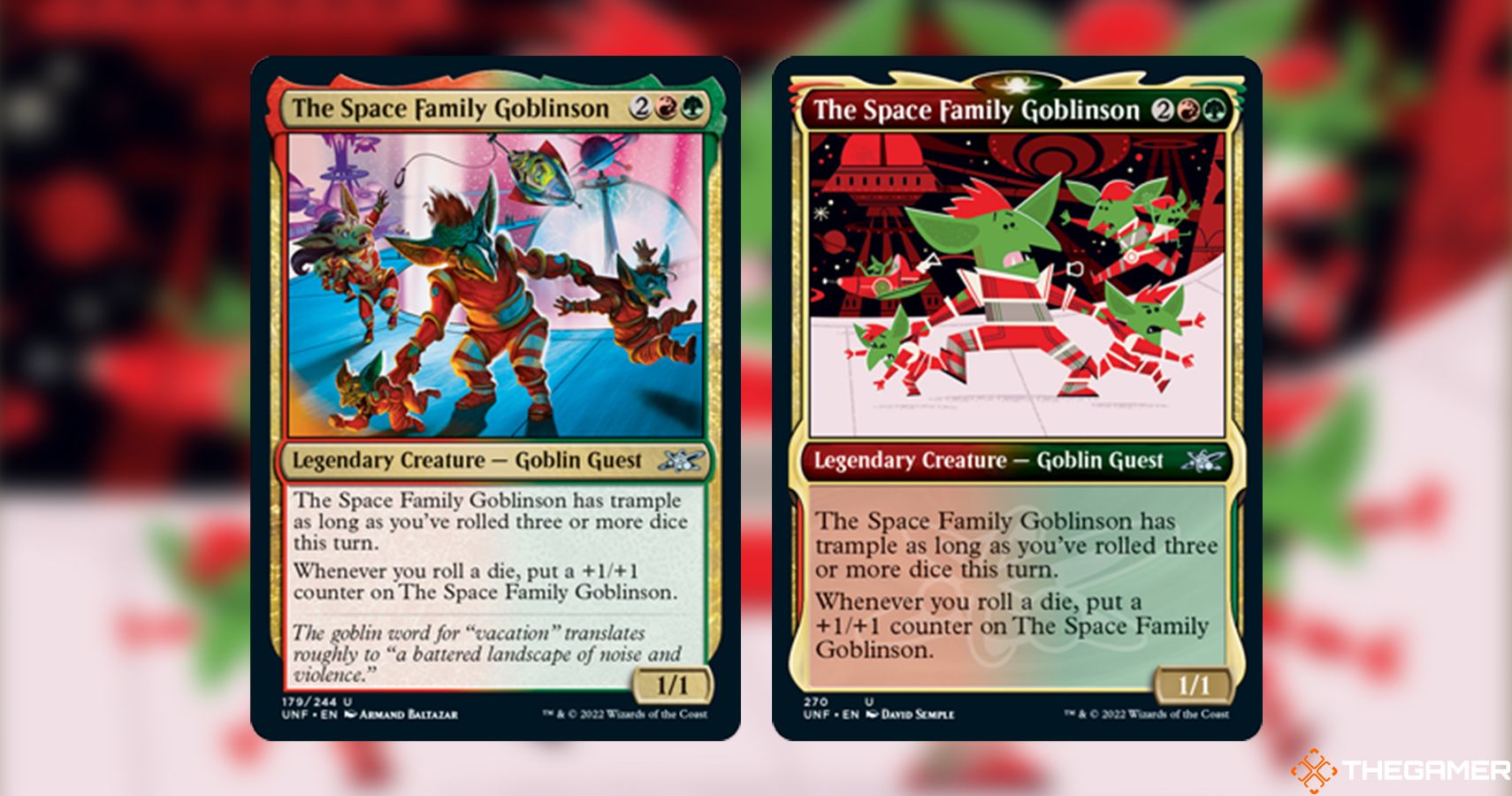 Unfinity is the first full Un-set released since the introduction of showcase frames with Throne of Eldraine, and so it's receiving its very own alternate card art style.

To fit with the retrofuturism, Unfinity's showcase frame is known as the 'Showcase Cards of Tomorrow' frame. It plays up the '50s/'60s atomic aesthetic in a big way. Sharp lines, flat colours and ornately aerodynamic frames define the style, and it's said to appear not only on creatures but also on full-art borderless Planeswalker cards as well.

Will Unfinity Have Commander Decks? 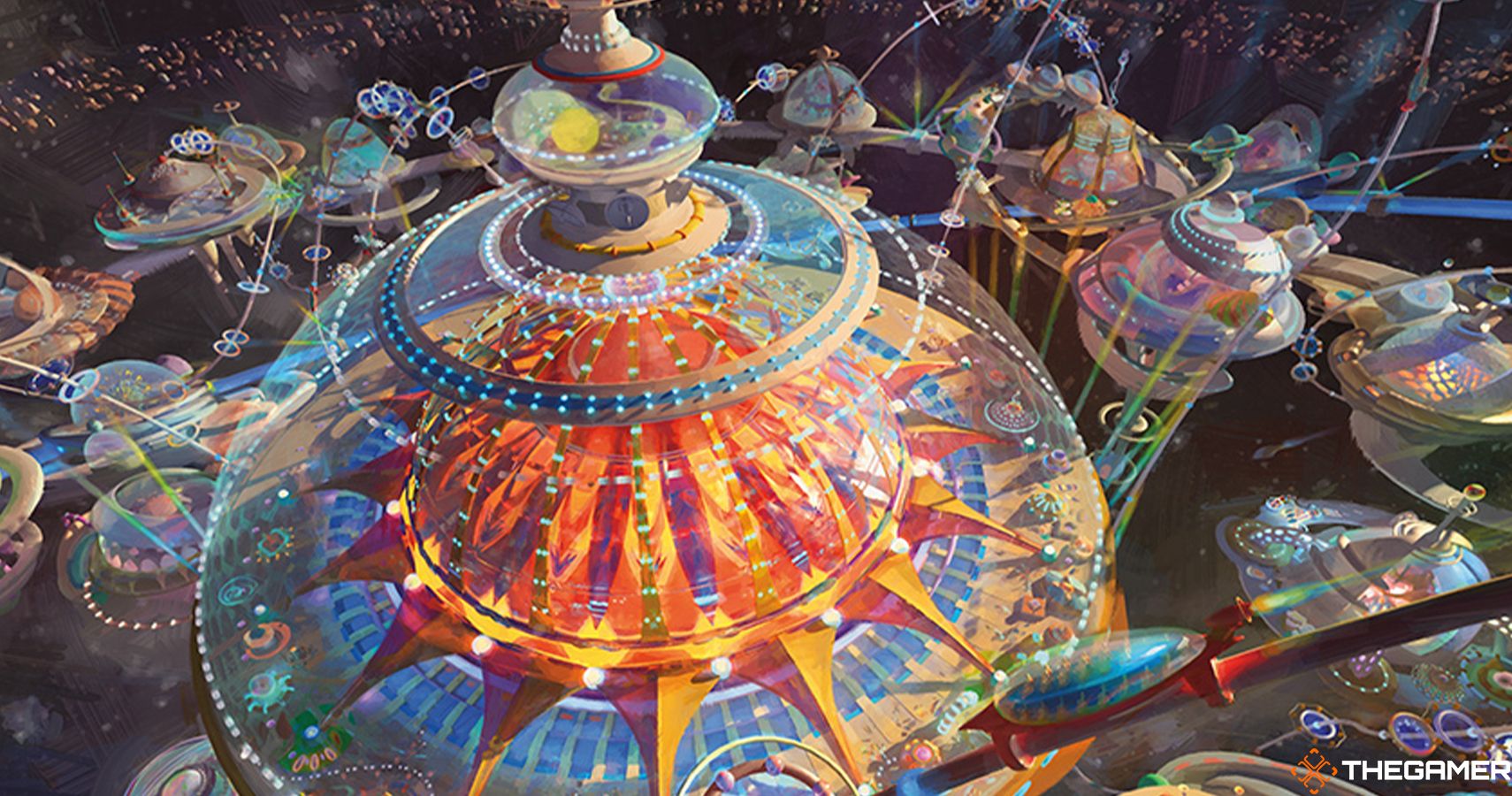 No Commander preconstructed decks have been announced for Unfinity. Precons are linked to the yearly premiere releases, and don't tend to get launched alongside supplementary products like Unfinity or Modern Horizons 2. Commander Legends got decks, though, and silver-bordered/Acorn Commander decks would certainly be something new for Wizards to try out. It is unlikely, though, as Commander decks tend to be announced alongside the set itself. If we were going to get them, we'd have probably heard of them by now.

What Is Unfinity's Release Date? 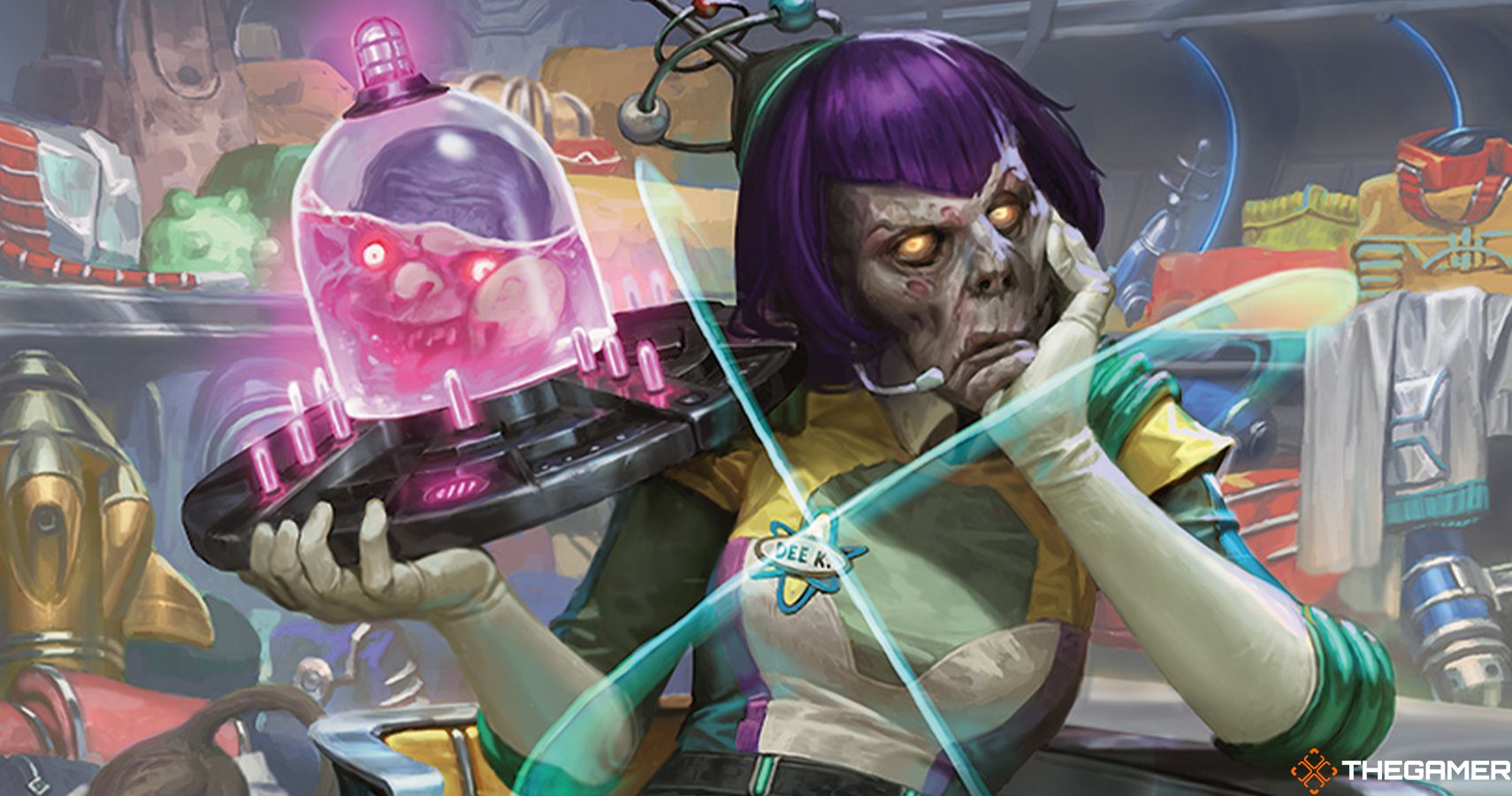 There's only really one date a comedic parody set could launch, isn't there? Unfinity launches on April 1, 2022 for tabletop play.

It is incredibly unlikely we'll see Unfinity launch on either Magic Online or Magic the Gathering Arena. Un-sets often break the usual rules of Magic in a way that adapting for digital play would be difficult, so don't expect it to launch anywhere but in paper any time soon.

Dates for spoilers seasons or a more complete reveal have yet to be announced but expect it sometime in late February or March, after the launch of Kamigawa: Neon Dynasty.