Everything You Need To Know About Slay The Spire’s New Fan Expansion, Downfall

Downfall, the new free fan expansion for Slay the Spire, grew from a modest mod into a full-blown fan expansion from Table 9 Studio with its own Steam page (which you can and should visit here). In addition to a new character for the main game, Downfall offers a brand-new campaign where the player takes the role of villains, defending the Spire’s heart from the heroes. Each of the seven monster characters comes with its own cards, relics, potions, and mechanics.

From the new gunslinger The Hermit to the familiar Slime Boss, Downfall expands on the popular deck building roguelike from 2017, enhancing the classic game while adding a fun new dimension for experienced players to enjoy. Here are all the crucial details about the new content. 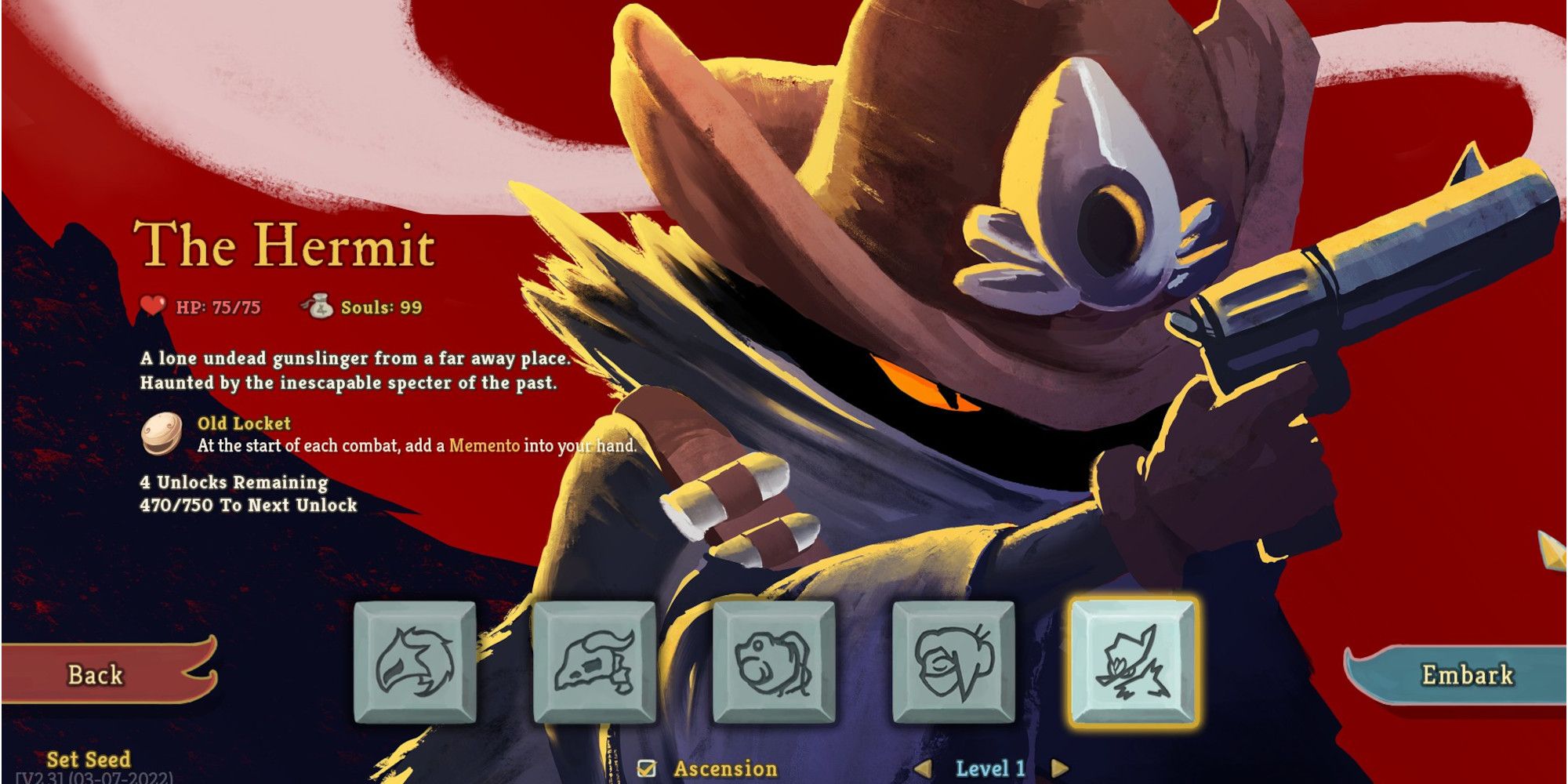 The fifth hero to enter the Spire, the Hermit comes with a new deck as well as several new abilities. The player can utilize their Dead On ability to achieve powerful effects (some of the strongest in the game are rather underrated) by playing cards from the middle of their hand. Some of these abilities deal additional damage or provide block. Practice with all of them will be crucial to surviving the twists, turns and RNG of the Spire.

In addition, the Hermit can inflict Bruise, a new status effect, to increase dealt damage to enemies, and can accrue Rugged, which reduces incoming unblocked damage to one.

10 A Variety Of New Relics And Potions Are Available 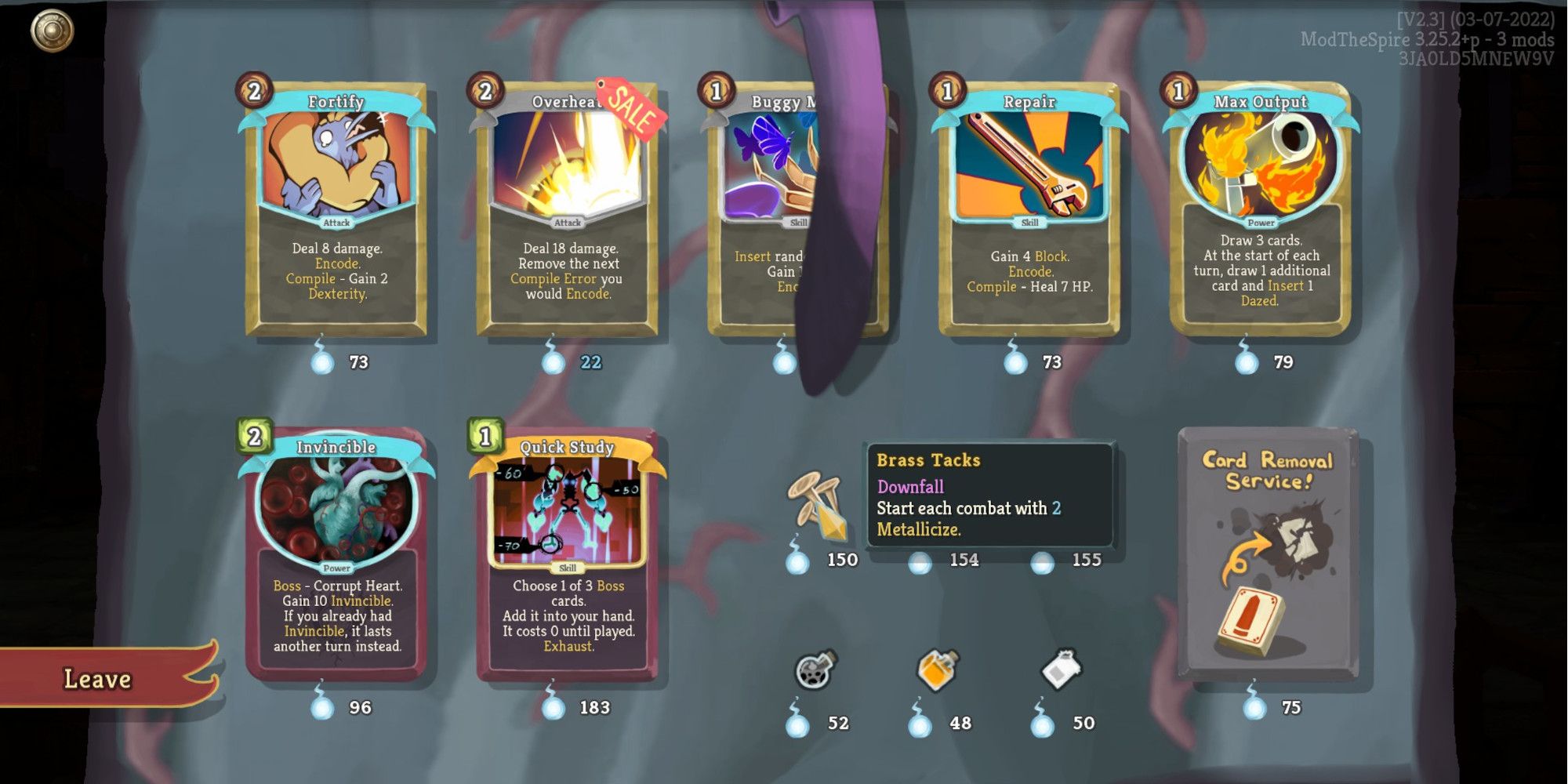 Whether playing the original content or the new campaign, you’ll definitely notice some new items in enemy drops and at the Merchant. Some are character-specific, like the Black Heart of Goo, which is the upgraded version of Slime Boss’s starter relic. Others can only be found in Downfall’s campaign, such as the Heart’s Blessings, which can be obtained by breaking the keys at campsites.

Some items, however, are useful no matter which character you've chosen. The Vexing Draught, for example, gives the character +2 buffs to Strength and Dexterity (at the cost of adding two Burn cards to your deck). 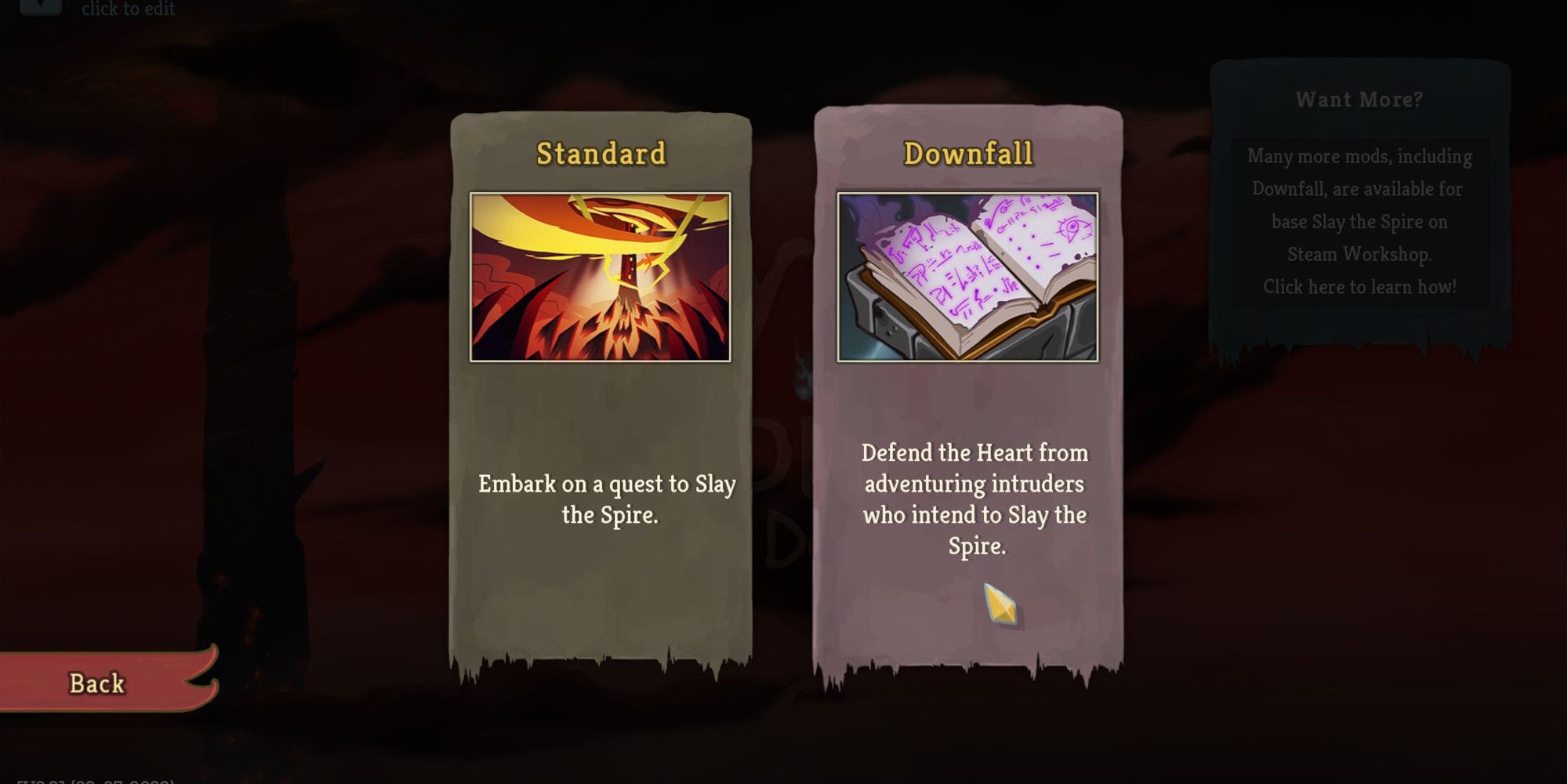 While the Hermit adds a fun new dimension to the challenging original game, the real draw of Downfall is the new campaign. The player will choose from a rogue’s gallery of villains to defend the Heart of the Spire against heroes. You’ll work your way down the Spire, fighting monsters and adventurers alike and collecting their souls, which are the expansion’s new currency.

You will also notice some new-yet-familiar encounters on the map. Remember in the original campaign in Act 1, where you stumble upon a trap and must choose which negative status effect to gain? In Downfall, you can rig this trap, then come back for the souls of the dead adventurer later. 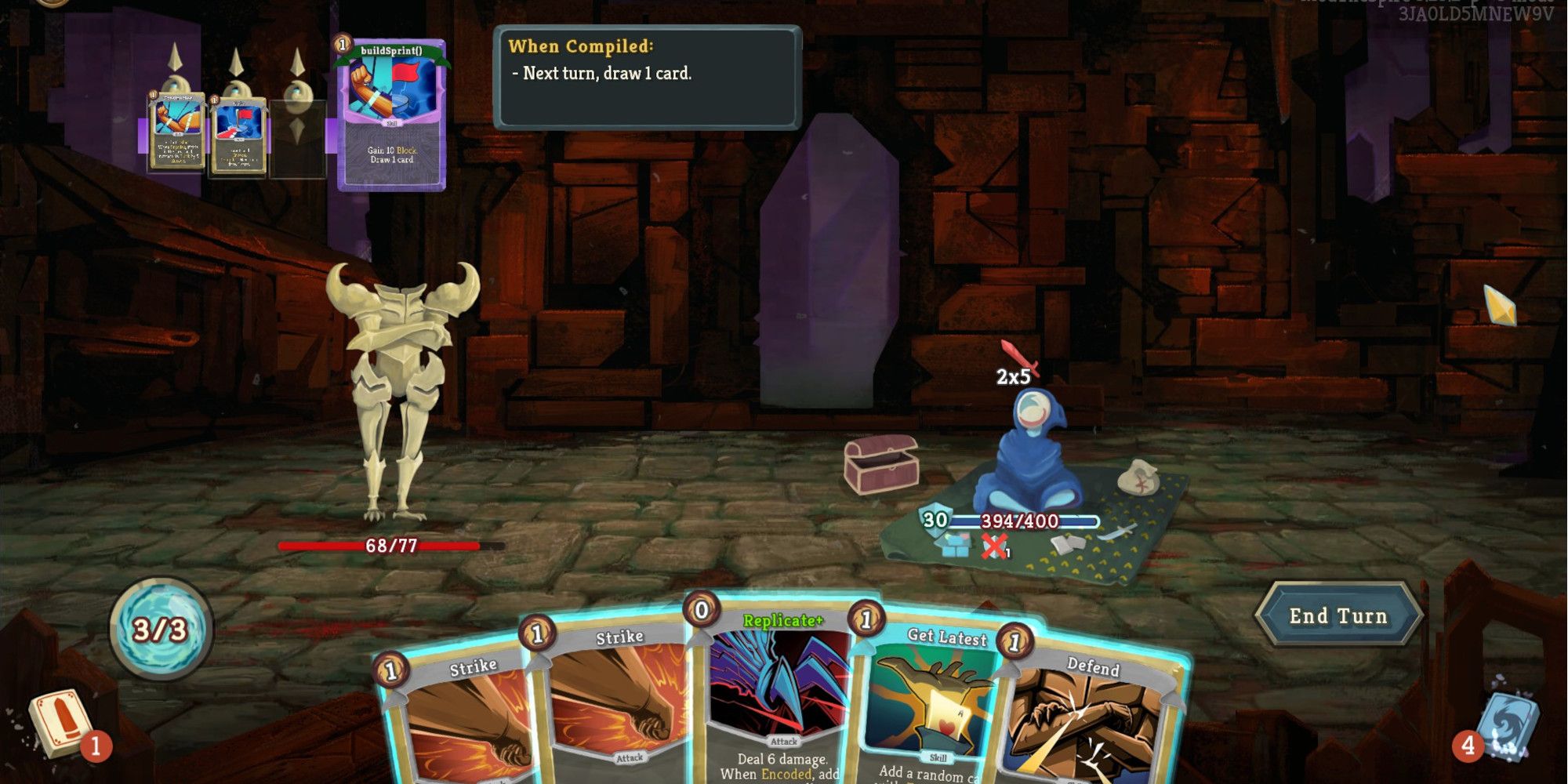 While playing as any of the villains, the Merchant will attack you when you encounter them. They have a lot of health and can deal a good amount of damage, so be careful when fighting them.

Luckily, they only attack once before stealing your souls and retreating, and once they're gone, the Heart will appear and sell items to you. This unique foe doesn’t heal any damage you deal to them, either, so over time, you can kill them. Once you do, you gain many souls and the Merchant will not return for the rest of your run. 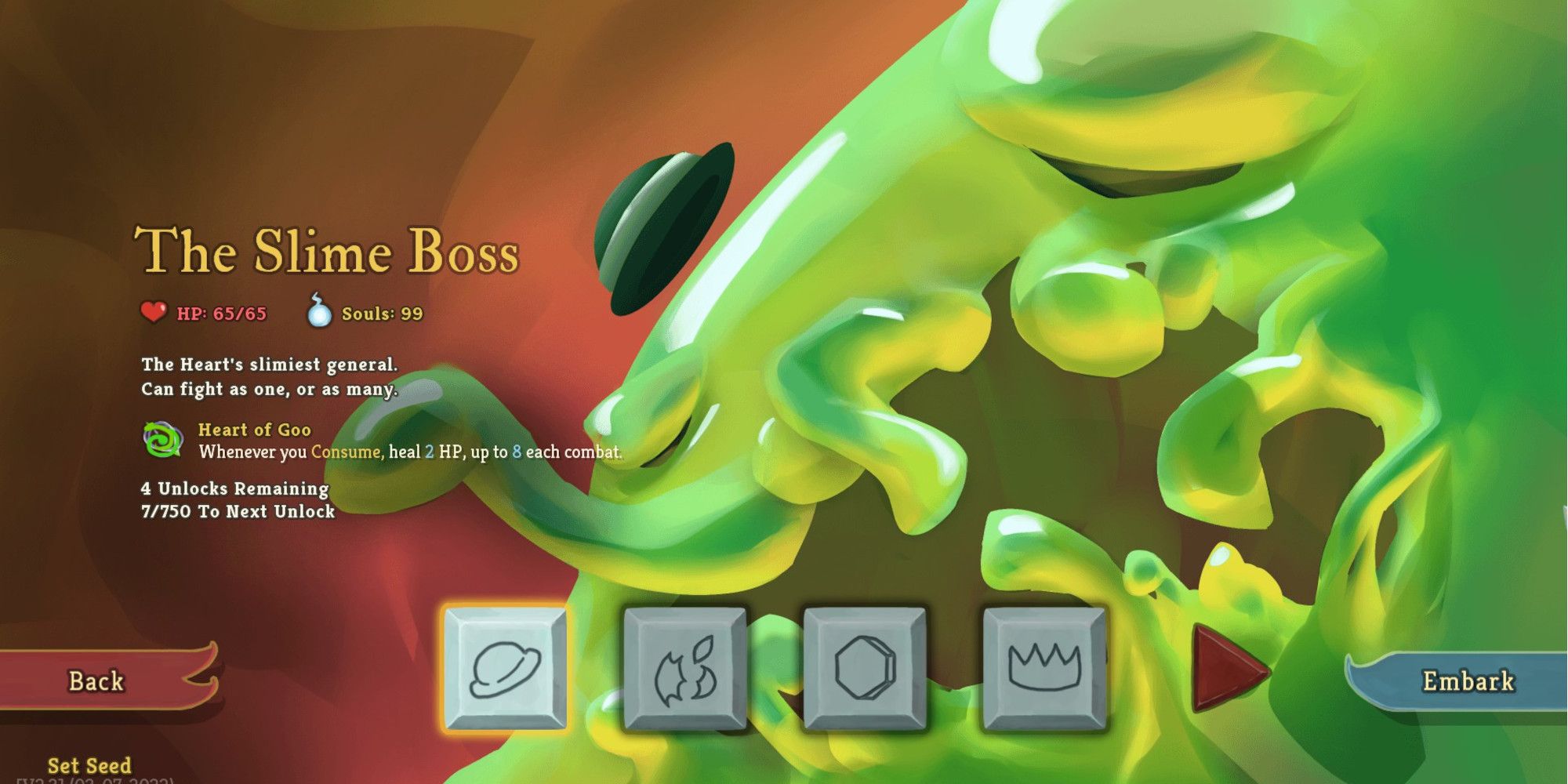 The introductory character for Downfall, the Slime Boss comes with its own deck and unique abilities. The hat-wearing slime can apply Goop to enemies, which can either increase the damage you deal to them or heal Slime Boss when consumed. It can also summon other slimes to fight at its side by Splitting. The starter slimes come in four varieties:

However, more can be unlocked later via special cards. This squishy customer is a unique new playable character with a variety of options.

6 The Guardian Is A Tricky Stance-Swapping Character, As Expected 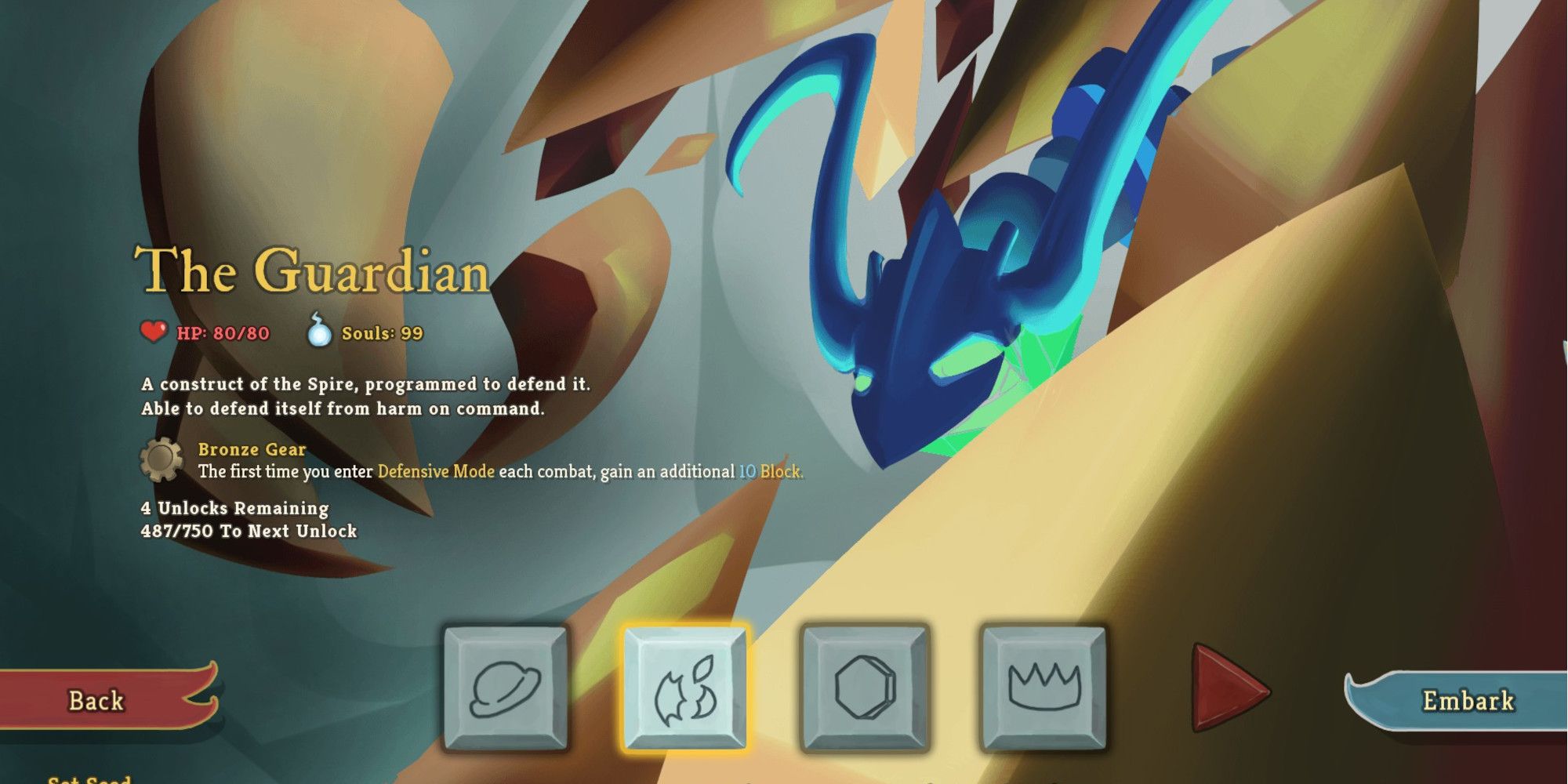 The Guardian, much like its original campaign counterpart, has two modes: Standard and Defensive. When Defensive mode is activated, the Guardian will curl up and increase its Block. In addition, certain cards can have gems inserted into them at campsites which provide special abilities, additional damage, status effects, etc.

The Guardian can also put cards into Stasis during combat. Once their counter reaches zero, they will return to the player’s hand with their cost reduced to zero. Those who enjoy the stance-swapping ways of the main game's enigmatic The Watcher will surely take to this character too.

5 The Playable Hexaghost Utilizes Ghostflames For A Range Of Bonuses 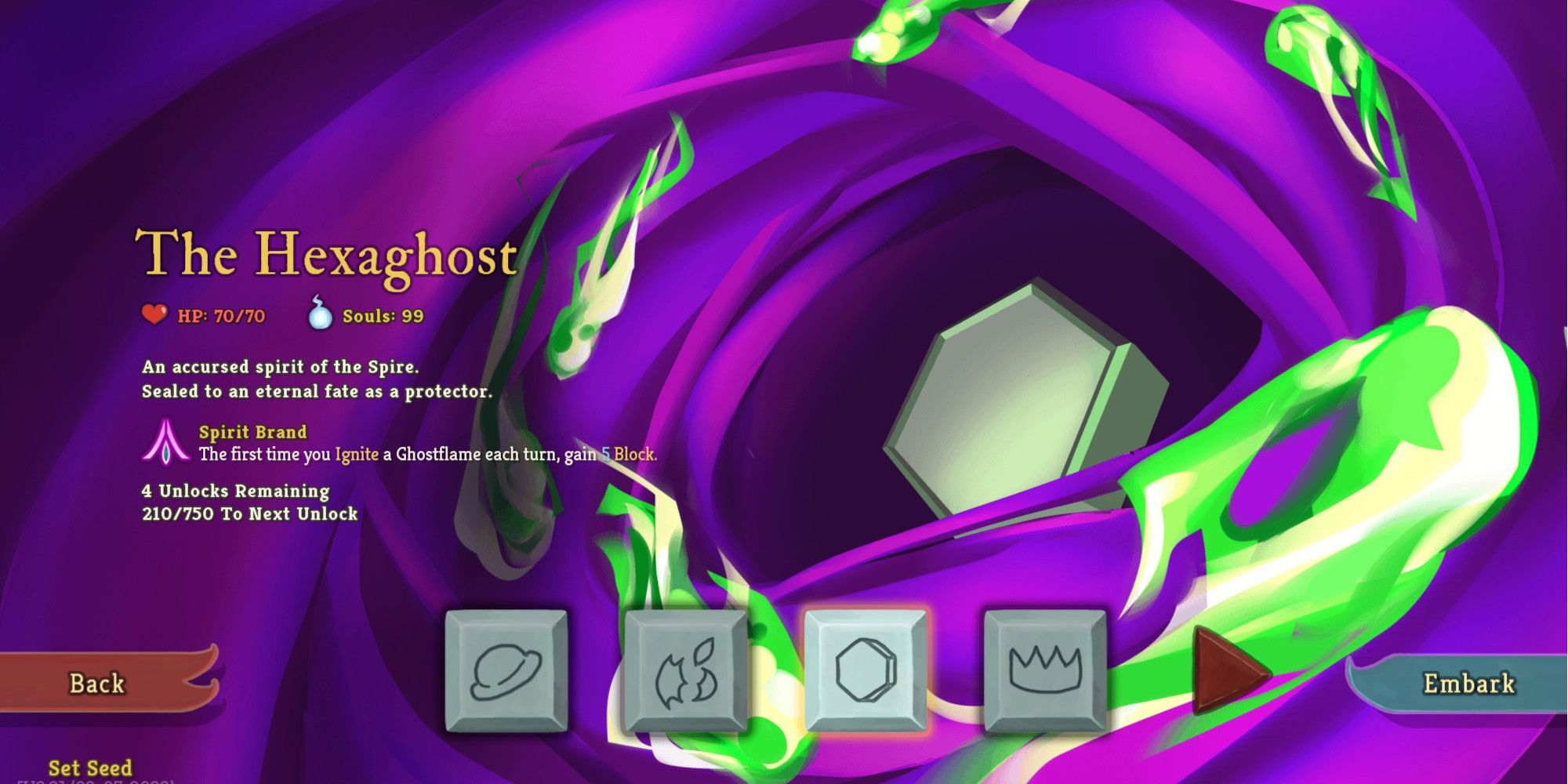 The Hexaghost relies on its ghostflames to inflict bonus damage, status effects, and special bonuses during combat. Each ghostflame can be ignited once certain conditions are met, such as attacking twice or playing a power card.

Once ignited, an action will be triggered, like gaining Block or dealing Soulburn, a new status effect. Soulburn accrues and isn’t removed until ignited. Once it’s ignited, Soulburn will deal one damage per stack. After being ignited, Hexaghost will advance to the next flame. The system is difficult to manage, but very powerful. 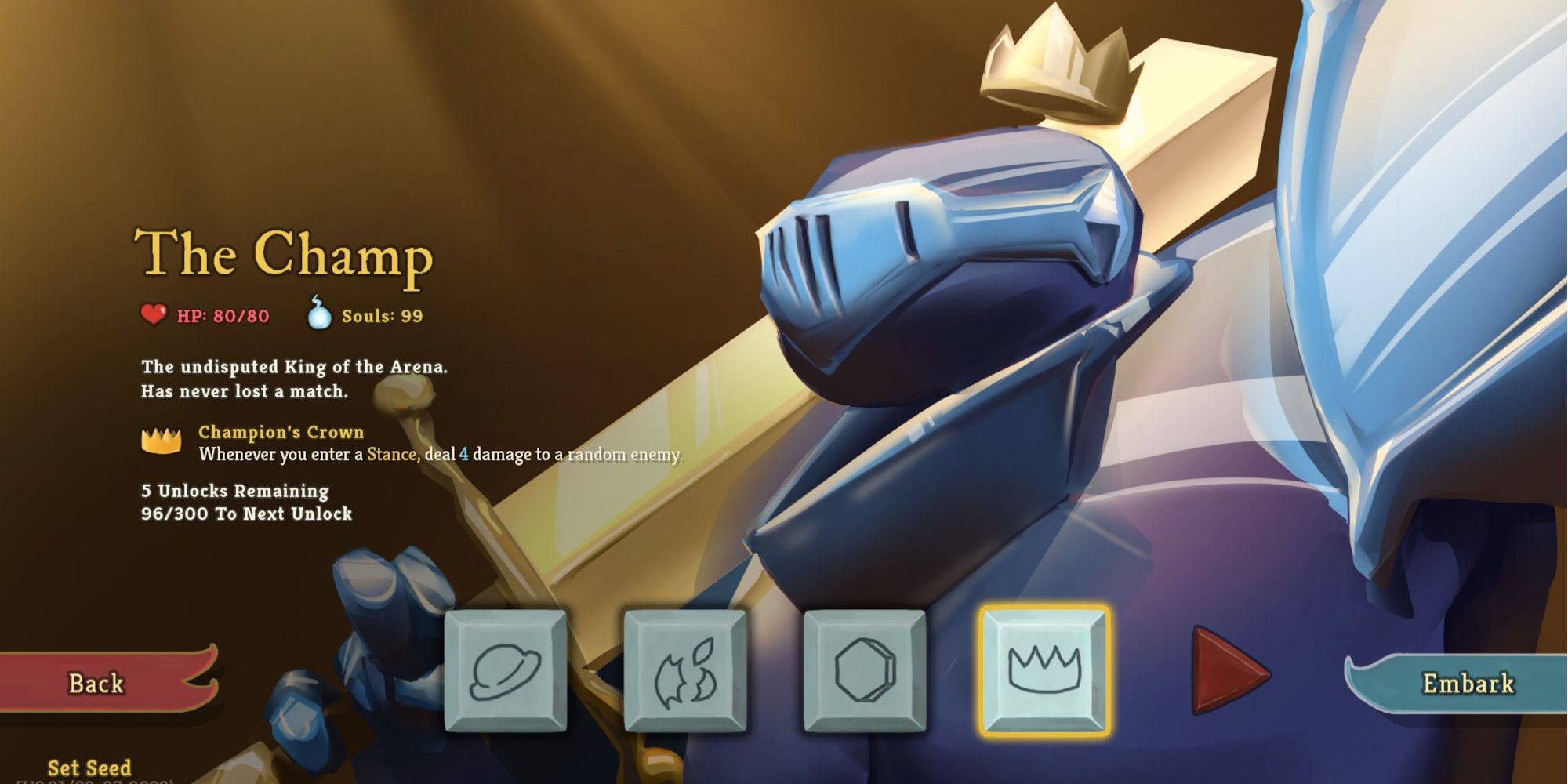 This knightly Slay the Spire boss utilizes stances and technique cards to create a balanced play style that can deal massive damage while also becoming a bulwark against it. The Champ has two stances: Berserker and Defensive. In Berserker, you gain vigor, which deals bonus damage. In Defensive, you gain counter, which reflects taken damage back at enemies.

Technique cards can be played out of stances, but have special abilities tied to one or other of the Champ’s stances. Finishers are powerful cards, but will remove you from your stance. 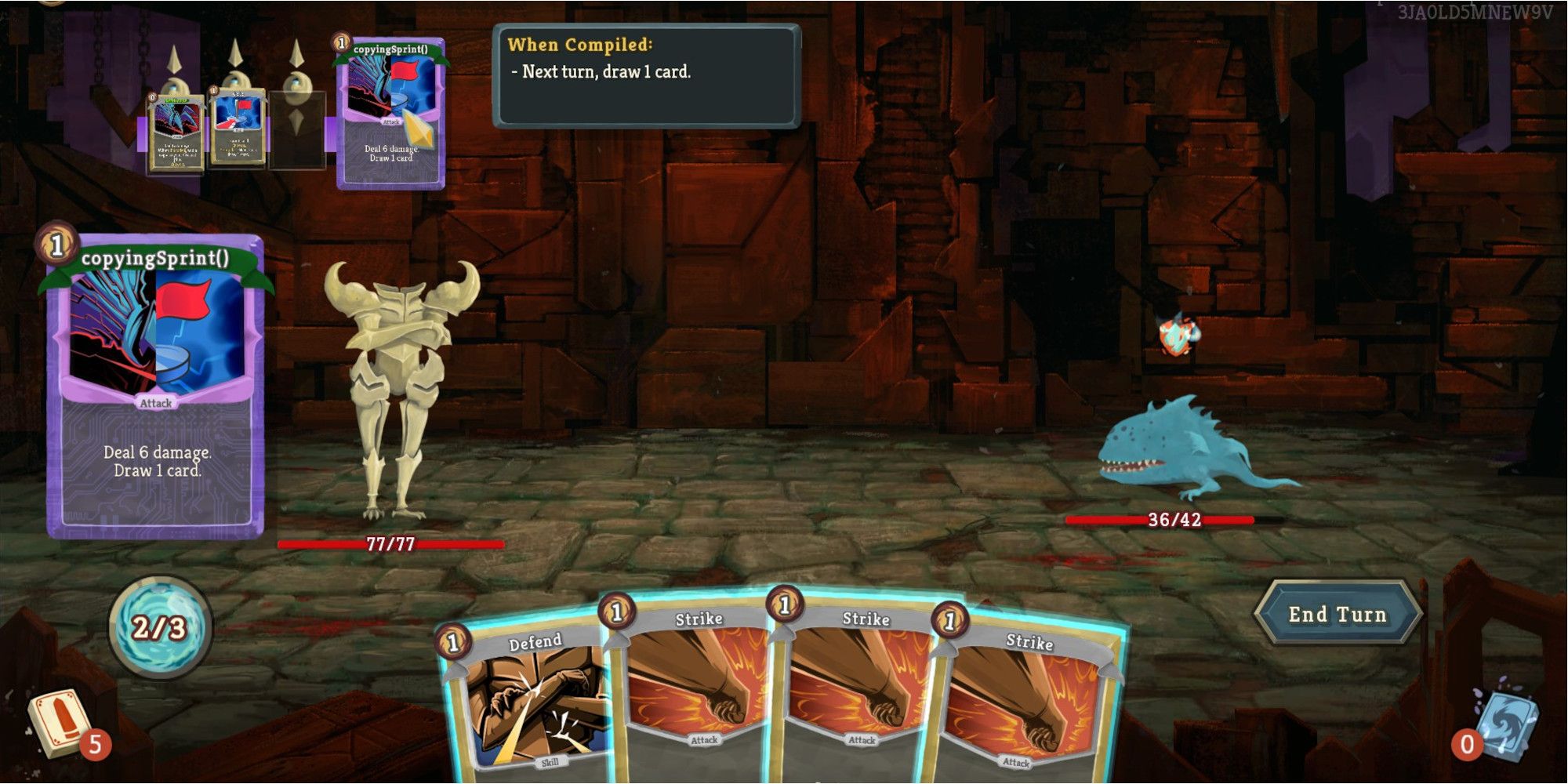 The Automaton lends a very adaptable play style to the new campaign with its special ability: Compile. Certain cards will have Encode. Once played, they will be compiled. Once you’ve played three Encode cards, they will produce a new card with all of their abilities combined, which will be added to your hand.

These compiled cards last for the rest of combat, unless otherwise stated. This ability gives the player a lot of control over their deck and build. Be careful, though: rarer cards often come with Compile Errors, which have dangerous negative effects. 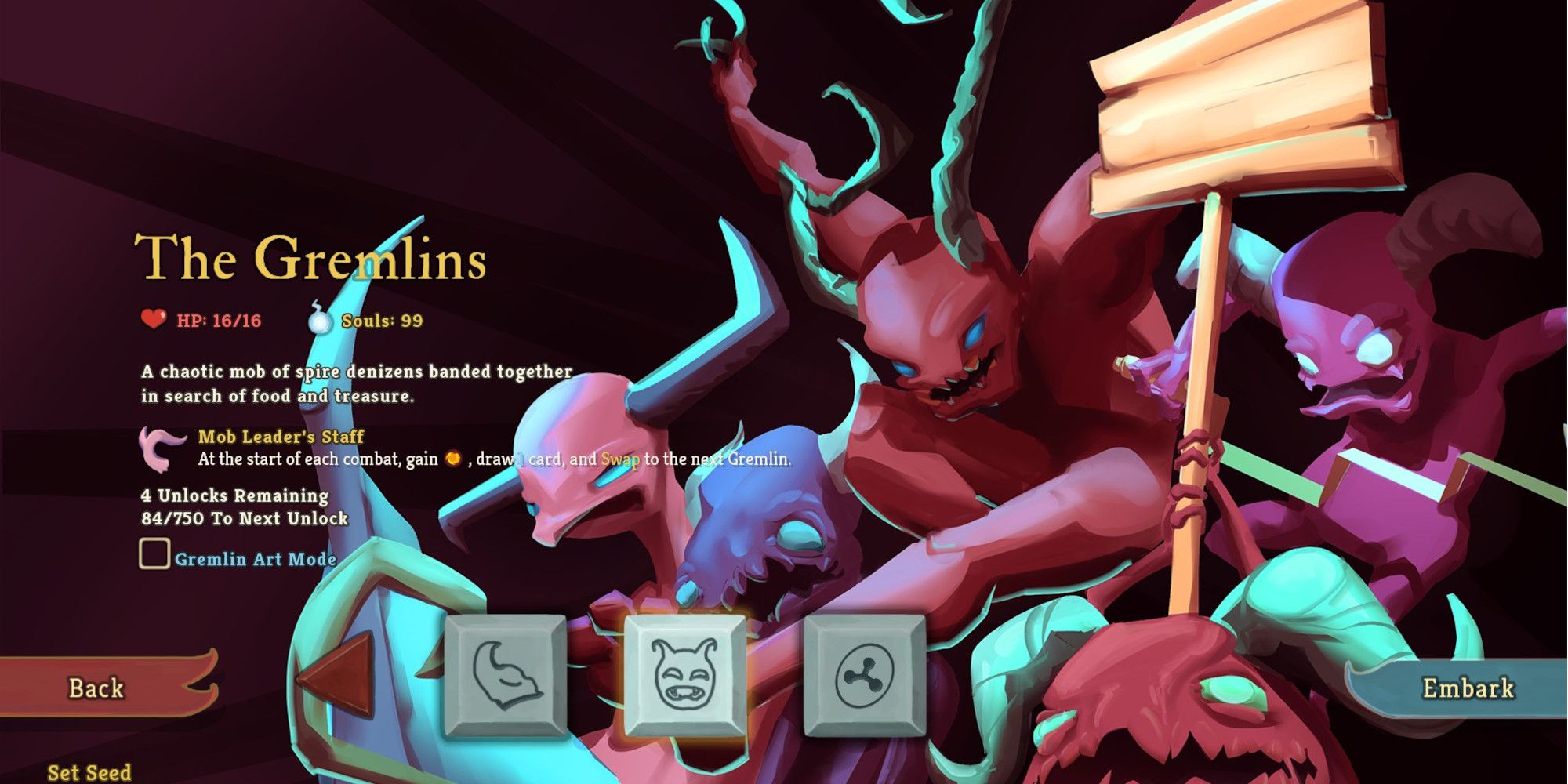 The first non-boss villain character, The Gremlins adds an interesting layer of gameplay to this brilliant strategic title. Rather than relying on a single, powerful character, you must manage five minor characters with their own special abilities:

Cards will allow you to rotate between your gremlins as needed. Each gremlin has a very small amount of health, though, and once it reaches zero, that gremlin will be removed from your party until you Rest.

1 Snecko: As Tricky To Play As It Is To Fight Against 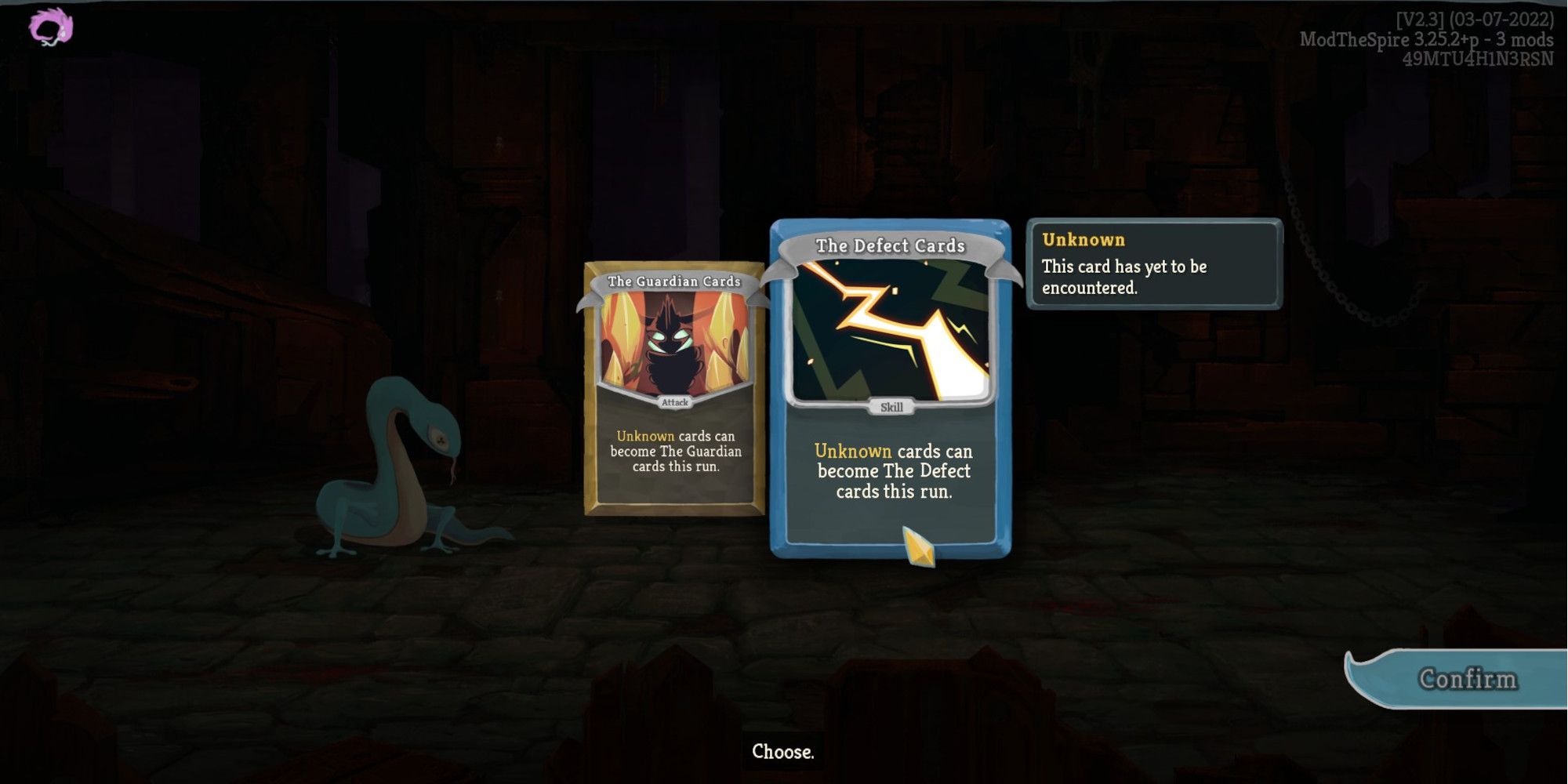 The final villain character in the expansion (so far) is the infamous Snecko. When you select it, you’ll immediately choose three other characters at random. These characters’ cards will be added to an invisible pool that your Unknown cards will draw from. Unknown cards are randomized each time they’re drawn. They are sometimes filtered by rarity, cost, character, type, etc., but are otherwise completely random.

You can identify Unknown cards at campsites which will keep them from changing. Snecko can also muddle the cost of its own cards, offering an interesting challenge.