EN Publishing recently announced War of the Burning Sky 5E #11: Under the Eye of the Tempest, a fantasy adventure module for characters of 19th level and higher for the fifth edition of the world’s most popular tabletop roleplaying game. The module is available now in PDF form at DriveThruRPG for just $9.99.

Under the Eye of the Tempest is the 11th module in the War of the Burning Sky series, with the official EN World Morrus-penned blog post announcement calling it the “penultimate” adventure, which may mean it’s the final one in the series. Morrus adds in another post that the adventure is “situation specific”, and could easily be played as a stand-alone adventure where ever your campaign could incorporate “a mile-long living airship”. And if you haven’t yet played the War of the Burning Sky series, you can find the entire line for D&D 3.5, 4th, and 5th editions also on DriveThruRPG.

Picking up after the events you encountered in Sleep, Ye Cursed Child (#10), Under the Eye of the Tempest your characters must prepare to mount a defense of the coastal town of Seaquen against the Tempest, the mile-long living airship of Pilus. Seaquen is the home of the Lyceum Academy, and Pilus has come to destroy how old rival mages there, unless you can stop him. If your characters have journeyed through the ten previous adventures, the events that unfold in this one seem to be a fitting possible end and achievement of having survived to reach the level of master adventurer.

If this adventure has pinged your interest in wanting to play the series from the beginning, you can find the War of the Burning Sky Campaign (GM-only) Guide here, and the Player’s Guide with character options and background material here. Both supplements are available in full-color PDF and print-on-demand softcover versions. 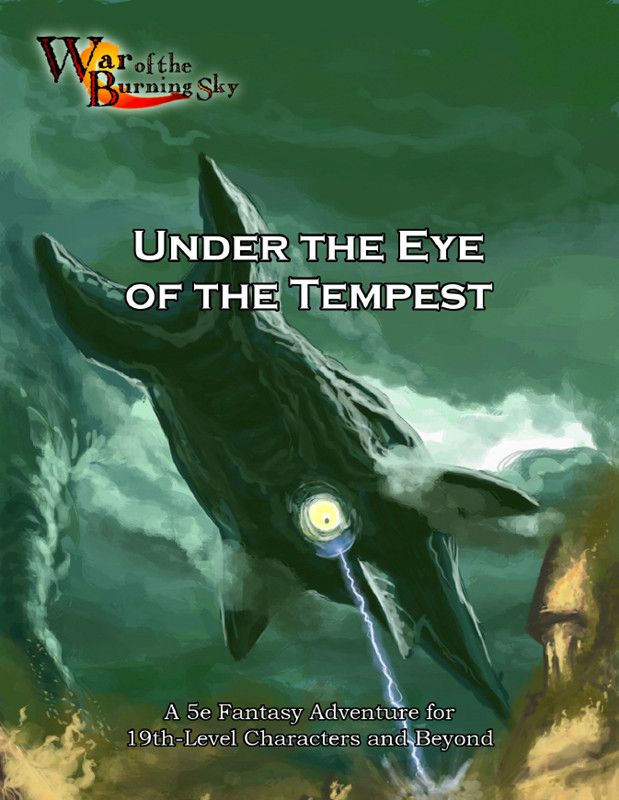 And in case you missed it, EN World’s Enchanted Trinkets II for D&D 5th Edition Kickstarter is currently in play. This compilation of minor magical items includes 53 new Trinkets to stock your characters with, such as “clockwork calendars, ever-shifting maps, plague doctor’s masks, sourberries, monk’s combat bracers”, and more. The project has of course fully funded, and as of this writing has 14 days left to go.