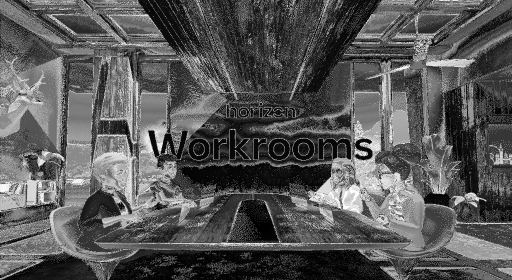 The new service launches as an open beta testing release today free to use on the Web over video call or embodied in Oculus Quest 2, with the latter being the only entry point requiring a Facebook account at launch. The software supports up to 16 people in VR together and up to 50 people total when adding in those calling in over video.

Horizon Workrooms is Facebook’s first software built from the ground up for controller-free hand tracking, and it is also the first released to headset owners to use their physical surroundings for added functionality. For example, the creators of the service include a whiteboard writing feature that flips an Oculus Touch controller around, so holding the base like a pen turns it into a writing instrument when pressed against a physical desk. Facebook calls this “mixed reality,” with the desk’s physical surface and keyboard either visible in a passthrough view from the headset’s cameras or re-skinned with virtual content.

At launch, some Mac keyboards and the Logitech K830 bluetooth keyboard can be tracked and their placement shown in VR. Facebook’s new Oculus Remote Desktop application runs on PC or Mac to show one monitor at a time to the user. Assuming your keyboard can be tracked (Facebook says it is working on adding more) other people in the virtual room can see the location of your keyboard but they can’t see your screen unless you cast it onto a wall for everyone to see.

Workrooms also pushes Quest 2 to its computational limits in new ways with the passthrough features presented alongside the latest version of Oculus avatars driven by impressive spatial audio that incorporates reverberation. For example, you can pinpoint exactly where someone is seated in the room without looking at them, and you can even tell whether they’re facing you or a whiteboard.

People using Workrooms are required to adhere to Facebook’s “Conduct in VR Policy” that prohibits “bullying” and other behavior. Company representatives prepared a document explaining that “Workrooms will not use your work conversations and materials to inform ads on Facebook. Additionally, Passthrough processes images and videos of your physical environment from the device sensors locally. Facebook and third-party apps do not access, view or use these images or videos to target ads. Finally, other people are not able to see your computer screen in Workrooms unless you choose to share it, and the permissions you grant for the Oculus Remote Desktop app are only used for the purposes of allowing streaming from your computer to your headset.”

Rooms can be set up in different seating arrangements to focus around collaboration, conversation, or presentation and the Workrooms web app offers a place to “capture notes and action items while you’re in a meeting, share links and files, and chat with your team. You can also sync your Outlook or Google Calendar to make it easier to schedule meetings and send invites.”

The software, or future versions of it, may represent an existential threat to a number of startups and indie developers ranging from work-focused Spatial and Immersed to Virtual Desktop and Bigscreen.

“This is not as good as being physically together, but it might be the next best thing,” Bosworth said.