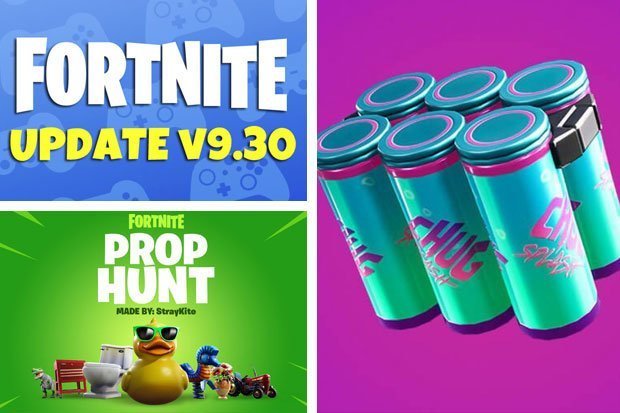 The new Fortnite update v9.30 is releasing today, June 18th, and fresh patch notes should be dropping too ahead of some Fortnite server downtime to roll out the update.

Official Patch Notes normally drop twenty minutes before downtime begins, which is scheduled to start at 9am BST this morning.

We’ll also be sure to update this page throughout the day as more new discoveries are made from the latest game-changing update.

The above is a reference to the new Chug Splash item, however, it’s still a little unclear exactly how the item will be used. The description does seen to suggest it’s more of a squad-based item, so if you love squad based LTM’s, keep watch for more details.

There had been some suggestions of a new Flare Gun, as seen during the Summer Block Party videos, but, this appears to have been quashed by Epic Games senior public relations representative Nick Chester. In response to a Dexerto article on Twitter suggesting the weapon could be coming, Chester simply replied “No”.

Though it wasn’t mentioned, it’s worth noting that the team recently warned against any purchases in the lead up to downtime, writing:

“Real money purchases will be unavailable 1 hour before downtime begins while we perform additional maintenance.”

With a whole bunch of new leaked skins set to come with the update, it’s probably best holding off using your v-bucks anyway, since you might see something brand new in the shop after the update.

In the meantime, stay tuned for those official patch notes, very shortly.