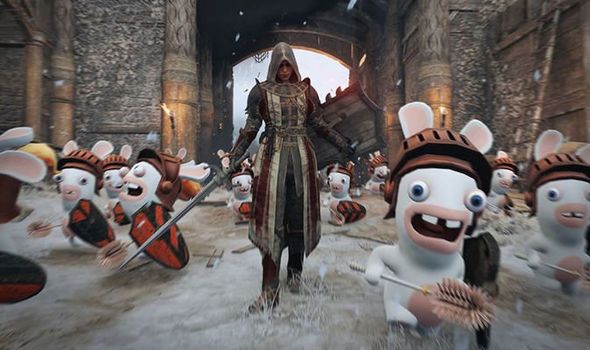 When it comes to April Fool’s Day, plenty of gaming communities join in with their own jokes.

Many were expecting Epic Games would be leading the charge with Fortnite Battle Royale this year, seemingly a good fit for a prank.

However, it doesn’t appear that anything big has been found by fans, with nothing being teased by the official Fortnite social media feeds either.

So it seems that this year, Epic Games is skipping the eventful day and letting others dominate when it comes to in-game jokes.

There were also hopes that something was being planned for another massive Battle Royale title, Apex Legends.

The free-to-play game has proven a break-out hit for Respawn Entertainment, making an immediate impact on Twitch.

But fans have also found that there hasn’t been much happening when it comes April Fool’s Day either.

There is still time for things to change but until fans find something or messages start being sent out, other games have been leading the charge.

For Honor needs to be mentioned as it has undergone some serious changes today.

Ubisoft’s Brawler has a special mode available to play right now that adds some rather different characters to the game.

For one day only, according to the development team, For Honor fans can sign in and battle raving Rabbids on PS4, Xbox One and PC.

This special event will only be live for a very limited amount of time and is one of the best examples of how to celebrate April Fool’s Day the right way.

The Rabbids event has been live for some time and shouldn’t end in the UK until the early hours of April 2.

“The Rabbids are taking over for the minions in a special, 24-hour For Honor April Fools’ Day event,” a message from Ubisoft confirms.

“Starting March 31 at 9PM PDT, and ending April 1 at 9PM PDT, players who jump into For Honor during the event will earn a melee pack as a reward.

“This event comes as a part of For Honor’s Year 3 content, called Year of the Harbinger, which also recently saw the addition of The Black Prior to its roster of more than 20 Knights, Samurai, Vikings, and Wu-Lin.

“New content will continue to roll out throughout 2019, including additional seasonal events.”

And For Honor isn’t the only Ubisoft getting the April Fool’s Day treatment this week. A new in-game event called Rainbow is Magic is currently live on all platforms and will be available to play until April 8.

This includes rescuing a VIP Teddy Bear from nefarious captors in a toy-sized plane, something that all R6 have been clambering to do.

“For this critical task, choose among 4 hand-picked Operators who will “blend” into this sparkly environment wearing their plushie outfits to get the job done: Blackbeard and Montagne as attackers, Smoke and (of course) Tachanka as defenders,” a message from Ubisoft confirms.

“That’s not all! You can also pick from nine proud toy soldiers to complete your dream squad: Ash, Thermite, Thatcher, Sledge, Castle, Kapkan, Bandit, Frost, and (of course) Recruit!

“Remember that only through the power of your imagination can you save the teddy bear.”