Fortnite Chapter 3 has landed and with it comes a whole slew of changes, updates, upgrades, and silly shenanigans. A long-running battle royale game such as Fortnite develops a new meta each and every season, let alone a brand new chapter. Epic Games have completely refreshed the game and this is most evident in the brand new weapon and item pool.

Pretty much every weapon you were used to in Chapter 2 has been done away with, instead opting for a more simplified weapon pool, something that creates a more even playing field. While mini and large slurp juices, bandages, and medkits stick around, Chapter 3 also shakes up the item meta as well. Here are the best new weapons and items that you should get your hands on right away. 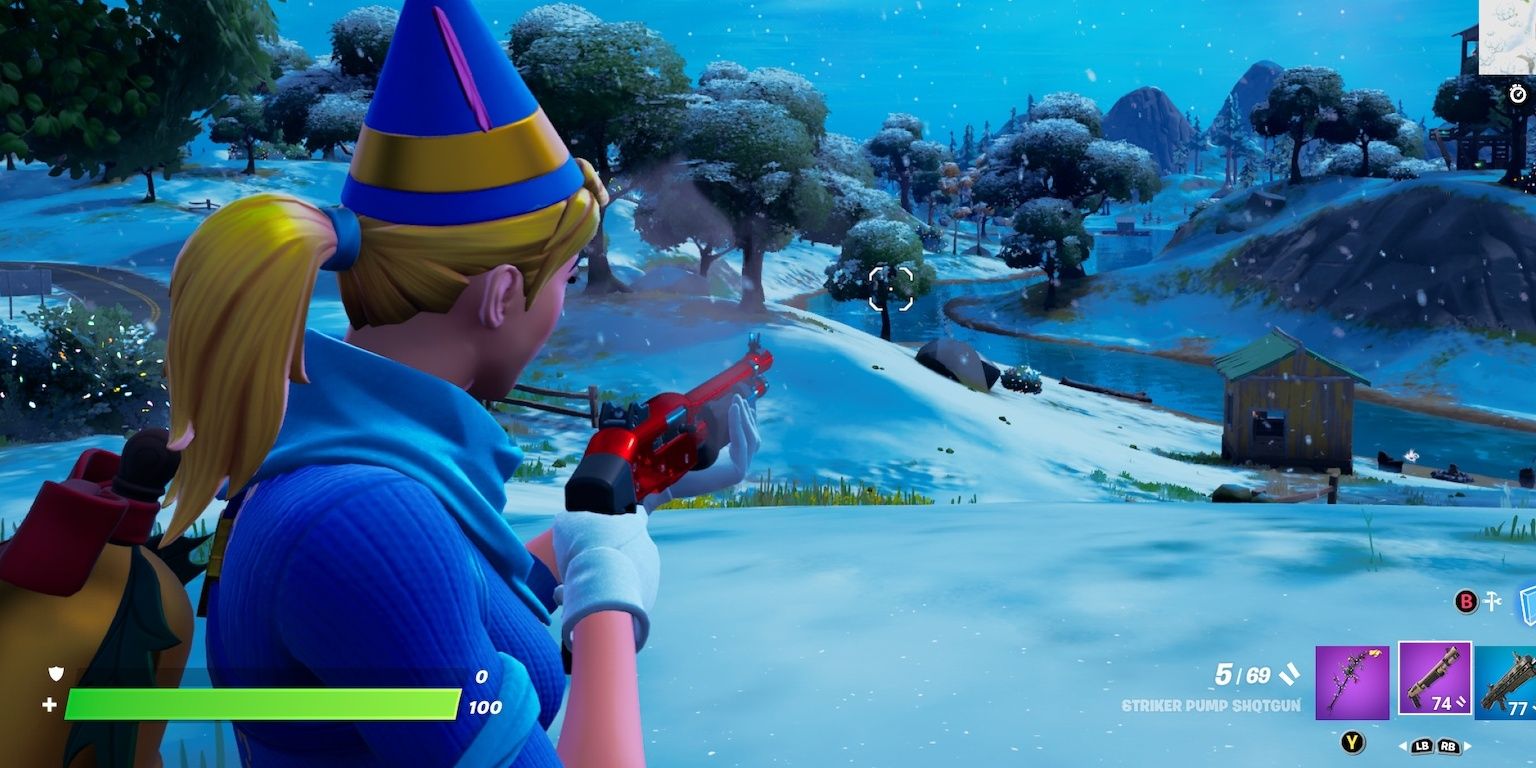 For all intents and purposes, the new striker pump shotgun is very similar to previous chapters' shotguns. This slow-firing shotgun can deal a decent amount of headshot damage and body damage but ultimately depends on the pellet spread. Shotguns in general have been nerfed a lot in this new chapter.

The striker pump shotgun does have a sleek and clean design and no doubt many quick build players will like this weapon because it can often make or break a building edit battle. This new shotgun can hold five shells at once in its full capacity. 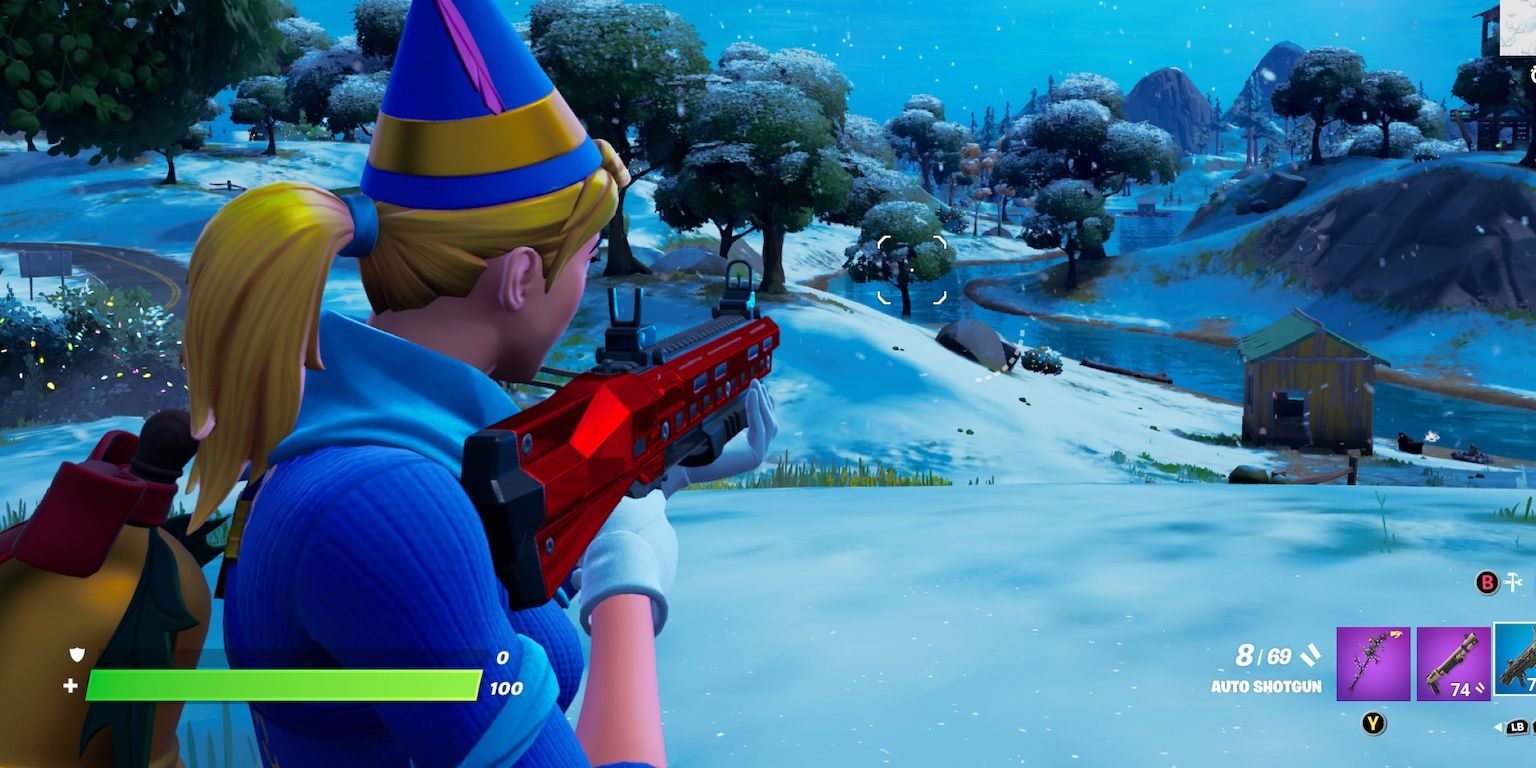 To balance out the slower striker pump shotgun, Epic Games has also added a brand new auto shotgun to the chapter. This new auto shotgun, while not as overpowered as the drum shotgun from past seasons, can still pack quite a punch, especially if you land all your shots.

While the overall damage seems to be lower in comparison to the striker shotgun, the fact that it can hold eight shells at full capacity means you can stay on your target in a close-range or build battle. 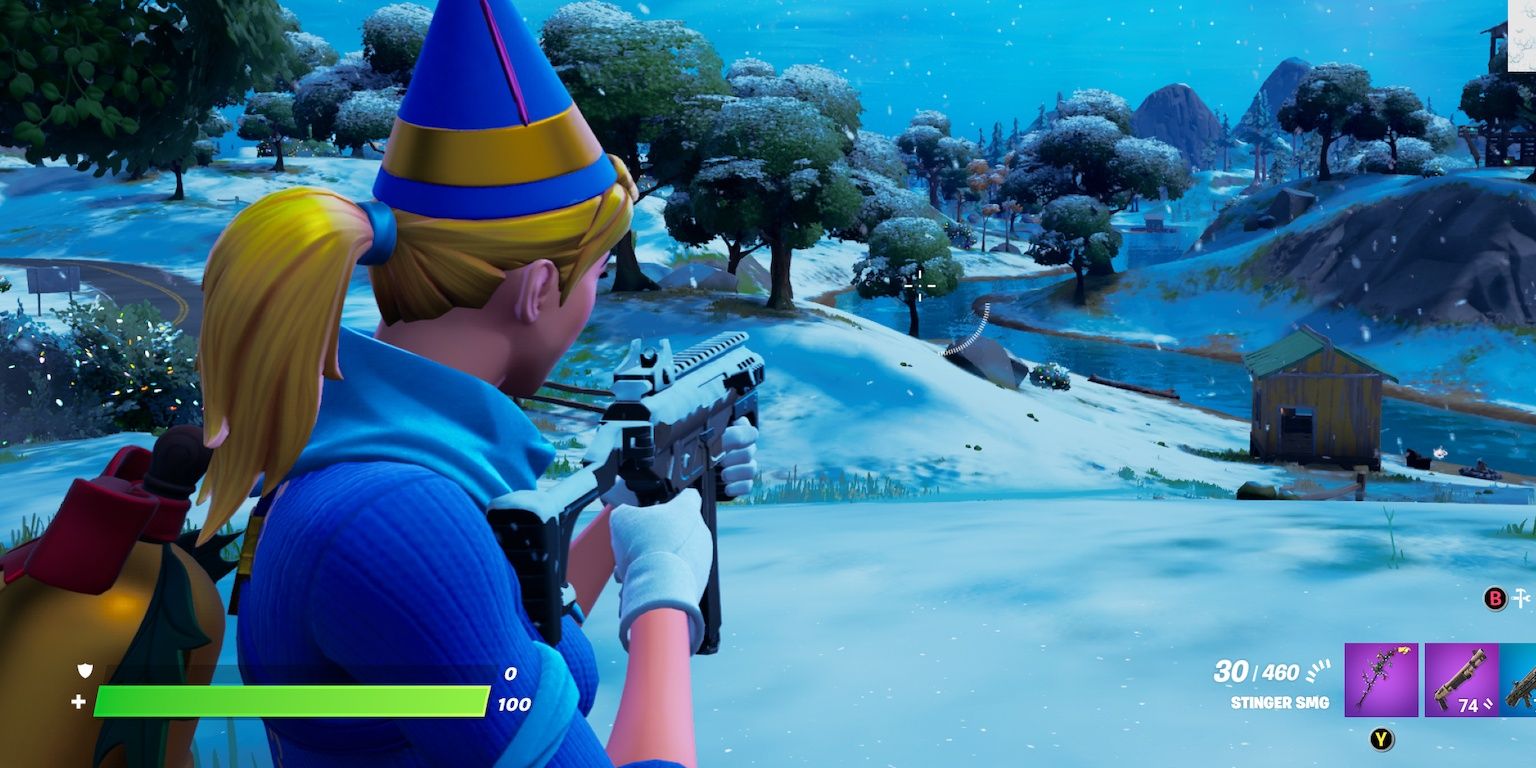 While the chapter is still in its infancy, it's quite clear that the brand new stinger SMG might be the new close-range meta weapon. SMGs were often passed by in favor of the various shotguns in the last chapter, however, this new stinger version is an absolute beast.

It can generally output around twenty damage on a basic shot, but because of its rapid-fire nature, it can quickly devastate both opponents and their builds. You will see more players equipping this weapon in the early parts of chapter 3 instead of the traditional shotguns. 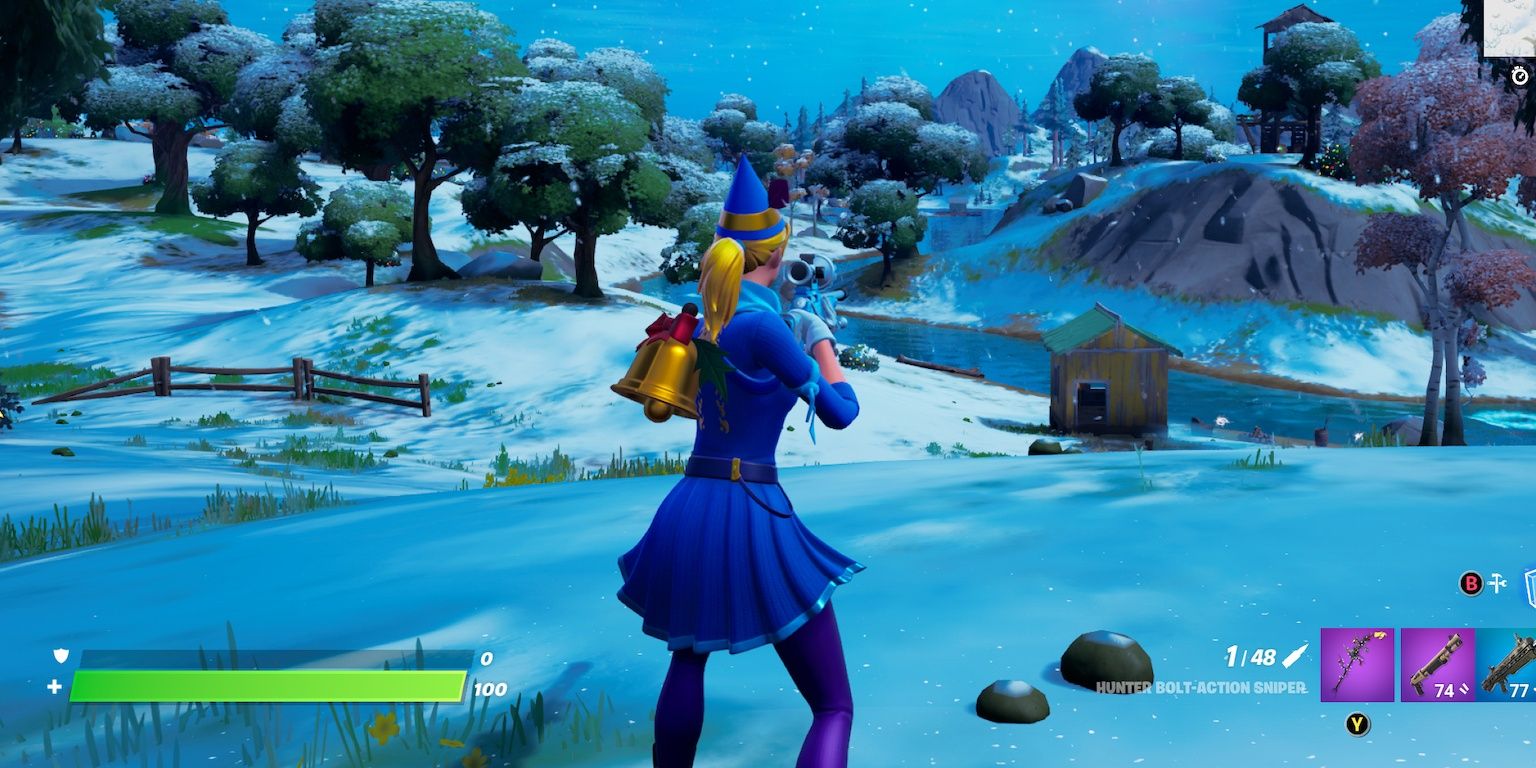 Sniper rifles were in and out of the weapon pool so often in chapter 2 so the fact that chapter 3 now has a new one is pretty remarkable. This bolt-action sniper is quite similar to past sniper rifles but has one major advantage. This sniper, despite being bolt-action, has three rounds per clip.

If you place a nice headshot on an enemy then you can easily take them out with body damage typically doing less than a hundred. Plus, this sniper rifle comes in every variety, from common to legendary. They also drop frequently from loot chests. 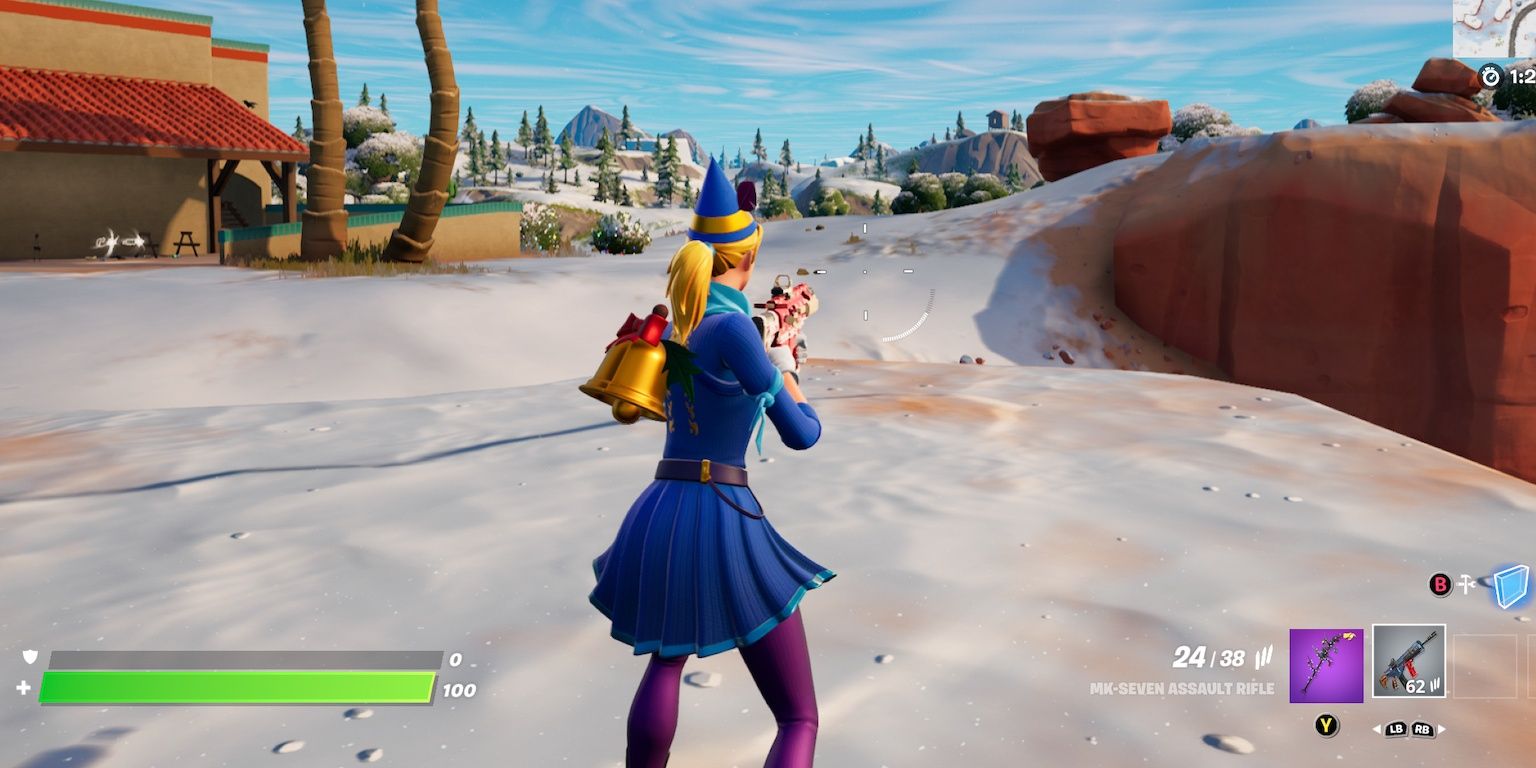 Easily the biggest weapon change in chapter 3 has to be the addition of the mk-seven assault rifle. On the surface this assault rifle looks like any other, however, once you pick it up and aim down sights, you quickly learn that it moves into first-person.

Aside from sniper rifles, the mk-seven is one of the very first weapons to bring a new perspective. This assault rifle can devastate opponents and builds from a distance, but there is some decent recoil to contend with. As they say, practice makes perfect. 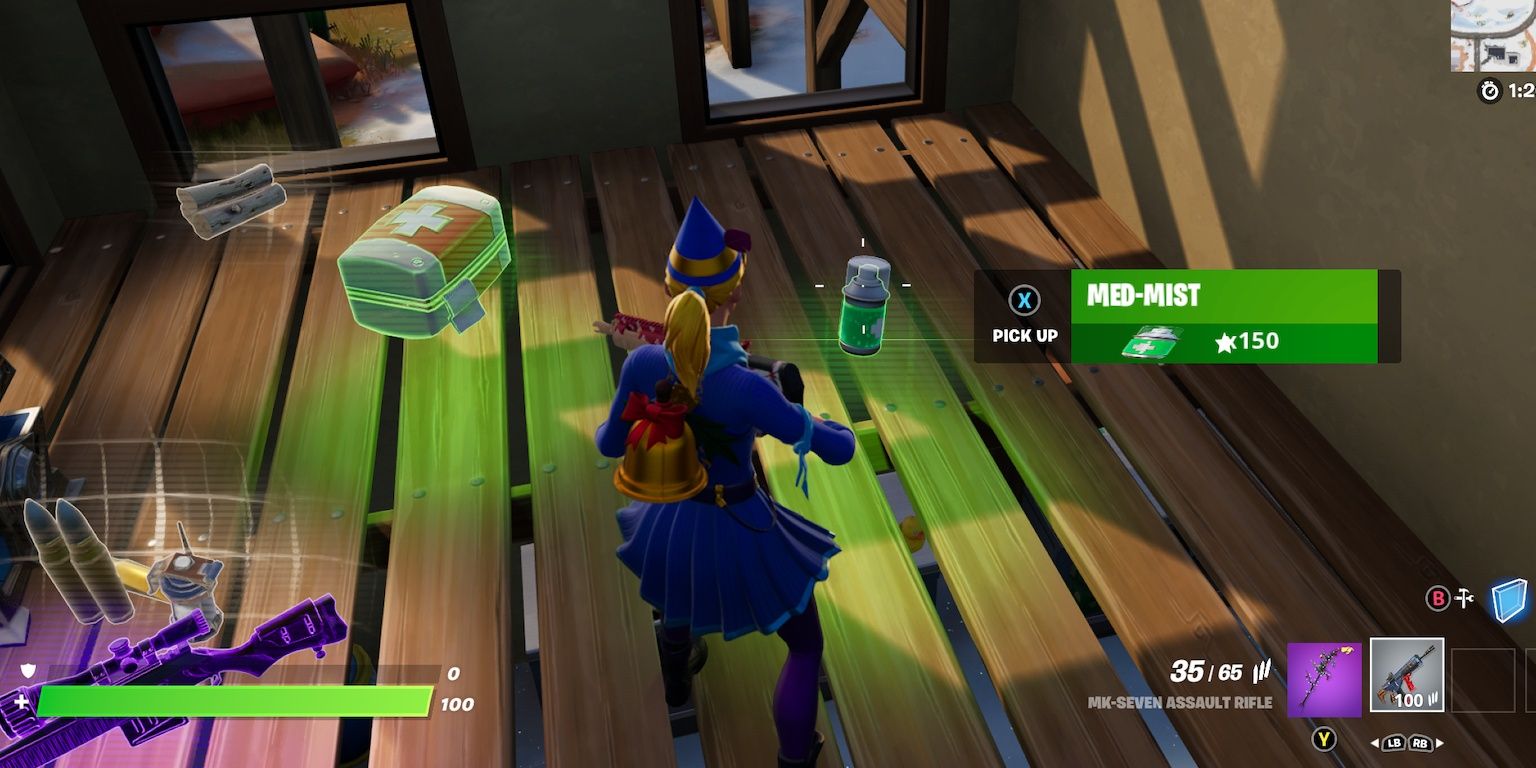 One of the new healing items to arrive in chapter 3 is med-mist. This sprayable item is essentially a med-kit that can heal 150 health in total, however, it does take some time to use. What makes the med-mist so useful is that it can be used for as little or as much healing as need be, even on squadmates.

By holding down the designated button, an area of effect healing mist slowly raises your health back to 100. If you find yourself running in the storm, simply whip out the med-mist and heal yourself on the go. Considering the med-kit takes ten full seconds to heal up to 100, the med-mist is a great, efficient alternative. 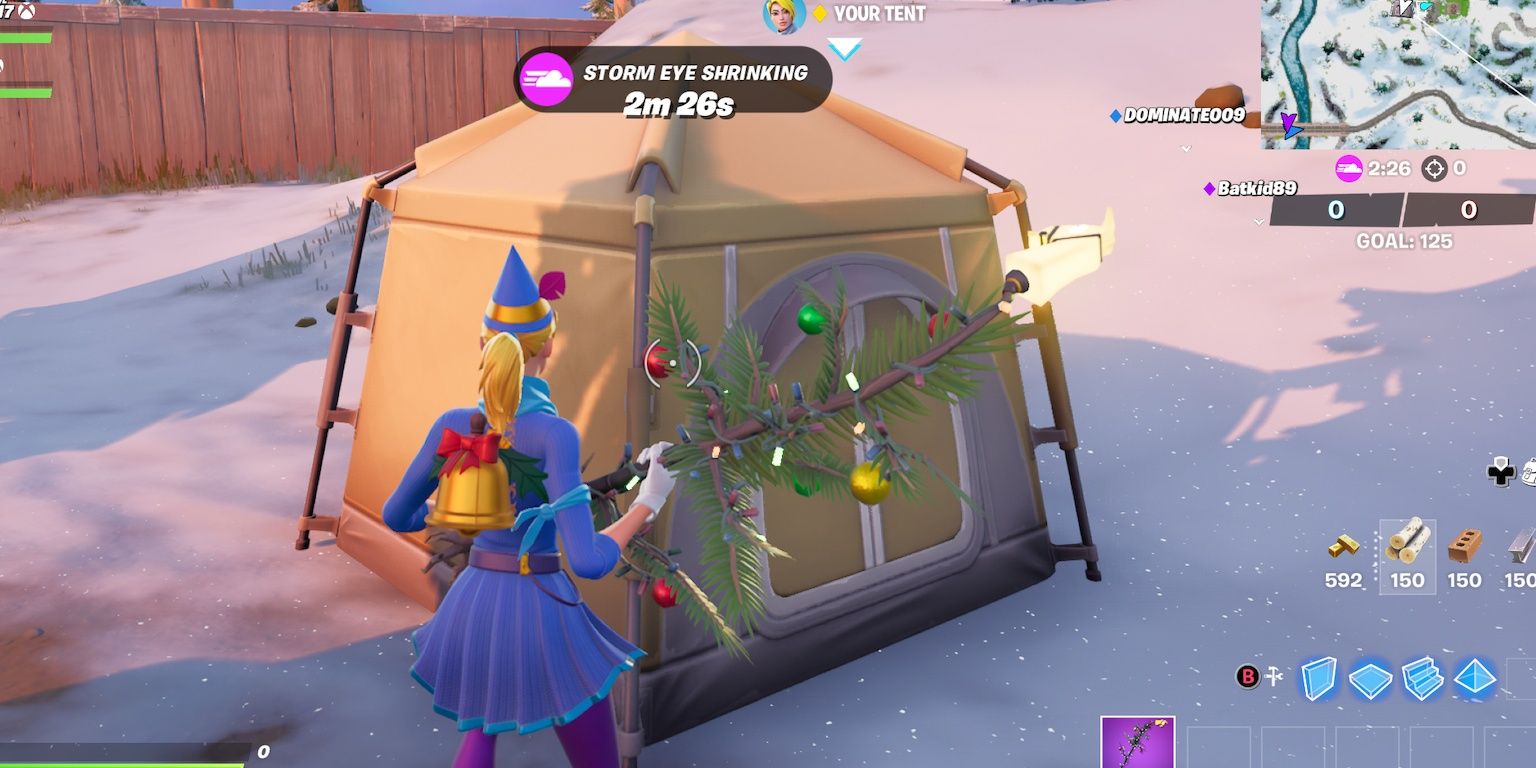 The humble tent might just be one of the more creative items ever added to the Fortnite loot pool. The tent is a one-slot item that can be thrown down almost anywhere to create a resting station and a storage area. Yes, you can store weapons in the tent to bring with you into your next game.

The tent is the first item in the game that allows for the crossover of weapons between games. So, if you find yourself armed with that legendary hunter bolt-action sniper but don't want to find it again, simply plop down a tent and store it for your next game. Only time will tell if this item is too overpowered for the long-term meta.