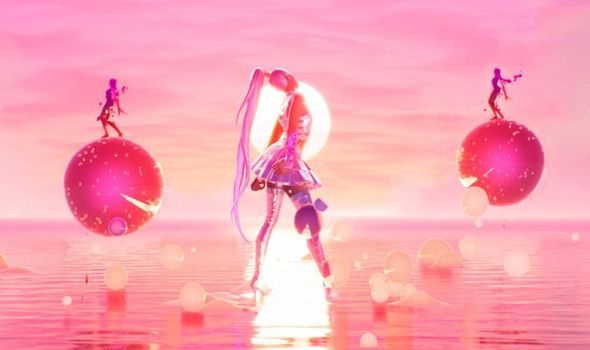 Fortnite has just hosted its latest live event, this time headlined by pop superstar Ariana Grande. Battle Royale fans were treated to the first performance on the Fortnite Rift Tour on Friday, which took gamers on a magical and colourful journey alongside the Thank U, Next singer. If you missed out on the first Fortnite Rift Tour performance then don’t worry, Epic Games will be hosting encores of the season 7 Ariana Grande live event this weekend.

If you want to tune in to the Fortnite live event then Epic Games advises players to head in-game up to an hour early.

The Fortnite makers said: “Ensuring that fans around the world can catch the Rift Tour, the experience spans five showtimes over three days.

“Before Ariana’s arrival, the Rift Tour kicks off with Fortnite-themed experiences — pairing popular tracks with moments based on elements from the game.”

Anyone that attends one of the Rift Tour events will be treated to a free Cuddly Cloudcruiser commemorative Umbrella.

While the first wave of Rift Tour Quest rewards is available until August 8.

The rewards on offer are the Cosmic Cuddles Loading Screen, Rift-sterpiece Spray and Cloudy Kitty Emoticon.

While, if you want to get kitted out for the Fortnite season 7 live event, the Fortnite Ariana Grande skin and Piggy Smallz back bling is available in the Fortnite Item Shop.