Frostpunk lets you play different scenarios, like “The Refugees” or “The Last Autumn.” However, the game’s main storyline happens during “A New Home,” a scenario where you’ll be in charge of leading a group of Londoners into a new place where they’ll build a new city to survive the area’s challenging conditions.

This scenario lasts around 48 days, during which you’ll have to explore, save people from starvation or the weather, rescue people from the outside, and make all sorts of hard decisions. Eventually, you’ll have to give some purpose to your citizens, so they have something to live for. To do that, the game offers you the option to follow one of two paths: Order or Faith.

These paths will open purpose trees, meaning the laws you can choose from in the Book of Laws will vary depending on your chosen path. While you can survive following either one of these paths, some differences between the two of them could make things easier or more challenging for you, depending on the one you choose. Here are the advantages and disadvantages for both of them.

Differences Between The Two Paths 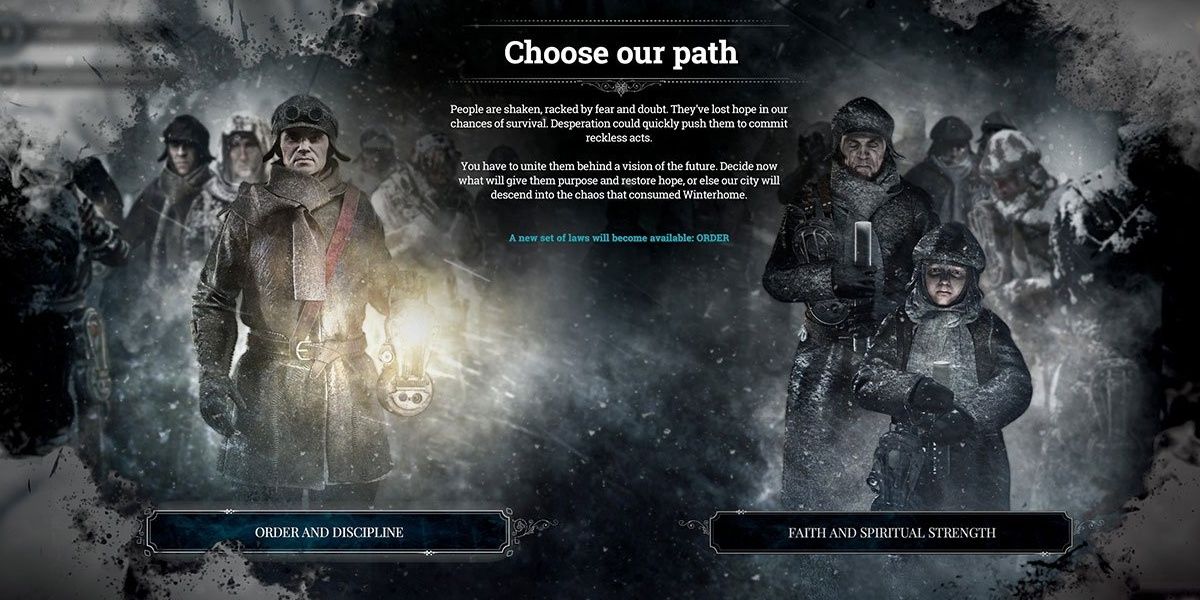 However, the Faith path focuses on giving your people purpose through spirituality and good intent, so you’ll have available laws that will make people feel good and mend their ways. 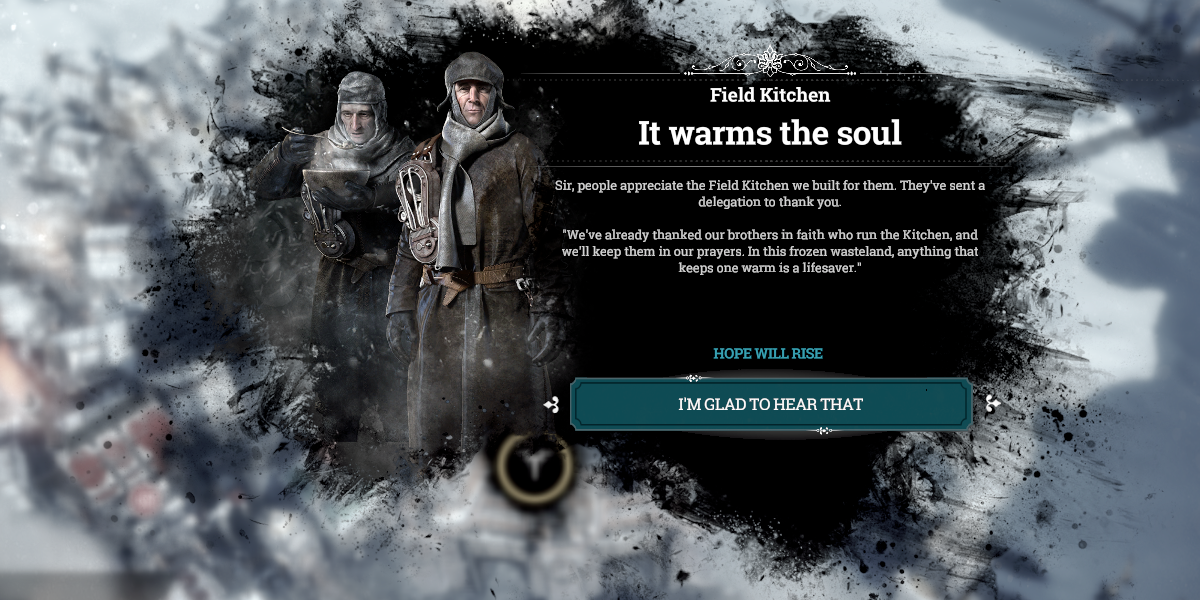 The main way you’re going to be able to keep your citizens warm is by researching technologies in the Workshop that focus on heating. Things like building Steam Hubs, upgrading the Generator efficiency, or having buildings with heaters will be essential to surviving the final storm.

Still, there’s only so much you can do, and the further a building or house is from the Generator, the colder it will be. However, if you’re following the Faith Path, there’s one building that can fix this heating issue — the Field Kitchen.

You’ll have to sign the Field Kitchens law before building this place, but once you do, you can employ workers, engineers, or children to serve hot meals during the workday to help people stay warm.

Basically, what Field Kitchens do is raise the heat level of all the work buildings that are in its area by one. To do so, this building will consume one food ration per working hour. 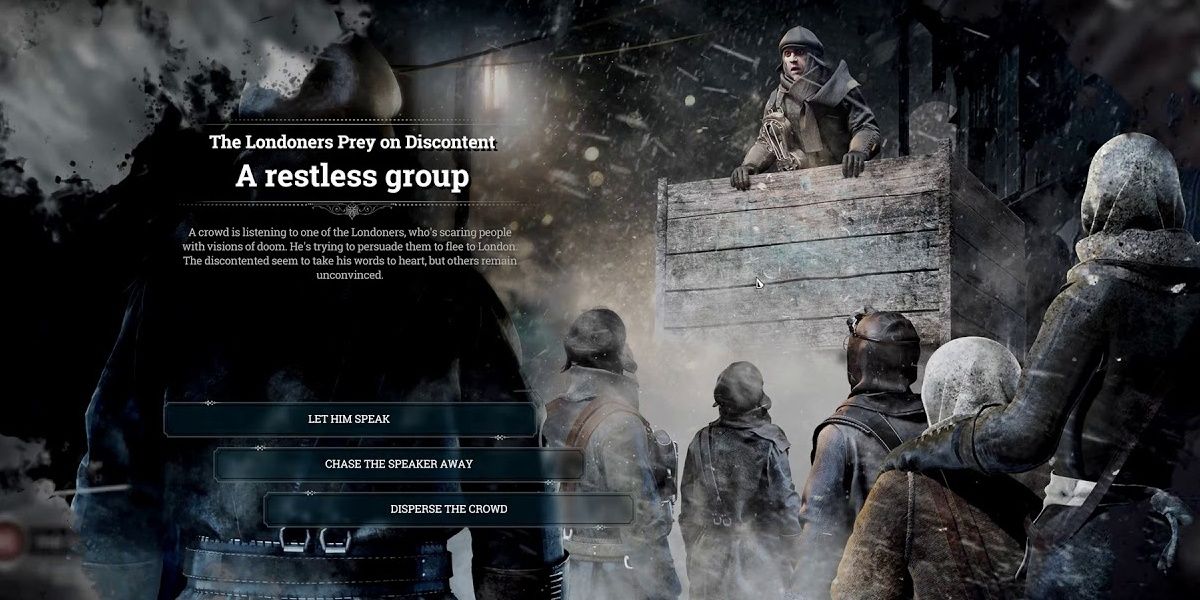 Faith, however, is a better path to follow if you don’t know how to keep your Hope levels high enough. While the Order path only has one building that can deal with Hope (the Propaganda Centre), the Faith Path has many, like the House of Prayer or Shrines. 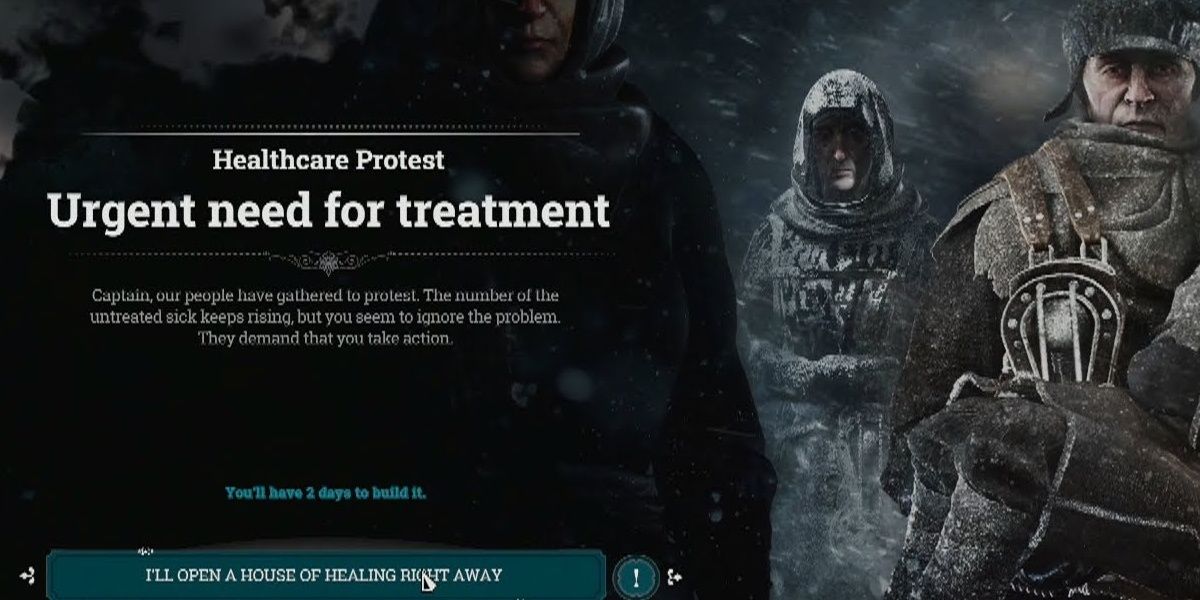 Besides gathering resources and finding food sources, you’ll have another big problem to deal with: sick people. Since this game takes place during a Volcanic Winter, temperatures are super low, and people will start to get sick very soon if you don’t provide them with a warm environment (either at work or in their homes).

Having a lot of sick people can complicate things very quickly; they’ll need to be treated as soon as possible or they’ll become gravely ill. At that point, you can build a Care House to take care of them or cure them at Medical Posts at the risk of leaving them as amputees. Not only that, but health buildings require engineers to operate, and finding engineers is a lot harder than finding workers.

That’s why following the Faith path is a good idea since you’ll be able to build a House of Healing. This building costs 35 wood and ten steel; you’ll also need to sign the House of Healing law.

Once all of that is done, you will be left with a hospital-type building that doesn’t require engineers and can heal both the sick and the gravely ill. However, they’ll heal them at a slightly slower rate than an infirmary would. 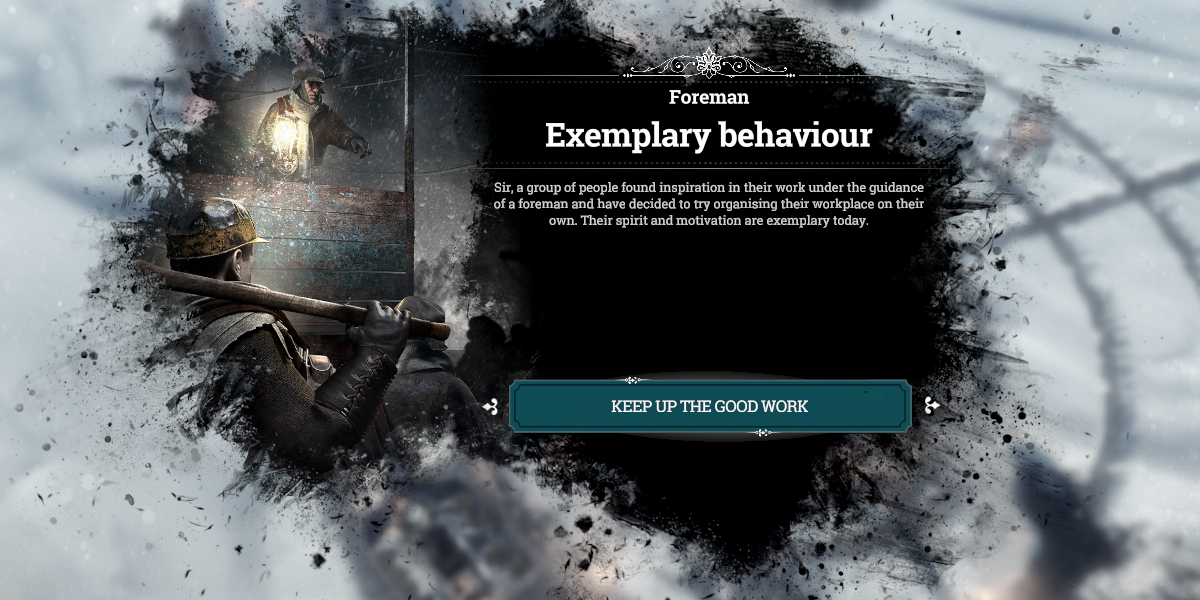 In Frostpunk, you need resources to survive. Coal keeps the Generator working, wood and steel let you research new technologies and build new buildings, raw food and food rations to prevent your people from starving to death. As you can see, everything is needed, and the way of gathering such resources is by having people working in different workplaces.

This is where the Order path shines since it lets you use Foremans. These people will ensure that everyone is working “to the best of their ability,” meaning having a Foreman will increase the efficiency of nearby workplaces by 40% for 24 hours (it has an 18 hours cooldown).

The best part is that this boost affects humans workers as well as Automatons (which is huge considering these robots will only work at 60% efficiency unless you upgrade them, and even then, you get a 10% increase with each upgrade.