Games Inbox: What is the worst Elden Ring boss? 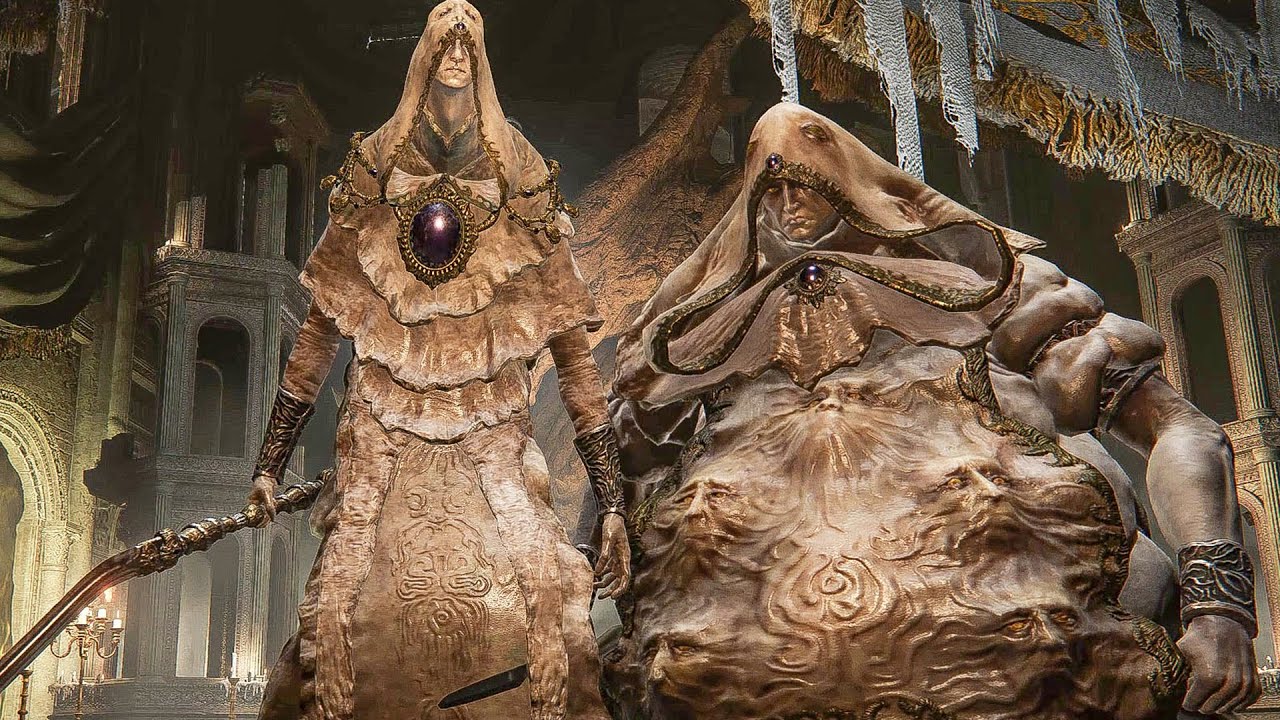 The Monday letters page hopes Lucasfilm Games starts to make original titles as well as sequels, as one reader enjoys Halo on the Steam Deck.

Worst of the worst
Interesting Reader’s Feature about Elden Ring being the worst Soulsborne game. I’d have to say I do agree with a lot of the points made, although I’d still put it ahead of Demon’s Souls and all of the Dark Souls games. It’s nowhere near as good as Bloodborne and Sekiro: Shadows Die Twice though, which for me are absolutely near perfect.

One of the major problems is the bosses, which usually end up being annoying and cheap, rather than clever or enjoyable. Maliketh, Astel, the Fire Giant, and the dreaded Malenia are all absolutely infuriating to fight against and waste their otherwise cool designs and interesting set-ups.

My absolute most hated though, and very possibly the worst boss From have ever done, is the Godskin Duo. It’s kind of like the inverse Ornstein and Smough from Dark Souls 1, as while they offer a daunting but fair challenge the Godskin Duo are just impossible if you’ve been focusing on melee and still highly reliant on luck and memorisation if you’re a magic user.

To me, it feels like something is just out of tune in the way From usually make their bosses. Maybe they felt they were going too soft with the rest of the game, especially the open world, but I’ve barely enjoyed any of the bosses in the end and that’s really spoilt my enjoyment of what should have been the best part.
Cevin

The final step
I have to say that since coming back Lucasfilm Games seem to be doing all the right things. Naturally their priority is Star Wars but they very quickly announced a new Indiana Jones game as well, which hopefully we’ll see soon, and now they’ve announced a new Monkey Island. Not just that but they’ve gone to the trouble of getting the original creators back for it and, as far as I can see, given them free reign to do whatever they want.

There are lots of other classic franchises I’d like to see them bring back, especially other graphic adventures, but the next step is one I’m not really sure they’ll do: making new, original games.

The old LucasArts used to do this quite often but whether their new incarnation will I don’t know. I guess it doesn’t matter if they’re only going to act as publisher, since they still don’t make games in-house, but I’d like to see them have the guts to commission some big budget new IP from a respected developer. You can’t count it out and that’s great.
Endo

Start again
I don’t believe there’s anyway to rescue Battlefield 2042 at this point. The negativity has killed the game and the only thing worth saving from it is Portal, which they should release as a standalone game, probably free-to-play if they can avoid filling it with microtransactions.

EA are starting the next game for the worst of reasons but that’s the only way forward I think. They basically have to do the reverse of what they did with Battlefield 2042 and make a game that’s based on what people actually like about the franchise, and that means binning what exists now and that terrible Hazard Zone mode.

Bring back the normal modes, reduce the player count on maps, and put in a proper effort rather than the rush job that this was. It’s sad to see what’s happened to Battlefield but at the moment it deserves it all.
Locky

A renewed hope
I have always considered the Lego Star Wars games to be a bit overrated, so I purchased The Skywalker Saga with some scepticism. The change to a more traditional third person action game convinced me to give the franchise another shot. I don’t mind admitting the game has easily surpassed my expectations and I’m shocked it may end up in the running to be my favourite game of the year.

I’m a diehard fan of the original trilogy, with everything after being cause for frustration. For years I convinced myself the prequels didn’t exist, only for the sequels to come along and tarnish the franchise beyond repair. Who knew a Lego game could reignite my love for Star Wars.

I’ve never been more happy to be wrong. Hopefully the critical acclaim is reflected in high sales figures.
Anon

Old skills
As an older gamer fast approaching 52, I have been putting my awful skills at Returnal down to deteriorating hand eye/reflexes.

But I have just defeated Phrike after many runs, hours, and attempts!

This ranks as my best gaming moment since completing Ghosts ‘N Goblins or getting my first platinum on Two Point Hospital.

However (spoiler alert for a very old game) just as Ghosts ‘N Goblins knocked me down by sending me back to the start I have a sneaky suspicion that Returnal is going to get much, much harder!

What a game though.
Jowbullman

Reboot, I choose you!
Great Reader’s Feature about what games are likely going to get made into movies on the back of Sonic 2’s success. Crash Bandicoot is a given, there’s no point even arguing about it, and the others are all pretty likely too. I doubt any of them will be good but it’s not as if Sonic 2 is great either, it’s just not as bad as you’d expect. Which when it comes to video game movies is about as good as you can expect.

What I’m interested in seeing is if this brings about a second Pokémon film. It’s far from perfect but I think Detective Pikachu is a better film than either Sonic and the potential is obviously there for an infinite number of follow-ups.

It hasn’t happened though and I’m not sure why. It was profitable, as far as I understand, even if it wasn’t by as much as they hoped, so it’s not much of a risk to give it another go. The question is whether they feel the long gap justifies a complete rethink, maybe focus it on a normal trailer or a more direct adaptation of the cartoon.

I’d be fine with that to be honest. I get why they did it but the Detective Pikachu angle was always pretty weird and I don’t know how they’re going to handle it now that other Pikachus won’t speak. That’s going to seem pretty weird to non-fans, I would’ve thought.
Shakesman

Portable Chief
I just wanted to make mention of a possibly forgotten or missed reason as to why some players have been returning to Halo: The Master Chief Collection over the last month or so. Not sure how you could follow up, or find out exact numbers, but the Steam Deck has come out recently and there are quite a few people in r/SteamDeck having it run extremely well, nearly fully realised, in a portable form factor on the device. I know that I’m one of them!

I’ve dreamt about Halo on the go since I was 10, playing Combat Evolved on the OG Xbox, and Valve has helped make it happen! Along with whoever is working on EAC Linux compatibility over at 343 or Certain Affinity. Food for thought!
Alex

Mario for all
I was trying to think of a favourite family video game I’ve enjoyed playing over the years. Mainline Zelda and Mario games may look family friendly but to play them is something else again.

The only game in which family members needed no previous gaming knowledge are the Mario Party and Mario Kart games. These games I’d probably classify as my favourites, but that’s not saying much due to having not played many family games in general. Though there was the Harry Potter game series from the PlayStation 2 and GameCube era onwards, with simplistic but fun gameplay mechanics.

I am probably not the best person for family friendly games, but if Lego Star Wars is the basis for this Hot Topic then I definitely had nostalgic movie fun with The Lord Of The Rings Complete Trilogy on the Xbox 360. It was very clever in humour and is very pretty and graphically pleasing when recreating the world of Middle-Earth.

The classic Lego animation humour is there from what we all know and love, and the puzzles and adventuring is easy to work out and navigate with plenty of clues along the way to help you out. It also doesn’t take too long to complete each game individually and they’re very suitable for a quick and easy gaming session.

‘This looks strangely familiar!’ says Sam. ‘That’s because we’ve been here before, we’re going in circles!’ says Frodo was done in a very amusing scene, which had the game world shaped as a loop going over and through various puzzles on the way. Definitely recommended even now, as well as the Lego Harry Potter complete film series which may be even better.

These games are simple and fun, plus good to look at and have a laugh with mates or family members. The Super Mario Kart series is a must, especially the newest Super Mario Kart 8 Deluxe version. Basically, look around and there’s bound to be something for those family occasions, even if the above gaming titles don’t do it for you in particular.
Alucard

Inbox also-rans
I don’t know if anyone here has managed to watch the Halo TV show but it is absolutely not worth the effort of figuring out how to see it. It starts off okay but it’s now so far from the source material I don’t even know why they bothered. It’s also incredibly cheap looking. The Covenant are barely in it.
Ansel

Am I the only one that likes Dark Souls 2? Maybe it’s not the best entry but that doesn’t mean it’s actually bad and I can’t say I enjoyed it any less than the other two.
Panke

This week’s Hot Topic
The subject for this weekend’s Inbox was suggested by reader Snake, who asks what video game movie would you like to see in the future?

Inspired by the success of the second Sonic The Hedgehog movie, what new adaptations do you hope and expect to see in the future? Do you have any faith they’ll be better than normal for video game movies? Why do you think your idea would work and do you have a cast or director in mind?

Do you think Sonic 2 will end up inspiring a new wave of video game movies and how do you think announced, but not yet seen, films like the new Super Mario and Metal Gear will turn out?