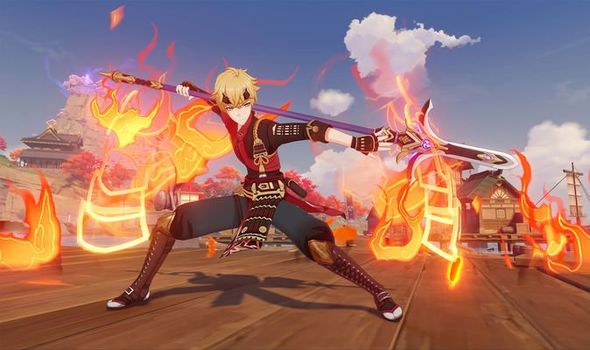 Developers Mihoyo is bringing Hu Tao back into the mix with its latest 2.2 Genshin Impact Banner release.

The smash-hit action RPG continues to add new content and characters, with this week’s big update mainly focusing on one area.

The Genshin Impact event scheduled for this week will be going live in the next 48-hours and includes the Genshin Hu Tao Banner rerun alongside a fresh four-star character.

While not quite exciting as five-star, Thoma still looks to be a recruit that everyone will be hoping to add to their roster.

The protector from afar is named so as he can smash through opponents with a series of spear thrusts, which is all part of his normal attack.

Thoma can also lunge forward as part of his charged attack and can also vault forward using a flame-filled flying kick.

A short description of the new character adds: “Thoma, who accompanied the Traveler in the Inazuma storyline, will be joining as a new four-star playable character.

“Renowned as the “fixer” in Inazuma, Thoma is also a reliable teammate in combat, providing strong defense and buffs. Thoma wields a polearm and holds a Pyro Vision.

“With his Elemental Burst “Crimson Ooyoroi”, Thoma can help his teammates deal additional Pyro Damage to enemies. He even has a special Talent which grants successful fishing attempts in Inazuma a 20% chance of scoring a double catch.”

WHEN DOES THE GENSHIN IMPACT BANNER START?

Developers Mihoyo has confirmed that the Genshin Impact Hu Tao Banner rerun date has been set for Tuesday, November 2, 2021.

PS4, PC and Mobile gamers should get access to the event at the same time, alongside the next-gen PlayStation 5 console.

Thoma, the four-star Pyro, will also be making his debut this week as part of fresh content scheduled for update 2.2.

Both characters are part of the same Banner event, meaning increased pull chances over the coming weeks.

The Genshin Impact Hu Tao Banner release time has been scheduled for 5pm BST in the UK and 3pm PDT in North America, on November 2.

A message from Mihoyo adds: “During this event wish, the event-exclusive 5-star character “Fragrance in Thaw” Hu Tao (Pyro) will receive a huge drop-rate boost!

“After this event wish ends, the 4-star character “Protector From Afar” Thoma (Pyro) will be available in the standard wish “Wanderlust Invocation” in Version 2.3.

As mentioned above, this will be a rerun for Hu Tao, who made his debut in March and proved popular with gamers.

And there is a good chance that there will be a mix of old and new players ready to snap Hu Tao and take advantage of his single-target damage.