Hoyoverse is notorious for time-gating events like the Summertime Odyssey, but the final part of the main quest has finally been released in Genshin Impact. The developers have saved the best for last, as you venture into the mirage of the Genius Astrologist Mona Megistus to deal with various unique puzzles.

The Ancient Azure Stars is the name of the fifth quest in the Summertime Odyssey quest chain. For the first time, it starts off with the main character already awake. This time, you head to Minacious Isle, the last island to get converted, and it will represent Mona. This guide will be as spoiler-free as possible.

How To Beat The First Puzzle 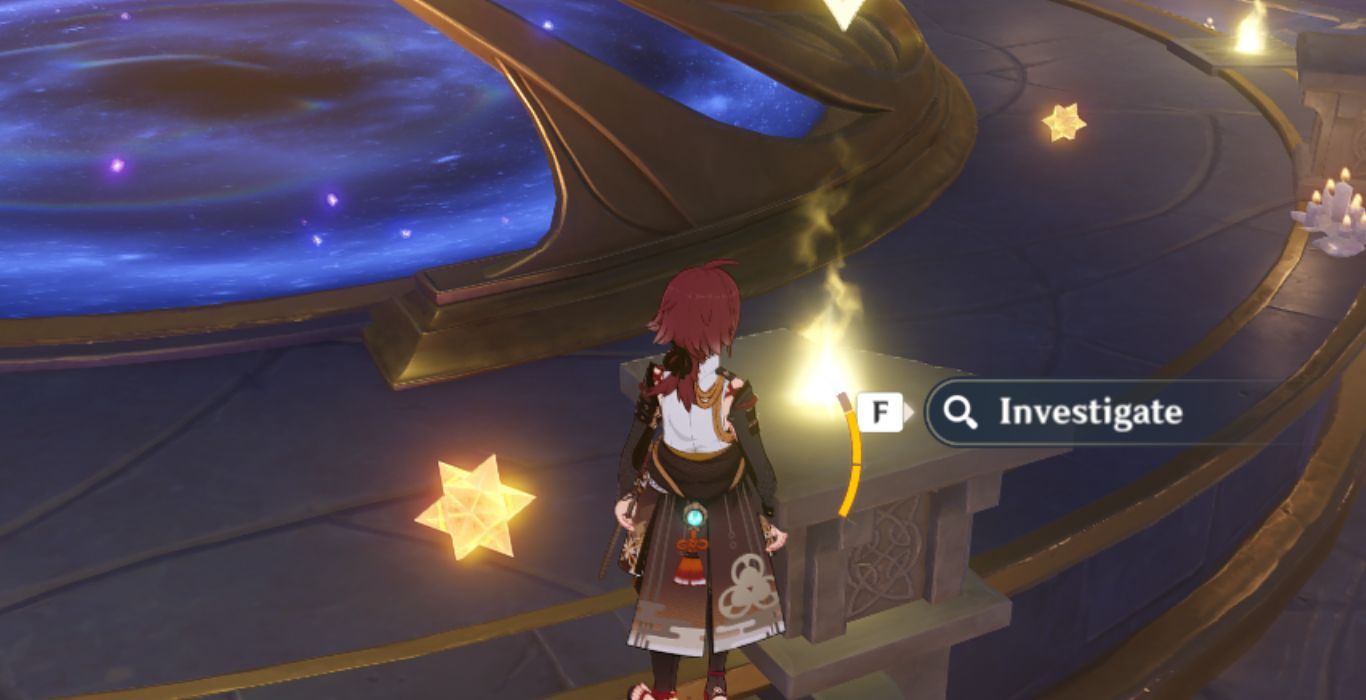 Upon entering the domain, you will already realize that it's one of the most beautiful and aesthetically pleasing ones. After the dialogue ends, simply pick up the Asterism Shards scattered around the device in the middle. There are a total of three in the area, and they have a white arrow pointing down towards them. 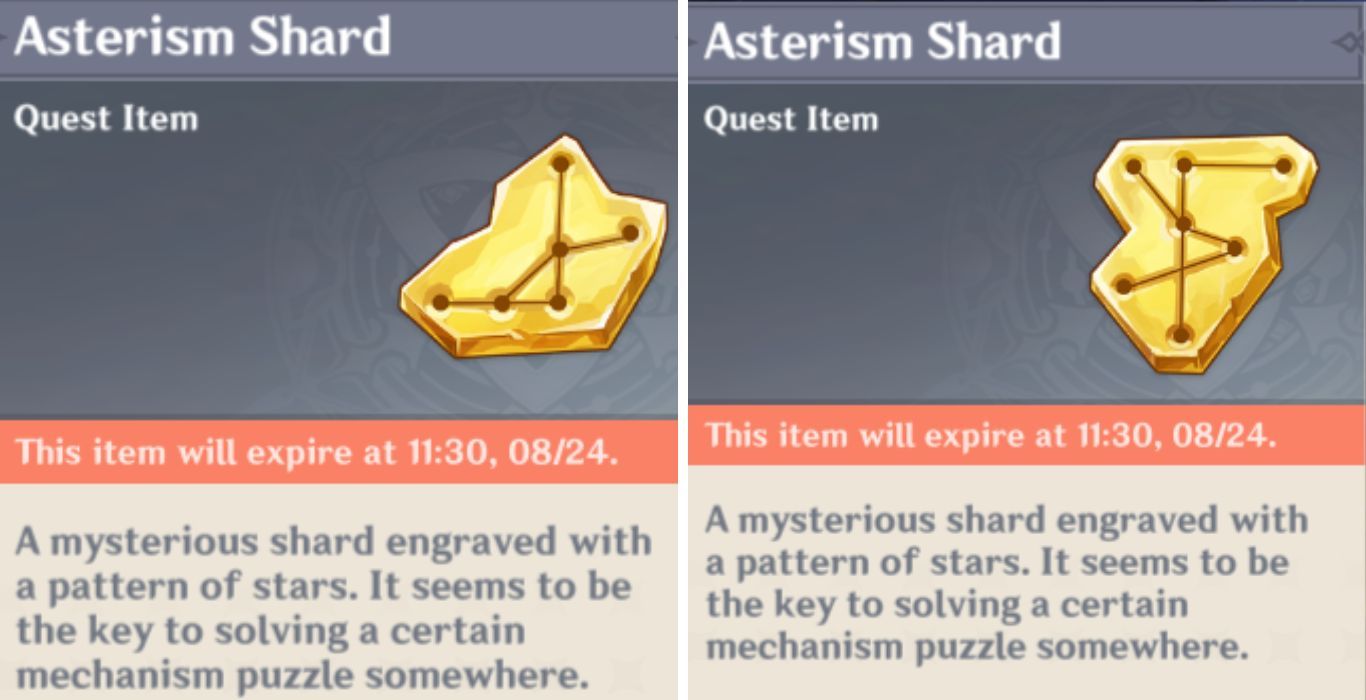 Once you've collected all three shards, head to the golden mechanism that has another white arrow on top of it. Here, you need to place two of the three shards you just acquired in the correct place.

Refer to the picture above and place the left shard on the upper slot, and the right one on the lower slot. This will unlock the doorway.

Follow the path, and you will be taken to the first Astral Puzzle. For this one, you simply need to look at the ceiling and make the same pattern shown on the ground with the lasers. Each mechanism sends a laser in one direction only. 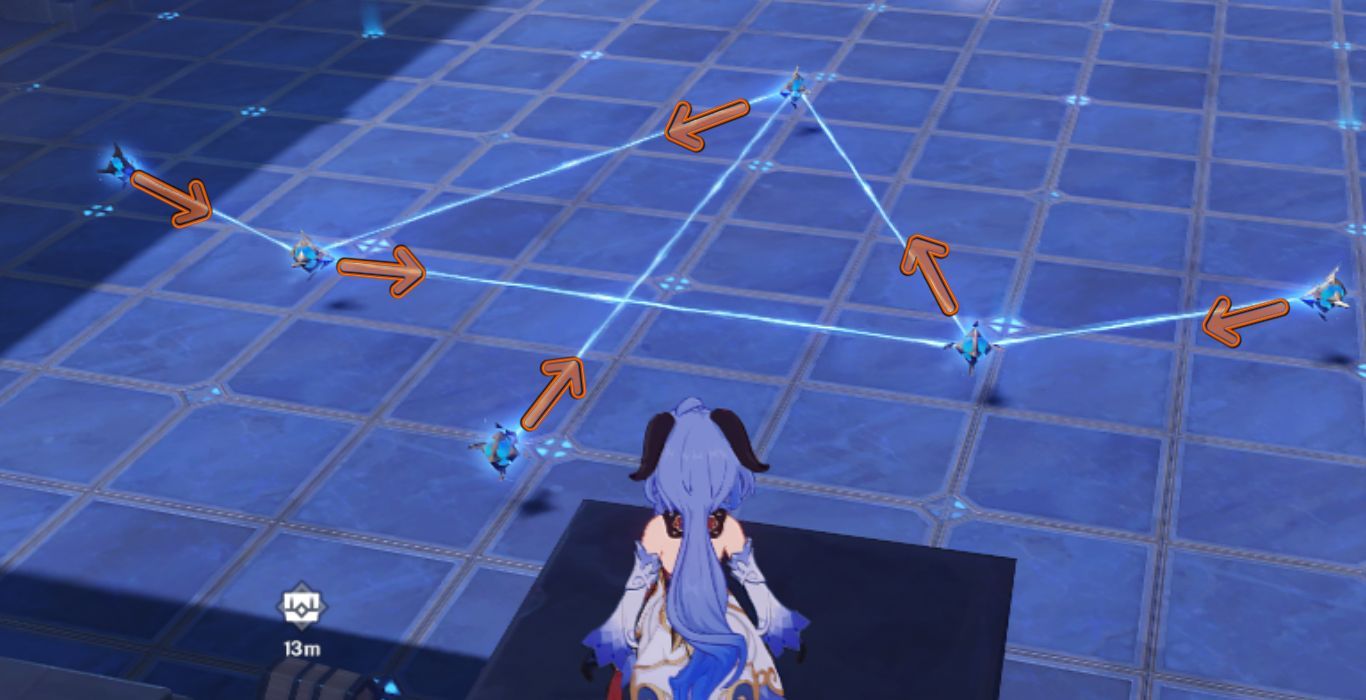 Turn the mechanisms in the direction of the arrows shown above. Once this is done, turn them all on by hitting them once.

This will solve the puzzle and unlock a chest that you can claim, and a star will spawn. 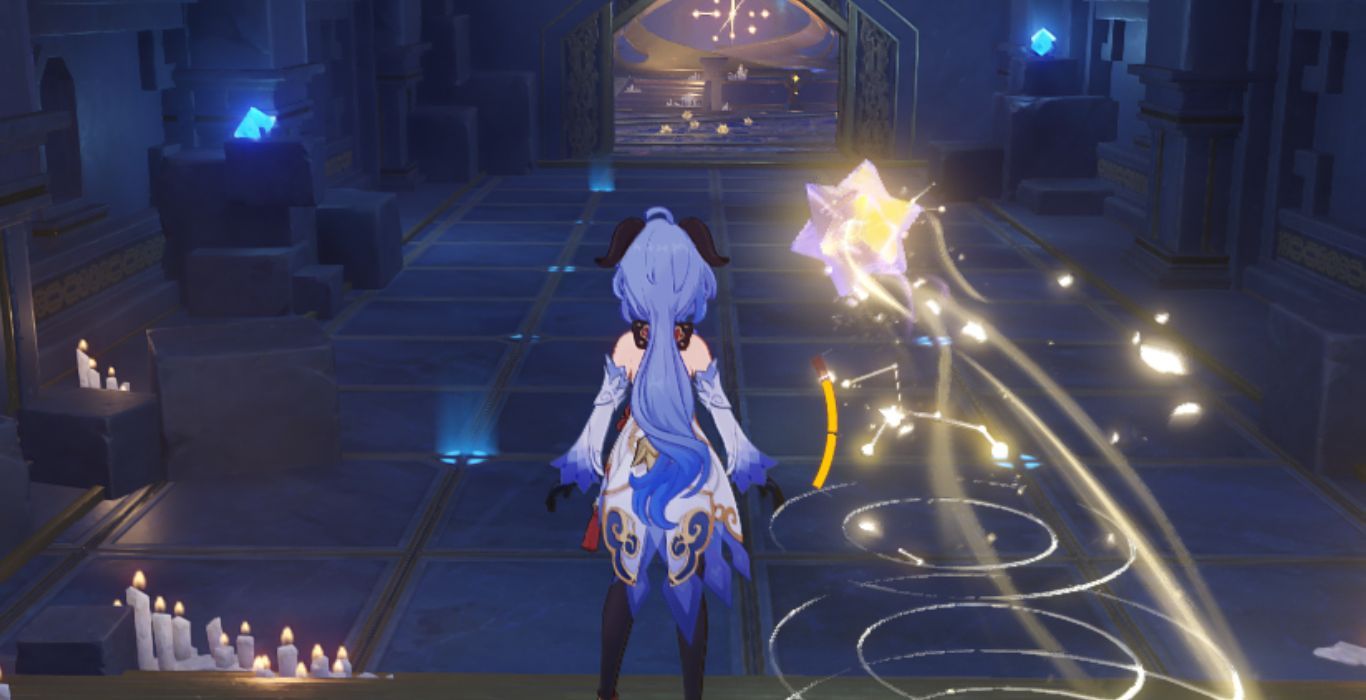 Follow this star back to the starting area, and it will go inside the pool in the middle. Follow it through, and you will be spawned in a new realm as Mona.

You simply need to follow the star and enjoy the mechanisms working around you, giving you the true feeling of a labyrinth, all while learning more and more about Lady Megistus. 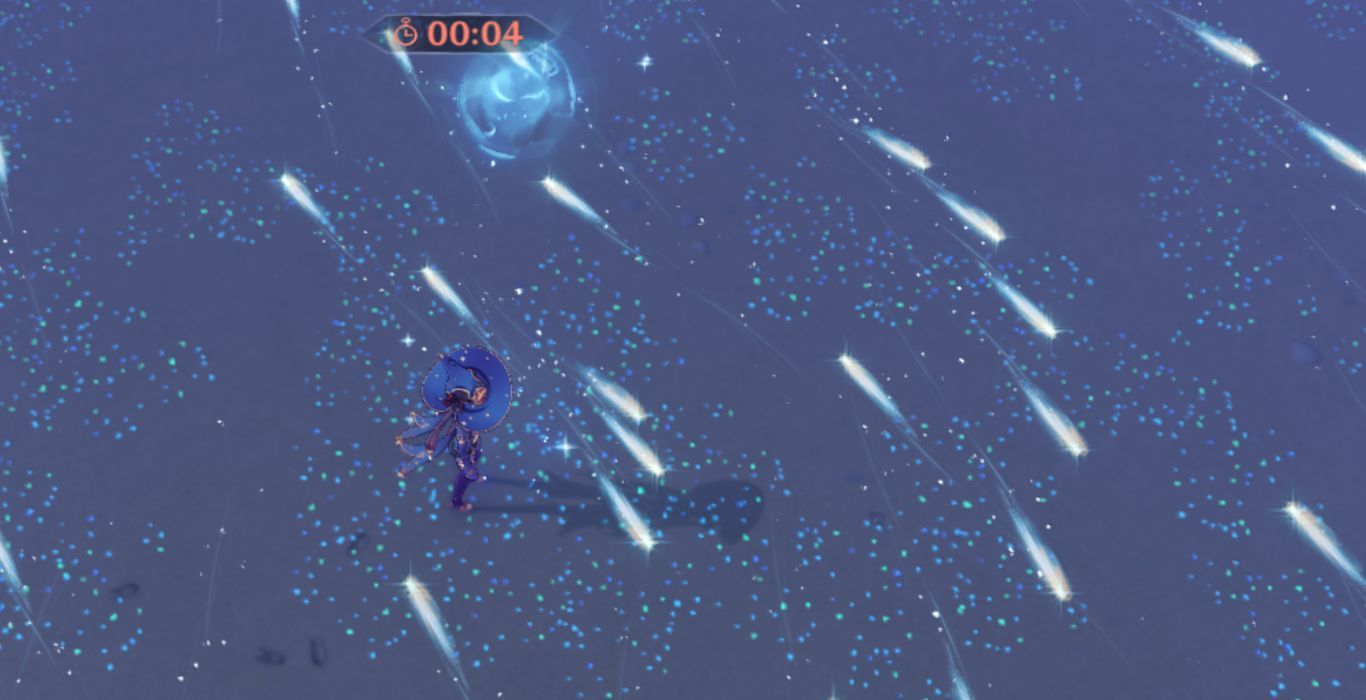 Once you're at the end, jump down the big hole and don't worry about fall damage. In this new area, you play a mini-game where you need to dodge oncoming stars and take less than 30 hits until the timer hits zero.

Once you've passed, go through the new gate to come back out to Golden Apple Archipelago. 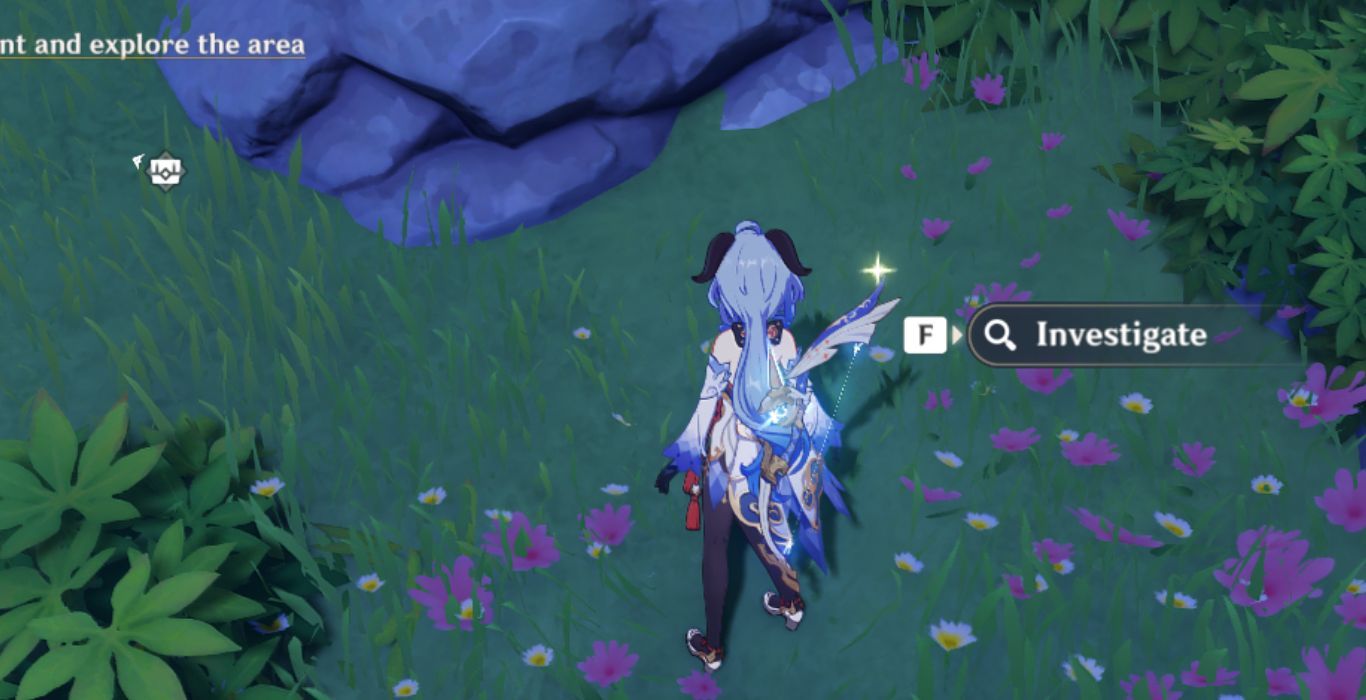 After the dialogue outside, go to the yellow marker on the same island, as shown on the map. Here, you'll see a Hilichurl digging in a shiny part on the ground. Investigate the ground to get another Asterism Shard.

How To Beat The Second Puzzle 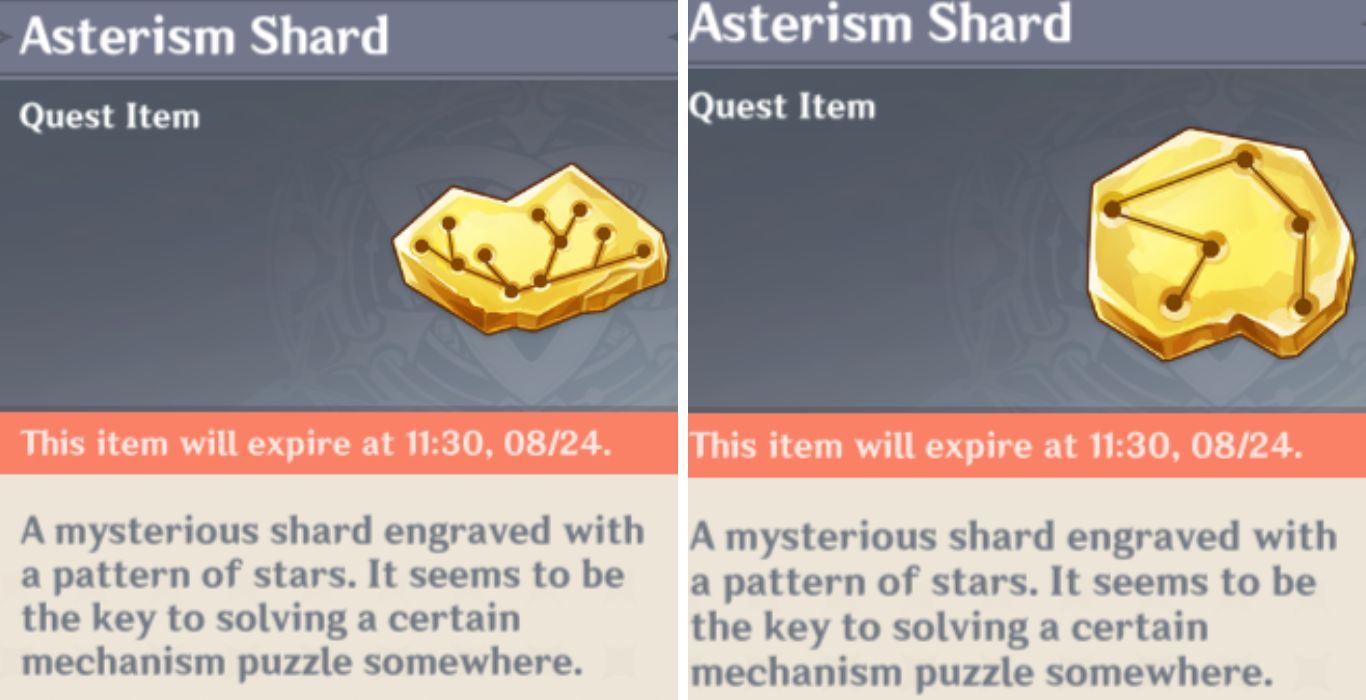 When you're back in the domain, interact with the golden mechanism on the left side of the one that you opened earlier.

The shards above will be used to open the doors through this mechanism — the left one on the upper slot, and the right one on the lower slot. 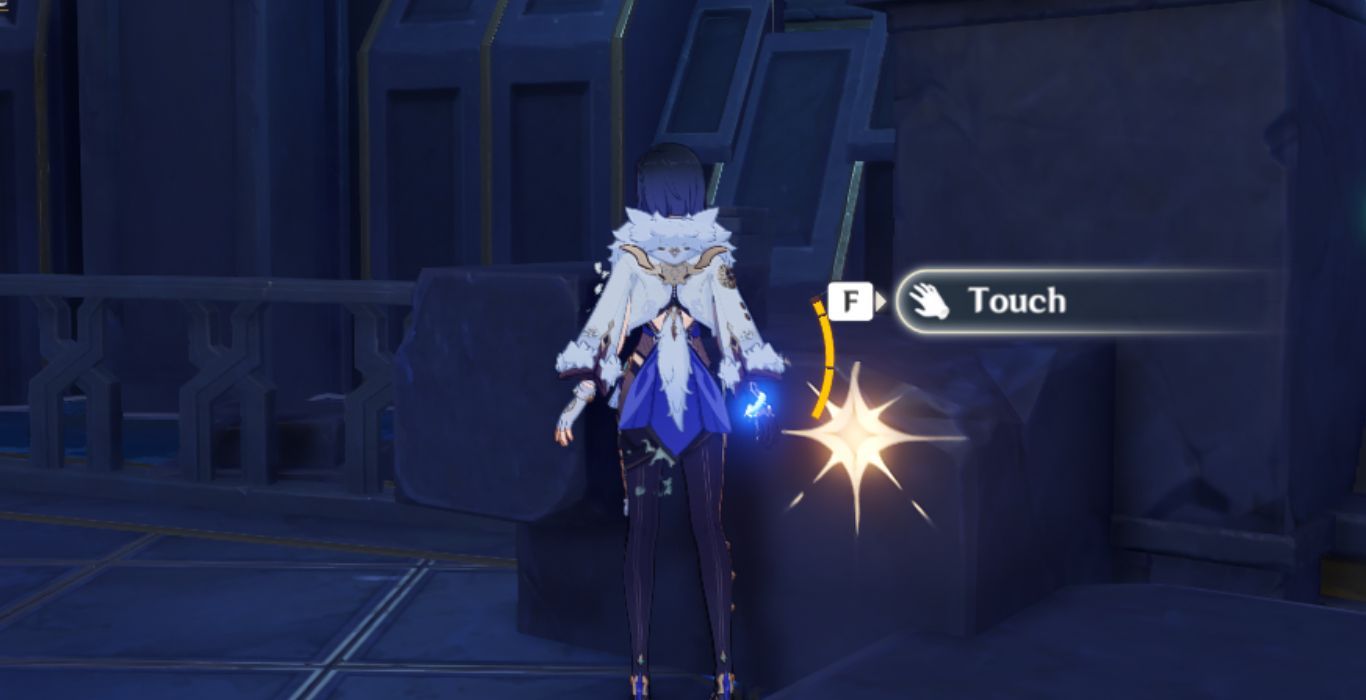 Upon opening the new door, you will find another astral puzzle, but this time there won't be a pattern to follow on the ceiling.

To find the new pattern, head over to the left side of this room, and you will see a star shining on a block. Touch it to spawn a star that you can follow. It will lead you directly to where the pattern is shown. 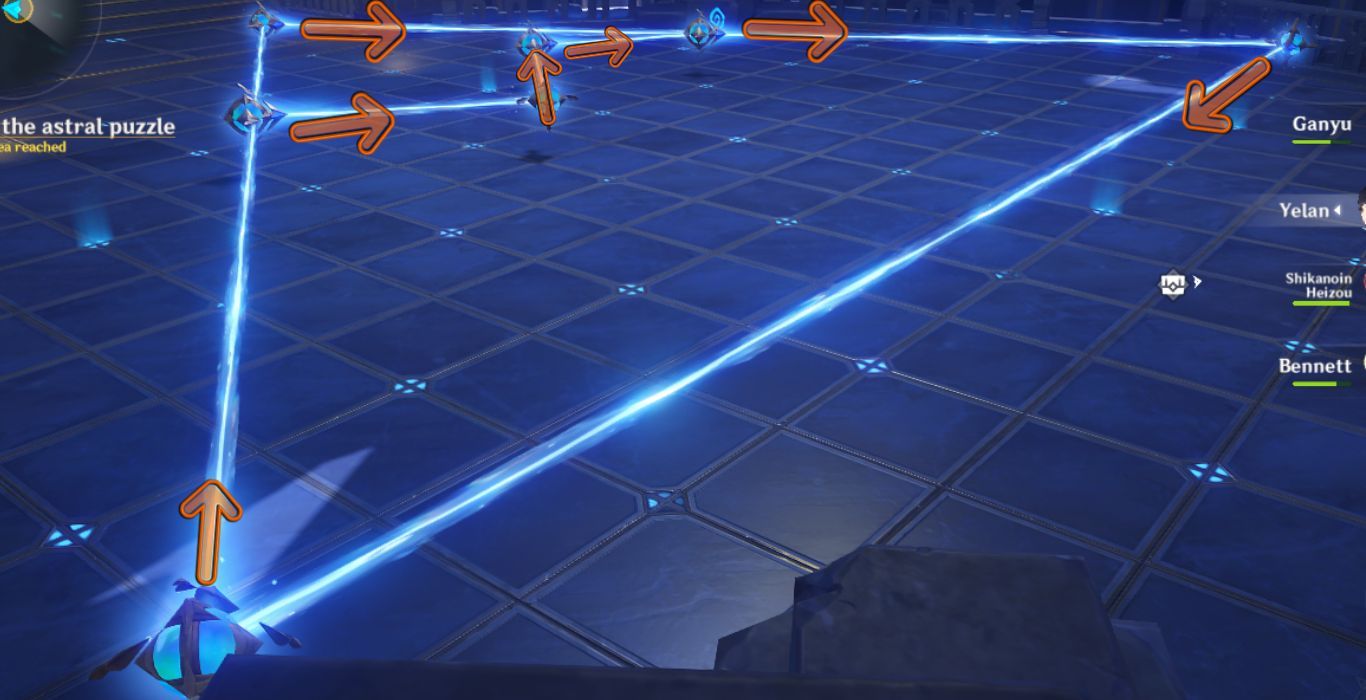 This pattern can be particularly hard to make on the mechanisms, specifically because there's a little special touch in this one.

But, simply follow the arrows as before on the mechanisms, and you'll get it in no time. The chest that spawns will once again spawn a star that you'll follow inside the pool at the start. 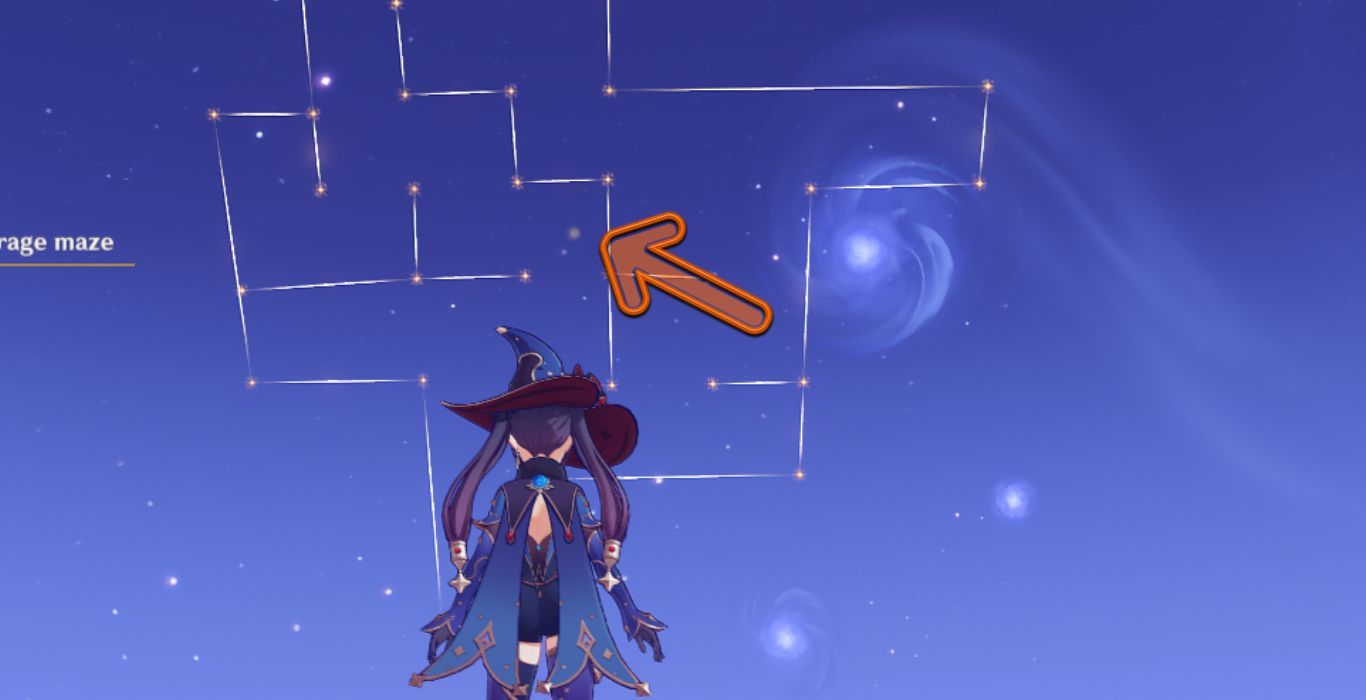 Once you've entered the new realm, keep following the star until it goes high up into a maze.

Keep your eyes right on the star, or you'll end up losing it. Once it gets to the maze, the location of the star will symbolize your location within the maze. You won't see any walls, but you will get blocked by invisible ones​​​​ if you head in the wrong direction.

Follow the openings according to the placement of your star in the maze, and you'll be able to come out on the other side. Here, another door will spawn, and you'll be back in Golden Apple Archipelago. 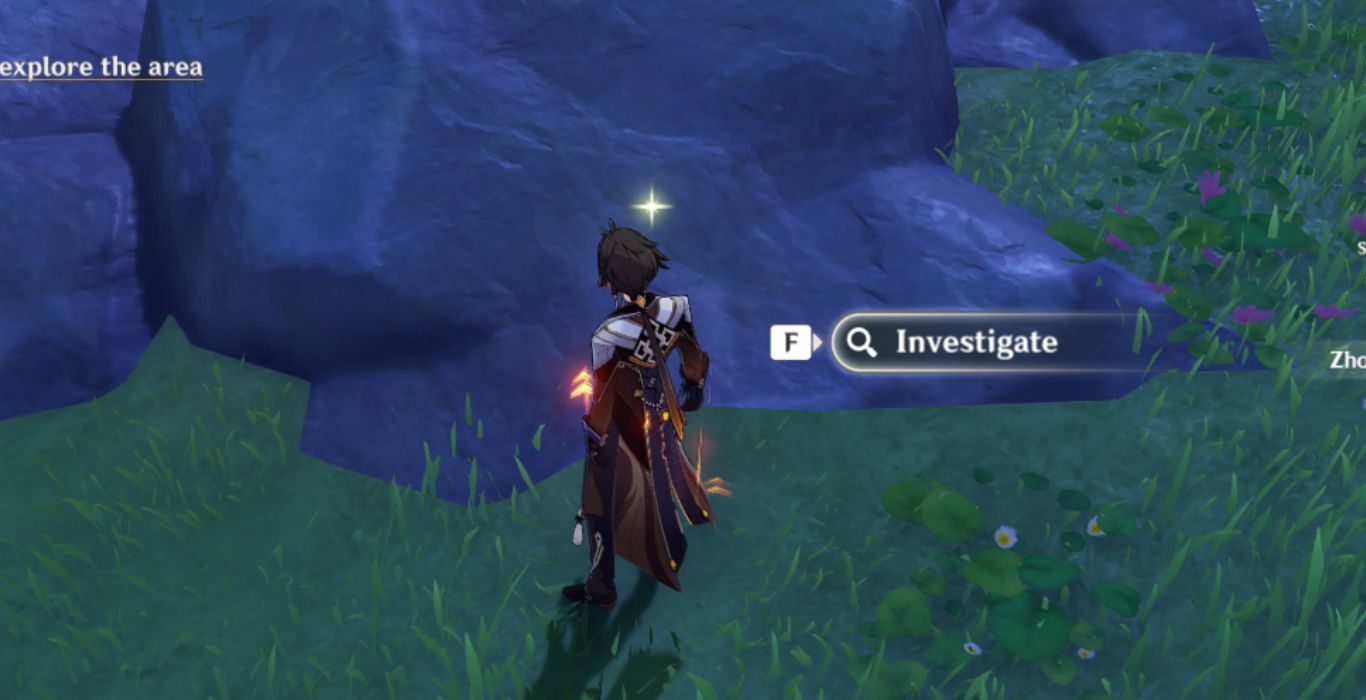 A similar process will happen again, and you'll have to find another shard within the yellow circle. There is a puzzle near the shard, but you don't actually need to solve it. Simply pick the shard up near the rocks and head back inside the mirage for the final puzzle.

How To Beat The Third Puzzle 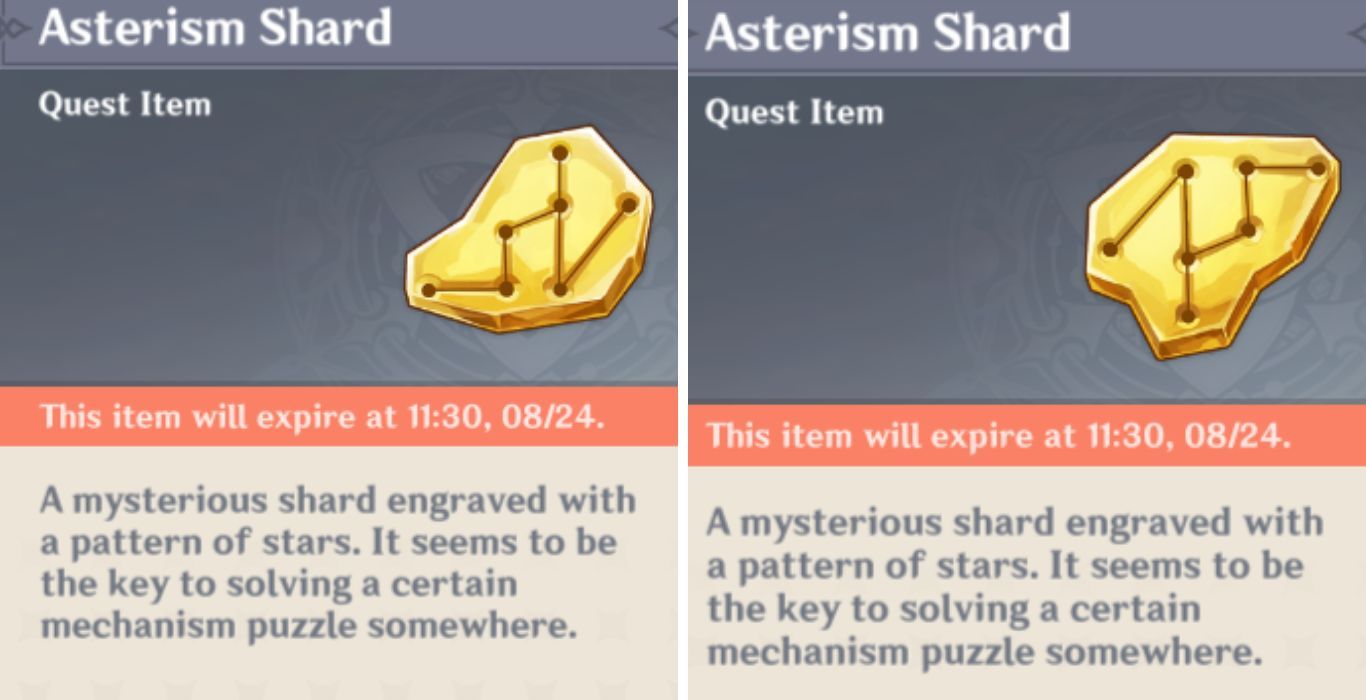 This time around, you need to unlock the second gate on the right side. This is going to be the third and the most difficult part in this domain. While there are a lot of areas you can go to, this guide will stay strictly on the path you need to beat the domain in the easiest manner.

Once you're on the correct golden mechanism, simply put in the shards shown above in the same order as before and the door will unlock where you need to make your way to the third astral puzzle.

To find the reference pattern here, you need to look through the door that is blocked by an aura. The pattern will be there on top of a pool. 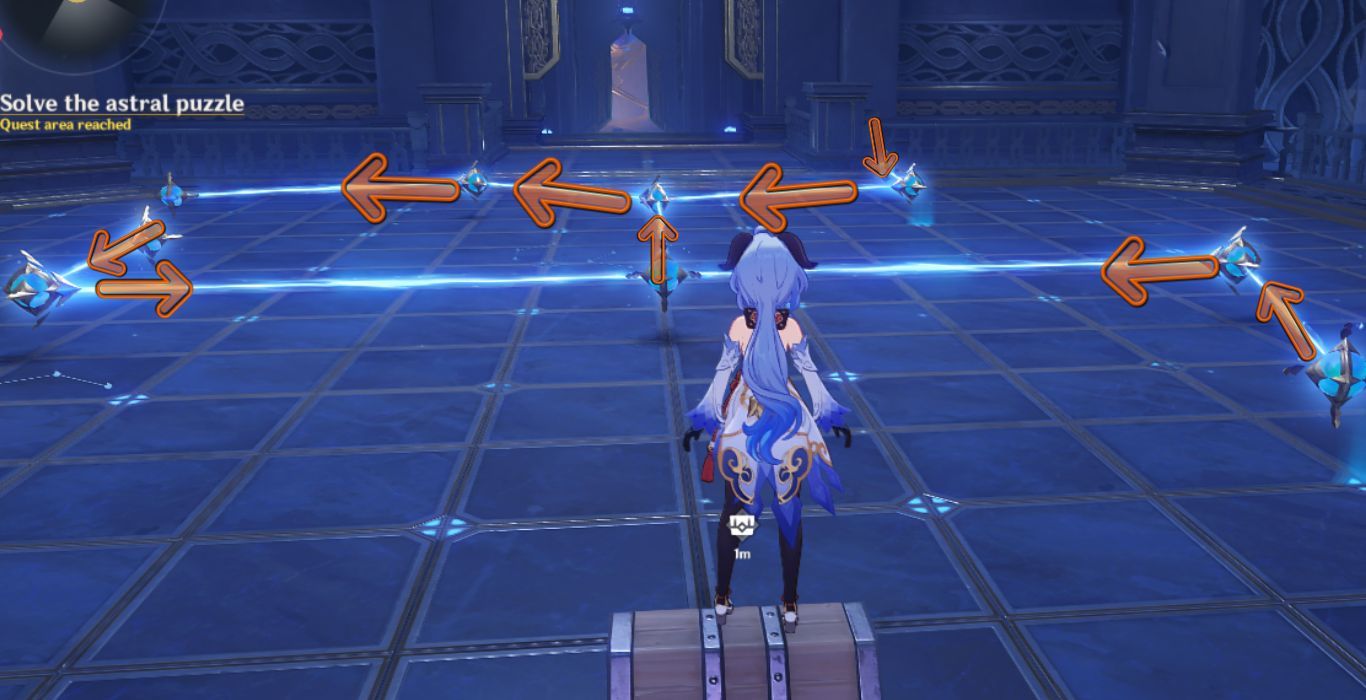 Just like before, simply turn the mechanisms towards the arrow's direction and turn them all on to solve the puzzle.

The mechanism on the top-right of this picture is going to stay vacant and doesn't need to be connected to anything. Follow the new star back to the first area.

This star won't go inside the door, instead, it will wait outside for you to open the fourth door. You already have one of the shards for this door, but it will have your head scratching while trying to find the second one. The solution is easier than you think, though. 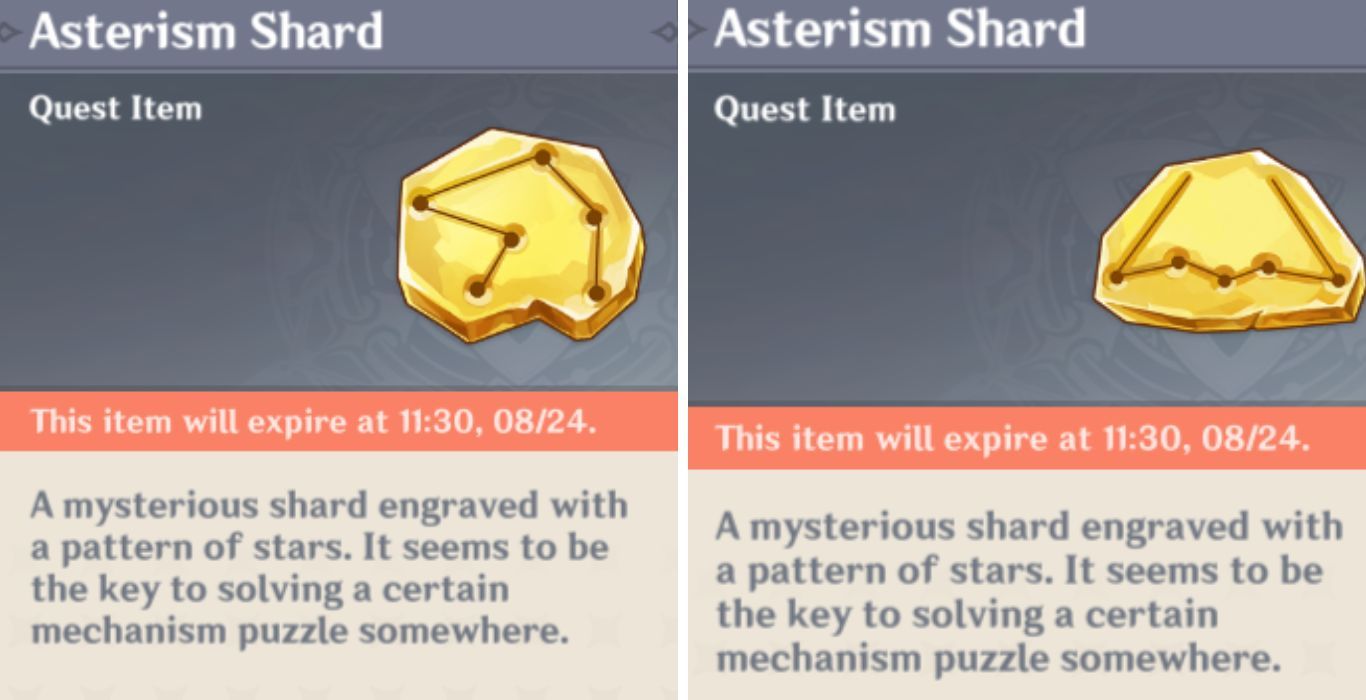 When you get to the golden mechanism for the fourth door, you will be missing the piece that needs to go on the upper slot.

All you have to do is take out the lower slot piece from the mechanism of the second door you opened, and then you can put it in here. You'll now have both the pieces and can put them in the same order as shown above. 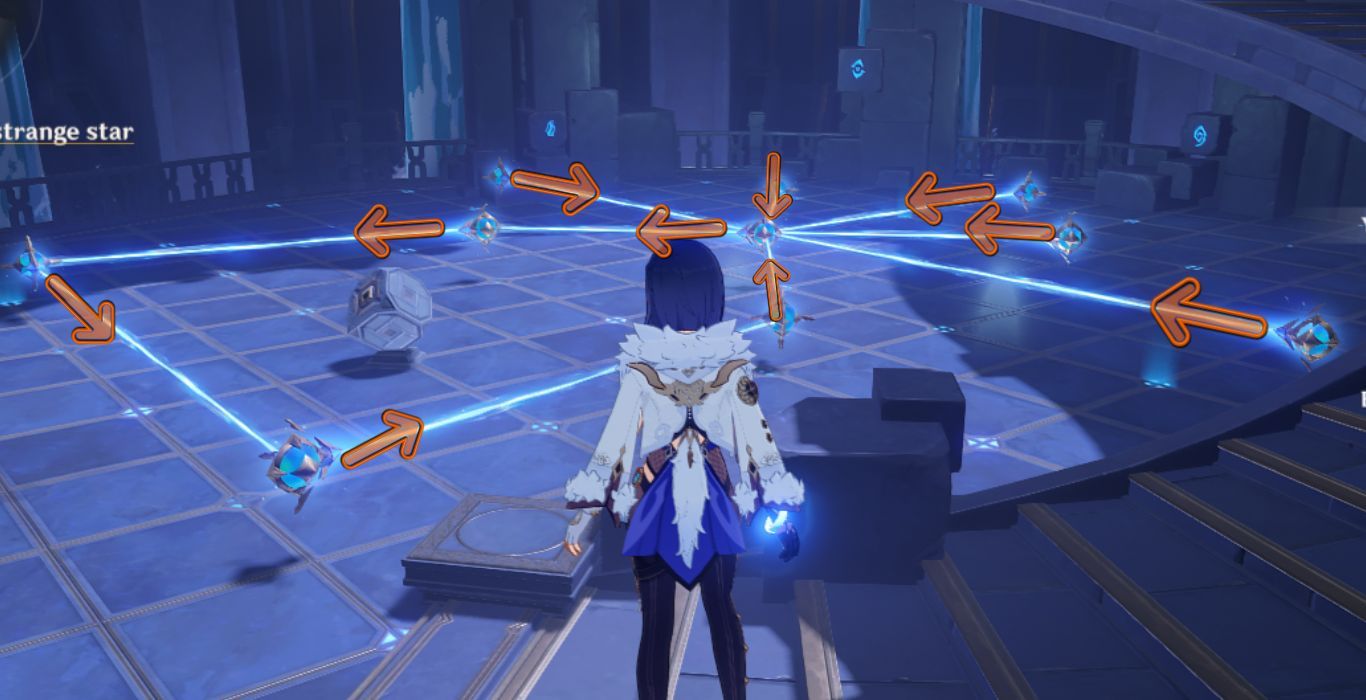 In the fourth room, you only have to solve the first puzzle downstairs to get the star that you'll be following. You can do that using the picture above and then follow the star to the pool. This time around, the star will clear out the pool and a new area will open.

Jump down the new hole and head inside the door in front. Once you're back in a domain with Mona, you won't have a star to follow initially. Head towards the right wall first, and it will move, making a new path. Keep following this path until you find the star, which you can then follow to jump down another hole and reach the familiar starry plain. 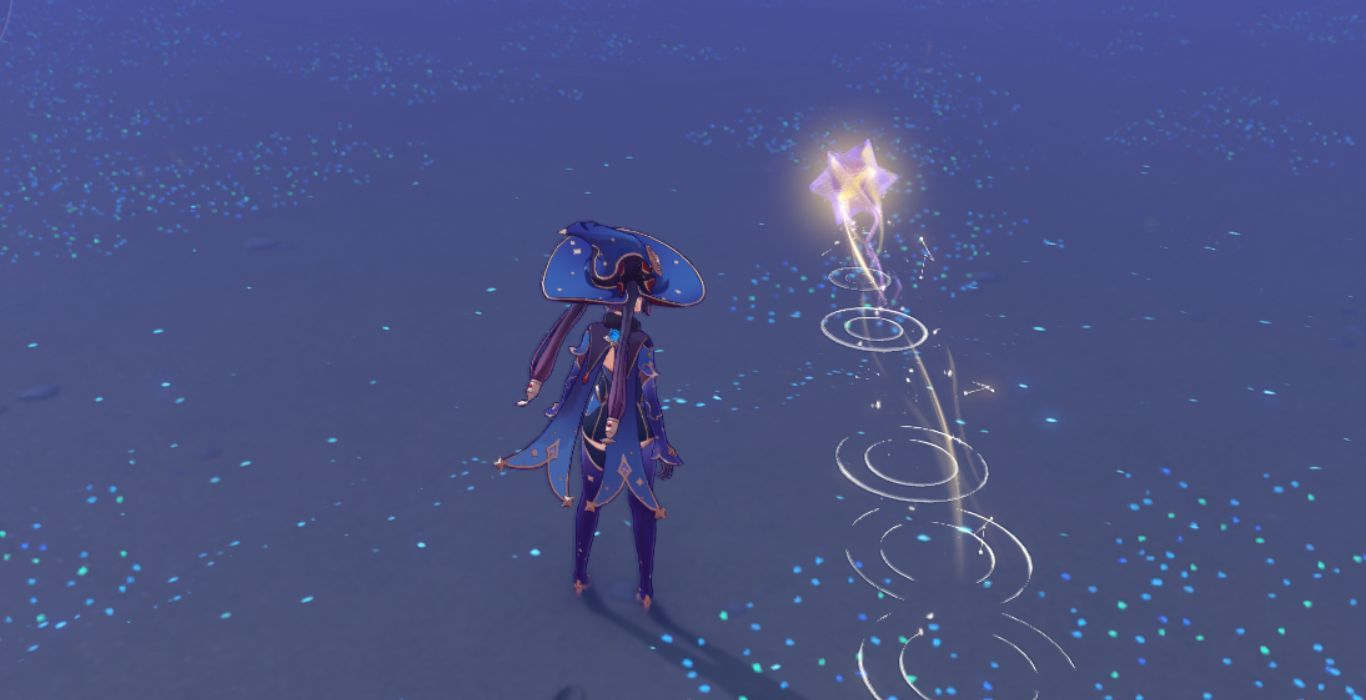 Once the dialogue ends in this plain, the stars will start disappearing as you walk toward them. You need to look for the moving star and get close to it to capture it. Once this is done, all the major puzzles in this quest will be solved and, after some more dialogue and cutscenes, the quest will be finished.