God of War Ragnarok is a combat-heavy game which features dozens of novel ways to dispatch your foes. While the Blades of Chaos are likely more iconic, the modern version of the God of War series has clearly designated the Leviathan Axe as Kratos' primary weapon.

Thankfully, Kratos' axe is a dynamic weapon that provides both deeply satisfying ranged attacks, as well as powerful melee maneuvers. But, of course, that begs the question, which of the many skills associated with the Leviathan Axe are the most potent? Well, that is exactly the question we are here to answer.

Well, true. The best of the bunch is Frost Awaken 3—which allows you to imbue your weapon quickly after throwing your axe (as opposed to Frost Awaken 4, which forces you to pause mid-melee combo in order to charge). However, while charging your Frost Awaken while running isn't quite as useful as charging it off of an axe throw, it is still a quick way to activate the buff. And here's the thing… you can unlock this skill early in the game. You are going to be mostly finished Ragnarok by the time you are able to use Frost Awaken 3 or 4. So, we think Frost Awaken 2 wins out simply because you will be using it throughout the majority the game's runtime. 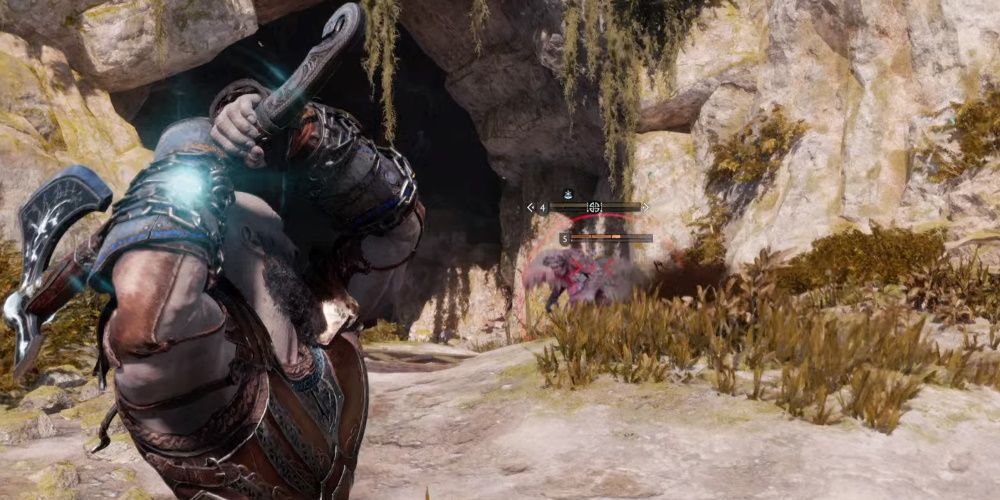 Freezing Throw 2 takes Kratos' iconic axe throw, and ratchets its power up a notch. It is undoubtedly a powerful attack, but it is also extremely slow. It certainly isn't something you are going to be able to use all the time. However, there are a few things that make it stand out. Firstly, it will apply Frost to multiple enemies if they are clustered together. Secondly, it does an excellent amount of damage.

You won't want to use it against bosses, but when you are fighting waves of enemies, it is a consistently valuable attack. And as for the speed problem, well, if the enemy starts charging you before the attack is ready, you can just release it early and get the weaker version. This means that there is little in the way of downsides for the Freezing Throw 2.

The Whirlwind Sweep is a skill that allows Kratos to enter into a secondary stance. When he does so, his light attack axe combo will cause his axe to circle him. This is, unquestionably, a fantastic crowd control attack to go to when you are surrounded by enemies. It also does a respectable amount of damage.

However, while we think the Whirlwind Sweep is most certainly fantastic, it does have a downside: you enter into the stance by pausing for a whole second after using an axe attack. So, you have to use this attack pretty thoughtfully. Additionally, the Whirlwind Sweep combo requires somewhat sharp timing. So, while this is a great move for your repertoire, it also takes a touch more technique than most of Kratos' other skills to be used effectively.

No disrespect to Whirlwind Throw, but we personally prefer the horizontal coverage that we are granted by Whirlwind Sweep. 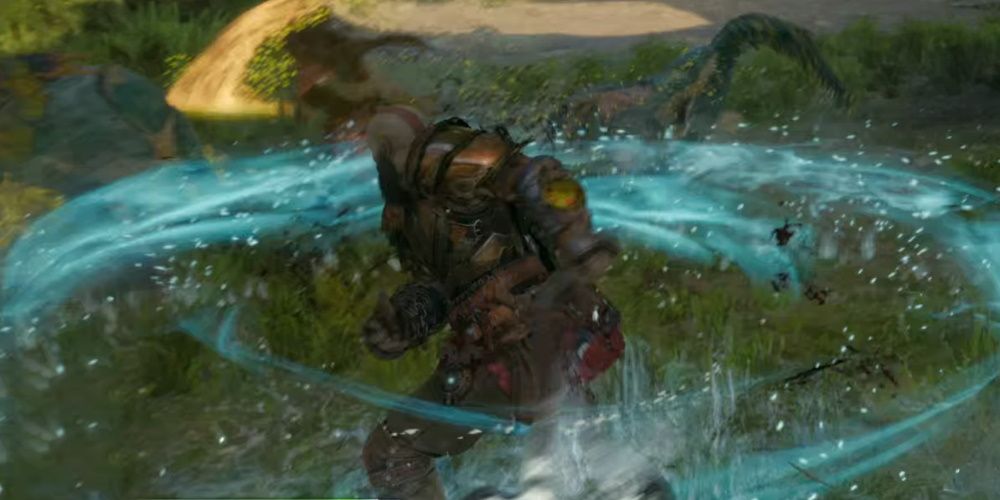 There are a lot of great attacks in Kratos' arsenal that require him to be in the Frost Awakened stance. However, while all of these are quite good, their dependence on the buffed state does drag them down a little. Moreover, they all immediately remove said buff, which is a bit of a bummer.

However, of the lot of Frost Awakened-dependent attacks, our favorite is Frozen Breach. This attack is extremely fast, making it useful for disrupting enemies. It also hits all around Kratos, making it extremely useful in a pinch. As you unlock more skills that make it easier to enter into the Frost Awakened state, you will be able to work this attack in more frequently. Around the middle of the game, it became an absolute staple for us. 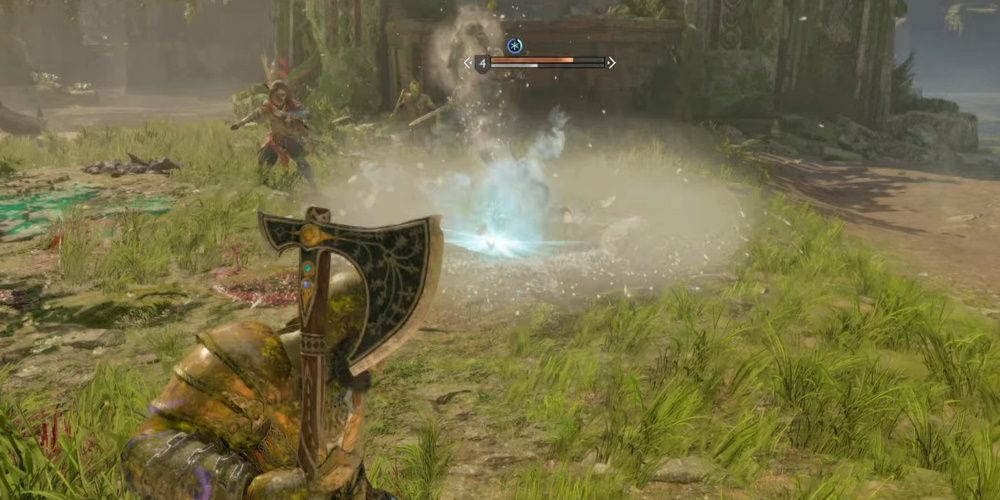 Of all the moves in the game, this is probably our favorite. Not only is this a highly damaging attack, but it also turns enemies into frost bombs. That's right, once you unlock this move, if you land a fully charged heavy attack on a light enemy, you will be able to toss them at others, and they will erupt into an icy explosion when they make contact with the ground.

This is an incredible attack for crowd control. If there are light enemies around, you can use this to fling them at other baddies, dealing damage and inflicting the Frost effect. The only issue is that it isn't quite as effective when used against heavier enemies. Instead of grabbing them and throwing them, it just delivers two powerful strikes. Still good, but not nearly as good when some of those heavier enemies will resist being staggered by this heavy attack. 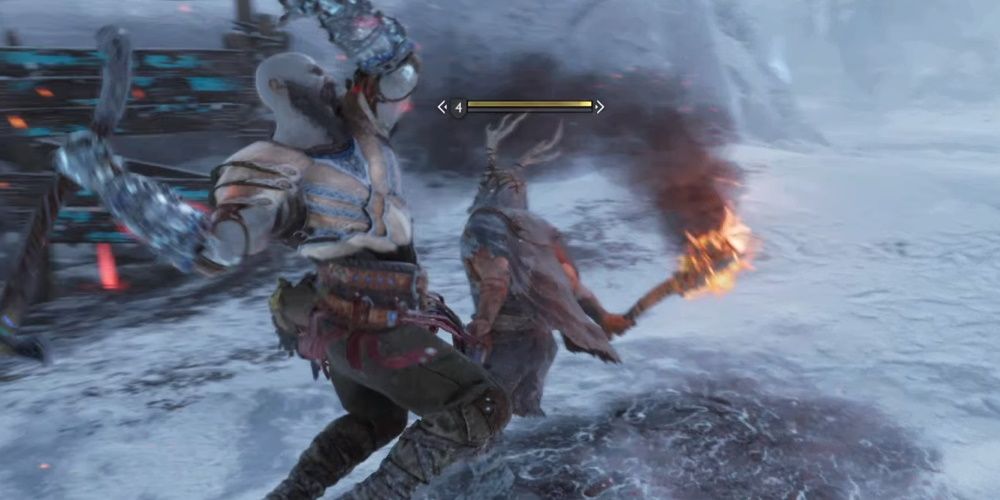 Once you unlock this attack, it will almost certainly become of your most used rushdown moves instantly. Frost Rush is perfectly fine, but in exchange for being a touch slower, Leviathan's Fury is simply worlds better. Not only does it deal more damage, but it also pops lighter enemies up into the air. On top of all that, it applies Frost.

Leviathan's Fury shouldn't be used thoughtlessly. You will be locked into this attack, which means no take backsies. Once you are committed, the attack is coming out. However, don't take that as a condemnation of the attack. Leviathan's Fury is a staple move in Kratos' kit and will typically be the attack you go to when you are charging at your opponents. 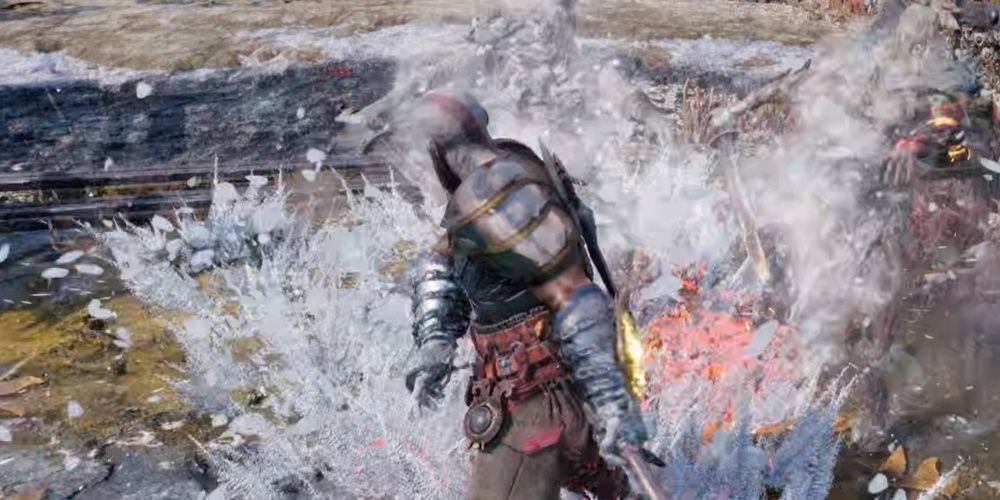 The Glacial Rake is performed by holding R1. It sends a wave of ice shards directly at your opponents. This is great for a number of purposes. Not only does it hold them in place for a prolonged period of time, but it also applies a large amount of the Frost to your opponents.

When the Glacial Rake is great for one on one encounters, it does have a decent-ish spread, and can hit multiple enemies at once. Though they will need to be pretty clustered together. Better yet, this skill is available early, and it never truly loses its potency. Especially when you are looking to apply that Frost effect in a pinch. 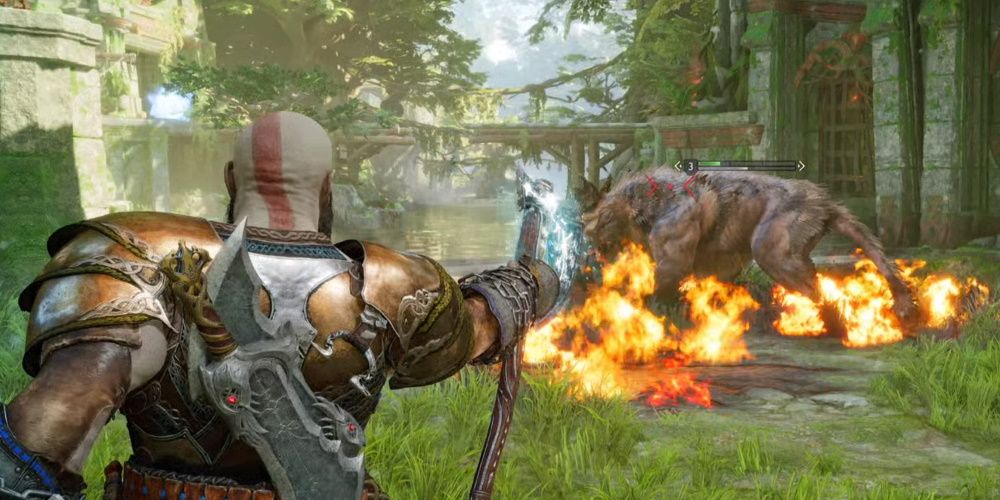 It is hard to emphasize just how potent this skill is for people who want to chain attacks together across the Leviathan Axe and Blades of Chaos. Once you have purchased this incredibly cheap skill, you will do extra damage when you attack an enemy who has been set ablaze.

Naturally, setting your enemies on fire is something that a ton of your Blades of Chaos attacks do. So, your enemies will often have the Burn effect on them. The Extinguish Flames skill is here to encourage you to switch frequently. Once you get the rhythm for that style of combat down, you will find that this is a cornerstone of combat in God of War Ragnarok. 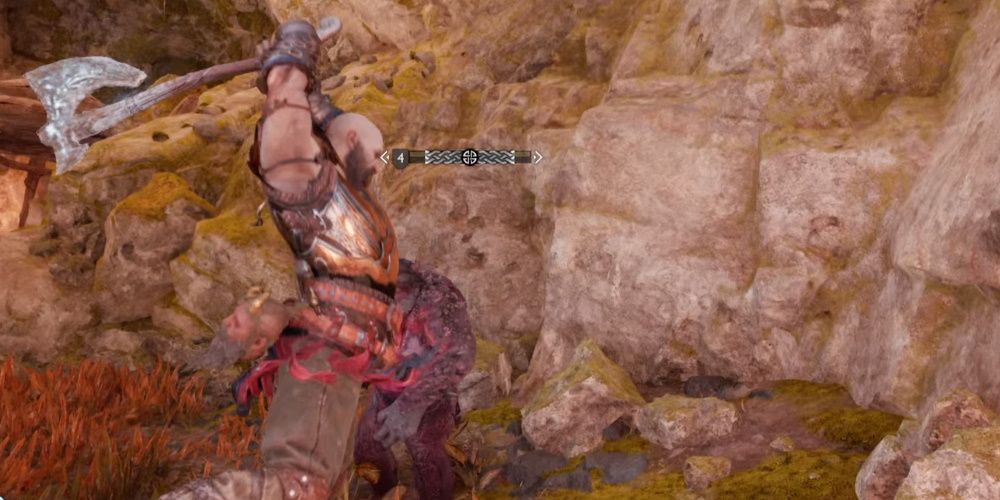 Returning Storm is an absolute godsend when it unlocks. Unarmed combat is a fantastic way to rack up stun, but it isn't much for damage. So it can be a bit of a pain in the butt to incorporate your unarmed attacks into combat.

The Returning Storm, however, allows you to perform your combo and then end it with a huge axe attack that does excellent damage, applies Frost, and returns your axe to you. It just makes it so those melee combos can be implemented seamlessly. Once you unlock the Returning Storm, you can toss your axe at a foe, run up, pound them with your fists, and then end your melee combo with a powerful axe attack. It is absolutely a fantastic skill that helps you synergize between the different types of attacks.

Finally, we get to the big boy. The Vengeful Sickle is actually an attack you can unlock right from the beginning. You will then be able to unlock Vengeful Sickle 2 at level 2 and make it even more powerful (that really isn't a distinct move, it just improves the original). And, more than anything, you desperately want to make sure you have this one unlocked right away.

What it does is turn your charged light axe throw into a multi-hitting combo attack. Not only does this deal very respectable damage, but it will lock them down, and it naturally gives you an opportunity to transition into your Blades of Chaos attacks. If you time it right, you will be whipping them with your blades as they are still getting hacked by your axe. This attack is the best way to transition into another weapon. It is incredibly powerful, and you should be using it from the beginning of the game all the way to the end. It is that good.