It is time for Atreus to venture out on his own again. However, this time Sindri won’t be accompanying him. But worry not, that doesn’t mean you will be going it alone. You will be joined by Angrboda, a fellow giant. If you thought that Atreus' previous headlining missions was a one-off, then you were sorely mistaken. That was just a whiff of what was to come.

God of War Ragnarok is clearly giving everyone's favorite archer some room to grow. Unlike his previous foray, this is a lengthy mission that has multiple parts. Get comfortable, because you aren't leaving the Ironwood anytime soon. 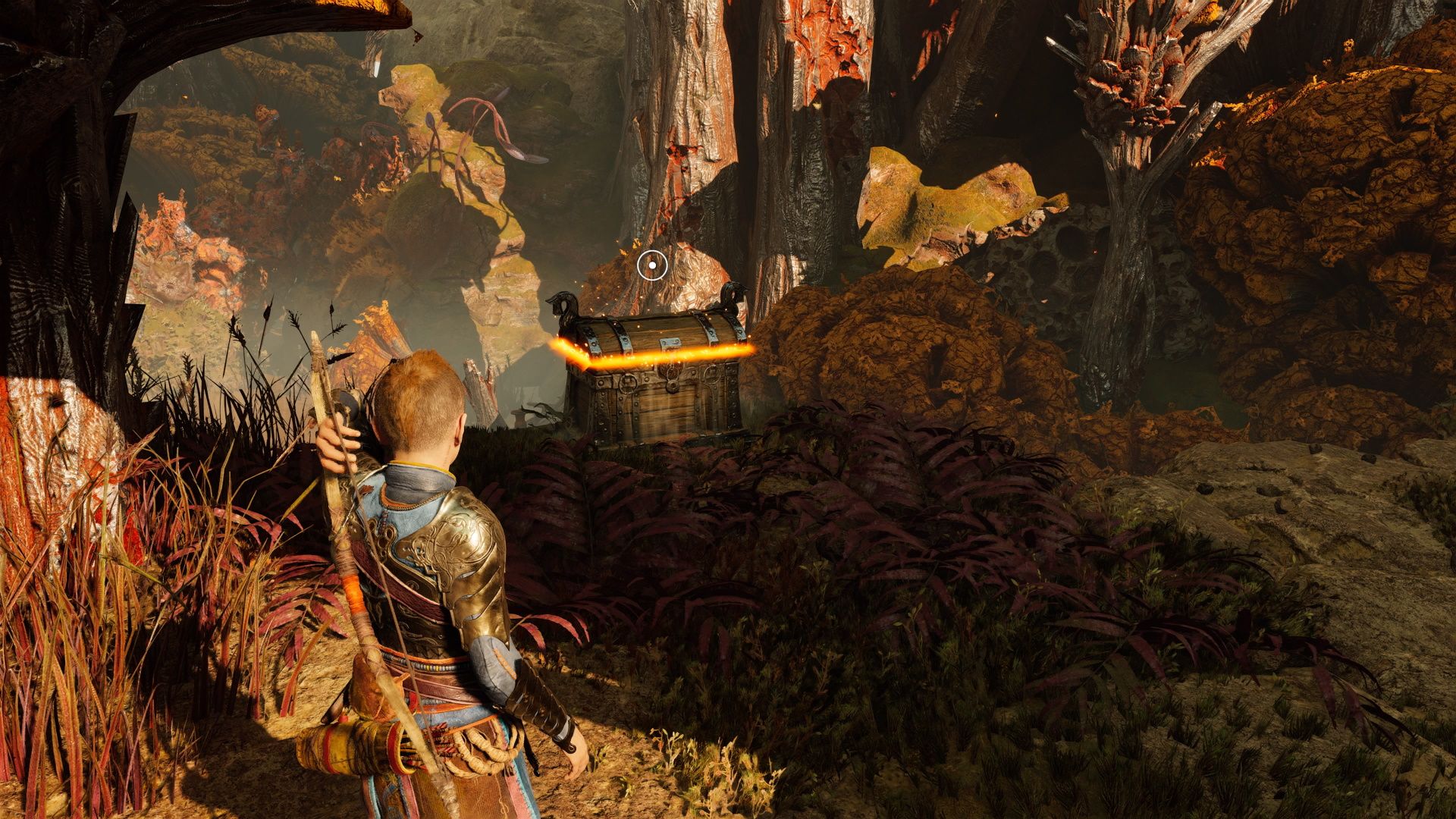 Atreus will wake up surrounded by wolves. Follow them into a clearing. Once you do, you will be introduced to your new partner in crime: Angrboda. After you exchange pleasentries, you will venture off into the forest. Atreus isn’t quite as mobile as Angrboda, so you will be shooting your way past rubble as she hops around. After you travel through your second hollow log, there will be a chest on your left.

If you glance at your environment, you will see a number of vases placed all around you. These vases will be a pretty common sight during your time in the Ironwood. You can shoot them for a little extra Hacksilver. 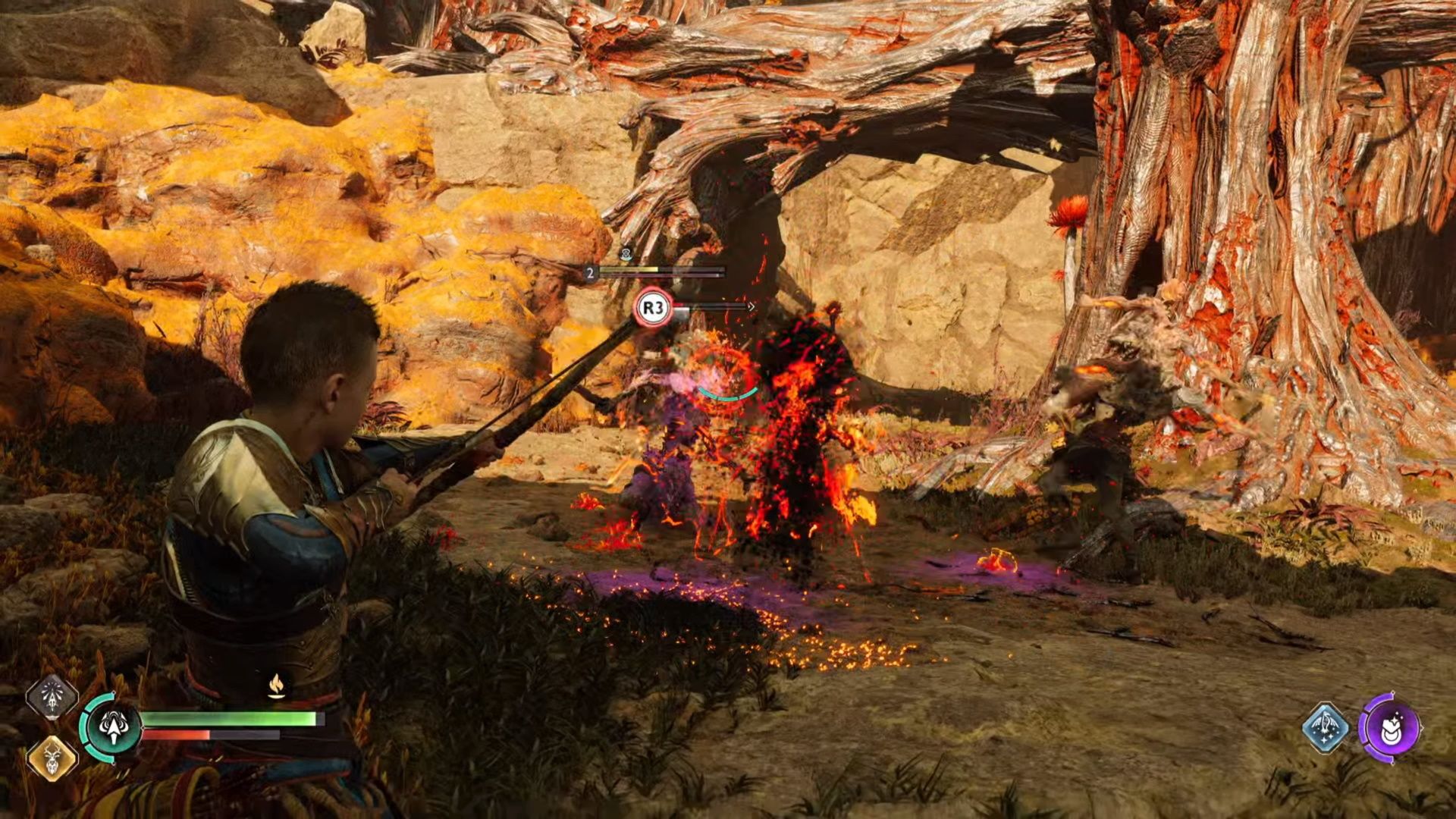 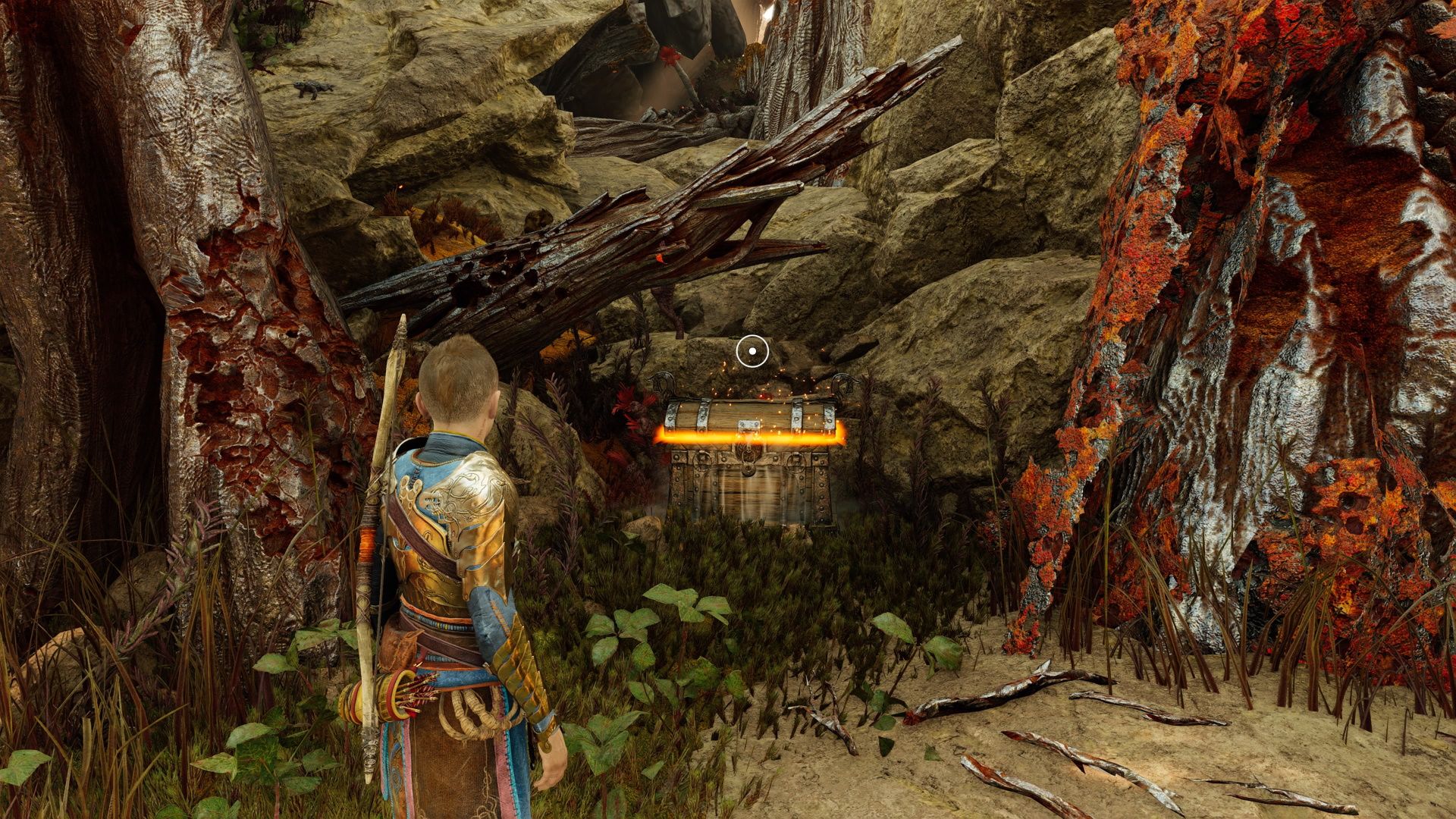 Continue forward down the path, following Angrboda's lead. Once you pass through your third log, you will fight a group of Draugr. Polish them off, and you will find a chest to your left. At this point in the mission, Angrboda acts independently of you. You can’t give her any commands. However, that doesn’t stop her from absolutely shredding enemies. 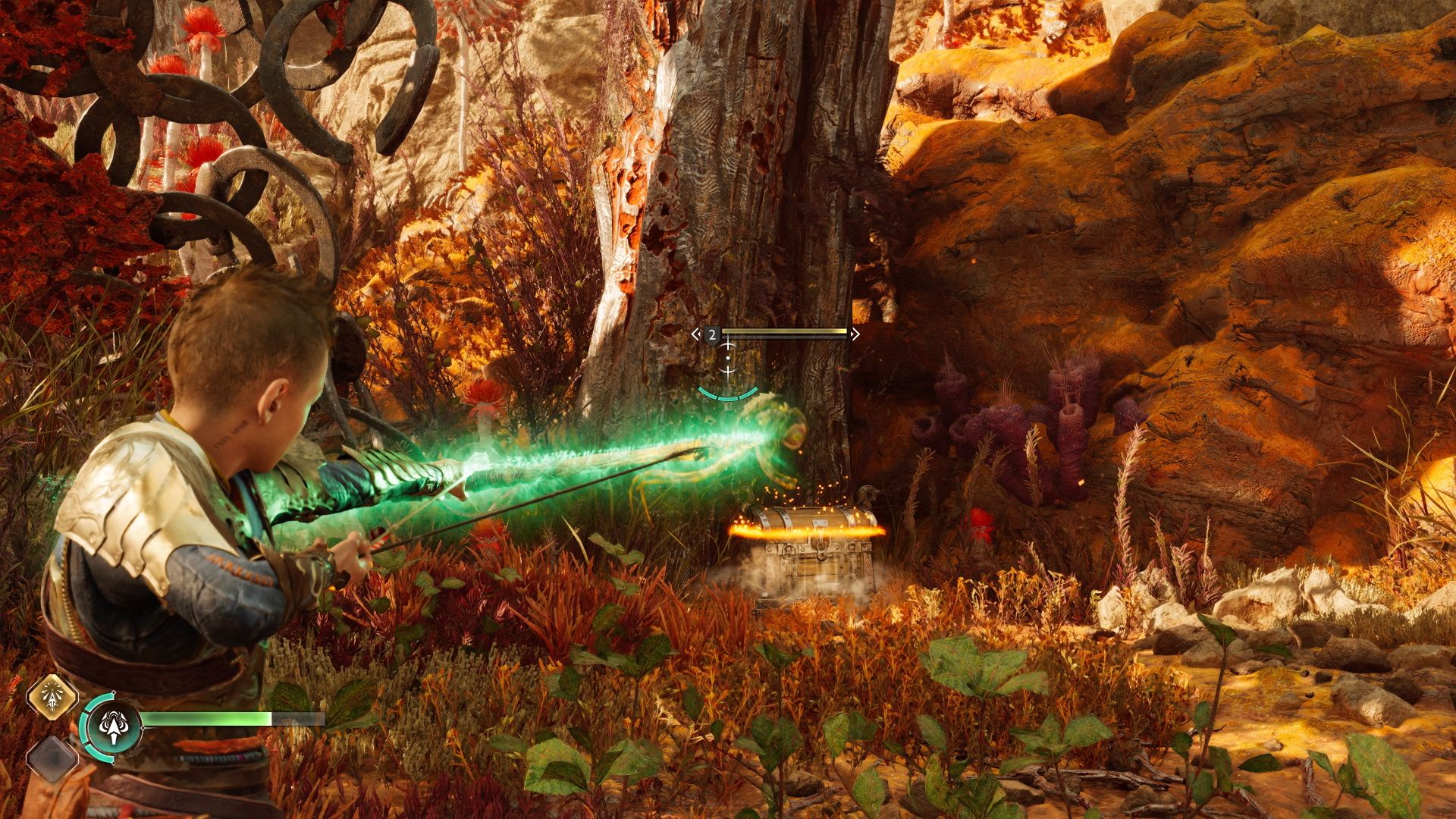 After the fourth log, there will be a chest sitting smack dab in the middle of the path. You can’t miss it, and it gives you some Forged Iron and the Y’dalir Timber. Soon after, you will shoot a green glowing object to reveal a grappling point. After you grapple across the gap, you will be ambushed by a couple of Nightmares. Atreus being able to fire arrows so quickly (especially in comparison to Kratos' axe throw) makes the Nightmares very manageable.

While charging your bow up is recommended when you have the time, letting loose a number of quick arrows is also extremely effective. Especially if you want to disrupt an enemy's attack. 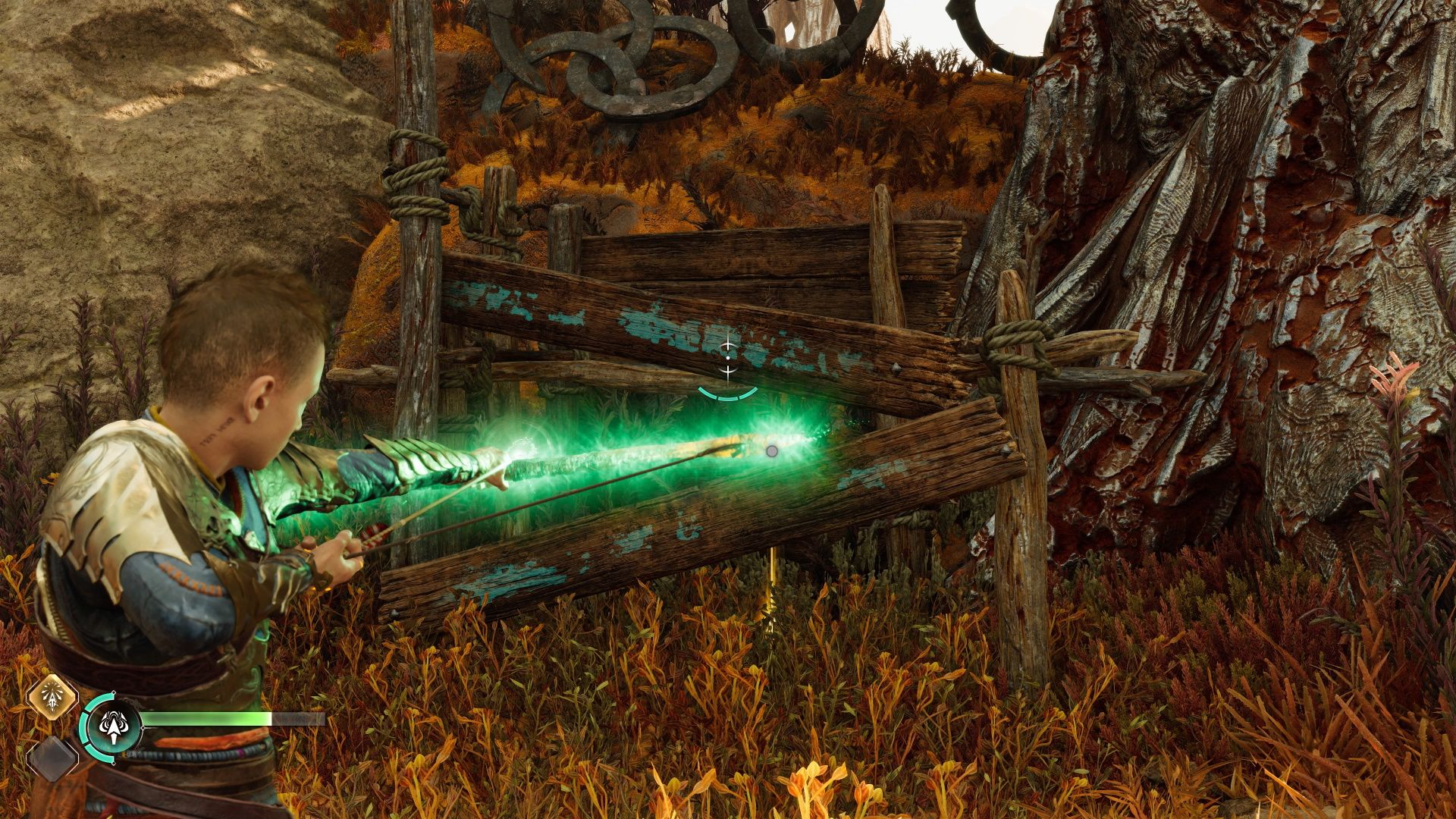 After killing the Nightmares, head to the left. Then, take another left and climb up to the area above. Shoot the barrel down, and grab a Shattered Rune. Now, destroy the structure made with planks to get a Lore Scroll, and then head to your left. 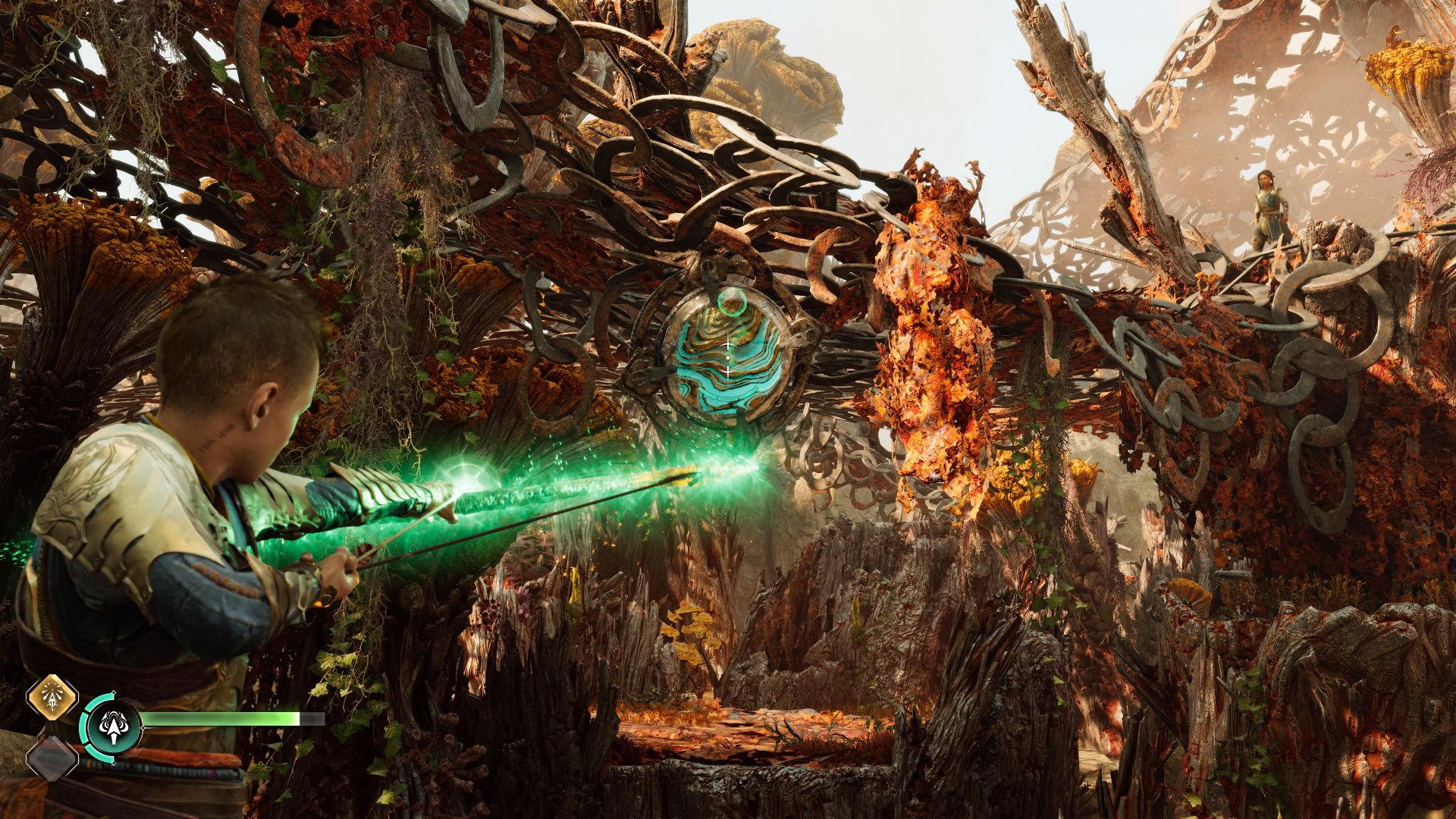 Blow down the gate; then, you should see a pulsating orb across the way. Hit it with an arrow, and it will drop a grappling point down, allowing you to progress. Once you grapple across, you will be ambushed by two more Nightmares. After you kill them, make sure to loot the nearby chest. You will swing across another gap and enter a giant arena that has four Nightmares.

They will hang back and charge their projectiles. As long as you split your attention, and shoot the one currently charging their attack, they won’t have much of an opportunity to fire anything off at you. Once you have killed all four, open the chest and get the Rampaging Ibex runic attack. 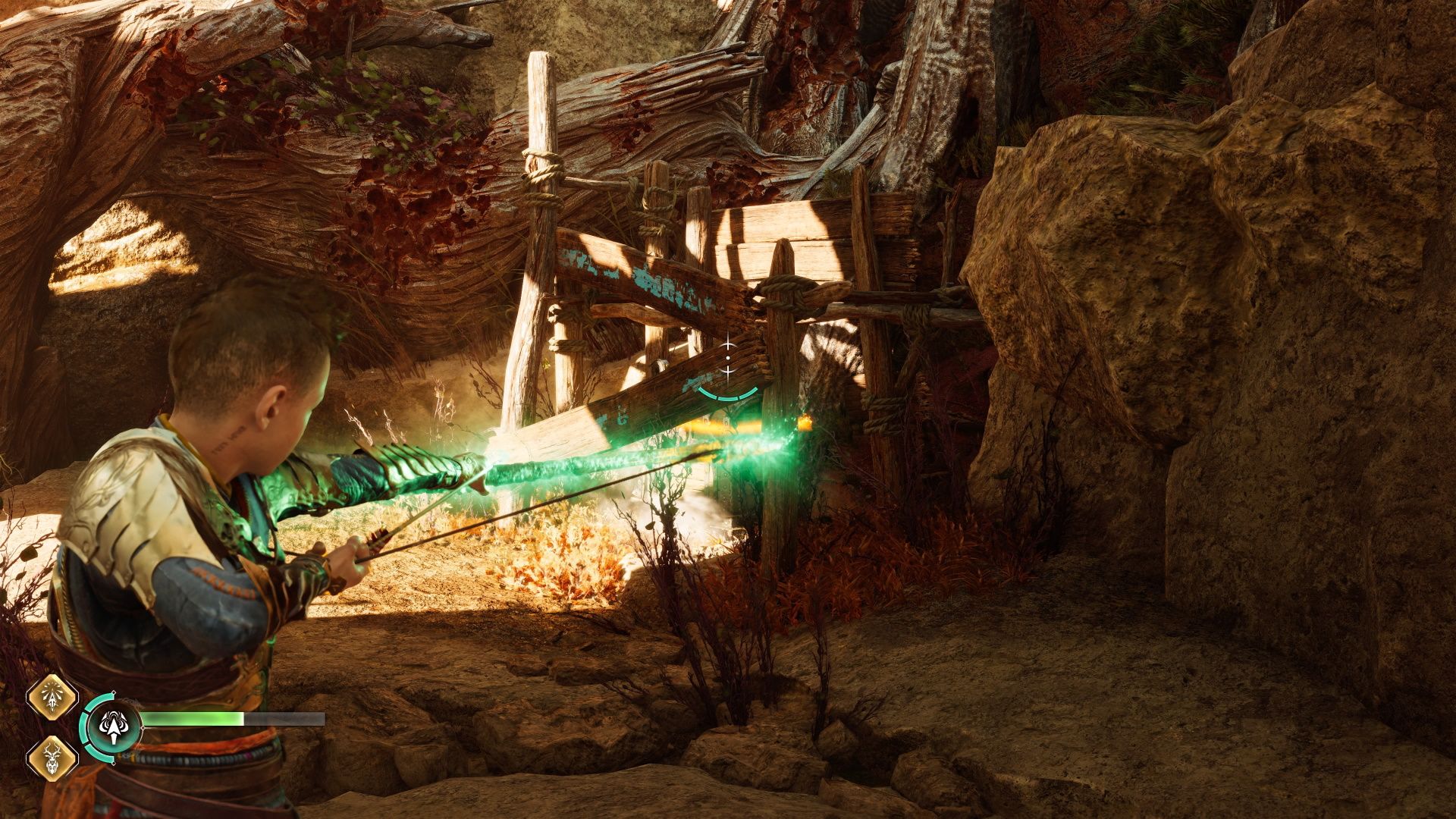 Climb up the nearby stone slab, and hop onto the giant tree across from you. You will do a little more grappling before you meet back up with Angrboda. Follow her down the path, but take the first right you see, and grab the treasure chest hidden under the wooden structure.

Keep an eye out for barrels hanging from trees. A lot of them hold pretty nice crafting supplies in this area. 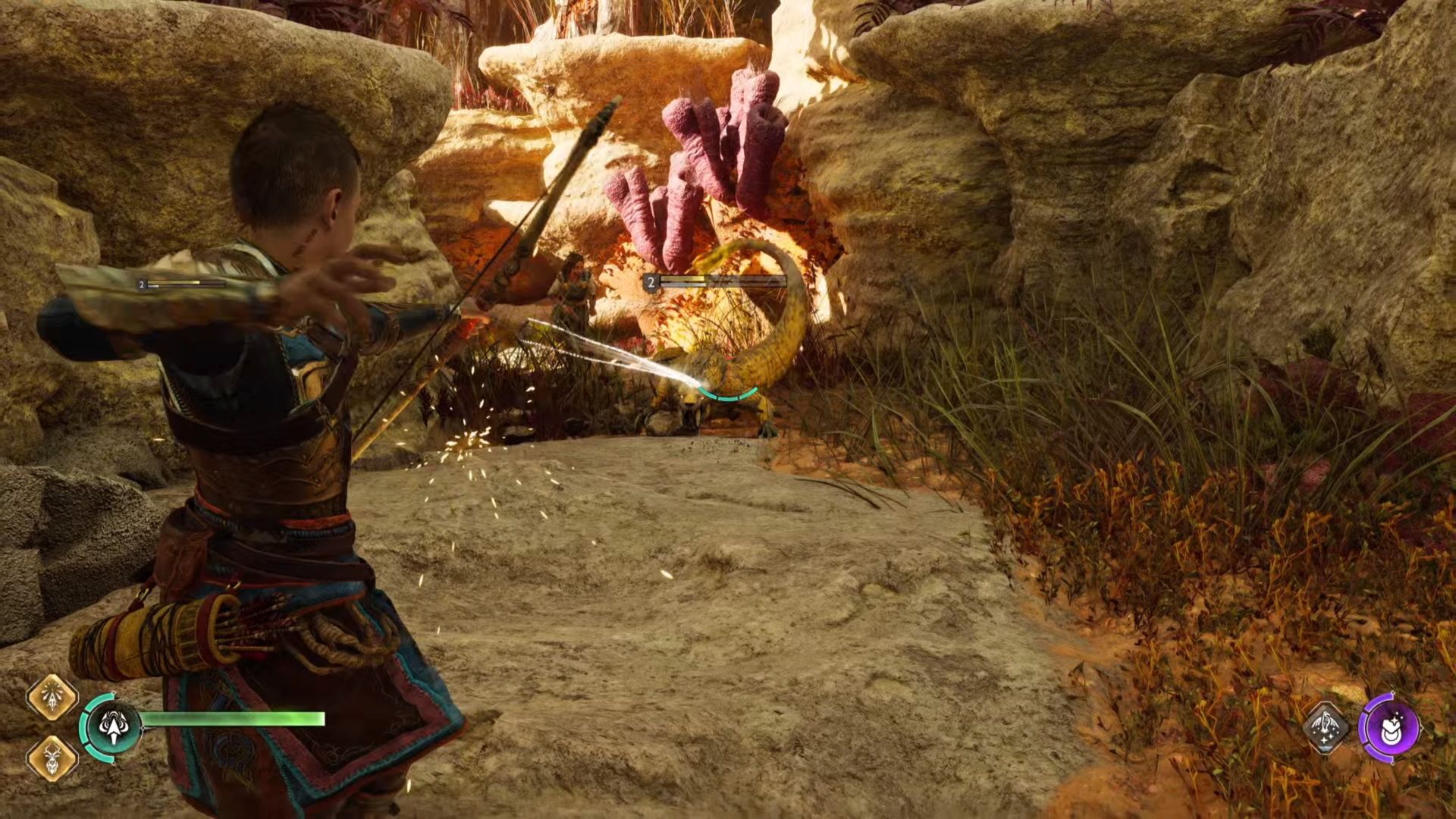 Continue down the path, and you will end up racing Angrboda (don’t worry about missing anything, there are no chests or items sneakily hidden away here that we saw). After the race, you are going to come across a huge mishmash of Tatzelwurms. Angrboda’s attacks all become unlocked at this point and you will be able to call her in for support. One great way to take care of the Tatzelwurms is to backtrack to where you entered the arena, creating a bottleneck, and making it easy to rack up the headshots (while assuring that you won’t get ambushed in the process). There are a couple of buckets hanging in this area with some nice crafting materials inside. Make sure to shoot them down and grab the goods! 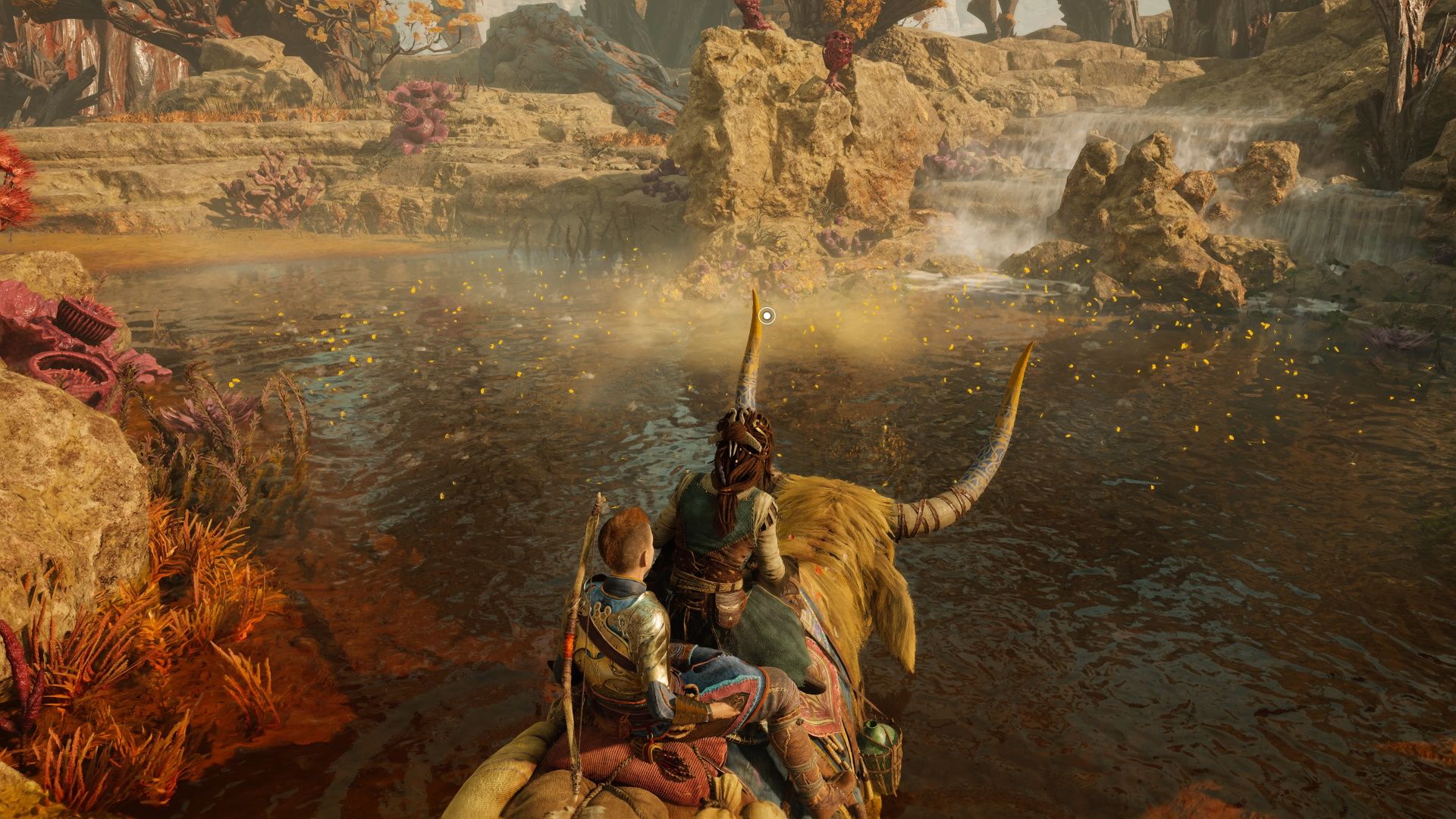 Now, follow Angrboda to her home. You will get some lengthy story segments before you start riding Jalla the yak through a marsh. While Jalla doesn’t control the same as a boat, many of the same rules apply here. Shimmering water means treasure, so look out for that. You will also see a shimmer coming from the mouths of the giant clam-like things. Once you get off Jalla, shoot them, and they will spit out treasures. Then go grab them. 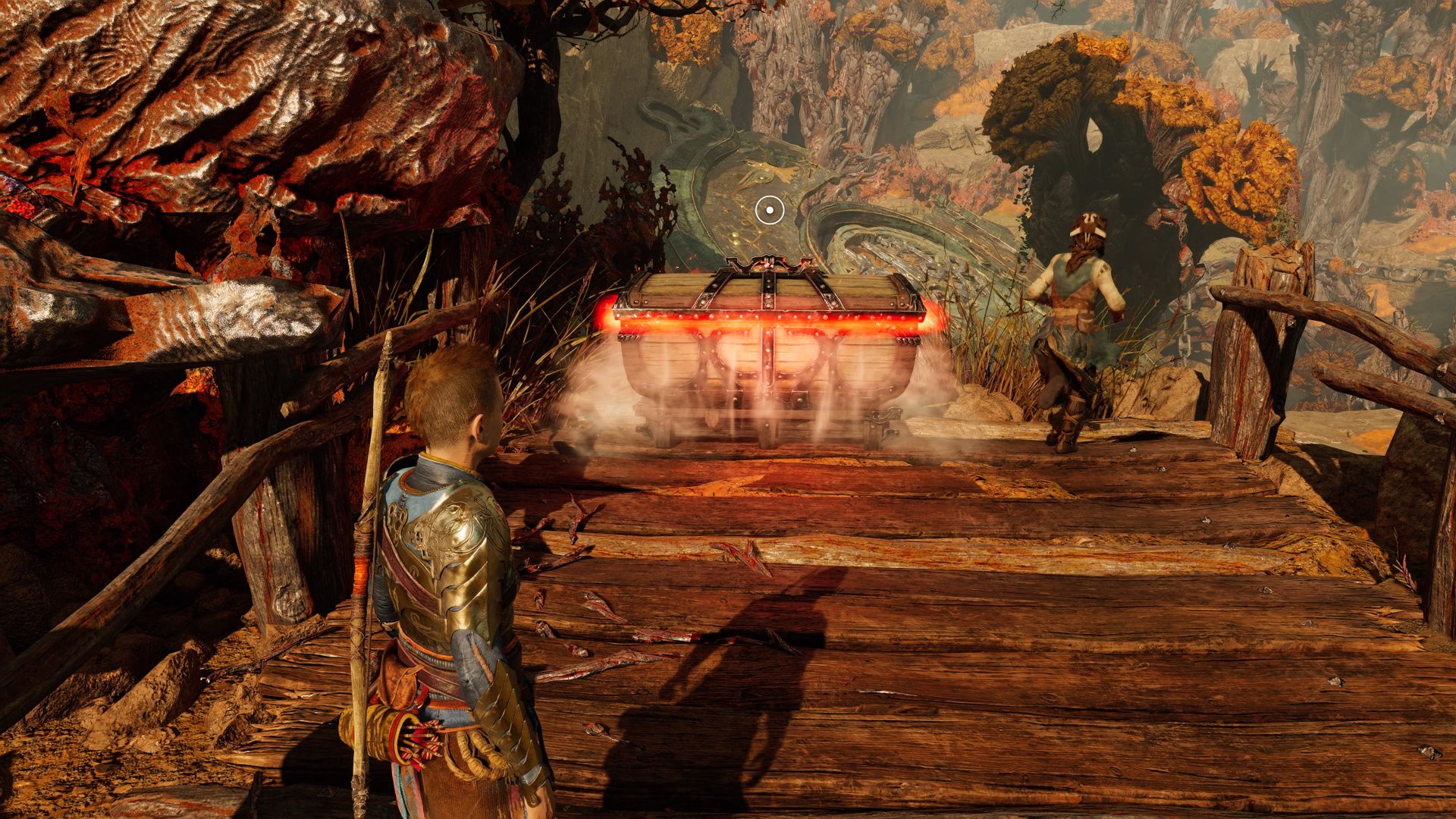 After you have collected enough fruit, you will return to the tree house. You will view some cutscenes before you venture out yet again. This time, you will be collecting roots. Unfortunately, you will be rudely interrupted by some Draugr. You will now gain access to Atreus’ shapeshifting abilities. After you finish off the Draugrs, exit the arena through the hole they made. Don’t head straight down the path; go up the ramp Jalla came down from. There is a chest up here. 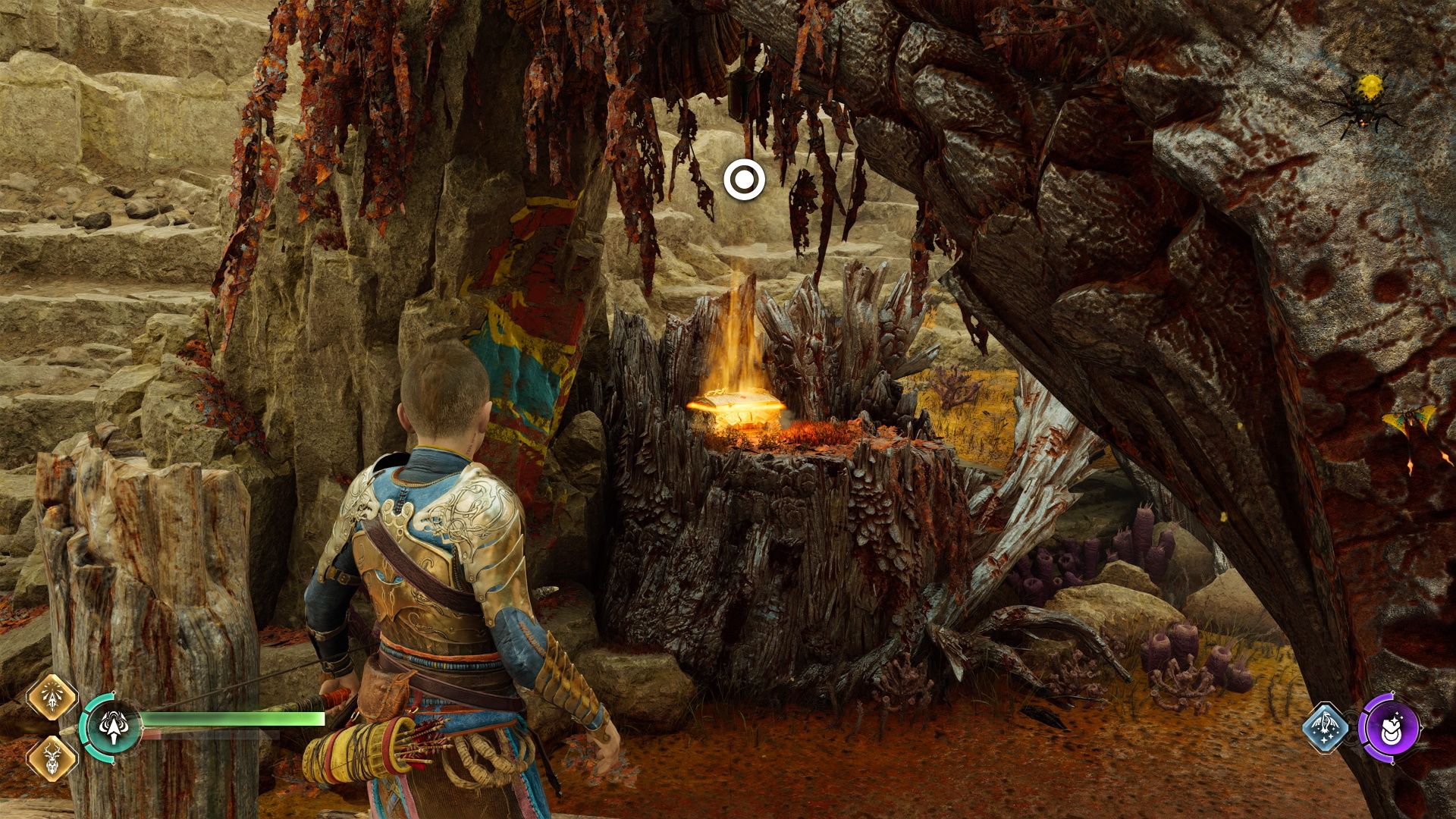 You will now head back to the tree house. Next, after dropping off the roots, there is one more yak run. You will have an opportunity to grab a chest right at the beginning of this one. It is on the main path; just hop off Jalla when you see it. Then, once again, you will have to fight a group of Draugr. Soon after you kill them, you will be back on that yak and in the water. There will be a platform on your left; hop up and grapple to the treasure chest across from you. Now, back on Jalla again.

Along the way, head to the left, and hop off Jalla when you find a painting. There is a relic to grab here. Hop back on Jalla and follow the path. After a lift ride, you will fight a few groups of enemies. The first group is just a few Tatzelwurms, the second is a huge brawl against a bunch of different Draugr types and a couple of Nightmares for good measure. 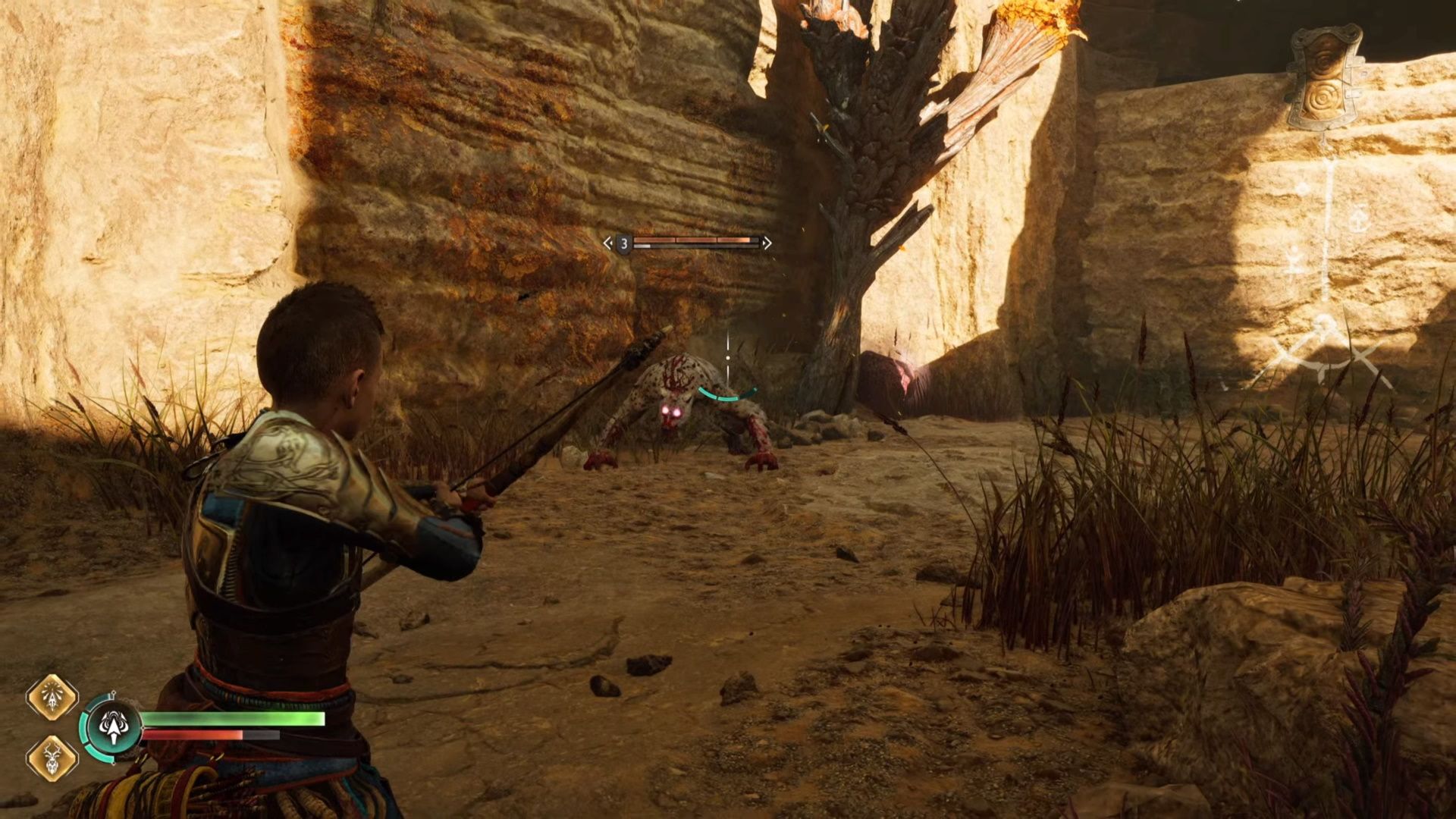 You will have another chat with Angraboda, collect a few marbles, and then engage in a one-on-one battle to the death with a Wolfman-esque Wulver. They have an unblockable lunge and a parryable swipe attack. When you do enough damage, they will start thrashing wildly as they approach you. You are better off keeping your distance instead of trying for any parry shenanigans. The strategy here is extremely simple. Back away, land headshots, and use your dodge roll when the creature lunges at you. This method will see you through this encounter with relative ease. However, don't get too cocky, if the Wulver does land a blow it will do a considerable amount of damage. 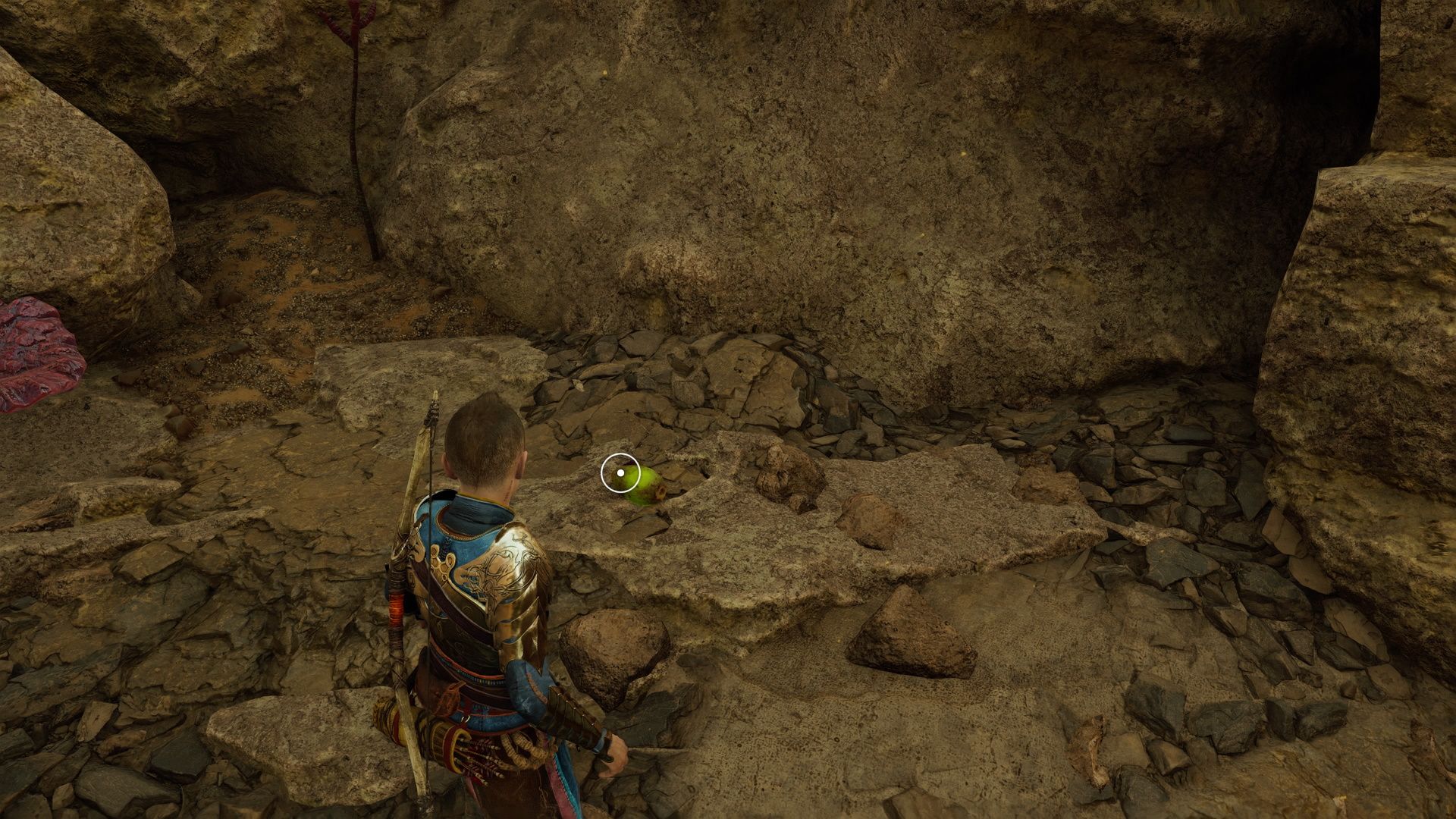 Once you take care of the wolf creature, hop up to Angraboda and follow her. Hang a left before the lift and grab the fruit. Then, when you are in the passageway, there will be a platform on your left. Up here will be another fruit to grab. You will now be back with Jalla again. Your adventure with Angrboda isn't quite over yet, but the rest will be the subject of the next guide.